What is the Advent Vega Tegra Note 7?

The Advent Vega Tegra Note 7 is a 7-inch Android tablet that joins the Nexus 7 2, the Kindle Fire HDX 7 as another affordable alternative to the iPad mini 2 Retina.
It’s born of a partnership between PC World and chip maker Nvidia,
which is why it uses both the Advent branding from PC World and the
Tegra name of Nvidia’s mobile chip. Nvidia is no stranger to venturing
beyond the realms of its graphics chip expertise as the Shield games
console shows, but the Advent Vega Tegra Note 7 is still an unusual move
and is the only sub-£200 tablet we know of that comes with a stylus. 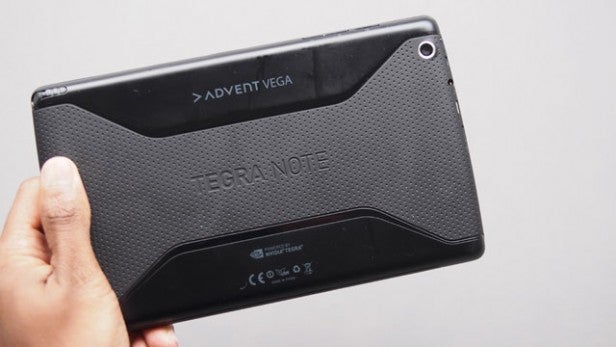 The
tablet-making business is not new territory for Nvidia. Its Tegra 3
quad-core processor powered the original Nexus 7 and its newer Tegra 4
CPU can be found inside Android tablets like the Asus Transformer Pad TF701T.
But this is the first time the company is taking a more active role in
the design of the hardware and the software running on it to show there
is more to Tegra 4 than smoother gaming and a zippier overall
performance.

It’s easy to see where the Note 7 gets its design
inspiration. It has a physical stature that makes it feel like a halfway
house between the Nexus 7 and the Nexus 7 2. The black bezel around the
7-inch screen is thicker than the one on the newer Nexus and the
decision to include dual front-facing stereo speakers at the top and
bottom of the screen actually makes it around the same height. It’s
slightly thicker (10.45mm vs 9.6mm) and slightly heavier (320g vs 290g)
than the Nexus 7 2, but not so much that it really matters. 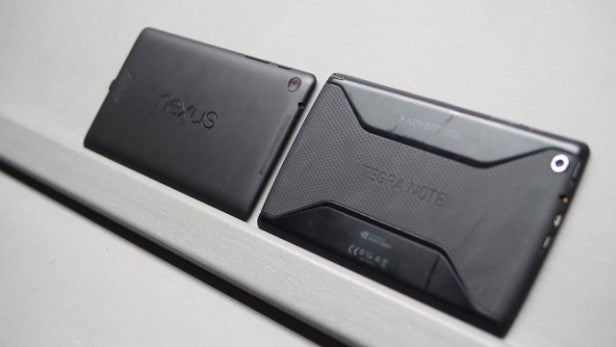 It
looks quite different from the back, however. Along with the
5-megapixel main camera sensor there’s a dimpled soft touch plastic in
the centre flanked by harder black plastic. While it’s not as
slick-looking as the Nexus 7 2, it’s very comfortable to hold and is
actually very accommodating for single or two-handed use. While the
7-inch tablet designs on the Kindle Fire HDX 7 and the Tesco Hudl promote landscape use over portrait, the Note 7 works well in both positions.

This
feeds into the layout of key ports as well. On the top edge you’ll find
micro USB charging port, micro HDMI, headphone jack and on/off button;
on the right edge you’ll find a Micro SD card slot and the volume rocker
just below. The stylus is hidden away in a Galaxy Note-like compartment
in the bottom corner so there’s less chance of losing it. They’re all
neatly positioned so that they don’t interfere when you don’t want them
to.

Overall the Tegra Note 7 is a nice-looking tablet, but
there’s still one or two signs of its budget nature all the same. The
back has a worrying creakiness to it and the micro SD card slot looks a
bit untidy left exposed and is easy to run a finger against it when
reaching for the volume rocker. These are relatively minor issues,
though. 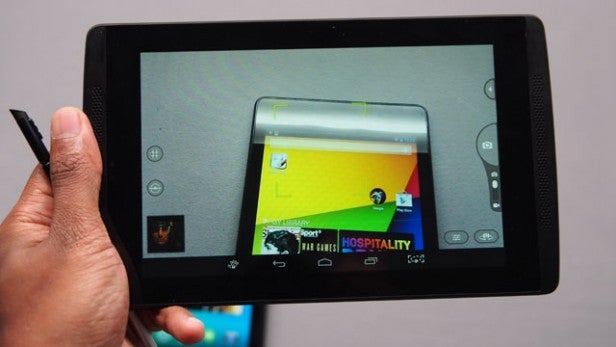 Of
greater import is the screen. The Note 7 features a 1280 x 800
resolution IPS display matching the screen specs of the original Nexus
7, but lagging behind the 1,920 x 1,200 resolution on the Nexus 7 2. The
216ppi pixel density means it’s lacking in the clarity department in
comparison to the new Nexus (323 ppi)

If this was a tablet
launched a year ago, we’d be more forgiving of a screen of this quality.
It’s not terrible but the truth is, it pales in comparison to the
Kindle Fire HDX 7 and Nexus 7 2 both of which prove you can deliver an
exceptionally sharp and vibrant display on a cheap tablet.

Text
is far from crisp, colours in videos often look pale and washed out and
white have a slightly warm, yellowish hue. You have the option to adjust
the Colour Correction preset in Display settings from sRGB to
Native to produce more consistent colours, but it’s very difficult to see a difference when you switch between the two.

It’s
not the brightest 7-inch screen we’ve laid seen, either. It’s a little
reflective to use outdoors and you can begin to notice the visible lines
that comprise the capacitive touch system. This all combines to make the Tegra Note 7’s screen a shade disappointing given it costs about the same as the Nexus 7 2, so it needs to impress in other areas to make up for it.

As noted above, the Note 7 is unusual for having two forward firing stereo speakers. The Kindle Fire HDX 7 and HDX 8.9
have set the standard for tablet speaker quality and while the Note 7’s
speakers are loud and bassy, it lacks the same level of clarity and
directional sound qualities of the Amazon tablets. It’s more than
suitable for gaming and video viewing, however, and is definitely among the better Android tablets out there.