The Note 7 runs on ‘pure’ Android 4.2.2 Jelly Bean with an Android 4.3 update expected in the near future and thankfully Nvidia did not decide to go down the heavily skinned route.

If you have picked up an Android tablet before, it’s a very familiar experience There’s multiple homescreens, app folders, widgets, Google Play access and Google apps like Gmail and Google Plus already pre-installed.

There’s a smattering of Nvidia software including the TegraZone, DirectStylus-supported apps and the Camera Awesome app that replaces the standard Android camera app. A dig around settings reveals there’s Wireless display support via Miracast and Bluetooth 4.0 on board, so it’s ready to work with Bluetooth game controllers and most other Bluetooth accessories. 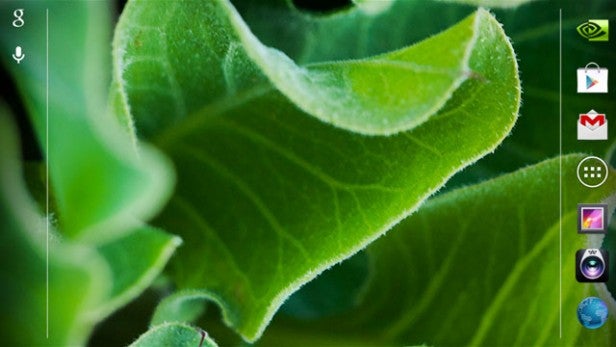 One of the most interesting additions is the power management tool to ‘maximize performance’. Essentially, you can choose how many of the cores in the Tegra 4 chip are used depending on what you are planning to use the tablet for. The Maximum Performance setting puts no restrictions on the number of cores in use, the Balance setting caps FPS (frames per second) to 60 for gaming and the Save Battery mode uses just 2 cores and drops FPS to 30.

It’s not something you see on a lot of tablets and if you remember to
select the right one, it can actually be really helpful for improving
the Note 7’s staying power when playing games a lot. 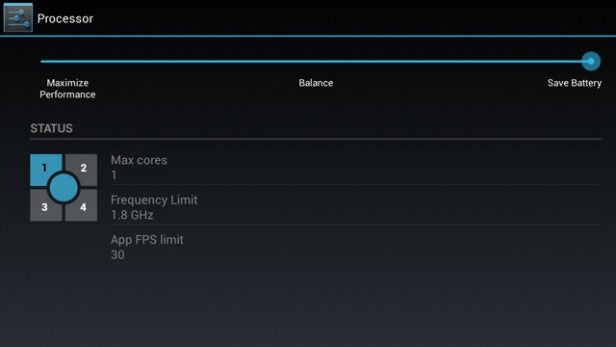 The stylus or more specifically the S Pen is helping Samsung shift its Note tablets and smartphones in the millions. But is also makes those same phones and tablets expensive due to the use of Digitizer technology. Nvidia is trying to make the pen on paper experience more affordable with its own DirectStylus technology.

It uses passive technology as opposed to the active pen technology used by Samsung’s S Pen. Taking advantage of the Tegra 4’s GPU prowess, the Note 7 can analyse different types of pressure on the capacitive touchscreen whether it’s your hand, finger or stylus. The DirectStylus supports up to 300 scans a second to deliver high levels of accuracy and low latency to mimic the fine tip of a pen, making it more accurate than the capacitive styli you can buy for iPads.

The black and silver stylus is heavier than the S Pen and has a rubbery angled nib to help create the swishing movements in characters. Up top there’s a hard rubber nib that can double as an eraser. And the stylus works extremely well. There’s little sign of lag and it feels as natural and accurate to write with as it is writing with Samsung’s stylus. It lacks the pressure sensitivity of the Samsung S Pen and eraser requires a little more pressure than we’d like, but for basic drawing and note taking it does a fine job. 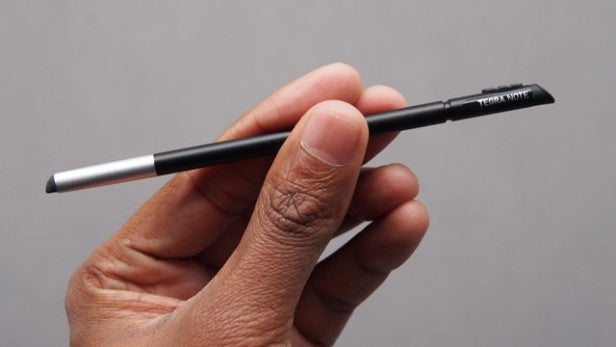 When you take the stylus out of its drawer, the customizable launcher pops up on the screen and initially gives you the option of two apps, Tegra Draw and Write. The first is pretty self-explanatory. You can doodle, pick from a colour palette, draw over pictures taken with the camera and most of the things you’d expect to with your standard drawing Android app.

Tegra Write is a basic-looking place to take notes. Two additional features pop up on the Android taskbar when the stylus is away from its compartment to improve the use of the stylus. There’s a palm rejection feature to prevent your hand from being registered on the screen as you write and a lasso function to cut out sections of drawings and notes or pretty much anything that’s on the screen. 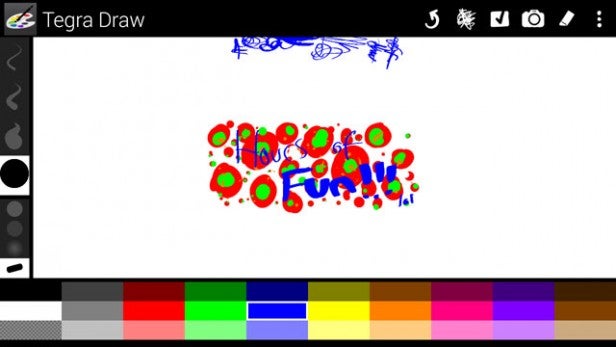 Everything that Nvidia has to offer with the DirectStylus makes it far superior to any of the capacitive stylus pens you currently see packaged with cheap tablets. It even works well with third-party apps like Photoshop and SketchPad, so you are not just restricted to the two pre-installed apps.

Just to reinforce the point that this isn’t standard capacitive stylus, the stylus doesn’t work nearly as well on a Nexus 7 2 — we noticed a marked increase in latency and loss accuracy. This makes the Tegra Note 7 a great alternative if you are not willing to pay a premium for a phone or tablet that uses Samsung’s S Pen.

While the new Nexus 7 has gone down the Snapdragon CPU route, Nvidia is unsurprisingly going with its own Tegra 4 CPU clocked at 1.8GHz alongside 1GB of RAM. The fifth companion core is an ARM Cortex A15 processor and aims to help conserve the Note 7’s battery life.

A 72-core GeForce GPU ensures it’s primed for gaming and that’s where the Tegra Note 7 truly excels. Without a higher resolution display soaking up the processing power, games like Real Racing 3 and Dead Trigger 2 run smooth and lag-free. In the 3D Mark Ice Storm Unlimited gaming benchmark test the Note 7 scored an impressive 16,483 compared to the Nexus 7 2 (11,672) to illustrate its gaming prowess. 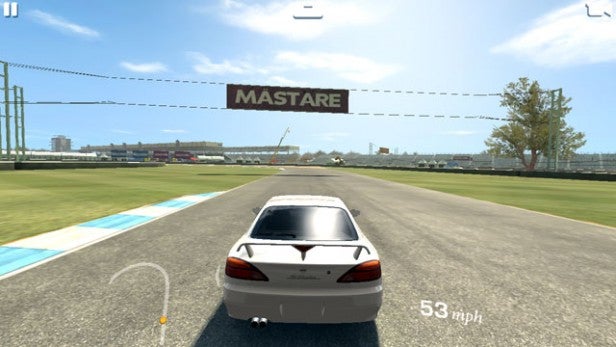 It’s no slouch for everyday tasks like browsing and video streaming either, and that’s supported by a Geekbench 3 benchmark score of 2,509. That’s slightly less than the Nexus 7 2 (2672), but clearly there’s very little between the two tablets. The Tegra Note 7 is one of the most powerful tablets we’ve played with and makes great use of the Tegra 4 CPU.