Intentional or not “Can’t innovate any more, my ass!” has become the
take away sound bite from WWDC 2013. It was uttered by marketing head
Phil Schiller as he introduced the unfinished redesign of Apple’s Mac Pro desktop. As he lauded a long dwindling technology category, it was also most poignant for the complete lack of irony.

WWDC 2013 proved itself to be many things. It was a veritable tick box list for long running iOS feature requests, it pushed boundaries in laptop battery life, it saw Apple finally enter the streaming music market, OS X was updated
(and given a silly new name), office and mapping services leapt to the
web and yes, it brought us a new PC chassis. But for everything WWDC was the one thing it wasn’t was innovative. 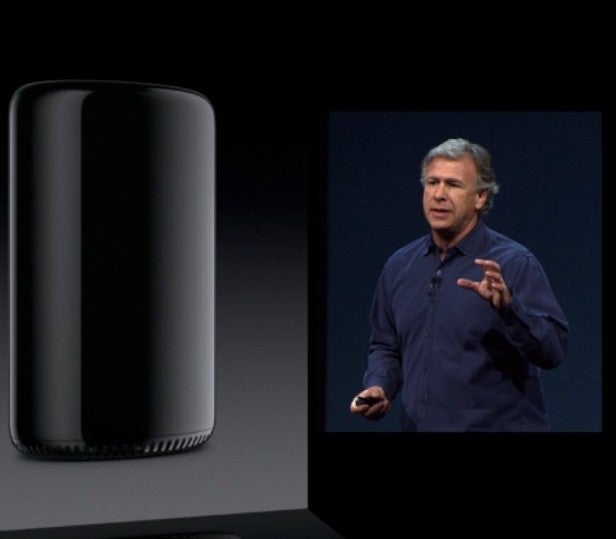 Imitation flatters rivals
I didn’t expect the earth. An iTelevision was never in my thoughts and I never truly believed a MacPad hybrid
would appear, but Apple TV developer apps or an iWatch would have been
nice as would some swipe typing Swiftkey-style. iTunes Radio could’ve
challenged Spotify instead of Pandora and if you’re going to recreate
iWork in the Cloud at least bring Cloud-specific features like the real
time collaboration offered by rivals.

Furthermore while in some
ways Apple should be applauded from bringing key elements of other
mobile platforms to iOS7 it didn’t bring the best. Automatic app
updates, proper multitasking, quick access to settings and redesigned
app UIs were all welcome and overdue. But ultimately users are still
stuck with a grid of static icons, the inability to change default apps
and the same basic notification system that has plagued the platform for
years.

Live tiles, the option of widgets, NFC support, and just
one thing we hadn’t seen coming would at least have jazzed things up a
bit.

Yes Google and Microsoft now face a platform which is
closer to them than it was 24 hours ago but – aside from the hard work
of its app community – it is difficult to see how iOS7 has done anything
more than repeat a worrying recent ritual of playing catch up as both
Android and Windows Phone again prepare major updates to leap ahead.

World Wide ‘Developers’ Conference
At which point the correct counter-argument would be “well duh!”.

WWDC
is for developers. It is to show them new software and technologies to
allow them to better develop for Apple platforms. With a new version of
OS X and 1500 new APIs in iOS7 Apple did this in spades. Right?

Not
exactly. To see WWDC this way is naive. The name may have stayed the
same since the first event in 1983, but since 2002 it has been morphed
into a launchpad for the company’s biggest announcements. New iPhones,
Macs, iPads, and iOS and OS X versions have all been launched there. The
same is true of Google I/O and Microsoft Build.

That said Apple clearly still has a big conference to come. August or September will no doubt see the new iPhone (or iPhones)
to launch with iOS7, an updated Apple TV (with apps?) and maybe even
the fabled iWatch or iTV. Apple will then be back on song. 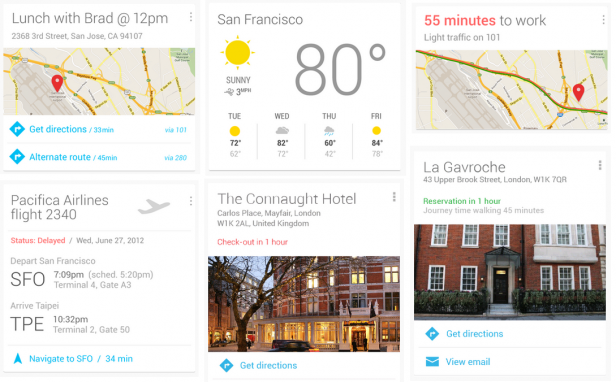 Can’t Innovate
And
yet I think not. For despite Schiller’s ‘can’t innovate any more, my
ass’ proclamation what I took from WWDC 2013 is Apple is increasingly
hamstrung. The problem is what defines ‘magic’ has moved on.

Apple’s
hardware and UI reveals are like watching an overly competitive dad
raving about painting his shed. Yes, yes, yes it’s better than it was
before.

Instead where the ‘magical’ leaps are coming today are
online and this is where Apple remains weakest. Aggregation of wide
ranging online services and global search data is currently driving
Google towards the head of the pack
and Apple looks to be suffering from years spent sitting pretty and
raking in fat profit margins on hardware and offline software.

The
fruits of Google’s labours are now producing models capable of
predicting user behaviour and it is hard to see how Apple could even
begin to counter an increasingly influential product like Google Now
(above). Facebook Graph Search
ploughs a similar route and Microsoft and Yahoo! (now run by former
senior Google exec Marissa Mayer) are treading these familiar paths.
Even Sony crows about seamless Cloud-powered gaming. Meanwhile Apple is licensing Bing and gushing about a desktop.

Apple must invest online
So how can Apple break out of its comfort zone and truly wow us once more?

The
logical route appears to be acquisitions. Apple is cash rich and
Spotify, Ask, Dropbox and even Yahoo! buy-outs wouldn’t do it any harm.
But as we saw with Apple Maps,
even the combination of purchasing and licensing data from no less than
nine third parties took years to collate and ultimately poor execution
damaged its name. But at least it now has a cross platform web service with Maps released online.

Fixing further holes would be just as
troublesome. Independence in search, for example, would be even harder
and risk stalling the company again and again. That said it may have
little choice. The differentiators rivals can bring online are growing
rapidly and Apple cannot respond. Apple finds itself beholden to
Microsoft for Bing, yet Windows Phone wants to catch iOS and could now
do so with an obvious Machiavellian move. No wonder all the Apple’s digs
this year targeted Google and pretty much let Microsoft off scott-free.

Which leaves Apple in the scenario it faced last night and has been for the last few years: treading water while it hopes to pass off
pragmatism as magic. Since mindsets shift slowly the trick still works.
Shiny hardware and resprayed feature-assimilating software has largely drawn praise and more will follow for the iPhone 6 and iPad 5.
But year-by-year these reveals feel more hollow as Apple’s options for advancement constrict and it struggles to match rival innovations derived from online services.

Apple
has long been known for its bravery and risk taking. If it wants to
create yet another magical product the company must fully embrace the Web and be braver and risk more than it has ever done before.