Mac hardware manager Douglas Brooks got Apple fans excited this week. He allegedly told a customer to expect “something really different” from the company’s new Mac Pro line-up, which is expected to be unveiled at WWDC 2013 on 10 June. MacBook Pros don’t get me excited, though. What tickles me is the thought of Apple finally doing for the laptop-tablet hybrid what it did for the mobile phone and tablet.

The MacPad
Here is the vision I see: the fusion of an iPad and a MacBook Air. The world’s most popular tablet and the world’s best-built laptop. The iPad brings the Retina Display the MacBook Air needs and the Air brings the detachable keyboard and industry leading trackpad. In tablet mode it runs iOS, in laptop mode it runs Mac OS X and iCloud seamlessly syncs productivity, media, gaming and core app data between them.

Imagine the scenario: use as a tablet on the train to work, as a laptop at work, a tablet on the way home and in front of the TV. Need a larger display? AirPlay would project the screen to a television or desktop monitor. Apple’s hybrid isn’t limited to a two-in-one, it can be a three-in-one. One device to rule them all.

The case against
But it won’t happen, this isn’t how Apple does things. Three main objections come to mind.

Dual boot. Apple may allow Windows to dual boot on Macs, but that is to satisfy users who may be lured by Windows. Typically Apple likes to keep things simple: each device has a specific role and a clear usage scenario.

Mac OS XI. Rumours suggest Mac OSX 10.9 isn’t far away and with it inevitably even greater crossover between it and iOS. But OS XI is where we would expect the major shake up to begin with extremely tight iOS integration, if not even a merger of the two platforms. If Apple were to launch a hybrid it would make more sense to wait until then.

All three reasons above are logical, sensible, safe and likely enough to nip any idea of a hybrid in the bud. But there are innovative, exciting and risky counter points to each…

Progress means cannibalisation. When Steve Jobs announced the first iPhone he joyously proclaimed to the crowd he had three devices for them – “a widescreen iPod with touchscreen controls, a revolutionary mobile phone, and a breakthrough internet communications device”. He repeated the phrase over and over, before saying “are you getting it? These are not three separate devices, this is one device.”

In launching the iPhone, Jobs knew sales of the iPod – then Apple’s most successful product – would be cannibalised, but he knew the market was changing and he bet the company the mobile phone was the next opportunity area.

Jobs and Apple did it again with the iPad. The tablet had long been a glorious concept no-one had quite gotten right and he risked the cannibalisation of cheaper Macs, MacBooks and even iPhones by betting on tablets. Jump to today and – with the exception of the US – iPhone and iPad market shares are slipping around the world. The hybrid in 2013 is like the smartphone in 2007 and the tablet in 2010 – unrealised and ready to take the next step.

Mac OS X & iOS need merging. Whatever your opinions on Windows 8, it is hard to fault the ambition of Microsoft’s schizophrenic OS. Desktop and mobile platforms are merging. Microsoft has taken its first step and Google continues to unify functionality between Chrome OS and Android. Apple is doing the same with each iteration of Mac OS and iOS, but right now it has no product to truly exploit such a merger. The hybrid fulfils this role.

Of course dedicated desktops, laptops and tablets will exist for many years yet, but they are forms that don’t drive the necessary advancement of a single OS or excite users about its potential. The hybrid can, and if Apple can enter this market as successfully as it did with phones and tablets the ‘hybrid’ won’t be a category any more. It will become a universal usage expectation. Every form of computer will be a hybrid, morphing its usage as required via a single, flexible, Cloud-synced platform. That’s the next step of computing and hybrids can drive it. 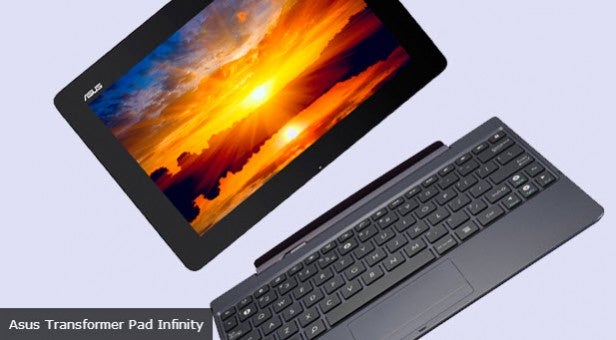 Standing still is not an option. When the iPad and iPhone launched there was nothing quite like them on the market. This window of opportunity has already passed with the hybrid and – while no-one has mastered it – Computex demonstrated only last week that models like the Asus Transformer Pad Infinity are getting better with every generation.

Haswell is a big factor in this. Intel’s fourth-gen Core architecture brings the hybrid both power and great battery life. Tablets and their power-efficient software always had the latter in particular to keep them safe from the hybrid, but not any more.

Apple still has the platforms, street credibility and platform-wide integration through iCloud to pull off a hybrid with better execution than any to date. But Google is inching closer and scores more Windows 8 hybrids will arrive over the next year. And by the end of this year the Microsoft ecosystem will see Windows 8.1, Windows Phone 8, the Xbox One and SmartGlass all playing nicely together. Apple needs to act now.

WWDC 2013
Despite all this it is safe to say WWDC 2013 is highly unlikely to see Apple step into the hybrid market.

The teased “something really different” will be the adoption of Haswell to make existing Macs and MacBooks faster, slimmer and lighter and to give the latter better battery life. Meanwhile iOS7’s impending redesign will only put the pressure on Mac OS to take time out to realign all graphical elements with its mobile counterpart.

These all feel like baby steps, iterative advancement while rivals gain experience through radical concepts that become ever more appealing with each hardware and software update.

Apple has traditionally excelled through leading not following. When Tim Cook takes to the stage next week the child in me will be hoping for a hybrid, unveiled after the too long absent phrase: “One more thing…”

Next read what we expect to see at WWDC 2013