iOS 7 for iPhone 4, iPhone 4S, iPhone 5, the rumoured iPhone 5S and 5C is almost here. Here’s the best features to look out for.

Unveiled at WWDC 2013 back in June, iOS 7 is the most significant re-vamp of the iPhone operating system since it launched back in 2007. Much of the talk in the build up has centred around iPhone designer Jony Ive taking a central role in revamping iOS and making sure it doesn’t fall behind Android and Windows Phone.

As the iOS 7 gets set to be unleashed alongside a couple of new iPhones, we take a closer look at what’s new for the latest version of Apple’s mobile operating system.

Apple has finally decided to give iOS a proper redesign. iOS has looked almost identical update-to-update since the system first arrived back in 2007. That’s when the first iPhone launched – aeons ago in tech terms.

A core part of the redesign is new icons. All the old designs have been ditched in favour of a new look. The outline-heavy style of previous versions has gone, in favour of a more supposedly chic look.

Who is behind this new version? It’s Jonathan Ive, the man who was behind the hardware design of the iPad, iPhone and the original iPod – which made its debut in 2001. He’s an Apple veteran.

It’s not all about icons, though. All of Apple’s own apps have been given a new simplified tweak, including Email, the camera app, the browser, the photo gallery and – arguably the most important of all – the Apple keyboard. 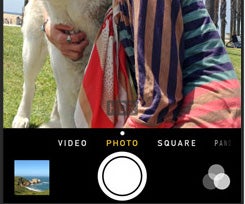 The Camera app of iOS 6 has been completely
redesigned for iOS 7. In previous incarnations, the iPhone camera app
was the simplest mobile phone photo interface of them all – just giving you access to an HDR mode,
panorama, and the grid (seldom-used).

iOS 7’s camera app is
completely different. Apple has realised that iPhone users love things
like filters and the ability to easily share their photo history with
friends.

The iOS 7 camera app now offers eight hipster-friendly filters, and you can remove them after having applied them if you like.
There are now ‘photo collections’ too, which amass your photos into a
timeline that stretches over days, weeks, months – and even years.

Apple
is clearly out to blast services like Instagram into the past with iOS
7. Your photos are shared on iCloud, Apple’s cloud storage service. 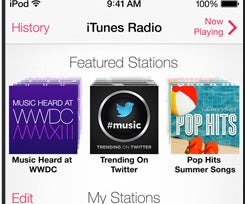 One of the most fun additions to iOS 7 is iTunes Radio. It’s a Last.fm-like service that lets you listen to music for free.

However – like Last.fm – you won’t have full control over what you listen to. It is free, after all.

It
learns your tastes over time, or you can listen to an ‘artist’ radio
station. Here’s the bummer, though – iTunes Radio is currently only
available in the US, probably thanks to licensing issues. Yep, we’re disappointed
too.

Previously you had to head into the Settings menu of an iPhone or iPad to access this features. iOS 7 is happier to use gestures to get you where you want to go, quicker.

This control centre panel is accessed by dragging up with a finger from the bottom of the screen. Here’s where it really differs from Android – with Google’s OS you drag down from the top of the screen to access these features in most phones.

However, Apple’s iOS 6 alerady did use an Android-like drag-down menu for notifications, and that has not disappeared. It has, predictably, been redesigned.

It functions much as it always has, but the  new ‘flagship’ feature is a run-down of all your updates of the day. This will include text messages, tweets shared photos and so on. When looking at future daily updates it’ll also show you calendar events and the weather. And all with that new Jonathan Ive style too. 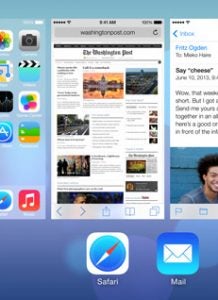 Multitasking has been completely redesigned in iOS 7. Instead of just showing you icons of apps you’ve recently loaded, you’ll see shrunken previews of what’s on-screen, similar to those seen in the near-defunct Palm WebOS.

Apps will now learn when you search for updates in your daily schedule. So if you look at Facebook every day at 9am, your iPhone will update that app just before that, so you’re ready to see all your friends’ latest inane insights.

The idea is that this will help iOS 7 to save a bit of battery, so it won’t have to look for updates 24/7. iOS 7 will also capitalise on Wi-Fi connections, updating all its content when connected in this manner – Wi-Fi uses less battery than 3G.
We’ll have to see how this works in person.

Apple has been criticised by many for not including NFC in its latest devices. The iPhone 5, the iPad 4? No NFC.

The iOS 7 stop-gap is AirDrop. This uses Wi-Fi Direct and Bluetooth to let you share files – primarily photos, contact and videos – with people nearby.

If anything, Bluetooth and Wi-Fi are actually superior Wi-Fi standards for this purpose as their ranges are far greater than NFC, which peters out after about 10cm. You’ll still have to select a contact to send files too as well, so you shouldn’t find random strangers sending you photos either. 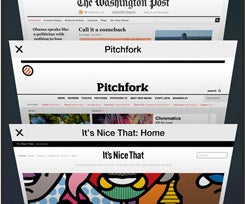 The Safari browser of iOS has been given a long-needed overhaul. In common with the rest of iOS 7, it now tries to keep things simple, with an interface that hides interface elements until they’re needed.

Its tabbed browsing view has also been changed. Rather than appearing as flat planes, they appear as 3D animated tabs – five of which can be shown on-screen at once.

Safari now uses iCloud too, letting you save your passwords and logins so you don’t have to type them in every time. And, for the social networkers out there, you save your ‘reading list’ URLs and share them over Twitter if you like.

iOS 7’s Siri is a little more advanced than before. Most of the updates are ‘experiential’, meaning you should only notice it’s better without necessarily realising why. There’s more feedback about when Siri’s listening and not. You no longer have to guress.

Siri should no longer have to leave the Siri app, either. Apple has done a deal with Wikipedia that will see the voice assistant search Wikipedia within the app, so it should almost never simply dump you out to a web search.

Next, read our Apple iPhone Event 2013: Predictions and what to expect