A cheaper-feeling iPhone – never has something so drab-sounding been so anticipated.

Rumours of a budget iPhone have circulated for years, but only recently have we begun to take them seriously. Reports of the phone are surfacing ever-more frequently, and the iPad mini demonstrated that Apple is in reactive mode these days. It’s no longer the auteur it once was.

The iPad mini was the first reactive Apple product in years. And it has proved a smash, with analysts forecasting higher sales of the iPad mini in 2013 than its bigger brother.

Reactive is the way, and there are few more reactive moves for Apple to make than producing a lower-cost iPhone.

But what will the cheaper iPhone offer? And when will it arrive?

Timing is important. If not merely a fabrication of internet speculation-mongers, the cheap iPhone will either arrive alongside the iPhone 5S or out of the standard iPhone release cycle.

Macotakara wrote back in June that the iPhone 5S is likely to arrive in July. It’s a month to flag in your calendar if you’re after a cheapo iPhone.

However, we in the UK may never get hold of the phone. The main purpose of the budget iPhone will not be to snag more Apple fans in the UK, but to make phone series viable in countries where it currently is not.

Where are these places? Recently, the NYTimes took part in some research to find out.

There are reportedly seven countries/areas where mobile underdog Windows Phone outsells the iPhone – something unthinkable in the UK. Price is just one reason for this, but it’s a damn important one.

The countries are Russia, India, Ukraine, South Africa, Argentina, Poland, and a bunch of smaller countries in Central/Eastern Europe. Add the populations of these countries together and you’re looking at well over 1.5 billion people that haven’t been properly exposed to iPhone mania. The poor dears.

A cheap iPhone could theoretically up-end Apple’s current approach to market domination. To date, it hasn’t striven for a gigantic device stake in the mobile market, but it does have an incredible share of its revenue and profits. In Q4 2012, Apple raked-in 72 per cent of all the mobile market’s profits from just 22 per cent share of actual devices shipped.

A cheap iPhone could see that second figure skyrocket.

The cheap iPhone does make sense. But what will it be, exactly?

It won’t be that cheap, for one. In January, Apple’s marketing senior vice president Phil Schiller spoke out to say “cheap phones will never be our focus.”  And he means “cheap” in a more pejorative sense than we do. Ultra-budget is not an option.

A continued promise for quality rules-out being able to offer phones at the price Androids can reach. Think £200, or £250, more likely.

As such, the cheap iPhone may be compared to the Samsung Galaxy S3 Mini – although let’s hope it’s better than that whimpering disappointment.

The most common way cited to keep the phone half the price of an iPhone 5 is making the thing out of plastic rather than metal. The Wall Street Journal says a cheaper iPhone has been brewing in Apple’s labs for years.

A casing for the cheap iPhone has just been leaked by Tactus too. Tactus is a maker of accessories. This gives the company both a believable route to getting hold of a casing, and a bit too much to gain from a well-publicised leak. Handle this body rumour with care. 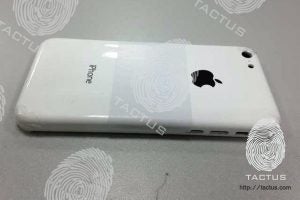 Tactus says the case suggests the plastic iPhone will have a 3.5-inch screen, be 9mm thick and have a camera with a flash.There’s one extra detail that suggests the cheap iPhone may make it to the UK after all – Tactus says the phone will come in five colours, suggesting it’s aimed at kids as well as countries with a per capita income much lower than the UK’s.

This leaked plastic iPhone is most comparable to an iPhone 3GS, although it’ll have a much more recent chipset – most likely an Apple A5 variant. It’s sensible, it’s safe. But in Apple world, it’s crazily dynamic.

Cheap iPhone – Worth Waiting For?

Those who buy iPhones every year or too may ask – what’s the point of an iPhone that doesn’t look or feel expensive? However, the key aim for the phone is to be able to bring iOS in phone form for the price of an iPod touch. Let’s not forget there’s a billion-strong market that this phone is aiming for.

We’ll be back with more news of the cheap iPhone soon.