After spending our first two days of a five-day trip to meet Sony in Japan checking out the wonders of the VW1000ES projector and Sony’s professional OLED monitors, as well as getting in-depth with Sony’s X-Reality Pro processing and latest online features, our next two days were spent with some seriously intense cross-brand TV comparisons and some very cool new home cinema and network audio gear.

The TV brand comparison seminar kicked off our third day – and as a couple of the fellow journalists in our group discovered to their cost, it was not exactly an ideal event to take part in if you were feeling a little ‘worse for wear’ after a few drinks the night before… 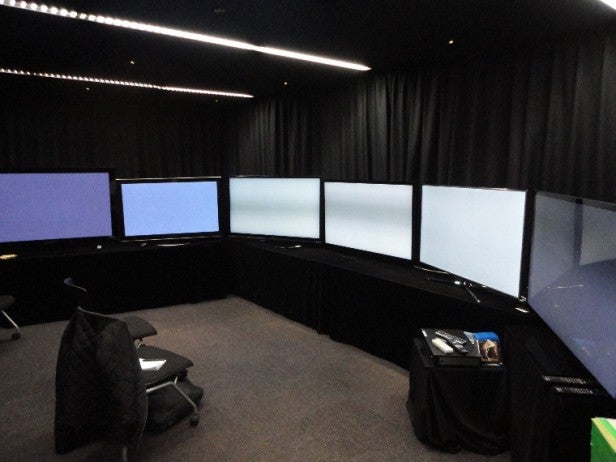 As we would soon discover, the positioning of the Samsung between the two Sonys was no accident, as the Korean set proved to be clearly the model the demonstration was most ‘out to get’.

What followed over the next 90 minutes or so was a dizzying and at times nauseating array of test signals fed into the screens to show off everything from black level response to motion control, colour handling/gradation, sharpness, response time, shadow detail and on-the-fly contrast adjustment.

All TVs had been set – so we were told – to their ‘Movie’ or equivalent preset modes. And we have to say that so far as such cross-brand ‘shootouts’ by manufacturers can ever be trusted (and bearing in mind that the rival sets were all from the relevant brands’ 2011 ranges), the two Sony models came out on top on almost every single test.

With colour gradation in particular, the Sony models appeared far better than any other model on show – including the Kuro, which actually fared quite badly in this respect, showing up considerable amounts of colour ‘striping’ rather than smooth blends. The Sonys also responded much better to rapid contrast adjustments than their LCD rivals, and delivered a better black response too. In fact, they even arguably outgunned the Panasonic plasma for black level – irrefutably so when the lights were raised, causing the phosphors in the plasma screen to react and appear brighter.

It was especially pleasing to note how good the black levels were on Sony’s new HX853 model, with its edge LED lighting. And there was nary a trace of backlight inconsistency either.

Motion, too, looked excellent on the Sony models – especially when using a new ‘Impulse’ motion processing system new to 2012’s TVs that essentially repeats each image frame four times. This also looked effective when watching normal video sources such as The Changeling and the final Harry Potter movie at the end of the session.

One of the most memorable things about the genuinely persuasive ‘shoot out’ of TVs in this seminar was how poor the Samsung model looked compared with the Sony models either side of it. But actually this isn’t really that much of a surprise, as we’ve said time and again in our reviews that Samsung TVs need to be calibrated away from their mostly terrible presets – the demos used the set in its default Movie mode –  before they get to be anywhere near their best. We were actually kind of sad Samsung wasn’t there to witness the humbling of its 2011 flagship, as it might have finally made the brand include an actually helpful preset on its 2012 models.