Having had a bizarrely mixed experience with Sony TVs this year, we’re feeling optimistic about the brand’s KDL-46HX923. After all, this is Sony’s flagship 46in TV, so if any TV is going to show what the brand is capable of when it pushes the boat out, it should be this one.

It certainly looks the part. Its fascia is a gorgeously smooth, seamless one-layer affair with a jet-black bezel and a subtly but attractively (and optionally!) illuminated Sony logo in the centre of the bottom edge. Sony calls this look Monolithic, and we like it. A lot.

The 46HX923 is a bit fatter round the back than most of Sony’s Monolithic designs. But given that we tend to look at TVs from the front this design ‘issue’ doesn’t necessarily bother us that much. Especially as the 46HX923 has a very good excuse for its slight extra bulk, namely that it uses direct LED lighting rather than edge LED lighting. 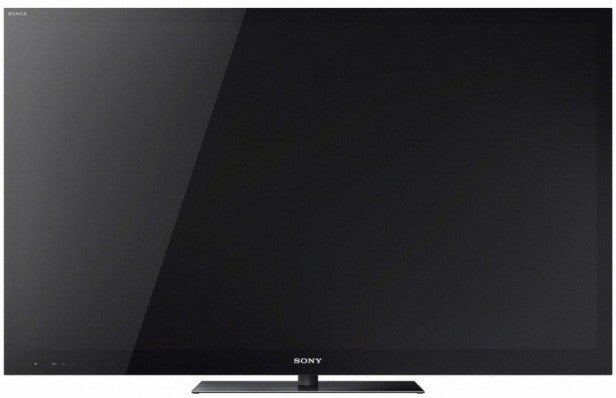 Experience suggests that this is very good news, as having an array of LED lights directly behind the screen rather than around its edge has consistently delivered a richer contrast performance – especially when, as in the 46HX923’s case, you’ve got a system like Sony’s ‘Intelligent Peak LED system to deliver local dimming, whereby different areas of the picture can be illuminated to separate levels to boost contrast.

As we would expect of any flagship TV this year, the 46HX923 supports 3D playback. And this is full HD active 3D, complete with two pairs of active shutter 3D glasses thrown in for free. 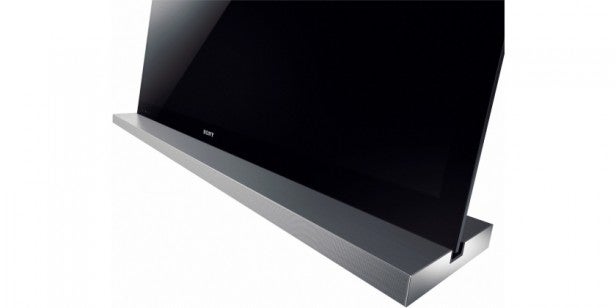 That’s not all Sony is currently giving way with the 46HX923, either. For a start, if you submit a claim form before 31st January 2012 you’ll be entitled to £150 cashback (please note that this discount is included in the £1,649 price we’ve quoted). But also you can currently get the 46HX923 with a free Skype camera accessory and – best of all – with a free PlayStation 3 console, the Unchartered 3 game, two Harry Potter 3D Blu-rays, and vouchers for Harry Potter 1 & 2 on Video Unlimited.

The PS3 PS3/Unchartered 3/Harry Potter deal only runs until 12th December, though, so if you’re interested, you’d better get a shift on.

Actually, this apparent – if temporary in some cases – generosity from Sony is pretty important in trying to make the TV look fair value in these hard times, given that it’s considerably more expensive than your average 46in TV. But then we still strongly believe there should be a place in the TV market for genuinely premium TVs, so long as they deliver something unique or particularly brilliant. 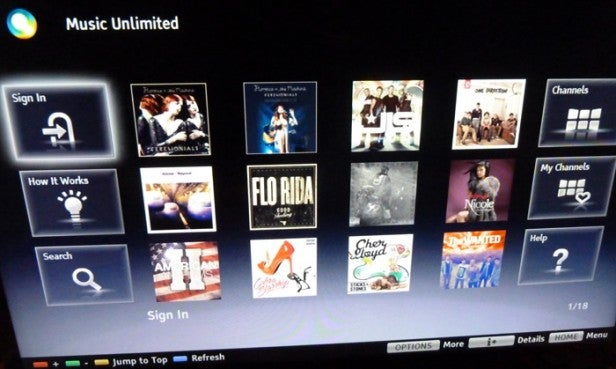 Another key element of the 46HX923’s proposition is its Bravia Internet Video support. This online Sony service is arguably our favourite online TV offering, simply because of its strong focus on delivering on-demand video services such as LoveFilm, Sony’s Qriocity film library, the BBC iPlayer, the Demand 5 Channel 5 catch up service, a 3D content channel, and loads more besides.

Sony has recently added social networking tools to its BIV offering in the shape of Facebook and Twitter apps, plus there’s the already mentioned Skype functionality and a built-in Web browser. Though as usual, this Web browser isn’t exactly fun to use thanks to the sheer difficulties of trying to navigate sites and type Web addresses using the set’s (surprisingly bog-standard) remote control.

Sony is not one of those brands that likes to pursue endorsements from the likes of THX or the Imaging Science Foundation (ISF). But the 46HX923 still has plenty of calibration tools for those who like a good tinker. Options vary from being able to adjust the strength of or deactivate entirely almost all aspects of the TV’s video processing, to a colour management system, gamma correction, and white balance adjustment.

As usual we’d urge caution with the processing elements, especially the noise reduction and Detail/Edge enhancement tools. The MotionFlow system is worth trying with fast-moving footage though, at least on its Clear or Clear Plus settings. 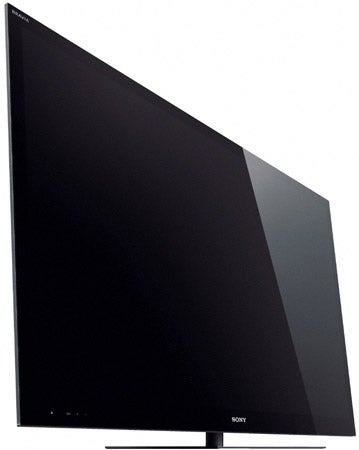 One final thing to rattle through before finding out how the 46HX923 performs is its connectivity. Highlights are four HDMIs for 3D and HD duties, two USBs, a D-Sub PC port and built-in Wi-Fi. The USBs can be used for recording from the built-in Freeview HD tuner, or for playing video, photo and music files from USB storage devices. And the Wi-fi can be used for streaming files from networked PCs as well as accessing BIV.

In assessing the 46HX923’s pictures, we unfortunately have to kick off with a weird glitch: the appearance of a shadowy line down each of the picture’s edges, about 6mm across and about 1cm from the picture’s edge. We really couldn’t hazard a guess as to where this line comes from, though it’s not the first time we’ve seen it on a 2011 Sony TV.

It should be stated strongly that you can’t always see the lines, and that even when you do they tend to be faint. Also, of course, more often than not your attention will be focussed on the centre of the image rather than its extreme edges. But the lines are there, you can sometimes see them, and if you’re got an even slightly obsessive nature, you might find yourself starting to look for them. 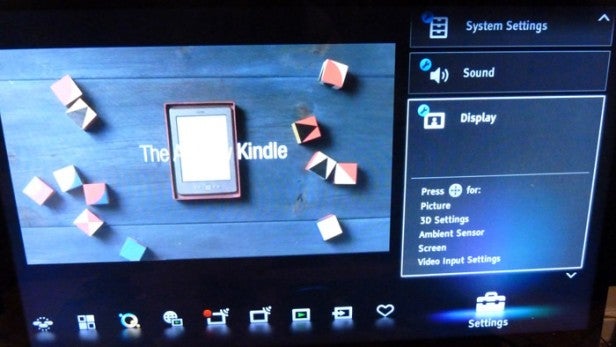 Another more understandable issue that may trouble some is the appearance of faint ‘clouding’ around very bright objects when they appear against dark backdrops. This is a simple result of the number of controllable LED clusters behind the screen not matching (even closely) the number of pixels in the image.

The obviousness and the extent of the haloing is less overt than it is on LG’s recently reviewed, also direct LED 55LW980T, but it is still sometimes visible. Especially when viewing from a side angle.

One final negative comment would be that despite the TV providing ‘off’ and ‘low’ settings for the set’s LED Dynamic Control system, using it on anything other than its Standard setting causes both a substantial drop off in contrast and the appearance of unexpected areas of backlight inconsistency. But this isn’t actually a massive deal given that we didn’t really see any great disadvantages to using the Standard dynamic control setting.

From here on in the news is almost exclusively excellent. For a start, while the 46HX923’s black level depth and consistency might not match that of a class-leading plasma TV, dark scenes are generally very convincing thanks to the way they combine a really good black colour with enough retained brightness to deliver lots of shadow detail in dark corners.

The local illumination potential of the Intelligent PRO LED system further ensures that dark scenes look every bit as punchy and dynamic as bright ones, as there’s no need to dim brightness levels across the whole screen to get a good black colour as you have to with edge LED and CCFL LCD technologies.

In fact, it’s in this extreme contrast and dynamic range that the 46HX923’s single biggest attraction lies, as it delivers even more punch than a top-quality plasma TV thanks to the terrific brightness the set can achieve when driving some of its LEDs at peak power at the same time it’s driving neighbouring LED clusters at very low power to deliver good black levels.

This localised approach to brightness helps the 46HX923 to be very eco-friendly too, earning it a Recommended award from the Energy Saving Trust.

The 46HX923 is also mostly brilliant when it comes to colour reproduction. For its extreme brightness potential is used to push colours off the screen in explosive fashion. Yet, just as importantly, with the exception of some slightly warm-looking blue tones the 46HX923’s colours retain real authenticity, subtlety and credibility, despite their ‘aggression’.

Colour blends appear during HD viewing without striping or blotching too, contributing to a sense of purity and HD clarity that’s built on superbly by the TV’s exceptional sharpness and fine detail reproduction. What’s more, this superb clarity remains intact even during quite frenetic action scenes, thanks to both a presumably very low response time in the panel itself and the really impressive abilities of the MotionFlow system, should you opt to use it (following the guidelines mentioned earlier). 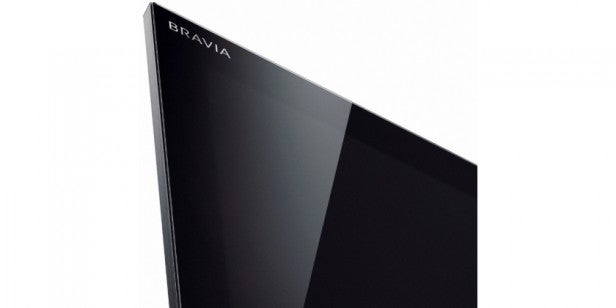 The 46HX923 delivers its HD sharpness, too, without leaving the picture looking noisy or edges looking forced. In fact, aside from the rare occasions where you can make out the shadowy lines at the screen’s edge, its HD pictures are to be congratulated for how intensely natural they look, allowing you to form a really direct attachment to them.

Yet more good news finds the 46HX923 retaining colour and contrast from a notably wider viewing angle than most LCD TVs (though you can see the ‘haloing’ problem more from a wide viewing position), while standard definition pictures are upscaled quite nicely too, at least in terms of the way compression noise is eliminated from the image.

It must be said, though, that colours aren’t quite as natural and well balanced with standard definition sources as they are with HD footage, and the suppression of noise results in upscaled images not looking quite as sharp as we’ve seen them on other top-end TVs.

The last element of the 46HX923’s picture performance to consider is 3D. And in some ways it’s a rip-roaring success, delivering images of really impressive depth, huge amounts of full HD detail, and exceptional brightness and colour richness by active 3D standards.

However, the 46HX923’s 3D apple cart is upset by the occasionally very noticeable appearance of crosstalk. This double ghosting phenomenon is visible to some degree in almost every frame of 3D we watched on the 46HX923, though it’s subdued enough during bright scenes not to really count as a distraction. During dark scenes, however, backdrops to dark scenes can look so afflicted with crosstalk that they seem completely out of focus. 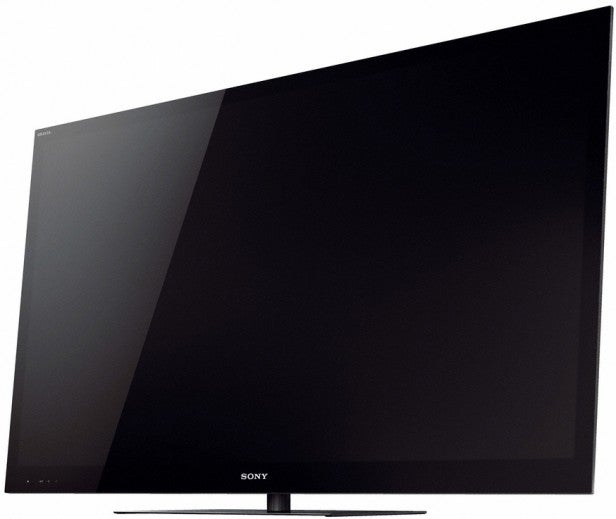 A second, much smaller niggle about the 46HX923’s 3D performance is that the picture becomes tinged with red or blue if you tip your head even slightly to the left or right.

The 46HX923’s sound is actually pretty respectable for a slim TV. It can go pretty loud without distorting or causing the cabinet to rattle, and there’s a slightly deeper sense of bass than you commonly hear, making action scenes sound more impactful. Trebles can sound a touch harsh and the upper register of the mid-range can become a bit overloaded under stress, but overall our ears felt pretty satisfied.

Verdict
There are times when we loved the 46HX923, as it served up pictures of rare punch, sharpness and vibrancy. At its best the 46HX923 is comfortably Sony’s best-performing set of 2011, and so we hope Sony perseveres with direct LED technology in 2012.

We’re big fans of Sony’s BIV online system too, and the free PS3 deal in place at the time of writing is a boon.

Ultimately, though, when you’re talking about a flagship 46in TV costing more than £1600 even after the current £150 cashback offer has been taken into account, the appearance of at times quite severe crosstalk with 3D is unfortunate to say the least, and the slight cloudy haloes around bright objects and vague lines down the picture’s sides don’t help either.