Samsung kicked off the whole 3D ‘ruck’ last year in typically bold style with its C8000 TV series. This combined sensational design with cutting-edge 3D tech and a much-improved online service. Which is, um, exactly the deal on offer from this year’s D8000 series, as it happens!


Don’t take this to mean that Samsung has just been sitting on its hands since the C8000s were launched. On the contrary, in surprisingly many ways the D8000 series – as represented here by the huge 55in UE55D8000 – is a sizeable step forward from its predecessors.


This is particularly true where design is concerned. For Samsung has sensibly realised that forever focusing on trimming down its TVs’ rear ends doesn’t necessarily make much sense when you consider that most normal folk spend the vast majority of their time watching their TVs from the front. The result is a TV that’s slightly deeper around the back than last year’s models, but which has practically no bezel at all. Honestly.


The ‘frame’ around the 55in screen measures a mere 5mm across, making it easily the slimmest bezel we’ve seen. It’s a marvel of engineering that becomes even harder to get your head round when you consider that the 55D8000 is driven – as with last year’s Samsung C8000 series – by edge LED lighting. In other words, somewhere under that minuscule, metallic bezel Samsung has found the space to tuck all the lights it needs to drive a 55in screen. The mind truly boggles. 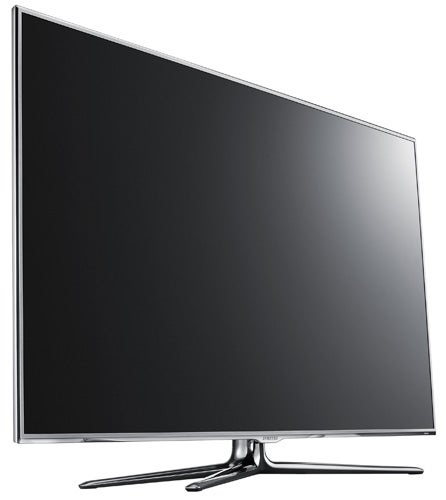 As well as making the 55D8000 stand out from crowded TV shelves, the nearly bezel-free design also, of course, enables the 55D8000 to occupy spaces that other 55in TVs might struggle to fit. Our experience with various 3D TVs to date, moreover, suggests that trimmer bezels can enhance 3D’s potential to immerse you in the worlds on show. We’re not entirely sure why this might be so, but suspect it has something to do with the way normal, chunky TV frames tend to create a false, two-dimensional border to the three-dimensional image shown inside.


The UE55D8000 is Samsung’s flagship 2011 TV (last year’s C9000 flagships are continuing rather than being replaced), so it’s no surprise to find it brimming with features. The highlight of which – from this writer’s point of view, at least! – is its new ‘Smart TV’ functionality.


We’re only too aware that not everyone is exactly bubbling over with excitement at the arrival of Smart TVs, with their online, apps-based functionality, feeling that they’re an unnecessary complication of a TV with something that can be done better on other types of device. But while it’s not perfect, we honestly think that a few hours spent with the UE55D8000 could be enough to change many naysayers’ minds.


For starters, there’s the Smart Hub. This new onscreen menu, accessed via a dedicated button on the remote control, gives you access to the myriad sources the TV supports from a single, beautifully designed, graphics-heavy and ‘hi-res’ portal screen. You can get directly to video, photo or music files stored on any USB sticks you might have slotted into the TV’s three USB ports; you can jump straight to the built-in HD tuners (both Freesat and Freeview are supported); you can explore the contents of a DLNA PC if you have one networked (either via Ethernet or the 55D8000’s built-in Wi-Fi system); you can head off onto the Internet via a built-in browser; or you can delve into Samsung’s new, improved, apps-driven online service.


There’s also a new Video section that gets its own space on the Hub and allows you to access information on most of the films you can think of, recommend films to friends, and even track down streamed screenings of a film (though this side of the service wasn’t fully supported on our pre-official launch sample).


There’s even a Universal Search tool that can be set to trawl the Internet at large as well as just all of your local ‘on TV’ content.

Going back to the apps, there were 37 to choose from during our test period with the 55D8000. This number will certainly grow ahead of the formal launch of the TV by the end of March, though. For instance, we couldn’t spot the BBC iPlayer, but Samsung assures us this will be there by launch time.


It should also be said that all 37 of the apps we took a look at were free to download, with many of the more ‘specialist interest’ ones only populating the apps section of the Smart Hub after you’d chosen to download them. 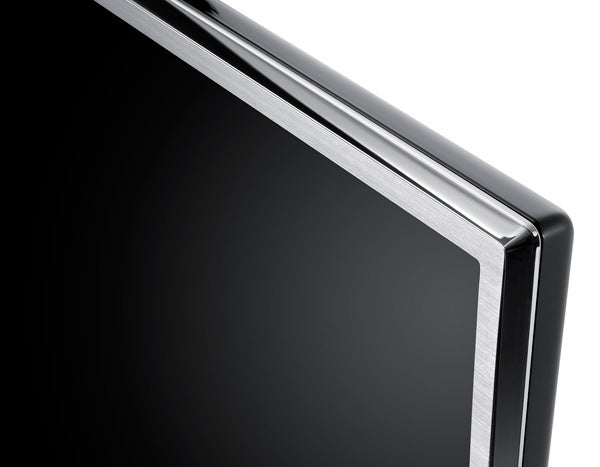 Among these more niche apps were an extensive series of mostly forgettable games, access to the Picasa photo storage site, and a few ‘daily update’-style services such as an ‘on this day in history’ tool from The History Channel. Among the more headline services that get pride of place in another ‘Featured’ section of the Smart Hub screen are the AceTrax movie download service, LoveFilm, YouTube, Skype, and Google Talk.


Inevitably, some of the apps offered by the 55D8000 are less than useful. Most of the games, for instance, will probably never get touched more than once. What we maintain might well get some regular use, though, are the various video services on offer. Services which we expect to see expanding sooner rather than later.


With so much to talk about regarding the 55D8000’s Smart Hub and, in a moment, 3D capabilities, we won’t go into as much detail as we normally might on the sort of picture fine-tuning adjustments the set carries. What we must say, though, is that despite the set not having ISF or THX endorsement, it’s certainly not short of tweaks and adjustments. Including such appreciated calibration aids as a 10-point white balance, a variety of gamma tools, and a colour management system.

Moving on to the 55D8000’s 3D features, the most notable addition is auto-detection of incoming side-by-side 3D formats of the sort delivered by Sky’s 3D channel, saving you the bother of manually activating side-by-side mode in the TV’s menus. You can also adjust the image’s depth and focus via a 3D ‘optimisation’ slider.


What really matters about the 55D8000’s 3D capabilities, though, is that they deliver the 3D goods much more successfully than those of Samsung’s first-generation of 3D TVs.


First and most importantly, they suffer much less with crosstalk. Scenes like the ”Monsters Vs Aliens” Golden Gate bridge sequence and archived Sky footage from the ”Ryder Cup” is much less prone to the old double ghosting problem, especially if you don’t go too mad with the backlight setting (around 12 seemed to work best). 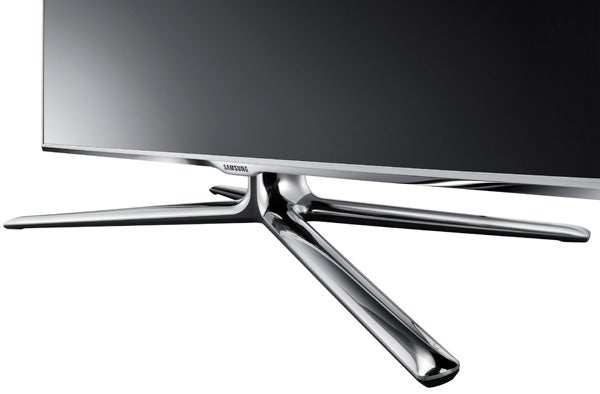 This has a massively positive impact on the 3D experience, allowing you to watch 3D for longer without feeling tired, and finally making it possible to see without distraction just how detailed and crisp Samsung’s 3D engine can make full HD 3D material (from Blu-ray) look. Furthermore, the huge reduction in crosstalk also makes the 55D8000’s images seem to have a greater depth, without your eyes having to work overtime to resolve everything.


The other two palpable hits about the 55D8000’s 3D performance are the richness of colours and the striking brightness level that remain even after you’ve donned Samsung’s active shutter glasses – glasses which, incidentally, have shifted to Bluetooth syncing with the TV rather than the old infra-red system.


It’s this brightness and colour potency that represented the most significant Samsung 3D advantage over the otherwise excellent 3D plasma TVs last year, so it must be a little scary for the plasma brands to find Samsung not only improving its 3D brightness and colour response, but also drastically reducing last year’s big LCD weakness, crosstalk.


That said, the 55D8000 hasn’t got rid of crosstalk completely. There are still minor traces of it to be seen here and there – more, still, than we saw on Panasonic’s 2010 plasmas, in fact. But let’s be quite clear, here: the 55D8000 is definitely a true advance for the 3D cause, and sets the bar high for the rest of 2011’s TVs.

Given that 3D sources are inevitably still limited, it’s a relief to find that the 55D8000 is also a terrific 2D performer. Again, clearly better than 2010’s Samsung equivalent models, in fact. HD fare looks superbly detailed and pin-sharp, as well as rich in colour, dynamic, and dripping in contrast – not least because the 55D8000 can produce a startlingly deep black colour by edge LED standards.


It even manages to do this without suffering the horrible backlight inconsistency issues noted with so many edge LED TVs. There’s a minute drop off in brightness towards the centre of the screen, but this is only noticeable when the screen is filled by washes of a single colour shade – which, of course, happens very rarely in normal viewing conditions. And even when it does appear, it’s hardly a big deal. In fact, many people will probably never clock it at all, which is just fine with us. 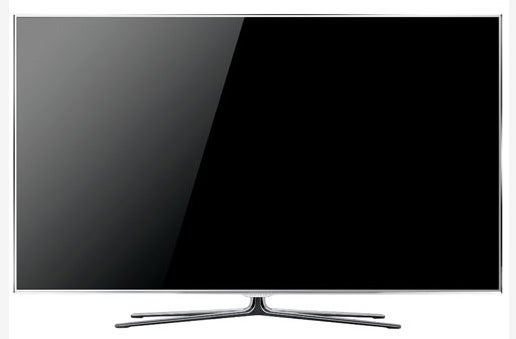 Motion is handled smoothly and cleanly, without the need for intrusive amounts of video processing, and 2D sources are upscaled with a keen eye for detail and an even keener talent for subduing source noise. Really, the only significant picture issue, aside from the residual 3D crosstalk, is the set’s fairly limited viewing angle before contrast and colour are reduced. But this is also the case, of course, with pretty much every other LCD TV around except for Panasonic’s IPS Alpha models.


While the 55D8000’s pictures inevitably steal the show, we’re rather surprised to also have positive things to say about the set’s audio. For Samsung has finally managed to get some more than decent sound quality into one of its flat TVs, so that the 55D8000 delivers a genuinely rounded dialogue track, pleasingly clean treble information, a quite open and punchy mid-range, and even a bit of low frequency response. Who’d have thunk it.


Samsung has clearly piled an enormous amount of effort into the 55D8000, and the results speak for themselves. It’s a TV that’s as excellent as it is innovative. If this is the shape of things to come in 2011, you can consider us very excited indeed.