As we’re only two days away from Christmas at the time that I’m writing this, I’ve frankly decided to give myself an early Christmas present by spending some quality time with Pioneer’s latest and, indeed, greatest plasma TV: the KRP-500A.


This model number immediately hints at something strange going on, as it doesn’t seem to tally with Pioneer’s usual ‘PDP-something’ numbering convention. And the sense that something’s different grows as I count up the boxes Pioneer has supplied me with and find not one, not two, but three. Inside one lies the screen, inside another lies a desktop stand, while inside the third lies the real key to the 500A: a separate AV receiver unit.

In other words, with the 500A Pioneer has ripped the tuner, processing and connectivity usually found in a TV out of the screen, and stuck them into an external box. And there are at least three very good reasons why it might have wanted to do this.


First of all, it’s widely accepted among the AV cognoscenti that it’s possible to deliver much more successful video processing if you remove the processing chipset from the confines of a flat TV chassis. Second, using an external tuner/connections box allows you to only have a single connection cable running into the screen – a much better solution if you’re wall-hanging the TV than having loads of cables spooling out down your wall. 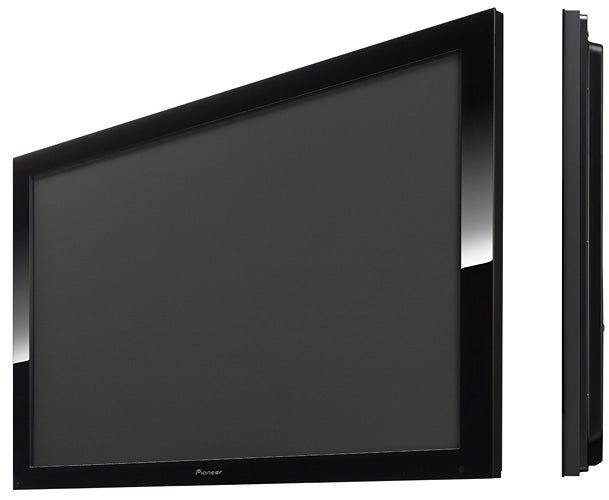 Finally, removing the tuners from the 500A’s screen makes it possible for Pioneer to trim down the screen’s depth; so much so that the 500A’s screen comes in at just 64mm deep – barely half the depth of Pioneer’s standard plasma TVs.


The extra slenderness of the 500A’s screen makes it an even more desirable item than Pioneer’s PDP-LX5090, which was itself a vision of high-gloss elegance. But putting even more icing on the design cake is the separate media receiver, which sports a gorgeous glossy, near-reflective finish that makes it perfectly matched to the screen. 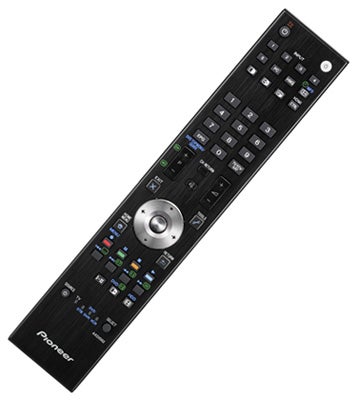 It’s worth noting, too, that the design prowess on show here extends to the remote control, which is a gloriously heavy, tactile thing made from aluminium rather than the usual plastic.


The potential flexibility advantage of going for an external media receiver immediately becomes apparent with the 500A’s connectivity. For the KRP-M01 receiver is stuffed with connections to cater for pretty much every scenario. There are four HDMIs, for instance (three on the rear, one on the front), a USB input, a front-mounted D-Sub PC port, two common interface slots, three SCARTs, an optical digital audio output, a component video input, an Ethernet port, and a satellite connector alongside the normal antenna connection.

Going back to some of the entries on the KRP-M01’s long list of jacks, the Ethernet port allows the box to hook up to and (since it’s DLNA-certified) access multimedia files on a PC; the USB input permits you to play JPEG stills from USB storage devices straight into the screen; while the satellite connector actually allows you to connect a dish to the receiver and watch free to air satellite broadcasts.

The 500A’s tuner can actually handle MPEG-4 HD, meaning that you can, say, receive and watch BBC HD on it. However, it doesn’t support the dual-stream Freesat service, or the encryption systems of Sky, and won’t even be able to handle Freeview HD when that eventually launches, thanks to that service’s likely use of a new DVB-T2 decoding system not found in the 500A. Indeed, the latest we hear is that DVB-T2 decoders probably won’t even be made available to manufacturers until autumn 2009.


Looking for more points of difference between the 500A and the PDP-LX5090, one of the main things is a new AV Optimum mode that uses an optical light sensor to automatically adjust the screen’s picture settings according to the light conditions in the room and – get this – the colour characteristics of the ambient light around the screen. Ooh, clever.

Probably the most ‘dreamy’ feature for AV purists, though, is the 500A’s new Pure AV mode. This basically bypasses as many of the usual video processing shenanigans between the source and the screen as possible, enabling the picture to look almost precisely how it appears at source. We have absolutely no doubt whatsoever that provided it works well, this purist’s feature will sell a healthy number of 500As all by itself.


Exploring the 500A’s onscreen menus, meanwhile, immediately reveals another key difference between it and the LX5090. For the 500A uses a really rather sumptuous new onscreen menu system, complete with metallic-looking background, HD presentation, fast-key shortcuts, and best of all an onscreen guide to what each option actually does. This is a huge improvement over the slightly inscrutable onscreen menus of past Pioneer screens.

There’s a decent degree of flexibility to be found in the 500A’s menus, too. With pictures, for instance, some of the more impressive fine-tuning elements on offer include three different gamma settings, Pioneer’s excellent PureCinema processing for adjusting the progressive scanning to better suit film (rather than video) sources, an ‘Intelligent’ mode that can take on automatic picture optimisation duties if you don’t like tinkering with things yourself, dynamic range expansion, black level expansion, and that most important of things to a true AV obsessive, a colour management system.


This enables you to adjust the relative saturations of all six of the main colour components, as well as tweak the basic colour temperature and switch on or off colour transient improvement processing. I should add, too, that there are no less then four different noise reduction systems; one standard ‘3D’ one, a field one, an MPEG block one, and one aimed expressly at Mosquito noise.

As I set about trying to assess the 500A’s picture performance, to some extent there’s not really much I need to say. For since the technology in the 500A’s monitor is essentially the same as that found in the PDP-LX5090 and LX6090 models I’ve already raved about, we already know the results are going to be more or less gobsmackingly good, with class leading black levels, stunningly rich colours, impeccable sharpness, and good motion handling. So really all I need to focus on is whether the external media receiver and any of the new features really affect the picture quality. 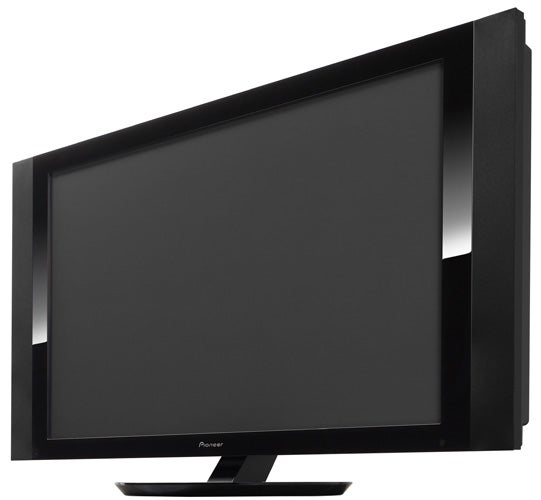 
The short answer is that they do. Not by an absolute country mile, but enough to add an extra reason for AV fans to pick a 500A over the ‘integrated’ Pioneer plasma models.


Without doubt the single most intriguing string to the 500A’s bow is the Pure AV mode. For it really does appear that if you use this mode with a high quality HD source, the resulting picture looks subtly different – in a good way – to the results achieved using a PDP-LX5090. There seems a touch more sharpness, a touch more authenticity to the colour palette, and a touch more ‘texture’. 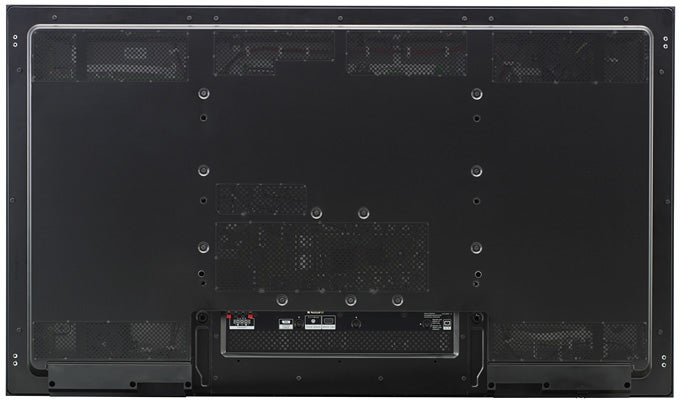 I should say here that when I say ‘texture’ I’m to a large extent talking about grain, but since grain is an inherent – and deliberate – part of many HD film transfers, the 500A is merely doing what it’s supposed to be doing in Pure mode and revealing every last thing a source has got going on.


This fact makes me feel the need to stress that I’d maybe only really recommend the Pure mode with a HIGH QUALITY HD source. For the mode’s inevitable ‘warts and all’ tendencies mean that if a source has any severe weaknesses caused by poor encoding (and believe me, such weaknesses aren’t as rare as they should be, even on Blu-ray discs), such as a curious colour palette, lots of dot crawl and/or a tendency to over-stress edges, in Pure mode the 500A won’t be able to use its clever processing to actually make things better.

When you do want the 500A to ‘make things better’, meanwhile, it does so with exceptional confidence and without generating seemingly any of the nasty processing side effects that accompany so many processing-heavy TVs. Probably the best way to describe the 500A’s improvements over the LX5090’s pictures is to say that they just show a defter feel for what a given source is trying to achieve pictorially.


The 500A’s knack for improving things extends to standard definition sources too, which look to my eyes slightly more stable and noiseless than they do on the LX5090 – and vastly less noisy than I’m used to seeing on many other Full HD TVs.


The only thing I might say against the generally stunning 500A is that strangely I didn’t find its colours quite as convincing ‘out of the box’ as those of the LX5090. The various colour and gamma management options provided me with the tools to get things back to how I like them, but you should just take heed that getting the very best from the 500A might entail a bit of effort on your part.


Provided you’re feeling flusher than most right now, all you need to know about the 500A is that it actually outperforms even its own sensational LX5090 sibling – and in doing so can justifiably claim to make the best better. In fact, I might even go so far as to call the 500A a Christmas cracker were it not very likely that Riyad would sack me for my trouble.


One final word of advice: if you’re going to buy a 500A, I’d suggest you do it soon. For not only has Pioneer just knocked a whopping £500 off its asking price, but we have it on good authority that the prices of AV gear across the board could be set to rise by as much as 30 per cent next year thanks to our collapsing pound. Don’t say we didn’t warn you!