What is the Sony Xperia Z3+?

Sony’s made a habit of updating its flagship phone every six months or so, and the Z3+ is the latest example. It’s taken a little longer this time around, but the Z3+ is the ‘six-monthly’ update to the Xperia Z3 that was launched in September last year. It’s thinner and lighter, while also adding the new Qualcomm 810 processor and a wide-angle front camera.

That ought to be enough for it compete with the Samsung Galaxy S6, LG G4 and other top-end Android smartphones, but it isn’t. It’s a nice phone, but the only thing that stands out at present is a totally unacceptable overheating problem with the camera. If Sony wishes to continue as a phone maker then it needs to get its act together – and soon. 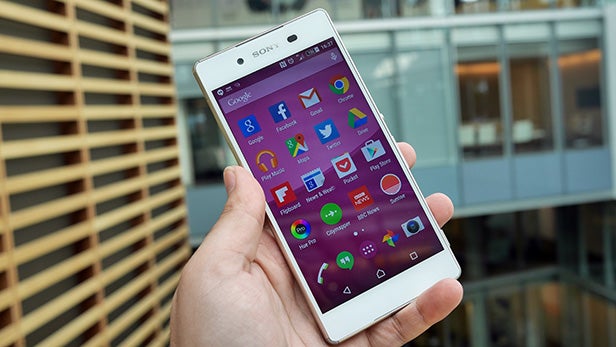 Sony has made all the right moves in some respects. The Z3 was hampered by an overabundance of annoying flaps and buttons, and the Z3+ isn’t. The main Micro USB port is now uncovered and on the bottom, instead of on the left and behind a delicate, easy-to-break flap, while the side-mounted dock connector is gone, too.

The latter change makes the Z3+ much nicer to hold – it has fewer protrusions and more smooth, undisturbed edges. The new pullout tray for the microSD card (up to 128GB) and Nano SIM is a tad awkward, but overall these small changes make for a better phone to use. 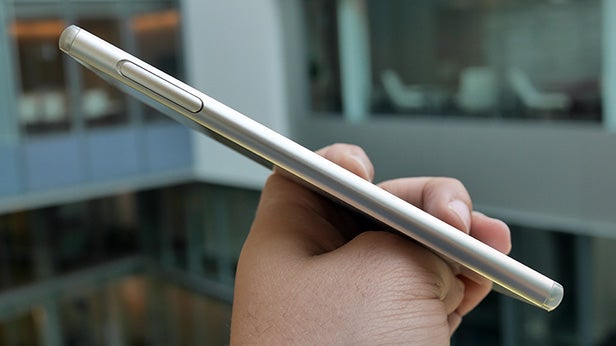 Yet it retains the benefit of water- and dust-proofing that’s attracted people to the range over the years. The Z3+ has an IP68 rating, which means it’s totally dustproof and waterproof down to 1.5 metres for up to 30 minutes. Waterproofing isn’t a killer feature, but it’s a nice one all the same.

The basic button layout makes using this large, 5.2-inch phone much easier, too. Both the standby button and volume buttons are within easy reach, and they aren’t as easily confused as they are on the HTC One M9. There’s also a dedicated camera capture button, which lets you quickly launch the camera even when the phone is locked. 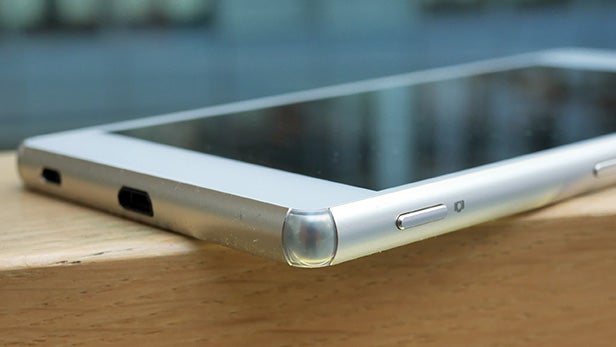 All these little touches show Sony has put some serious thought into the Z3+ and it’s one of the nicer-looking flagship phones. Views differ in the TrustedReviews office, but it holds its own against the HTC One M9 and LG G4, though the Galaxy S6 and iPhone 6 still stand out in their own little mini-league.

The glass rear is still rather slippery, though – it’s the kind of phone that can slide off uneven surfaces, sometimes to its doom. And, for such a pricey phone, the visual clutter of the ‘toughened corners’ and connecting trims is off-putting. Sony has evolved this basic design over several versions now, but it would be nice if it tried something fresh soon.

You get most of the features of other top-end phones, though, including NFC and quad-band 4G support. And the Z3+ adds Hi-Res Audio support, making it one of the few choices if you’re interested in Hi-Res Audio. You can even get the Z3+ with a free pair of “hi-res” headphones in the UK. 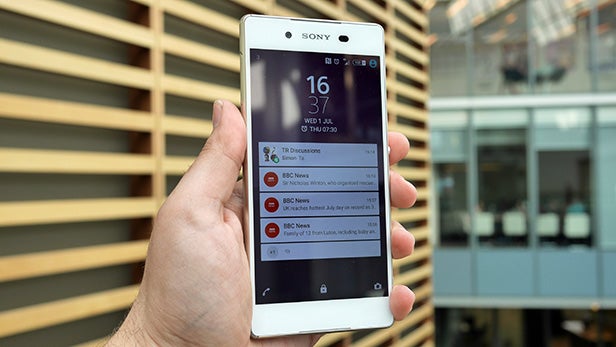 There’s nothing new to report here. Sony’s retained the same 5.2-inch IPS screen as in the Z3. That means the Z3+ has 424 pixels per inch. This is less than ‘Quad HD’ phones like the LG G4 (538ppi) or Galaxy S6 (577ppi), but the Z3+ simply serves to illustrate the dubious benefit of such resolutions on small phones. Text on the Z3+ looks perfectly sharp and nicely defined.

It’s also a bright, rich and colourful screen, so photos and video look just as good as on most of its rivals. The usual exception is the AMOLED screen on the Galaxy S6, which has an obvious edge with contrast that ensures it can generate near-perfect blacks. The Z3+ can’t claim the same, but processing tech borrowed from Sony’s TVs gives you pleasing results all the same.

Only the viewing angle slightly disappoints. There’s a greater loss of brightness and contrast when viewed off-centre than rivals, though it isn’t a critical problem – only someone stood next to you would notice.

The fact that outdoor visibility is very good is far more important, while the responsiveness of the touchscreen is as good as you’d expect from a top-of-the-range phone.