Last week our HTC One vs Samsung Galaxy S4 head-to-head concluded that Samsung no longer makes the best Android phone. But after developments this week, I wonder whether Google wants Samsung to continue making Android phones at all.

What happened?
In an unprecedented move Samsung announced a deal on Thursday to make an established, high profile Android app incompatible with every Android smartphone except its own. The app in question is ITV Player, the catch up service for ITV – the UK’s largest independent terrestrial broadcaster. 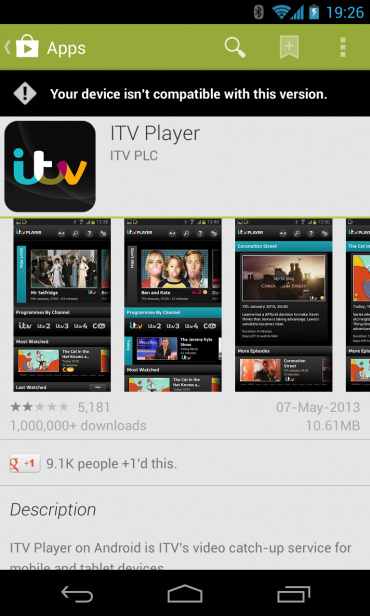 Needless to say the news wasn’t phrased like that. Samsung celebrated the agreement, noting the rise in people wanting to use their mobile devices for video and an ITV spokesperson blamed the fragmentation of Android as a key motivation in its decision. It wasn’t, it was money.

If ITV wanted to avoid fragmentation it would have chosen to make its app compatible with only pure versions of Android – something available to any rooted Android handset, and which discourages fragmentation. Meanwhile Samsung may recognise the demand for such an app, but it has just removed this option for millions of non-Samsung handset owning ITV app users. ITV said it plans to (re)launch for app for other Android devices “in the future”, but didn’t put a date on it.

Was this a one-off move that Samsung doesn’t intend to repeat elsewhere? Don’t be silly. Will such moves cause even greater fragmentation of Android? Absolutely. Will it damage Android? Absolutely. Not only has the deal put the platform’s fragmentation again in the headlines, but now it is also headline news that its key apps can be bought up to make this even worse. Everyone hurts except for Samsung, and Google hurts most of all.

Yes rivals could start doing the same thing. But Gartner states Samsung sells more Android smartphones than HTC, Sony, ZTE, Huawei, Motorola and LG combined and Samsung could easily outbid the competition for anything it wants. Big app developers can also cash in on this trend with incentives to make sure their apps are made with compatibility for Galaxy ranges first, and what Google has coded second.

But why would Samsung want to hurt the goose that lays the golden eggs?

Weak Android = strong Samsung
Here is a dirty secret: it is in Samsung’s interest to damage Android.

Each successive generation of Samsung’s Android phones has been more laden down with TouchWiz customisations and non-removable Samsung apps than the last. In the Galaxy S4, for example, 7GB of its internal memory is taken up its custom apps and highly tweaked version of Android. This is 1GB more than the Galaxy S3 and more than twice the size of a clean Android install partition. Samsung has been building an operating system on top of an operating system.

It is a classic Trojan Horse tactic. Android had unstoppable momentum, Samsung fought hard to become the chief beneficiary of it and now it wants an Apple-like control of its destiny. When Samsung adds software to its Android phones it believes it improves them, when Google updates Android with similar features it enables the competition to catch up.

Fragment Android and you stop the competition improving and mainstream customers learn only Samsung’s Android phones are worth buying. Only Samsung has the resources to keep improving a stalled OS – though the tactic only works long term if you have an exit strategy.

Samsung wants to be like Apple
The exit strategy is called Tizen. Tizen is a mobile operating system built by the Linux Foundation, but primarily funded by Intel and Samsung. It is open source by nature, but the two primary investors have scared away rivals.

Conveniently Tizen is covered with TouchWiz so to the casual observer it looks identical to Samsung’s Android phones. It can also easily run Android apps with a code tweak and Samsung would also have big-name natively-coded apps if only it could tie up some deals with… oh wait.

So break down Android to hurt rivals, switch to Tizen with all of Android’s app goodness (plus exclusives) and promise customers the unity Android was never able to deliver. Samsung needs to hurt Android now if it is going to create a big enough crack in it to open up room for another operating system in the market.

Samsung has a track record. It failed to do this once with Bada (which is actually merged into Tizen) and will inevitably follow through more strongly this time. A high profile Tizen phone has already been promised by September.

Of course Tizen is just part of the puzzle. Having its own platform is one thing, but Samsung has also learnt from Apple that the ecosystem around it is equally important. As such Samsung’s market leading televisions, monitors and laptops have all been gaining features that make them exclusively work better with Samsung’s phones. There are audio docks specifically for Samsung phones too. The pieces are all in place.

Do no evil
None of which means we should feel sorry for Google. Samsung may be trying to manipulate Android for its own ends, but Google has attempted to do the same with Windows, Mac and iOS for years. 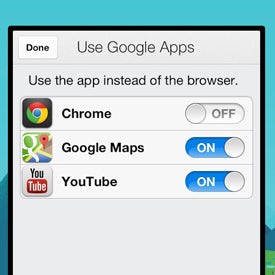 Visit the Google homepage with a browser other than Chrome and you’ll always be nagged to install it. Use Google’s apps on iOS and they form their own Trojan Horse ecosystem. This month Google tightened the knot even more, making Gmail, Google Search, Google Voice Search and Google Maps all default to one another cutting Apple’s core apps out the loop.

Find you’re using all Google’s apps on your iPhone and before long you’ll wonder why you don’t just switch to Android. It isn’t nice having your own tricks turned on you.

Paranoid Android
Then again hypocrisy isn’t the point, Google is reaping what it sowed. Android was created with the key message that it is open source and that partners are encouraged to develop it. As iOS took off, it was this which was critical to establishing Android as the next viable alternative. Control was freely relinquished, but exploitation was not expected.

Furthermore Samsung is only the start. Where it has headed in relatively subtle steps Amazon has charged like a bull in a china shop. If Amazon can follow up its tablets with a compelling phone, the combination of Samsung and Amazon success could see Android ripped to pieces.

On their own these partner woes may not bring Google to a tipping point, but they are not on their own. Google also faces a rapidly spiralling EU antitrust investigation. It is accused of exploiting its monopoly in search and Android has been thrown under the spotlight too because it has crept over the threshold of 70 per cent market share.

Increasingly the solution looks to be control. Insisting partners use stock Android would immediately create a strong image for customers of unification, it would also make it easier for handsets to be upgraded, which reduces fragmentation. Partners that step away would reduce Android’s market share and end the monopoly-based antitrust investigation.

Of course one of those partners could be Samsung, but arguably that would be a good thing…

Next, read our run-down of the Samsung Galaxy S4’s biggest problems…