Introduction
When we tested the Samsung DA-E750 wireless audio system earlier this year we were impressed by its superb sound quality and generous range of features, which includes AirPlay support and the first ever dual dock for Android and Apple devices. Great though it is, the Samsung DA-E750 is a bit on the pricey side, but thankfully Samsung has a number of cheaper versions that also provide dual docking, alongside other tasty features. Among them is the Samsung DA-E550, an absurdly stylish entry-level unit that lacks AirPlay but hangs on to its ‘wireless’ status by virtue of its Bluetooth streaming functionality.

Samsung DA-E550 Design
We’ll come to the spec in a bit, but we can’t go any further without talking about the design of the Samsung DA-E550. It’s shaped like a horn that curves round and sports a speaker at either end – not forward facing like the Samsung DA-E750 but angled outwards for better dispersion. 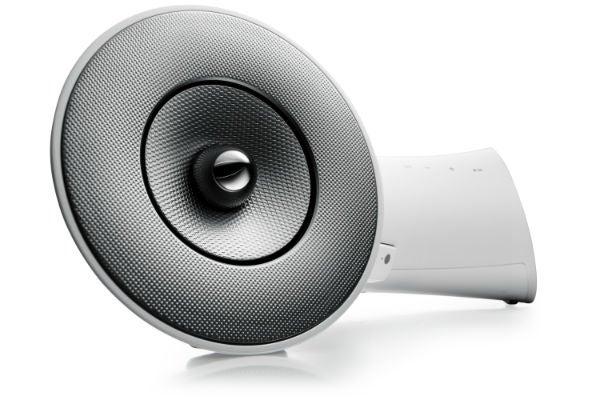 The exterior of the Samsung DA-E550 is coated in a lovely gloss white finish, while the speaker cones are fashioned from a dappled silver material (not glass fibre like the Samsung DA-E750) with a shiny silver phase plug sticking out of the middle – all of which makes it an obscenely attractive piece of kit. Its build quality is solid too, although the slightly plasticky finish is nowhere near as luxurious as the DA-E750’s gorgeous lacquer. 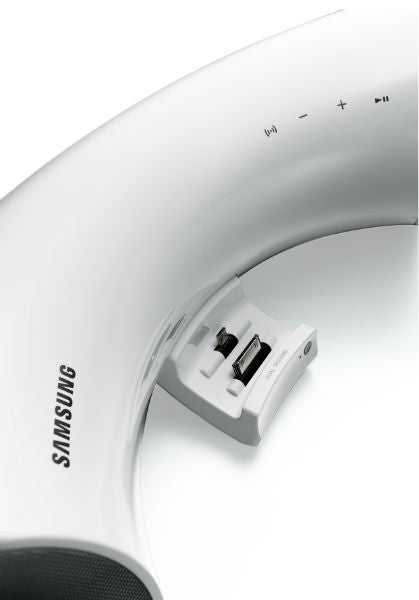 The dual dock is located on the inside of the bend, bang in the middle. One firm press makes it pop out smoothly and there you’ll see the two connectors, one in front of the other. There’s a rubber skin that slots over the connectors to protect your device, as well as stick-on supports to stop it coming in contact with the unit.

There’s a row of touch-sensitive controls on the right-hand side for controlling volume, play/pause for Bluetooth/dock playback and activating the Bass mode. There’s no display panel, something the Samsung DA-E750 could have benefitted from, but with the Samsung DA-E550’s more simple range of talents it’s not as crucial. There is a tiny red light on the dock tray that flashes when there’s any activity.

On the rear panel is just a single socket – a 3.5mm minijack input for your external sound devices. That might sound stingy but it’s designed to be a self-sufficient sound system with its built-in docks and Bluetooth, so anything else isn’t really necessary.

Bluetooth is another eye-catching feature, but this isn’t any old Bluetooth – it’s Bluetooth 3.0, the most recent version that supports the apt-X csr codec to deliver higher-quality sound than earlier versions. Other benefits include faster data transfer, greater transmission distance, lower power consumption and no latency.

Due to its price, the Samsung DA-E550 lacks key features found on the 6 and 7 series docks, including AllShare Play, AirPlay and USB connectivity. You also miss out on the Samsung DA-E750’s vacuum tube amp and the built-in subwoofer. The DA-E550’s power output is quoted at 10W, a big drop from the 100W offered by the DA-E750 or the 40W of the Samsung DA-E650.

Samsung DA-E550 Operation
Setting up the Samsung DA-E550 is a piece of cake due largely to the lack of complicated stuff like network streaming. So whether you’re docking a Galaxy or Apple device, plugging in an external source or streaming via Bluetooth, you can get to your music in minutes.

General operation is easy enough, thanks to the supplied remote which uses large chunky rubber buttons with clear labels and symbols. It’s similar to the Samsung DA-E750’s remote, with the same size and layout, but it’s finished in black as opposed to silver. Oddly it’s actually nicer to use than the DA-E750’s remote, which has clicky plastic buttons. 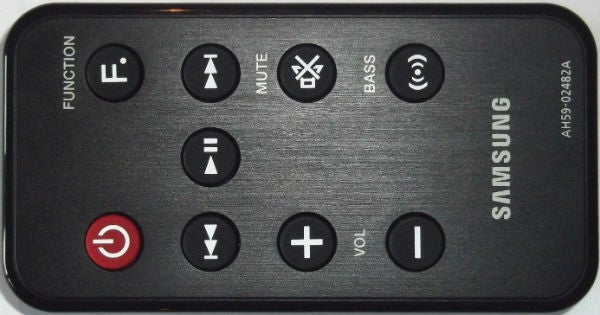 You can use the remote to play, pause and skip tracks on Bluetooth and docked devices, as well as adjusting the volume and turning the Bass mode on and off. You can switch between sources using the Function button on the remote.

So far so simple, but the Samsung DA-E550 isn’t without niggles. The lack of a Menu button on the remote means you can’t skip back through menus on iPods and iPhones – you have to scroll through the menus on the device itself. There also need to be some indication of whether the Bass boost mode is activated – you can only tell by ear whether it’s on or off.

On a more positive note, setting up Bluetooth is easy – simply search Bluetooth devices on your device and up pops the Samsung. Connect and away you go. When you play music over Bluetooth, it takes priority over the other sources and switches automatically, but when you press stop it returns to whatever was playing before. Initially there were quite a few brief drop outs when streaming from a Blackberry phone but it seemed to calm down after a while.

Samsung DA-E550 Performance
As for sound quality, the Samsung DA-E550 is mightily impressive. It ticks all the boxes – crisp, sprightly high frequencies with no harshness? Check. Smooth, robust vocal tones? Check. Solid bass presence? Check. Whether it’s belting out hip-hop by Kanye West or tackling the gentle jazz strains of Miles Davis, the Samsung DA-E550 simply isn’t phased, offering a smooth, detailed sound that brings out the best in any genre. 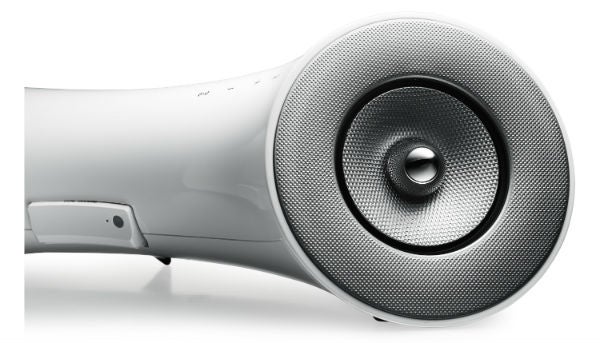 Also impressive is the quality of music streamed over Bluetooth. With Love Is a Losing Game by Amy Winehouse, for example, the hi-hats and the top-edge of the track’s big snare drums sound sharp and clear, while Winehouse’s vocal sounds as seductive as ever.

What lets the quality down slightly, however, is the over-eager bass output, which feels a little imposing at times and threatens to swamp the overall sound, particularly with the Bass mode activated. This has clearly been tuned to create a sense of depth and punch for casual everyday music playback, but fussier listeners might be after a more transparent sound with a little more restraint in the bass department.

Samsung DA-E550 Verdict
If you don’t have the funds for one of Samsung’s swanky 6 or 7 series audio systems then the Samsung DA-E550 makes a decent alternative. Sure it lacks the flashy features of the pricier models, such as AirPlay and USB connectivity, but with Bluetooth 3.0, a Galaxy/Apple dock and stereo input there are still plenty of ways to play your tunes. It’s also stunning to look at, with a envelope-pushing design that’s unlike anything else on the market, plus it’s easy to use (a couple of minor niggles aside) and delivers smooth, detailed music performance as long as you keep the Bass mode in check.