The dust has settled on Apple-fest 2016, and people are already shelling out cash for the iPhone 7. With plenty of news to mull over, here are the views from the TrustedReviews office.

On Wednesday, Apple finally announced the iPhone 7, the Apple Watch Series 2, and a pair of wireless earbuds so hideous that they’ll be generating memes for months to come.

There’s plenty to talk about, so let’s kick off on a high note with Mobile Editor Max Parker’s positive outlook on Apple’s 2016 keynote:

“Last week I was at IFA, sitting through snore-worthy press conferences from Asus, Huawei and more. The one thing all these had in common was their constant comparisons and digs at Apple. ‘Our laptop is 25% faster than the MacBook’ blah blah ‘Our phone is thinner than the iPhone’ blah blah. Shut up. It’s everywhere. It’s annoying, and it’s petty.

But ; it let it stand up on its own and Apple came across, to me anyway, much the better for it.

Apple’s press conferences are just generally better than anyone else’s. Yes, they’re filled with odd comments – normally attributed to the cringe-worthy Phil Schiller who needs some serious modernisation himself – but they get the point across very well. It made me believe I didn’t need that old-fashioned, pesky headphone jack.

Sony, who had a PS4 event at the same time, failed with this. It didn’t successfully explain why anyone would need the PS4 Pro, mumbling for far too long about obvious points without going into any sort of interesting technical detail. Wednesday night had two press conferences; Apple showed how it’s done, and Sony showed how not to do it.”

But while it’s all smiles and waves over in California, the outlook is less rosy across the pond, as Deputy News and Features Editor Sean Keach (hey, that’s me!) explains:

“On September 8, I woke up to a new world. The grass looked greener, the air felt cleaner, and the faint echo of Tim Cook’s gentle southern tones washed over me like a cool breeze. It was in that halcyon moment – that familiar post-keynote daze – that I realised I had been royally shafted. We all had. Britain had become the Anastasia Steele to Apple’s Christian Grey, in a twisted 50 Shades of Brexit.

Thanks to post-referendum fluctuations in the pound-to-dollar exchange rate, Brits are paying between 11% and 16% more than we should be for the new iPhones, which now start at £600 and rise to a lofty £920. While the US enjoys a lowly $20 bump to the price of Apple’s ‘Plus’ model over last year’s, we’ll be forking out a bonus £100. Even the basic iPhone 7 has been jacked up by £60 – but Americans won’t pay a penny extra.

‘One of the biggest reasons to upgrade’

If you can look past the wallet-fondling price however, as Computing Editor Michael Passingham has, then there’s plenty of joy to be found in Apple’s overhauled CPU architecture – so he says:

“Apple has done a fantastic job of making processors exciting, and the new A10 Fusion was actually very interesting to the more technical among us. Where previously we had basic dual-core chips, Apple is now using a design very similar to ARM’s big.LITTLE technique to produce a smart quad-core processor.

Low-priority tasks will get shoved off to the two low-power cores while important functions will be kept on the high-performance main cores. As a result, you have a chip that’s 40% more powerful than last year’s A9 and without compromising battery life – Apple has clearly learned from its mistakes with the previous two generations, where battery life was middling at best.

Apple likes to blow its own trumpet, but if the A10 Fusion lives up to Apple’s claims, it could be one of the biggest reasons to upgrade, especially if you’re on an iPhone 6 or older.” 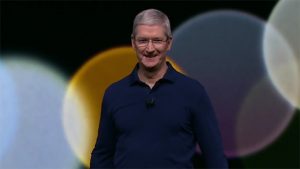 If high-efficiency cores didn’t get you all hot and bothered, then maybe Apple’s announcement that Pokémon Go is coming to the Apple Watch did.

Or maybe it made you really, really miserable, as is the case with honourable moaner-in-chief, our very own News and Features Editor James Laird:

“You can talk about the iPhone 7, new Apple Watch, and cringe opening reel with Tim Cook all you want – the real takeaway from the Apple event this week is that Pokémon Go is dead. That’s right, dead. And yes, I was wrong. I was obviously being far too optimistic when I recently said the ridiculous fad would last up to a year, because Apple’s belated attempt to jump on the Pokéwagon underlines the fact that no one other than a few token saddos  – – give two shits about the game anymore.

Why? Look at yourself in the mirror. What was your reaction when Apple and Niantic announced that a Pokémon Go app was coming to the Apple Watch?  Nothing. Because you don’t care, admit it.

Like me, you probably downloaded the game to see what all the fuss was about. Maybe, unlike me, you’re not a cynical sociopath and actually got some kind of enjoyment out of pretending to be five again. But the pleasure lasted about as long as your first orgasm, and when Apple and Nintendo tried to make out like it was still a thing, the truth finally dawned. You got up to grab another beer, maybe took out the rubbish. What you didn’t do is think: “Hurrah, now I can see how many calories I burn trying to find that Snorlax!” Because neither you, me, or any one else with a vague semblance of sanity care any more.

That’s what I learnt from this year’s iPhone launch: that it’s time to send Pokémon Go the way of Flappy Bird and delete it from Home screen.”

As we pack James off to anger management counselling, Games Editor Brett Phipps is here to offer an upbeat view on Nintendo’s new Mario game for the iPhone:

“The fear of Nintendo joining the world of mobile games was seeing classic titles shoehorned onto touch screens. The company has been very shrewd with making its first title a combination of the most recognisable character in gaming history and one of the most popular and familiar mobile gaming genres – the infinite runner.

While I often fall away from the likes of Temple Run and Flappy Bird, the simple fact this is a Mario game, made by Nintendo, is enough to keep me very interested.”

Look past the pods

And last, but certainly not least, is Wearables Editor Richard Easton, who believes that despite the blunder-tactic AirPods, Apple’s keynote could be the best thing that’s every happened to your body:

“Aside from the hilarity of the AirPods, it felt like Apple finally knows what it wants to do with its Apple Watch. Apple has taken the fitness aspect and decided to really run with it. Just look at the Apple Watch Series 2 marketing on its website to see how important it is now, which is great. I’m actually really impressed that they’ve managed to pack in GPS and really bumped up the waterproofing to such an extent.

The fact that Apple has made such a big push also shows that the fitness aspect of wearables and smartwatches is a big deal to Joe consumer, too. Huzzah.”

That’s all from us, but let us know your views in the comments section below!

Watch: iPhone 7 vs iPhone 7 Plus

What’s your take on the Apple keynote? Let us know in the comments.