Lumix GX8 vs GX7 – A quick specs and feature comparison

Panasonic has a shiny new camera, the Lumix GX8. It’s the follow-up to
the popular GX7, which was released in 2013, so the GX8 has been two
years in the making.

It’s clearly been time well spent as the GX8 is a
big upgrade. Here are 11 ways the GX8 is a better camera versus the GX7.

1) It has a more detailed 20.3-megapixel sensor

Micro
four thirds cameras have been stuck on around 16-megapixel for a while.
There are worse things in the world, but it did mean that mirrorless
cameras based on the APS-C sensor, like the 24.3-megapixel Sony A6000,
had a large resolution advantage.

The new 20.3-megapixel sensor
in the GX8 should capture more detail than the GX7’s 16-megapixels, and
that extra resolution will give you a little more creative control when
re-framing photos in post. 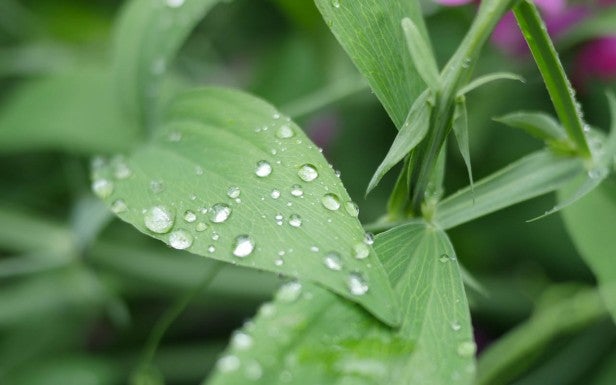 Panasonic
cameras have typically relied on lens stabilization, but the GX7 was
the first to have an in-body system as well. That was useful progress,
but Panasonic’s system wasn’t as advanced as Olympus’ highly-regarded
5-axis system.

In response, Panasonic has developed a ‘dual’
system that combines lens stabilization and in-body stabilization into
one system. Panasonic says this equates to a 6-axis system, though it’s
only a 5-axis system when shooting video.

It remains to be seen if this new system can match or surpass the Olympus one, but it should be a big step-up from the GX7’s. 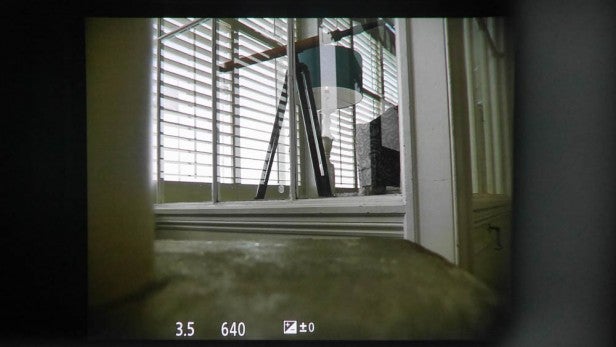 The view from inside the new, larger OLED viewfinder

The tilting EVF on the GX7 received mixed reviews, but we doubt the GX8 will have that problem.

The GX7 had a 2,764k dot LCD viewfinder with a 1.39x magnifcation, but the GX8 opts for an OLED viewfinder with a larger 1.56x magnification. And, while its 2,360k dot resolution is lower, the fact it’s now OLED should mean smoother motion, better contrast and more accurate colours. 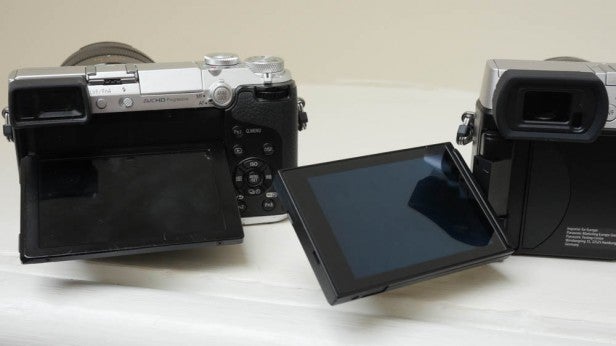 Panasonic has swtiched to OLED for the main monitor, too, but that’s not the most interesting change. The GX7 had a tilting monitor, but the GX8 has a full, flip out screen that’s far more versatile. 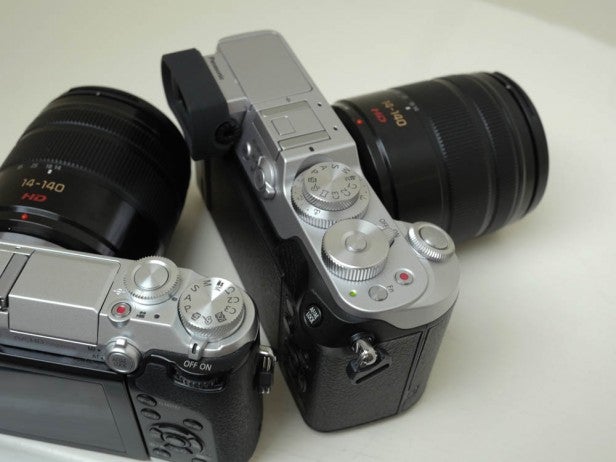 One of the best design changes is the addition of a dedicated exposure compensation dial – it just makes quick, fine changes so much easier. We also like how the second dial is now a large and top-mounted, making it far easier to use.

The GX7 had a fast autofocus system, but it only used contrast detect AF – not the more advanced and reliable phase detection, or the hybrid system favoured by many.

Panasonic addresses this by introducing its Depth From Defocus (DFD) technology, which was introduced on the Lumix GH4. It solves many of the problems of the contrast detect system, so the GX8 shouldn’t suffer from focus ‘hunting’ quite so often. 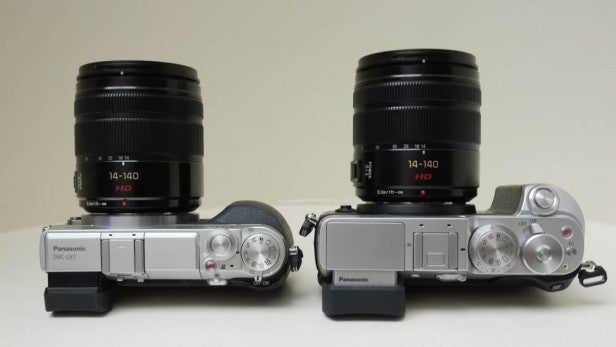 As a keen 4K advocate, it’s no surprise to find Panasonic has added 4K video to the GX8. Like the Lumix G7, it also supports a trio of 4K Photo modes that let you take 8-megapixel stills from a 4K video stream. This effectively gives you an infinite 30fps burst mode at 8-megapixels.

The three modes – 4K Burst, 4K Burst (Start/Stop) and 4K Pre-Burst each have their own uses, which you can read more about in our hands-on with the GX8.

8) You now get an external mic input

This was one of the more annoying oversights of the GX7, so it’s good to see the GX8 has an external mic input. It’s a 2.5mm input, so you might need an adapter to use it, but it’s another reason to consider the GX8 a far more serious video camera than the GX8.

Yet another sign that the GX8 is a rather more serious camera than the GX7 is that it’s weather-sealed – it’s a good thing to have for those momentary downpours and dusty treks. 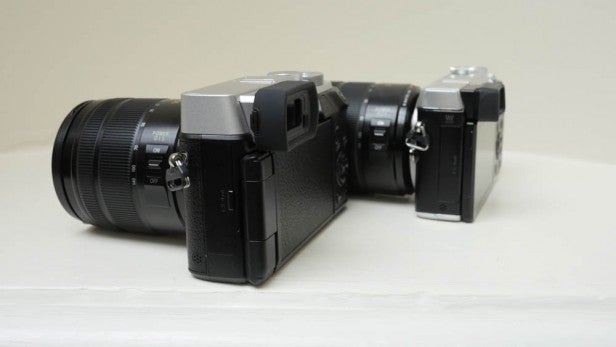 On the GX7, you had to tilt the screen back to remove the flap covering the HDMI, AV-out and remote input. It was an annoying niggle more than anything, but that’s resolved on the GX8 – happy days.

11) You get a faster burst mode

If you’d rather not employ the 30fps 4K Photo mode, the full-resolution burst mode now shoots at up to 8fps – up from 5fps. That’s good news, though it’s worth remembering the Olympus OM-D E-M5 Mk II shoots at up to 10fps.

The GX7 handled well for a relatively slim camera, but the GX8 has a larger, more substantial grip that’s easier to wrap your fingers around. It’s the difference between it feeling comfortably in your hand and being gripped by your fingers. 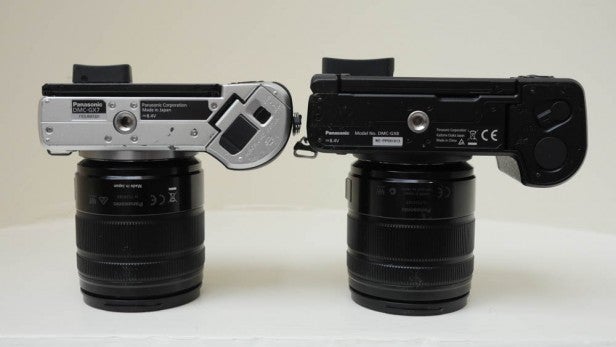 There are two obvious ones, though we’ve only seen a pre-production version so we can’t speak to ultimate image quality and performance just yet. One is that the the GX8 is larger and heavier than the GX7 – it’s 85 grams heavier including body, battery and SD card, though it still weighs less than 500 in total.

The other is the lack of a built-in flash and the fact no external one is included in the box. Most people considering the GX8 won’t want or need a built-in flash, but the Olympus OM-D E-M5 Mk II mentioned earlier includes a rather fine hot-shoe external flash in the box. 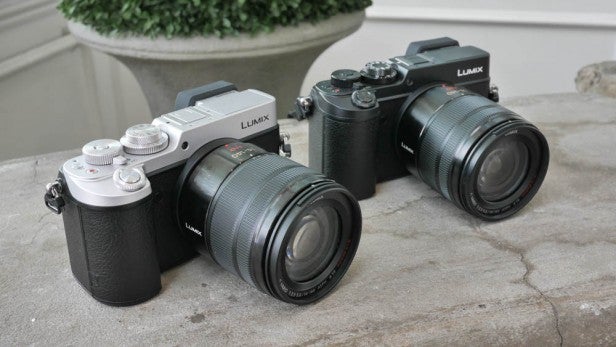 When will we know more?

The GX8 goes on sale in August starting at £1,049 – we’ll bring you a full review just as soon as we get a final, production version of the camera.