But how much better are the new contenders? Well they are all APS-C cameras: this is the size of the sensor, being much larger than a compact camera but smaller than a full-frame top-end DSLR. There’s more to these cameras than sensor size, though.

We’re going to compare the three cameras in each area to see what the extra money gets you. You probably already know the 760D and 750D have a few more megapixels than the 18-megapixel 700D, but here’s what else is on offer.

Contrary to what the numbers may seen to suggest, these three cameras are part of two different generations, not three. The Canon 700D was released back in 2013 while the 750D and 760D were announced just recently as part of the new 2015 line-up.

Canon told us that all three models will be sold side-by-side this year, although we expect the 700D to slowly phased out later in the year.

If you need a lens to go with the cameras, all three will be available with the Canon-standard 18-55mm IS STM kit lens.

While the Canon EOS 750D and 760D are a fair bit more expensive than the 700D these days, all three cameras are of the same class. We’re somewhere in-between entry-level and mid-range here, depending who you talk to on the matter.

All three cameras are made of tough polycarbonate: plastic, in other words. More expensive Canon models like the Canon 5DS have a magnesium alloy frame that should age a little better, but with a little bit of care all three of these cameras will survive many years.

What will disappoint some, though, is that none of these cameras are weather sealed, where all ports are covered with rubberised seals to stop water and dust from getting in. Not being weather sealed does not mean you can’t take the Canon EOS 700D, 750D and 760D out in the rain, you just can’t do so entirely confident and care-free.

If you’re willing to import rather than buying UK stock, you can actually get a weather-sealed Canon at this sort of price, the EOS 70D. 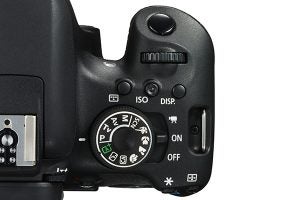 So far the 700D and its newer brothers have been fairly evenly matched on everything but price, but the physical controls is where we see why Canon split the series into two this year. The EOS 700D and 750D have a very similar style, with a single dedicated manual control dial that sits just behind the shutter button.

Using this dial along with the PASM modes available on the mode dial gives you very breezy manual control that even complete amateurs should be able to get to grips with quickly. The Canon 760D, on the other hand, has a layout to appeal to those who are after a bit more in-depth control.

Check out the D-pad controls on the pad of the camera. In the Canon EOS 760D, there’s an additional control wheel that sits around them. When using Manual mode, you can alter two photo parameters at once, with a thumb on the back dial and forefinger on the one up top. 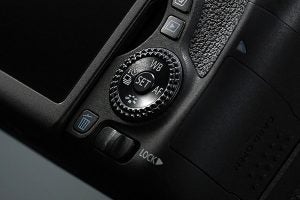 You’ll also notice that the top plate layout of the 760D is completely different too. The mode dial has been shifted from the right to the left side in order to make room for a secondary LCD display.

These are generally seen on cameras more expensive than these, and it gives you a very quick read-out of shooting parameters and battery level without having to look at the rear display, or through the viewfinder. The screen tech used is designed to use virtually no battery power, being a little like a calculator screen in tone. 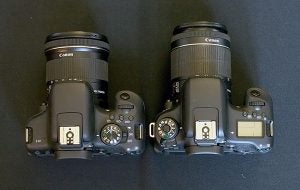 If you’re looking to buy a DSLR to make photography a keen and quite serious hobby, we think the extra £50 the 760D demands over the 750D is worth it. However, if you simply want good photos and just want to dip a toe into the world of manual photography, you might find the layout of the 700D and 750D a bit simpler. There’s just less to contend with.

All three of these cameras use a touchscreen: the Canon EOS 700D was actually just the second EOS camera to use one back in 2013. The style of the three screens is pretty similar too. All have very handy vari-angle displays.

The screen folds out of the body on a hinge, giving you masses of control over its position and angle. This makes shooting at odd angles a lot easier, and is very useful for video shooters, letting you monitor footage even if you’re filming yourself. 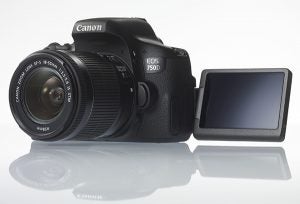 Tilting screens are often left out of Canon’s more expensive cameras: the new £3000 Canon EOS 5DS has a fixed display, for example.

In quality terms, Canon has not made any obvious quality improvements with the new models. All are 3-inch LCD-type displays of 1,040k dots, or 720 x 480 pixels. Of course, in a DSLR like these you’ll probably want to use the viewfinder a good deal of the time anyway.

Once again, the 2015 models don’t see any improvement with the viewfinder tech. Like the 700D, the 750D and 760D use pentamirror viewfinders, which are a bit dimmer than the pentaprism viewfinders used in top-end models. It’ll be disappointing to some, but hardly surprising given the lack of a real price-hike.

All three viewfinders offer 95 per cent field of view coverage rather than the full 100 per cent, which is again something you’ll need to bump up to the next Canon range to get close to.

Canon has really not led the way when it comes to packing advanced connectivity into its cameras. However, we’re finally just about up to speed: the Canon EOS 760D and 750D have Wi-Fi and NFC, while the 700D has neither.

With the older camera you’ll have to use an EyeFi-style wireless memory card or an expensive Canon wireless transmitter.

The Wi-Fi of the newer models let you transfer photos to a phone easily, and control the camera remotely using the EOS Remote app. 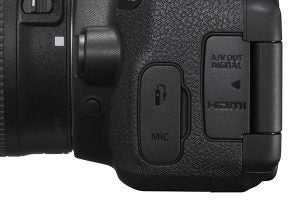 The 700D, 750D and 760D are all APS-C sensor cameras, and to a large extent this dictates the sort of performance you can expect from them, especially at higher ISOs. It’s good, but the generation shift isn’t suddenly going to get you the sort of low noise levels you’d see from a full-frame sensor.

That’s not to say Canon hasn’t maser significant improvements, though. The Canon EOS 760D and 750D share the same sensor, but is a new one. It offers 24.2 megapixels, a significant jump from the 18 megapixels of the 700D.

While we’ve not yet put these cameras through their paces in our camera testing labs, it seems that Canon has worked on its noise reduction and sensor performance because despite the increased resolution, the ISO range has stayed the same. If Canon had not managed to keep noise performance at least as good, we might have seen one of the top ISO sensitivities slip into the extended range — home to the settings that don’t quite meet Canon’s expected performance levels. 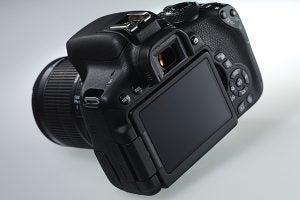 What should hopefully help the 750D and 760D out in the noise stakes is the DIGIC 6 processor, a generation on from the DIGIC 5 one used in the Canon EOS 700D. Despite being newer, the upgrade is only actually enough to see the 760D and 750D level-peg with the 700D on speed.

All three cameras manage burst speed of 5fps, which is the typical of a modern non-speed-obsessed APS-C camera. Speed is one of the lead reasons why some might pay for the upgrade to a Canon EOS 7D Mark II, which offers 10 frames per second burst. It might actually be that Canon is deliberately limiting its speed with firmware in order to keep a performance gap between tthe 760D/750D and the EOS 70D.

There have been more dramatic improvements made to the autofocus, though. Where the Canon EOS 700D offers just 9 focus points, the 750D and 760D have 19. Neither has masses of focus points compared with the 39-point Nikon D5300, but every single one is cross-type, offering top speed and reliability.

All three cameras use on-sensor phase detection pixels to mean you don’t have to rely completely on contrast detection when you’re shooting with Live View or video, which rule-out the use of standard phase detection.

While the vari-angle display is useful for video shooters, Canon doesn’t seem to have much focus on improving video performance in the 760D and 750D. All three cameras offer maximum 1080p video capture at 30 frames per second.

We didn’t expect 4K video when it doesn’t feature in any Canon DSLR at present, but 60 frames per second capture at 1080p doesn’t seem like too much of a stretch in 2015. You don’t get it here.

Which is the best camera?

Two years may have passed since the Canon EOS 700D hit the shelves, but the biggest difference is arguably the layout changes Canon has made to the 760D. Technically the new models aren’t light years ahead, especially when you consider come of the changes that haven’t been made. Yes, having NFC and Wi-Fi is neat, but you could argue they should have featured in the 700D too.

Price drops await, though, so if you’re reading this in early-mid 2015, you might benefit from a bit of patience. Not only will the new cameras soon drop below their recommended prices, the Canon EOS 700D is likely to shed a few pounds as they do.