Yoshi games have been a bit hit and miss over the past couple of years. Yoshi’s Woolly World on the Wii U was a fuzzy, heart-warming delight, but Yoshi’s New Island on the 3DS was an uninspired mess; its ugly, plasticine-style looks were utterly devoid of charm and character.

Happily, the latest Yoshi game for the Nintendo Switch – whose current working title is simply ‘Yoshi’ – is being developed by the crafty folk at Good-Feel, the game developer responsible for both Woolly World and the equally excellent Kirby’s Epic Yarn on the Wii. While we’re a little sad to see the back of yarn Yoshi, this new-felt incarnation looks to be just as cute and adorable.

What’s more, the game’s new camera-flip mechanic looks to offer a truly innovative twist on Yoshi’s traditional platforming, making it one of the most intriguing Yoshi titles we’ve ever played. Here’s everything we know so far. 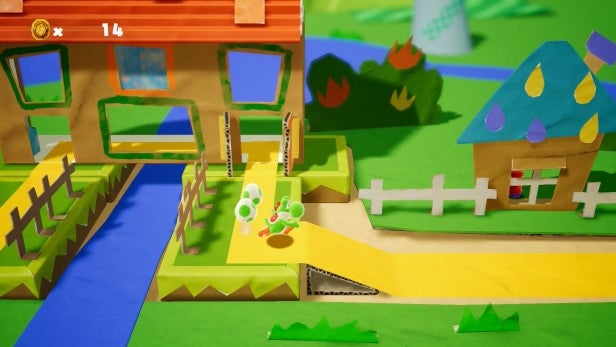 You’ll have to wait at least six months before Yoshi arrives on Switch; right now, there’s only a vague release date of 2018.

Take one look at Yoshi 2018 and you’d be forgiven for thinking it was merely a papercraft version of the Wii U’s rather excellent Yoshi’s Woolly World. Indeed, we wouldn’t even say it was a particularly handsome take on the idea, at least not after the stunning cardboard dioramas of Paper Mario: Colour Splash, which also came out on the Wii U just last year.

However, while its simple block colours and soft, hazy backgrounds might not look particularly enticing, appearances – as they say – can be deceiving, for this is arguably shaping up to be one of Good-Feel’s most intelligent and sophisticated games yet.

This is a studio that’s utterly obsessed with arts and crafts, and nowhere is this felt more keenly than in Yoshi’s new camera-flip mechanic. That’s right. For possibly the first time in platforming history, you can now see what lies behind those gorgeous, hand-crafted worlds by flipping the camera around 180 degrees, allowing you to run both left to right and right to left. 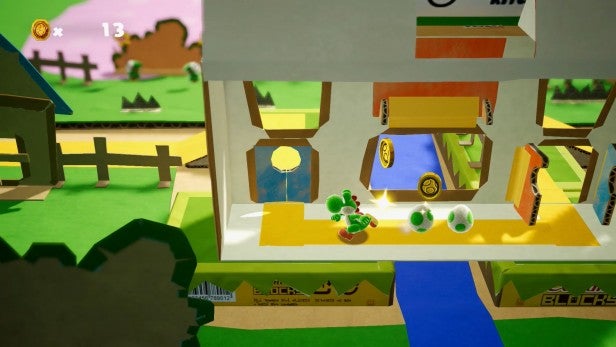 Admittedly, it isn’t yet clear how often you’ll be able flip each level in the final version of the game, since Nintendo told us the team was still figuring out the best way to implement it. One stage we were shown in a hands-off demo session, for instance, had to be completed normally before the flipped version became available as a separate demo, while another let you switch at will.

If we were to make a guess, though, it’s probably more likely that the finished game will have special switches that flip the world at specific points, either in order to carry on with the main level or reveal secret treasure rooms, rather than give you total control.

Regardless of how it works in the end, though, these backstage glimpses are what really makes Yoshi 2018 shine: it lets you see precisely how its child-like creators have cobbled these scenes together. As you’d expect, there’s a ludicrous amount of tape holding everything down, from half-cut toilet roll stumps to newspaper print hedges, while Moo Moo Meadows milk cartons form the walls of makeshift homes and bridges.

It’s the army of Shy Guy stagehands that really made us chuckle, though, as they’re the driving force behind almost every moving part in the entire level – whether that’s slaving away pushing and pulling cardboard boxes with elastic bands, taking cheeky naps behind bits of scenery, or simply waving innocuous pink flowers in the foreground as they hide in a bush.

It’s such a delightful spectacle that you almost feel sorry for them when you have to start pelting them with eggs in order to proceed. Unlike previous Yoshi games, however, you can now aim your egg shots in real-time, allowing you to freely attack enemies at your own pace, instead of relying on its frustrating auto-aim cursor. This is partly because eggs can now be fired into the background as well as the foreground, making for some amusing money shots when you accidentally miss a Shy Guy holding a special red coin and send a cardboard cow spiralling into the distance. 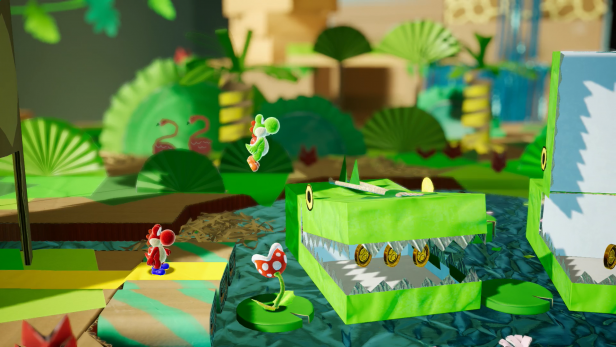 Naturally, collectible items continue to play a huge role in Yoshi 2018, and it’s only by flipping the levels round that you’ll be able to find every last collectible. Eagle-eyed players may be able to spot tiny glimpses of where they’re located on the opposite side of the stage, but even we were surprised by how many lay completely out of sight until we saw the level in reverse.

Two pairs of eyes are always better than one when it comes to treasure hunting, though, so you’ll be pleased to hear the game is also entirely playable in co-op for those who feel like handing out a spare Joy-Con to a friend on the go.

Its current looks might make you yearn for the days of yarn, but with this kind of depth and stunning attention to detail, Yoshi 2018 shows that you should never judge a game by its cover.

Contact via linkedin
Wine Buyer & DWWA Judge
Maggie Macpherson is the group buyer at Jeroboams, she was formerly a buyer Enotria&Coe. Starting out as an assistant buyer, she now covers a wide array of wines from Australia, New Zealand, South…