It carried ginormous expectations, but somehow Nintendo has managed to leapfrog over the bar by a huge distance. Offering the most satisfying gameplay experience of any Mario game to date, Super Mario Odyssey is near-perfect.

Nintendo has always been the best in the business at creating brilliantly creative open world and sandbox playgrounds. Placing its moustachioed mascot at the helm of its greatest titles, each new entry carries with it the greatest of expectations. So how does one compete with oneself? If you’re Nintendo, you create a love letter to everything that has come before, and that’s exactly what it’s done with Super Mario Odyssey, potentially the greatest in the series to date and a true successor to Galaxy.

It’s been a while since Mario has run wild in a sandbox, and Odyssey manages to capture what made Super Mario 64 such a treasure: the love for each Kingdom. While 3D World and the various 2D offerings had entertaining but isolated levels, the decision to return to a sprawling playground proves masterful, as it once again allows the personalities of the worlds to shine. And each can rival those we saw all the way back in 1997. 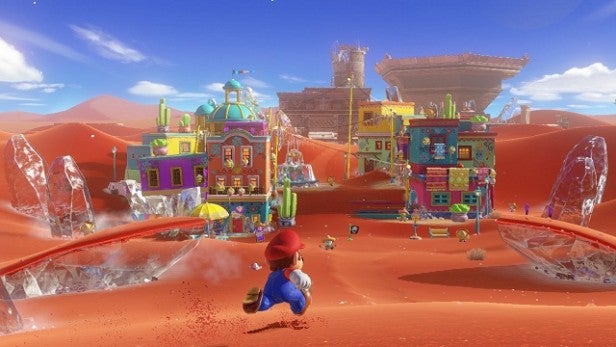 By allowing players the freedom to explore entire worlds to collect dozens of Power Moons – seriously, there can be over 70 to find in each of the Kingdoms – learning every inch of the terrain becomes a joy. As a kid, I knew what lay inside every painting in 64, down to the last detail, and running around New Donk City, Fossil Falls, and every other land in Odyssey is just as addictive. The worlds are simply stunning, each brimming with its own unique personality.

With so much to see and do, learning how to explore it all is one of Odyssey’s greatest strengths, and it helps that Mario controls better than he ever has in order to allow you to do so.

As you may have guessed by now, Mario has teamed up with Cappy, who becomes his hat and offers a range of new abilities. These become the basis for attacks and jumps, and can even be used to take control of iconic characters within the game. For example, throwing Cappy ahead of Mario before jumping on him will provide a bigger front flip, while throwing him while in midair will grant an additional second of air time to make that huge jump. But beyond these advantages, Mario simply ‘feels’ better. 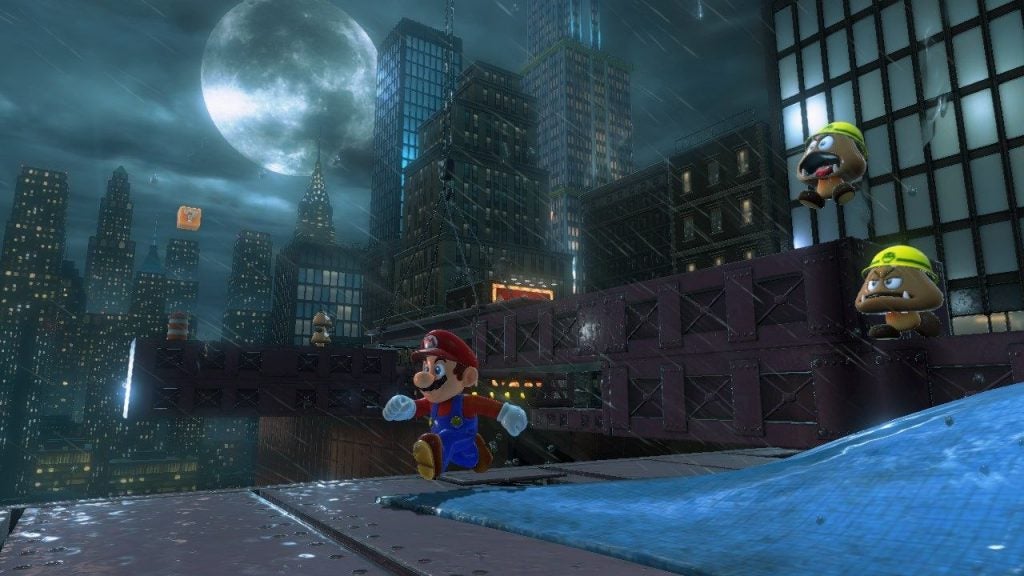 Somehow the controls feel tighter: Mario seems more responsive, and his jumps sharper. Couple this with an expanded arsenal of jumps and attacks, and within a few hours of game time you’ll feel like an absolute master. There was one point where, in order to reach an isolated precipice, I did a long jump, threw Cappy, then did a dive (a new move for Mario where you initiate a ground pound before hitting ‘attack’ so he leaps forward), then bounced off Cappy to land at the cliff’s edge. Nobody being around to high-five me was the only sad part about this monumental achievement.

Again, as well as Mario’s new capabilities, there’s also so much to see and do in every world. Nintendo’s creativity and innovation is at its absolute best here, with so many fun ways to find and unlock Power Moons. Unlike 64, Galaxy and Sunshine (aside from the key story-based Moons), you have to find the Power Moons on your own. There are no hints – simply go out and explore the world. At first I was put off by this, preferring 64’s approach of having a very clear directive for obtaining a Star, but it quickly grew on me. Being able to collect dozens of Power Moons in a single outing, with a keen eye helping find more, I soon fell in love with exploring, interacting, and throwing Cappy in every direction. Finding a Power Moon simply because I dared to venture off the beaten path, or working to reach the tallest point in a map with inch-perfect jumps and throws, felt so good. It encourages experimentation, and richly rewards you for it. On the subject of experimentation, you can now kit Mario out in loads of different outfits. Some are required to reach certain Power Moons, while others are just fun to clad Mario in. There is a ‘Crazy Cap’ store which accepts two currencies: gold coins and purple coins. The purple ones can be collected in every kingdom, but can only be spent in the location they’re found, while gold ones can be collected and spent anywhere.

In an age of microtransactions, it’s refreshing to see Nintendo completely shun them and simply make this a fun thing for players to enjoy, and because of that I quickly became obsessed with it. I wanted to collect every costume I could. It’s a great system that offers no tangible reward other than seeing Mario’s different looks, but the fun of collecting the coins in every kingdom makes it so worthwhile.

It’s weird to discuss spoilers in relation to a Mario game, but the ending of Odyssey (without going into details) is the single greatest ending to any video game I’ve ever played. Not too dissimilar to Halo 3, its closest rival, the level of brilliance on show throughout the climax had me smiling with glee, playing to every nostalgic bone in my body and bringing together every tool shown throughout the journey. It’s simply spellbinding. 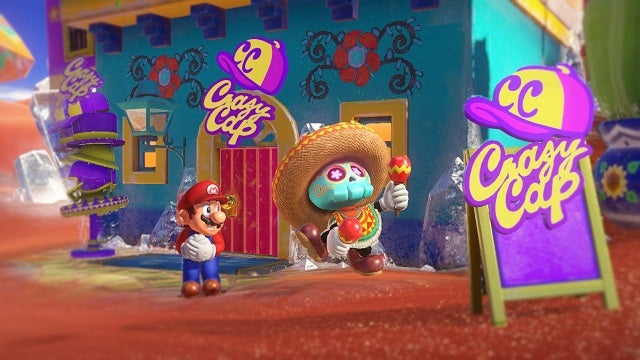 Also, like the best Mario games, the ending is where the fun really begins. So much more of the game is unlocked after the credits roll. As well as going back to collect the hundreds of Power Moons you may have missed, there’s also plenty of brand new things to discover. Nintendo has truly held nothing back in this game.

The only mud I can sling at Odyssey is that, rather bizarrely, some of Mario’s moves are locked for anyone not playing using motion controls. For those using the Pro Controller or taking the Nintendo Switch on the go, a bunch of moves in Cappie’s arsenal will be off-limits, which is strange, considering that is the console’s entire USP.

It carried ginormous expectations, but somehow Nintendo has managed to leapfrog over the bar by a huge distance. Offering the most satisfying gameplay experience of any Mario game to date, Super Mario Odyssey is near-perfect.

Some will debate whether or not it matches Galaxy, but for me it does, thanks to its brilliant reinvention of the sandbox formula and incredible use of so many different tools.

You’ll become obsessed with collecting outfits and Power Moons, and fall in love with every kingdom you visit. Nintendo has had a wonderful 2017, and is rounding it off in style with the best Mario game you’ve ever played.