Exclusive to Wii U
The Wii U won’t go down in history as Nintendo’s finest console, but it hasn’t half served up some juicy platformers. Along with the exclusives – New Super Mario Bros. U, Super Mario 3D World, Donkey Kong: Tropical Freeze, Kirby and the Rainbow Paintbrush – we’ve had definitive versions of cross-platform titles, including Rayman Legends, Trine 2 and Shovel Knight. All in all, that’s made Nintendo’s noble failure a must-have console for fans of the genre. So it means something when we say that Yoshi’s Woolly World can stand up tall in such august company. As a platformer, it’s right up there with the very best.

It’s the style that hits you first. Yoshi’s Woolly World takes you to some strange, parallel Nintendo universe where everything is fashioned from textiles, and particularly wool. Not only are the Yoshis of Craft Island knitted, but much of the scenery, the platforms, the classic Nintendo baddies and the various obstacles along the way are too. It’s a little reminiscent of the hand-crafted look of LittleBigPlanet, but all done in an exuberant Nintendo style with an impressive attention to detail. 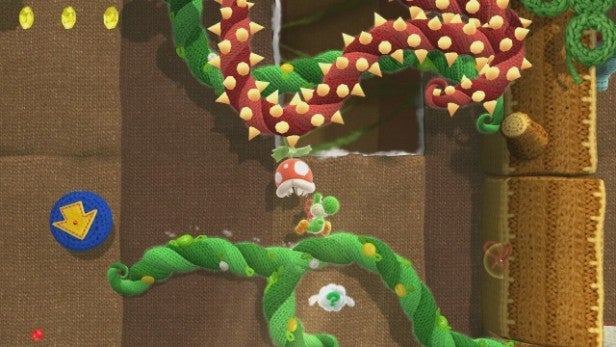 You can see this in the way that shadows fall upon the surfaces or light picks out the detail in the stitching, not to mention the way that the ground sinks gently under Yoshi’s feet, as if he’s racing across a well-stuffed cushion. You may be able to name better looking games, but you’d struggle to come up with many that are so consistent and wonderfully obsessive in the pursuit of a single style. This truly is a woolly work of art.

It’s not just about the looks, either. Previous Yoshi games have seen the cuddly dino sucking in enemies with his enormous tongue then, through some magical digestive system, dropping them out at the other end as eggs. These eggs can then be used as missiles, dispatching enemies, smashing obstacles and activating secret switches. Well, Woolly World does things differently, with Yoshi’s tongue breaking the baddies down into their constituent yarn, then plopping out a ball of wool at the other end. Loose bits of wool protruding from the scenery can also be sucked up, literally unravelling some obstacles thread by thread. And when enemies are hit by one of Yoshi’s woolly missiles, you’ll even see some tangled in the cosy-looking fibres. 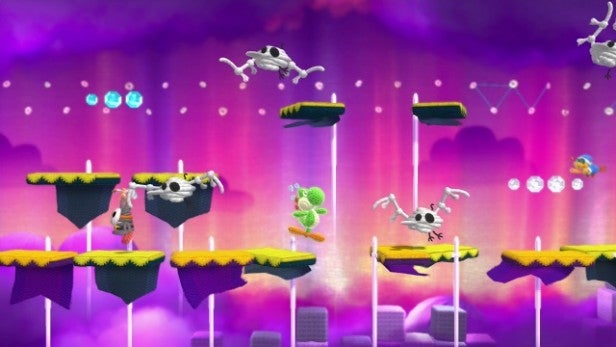 If this sounds familiar to Nintendo stalwarts, it’s because Yoshi’s Woolly World is a spiritual successor to 2010’s Kirby’s Epic Yarn, and developed by the same team at Good-Feel. They’ve clearly got textiles on the brain, but who cares when they weave games as good as this?

What makes Woolly World so brilliant is that it both plays up to and messes with our expectations of a Nintendo platform game. There’s nothing too unusual about the plot, of course, which sees a woolly version of the wizard, Kamek, turning the Yoshis of Craft Island into balls of yarn, which need to be rescued by the two remaining dinos (the game supports drop-in/drop-out co-op play). The structure, meanwhile, is classic Super Mario, with six worlds of eight regular levels, with a mini-boss halfway through and a bigger boss battle at the end. 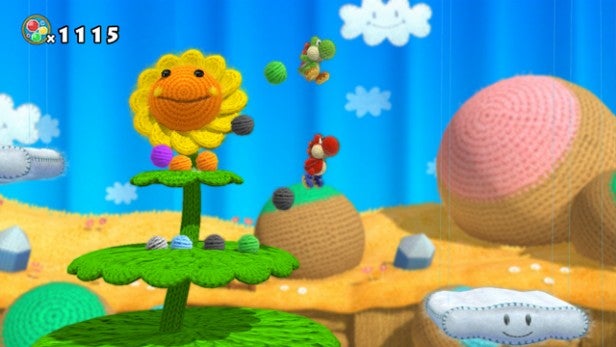 In a way, there’s nothing unexpected about how Woolly World plays, either. By now we’re used to Nintendo’s platformers, and the way they feed in new enemies, mechanisms and mechanics, then use them in increasingly smart and tricky combinations to test your skills, your curiosity and your puzzle-solving nouse. Woolly World certainly hurls them in at an impressive pace, grabbing an impressive selection of favourites from Super Mario World, Yoshi’s Island and New Super Mario Bros. U, then giving them all a nice woolly makeover.

Between the fast-disappearing rainbow platforms, the huge, shy-guy squashing, ice-block crushing snowballs and the ghostly sheets that reveal concealed and otherwise insubstantial platforms, it can be hard to keep up. And that’s without such spectacles as the screen-filling fish, ghosts and piranha plants, or the little chicks that leave traversable vapour trails behind them. Yet there’s always something new to make you smile in every level. Woolly World also wins easy points for bringing back Poochy, the ever-lovable, ridable dog from the original Yoshi’s Island, who turns up to help you tackle spiky territory.

Woolly World also copies Epic Yarn’s trick of transforming our hero into other guises, like a mining drill, a floating umbrella or a jet-fighter, ready to blast. These sequences don’t last long, but they’re a lot of fun. They only increase the feeling that this is a game where just about anything might happen. 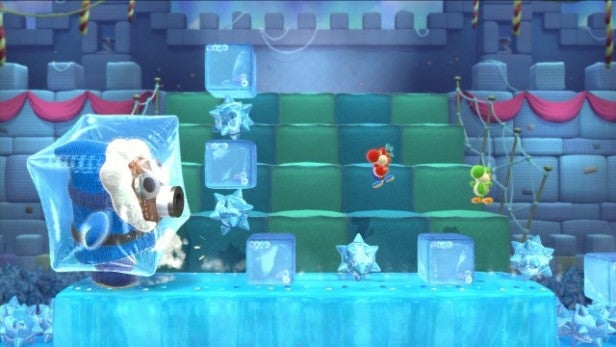 What sticks with me most, however, are the moments where Woolly World plays against your expectations, often transforming an enemy or an obstacle into an opportunity you can exploit. Sure, that jet of water might send you flying into a Piranha Plant’s gaping mouth, but it could also take you to a hidden area full of coins. A walking bomb can be sucked in and hurled out at other enemies, while flames can be siphoned from the surface of a critter and used to melt blocks of ice. Woolly World doesn’t just want you to prove that you can get from A to B despite all the obstacles; it wants to see whether you have the smarts to take the tools that are given to you and use them in unexpected ways. It’s a game that rewards the curious, not just the fast-fingered.

It’s the collectibles that make all the difference. Each level has five bundles of yarn and five daisies hidden away, the former unlocking differently coloured and patterned Yoshis, the latter unlocking bonus games. Spotting them is challenging and getting to them even worse, which means that simply conquering the levels is by no means the be-all and end-all of the game. In terms of difficulty, Woolly World is no Donkey Kong: Tropical Freeze or New Super Mario Bros. U, but it’s not a game you’ll finish properly in a hurry. 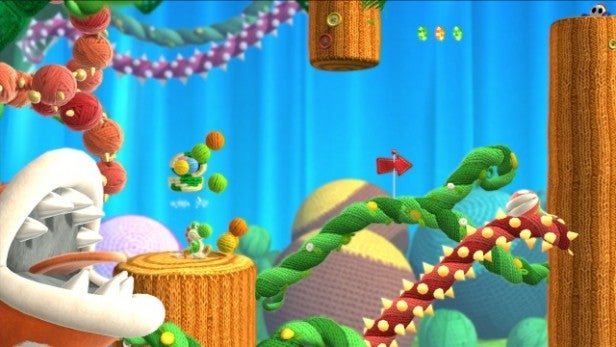 Woolly World also has Nintendo’s best solution for difficulty yet. Yoshi has always been the most forgiving of Nintendo’s heroes, finishing jumps with a last-minute, panicked scramble for altitude that might just get you to the next platform. Beyond this, Nintendo has added a new and optional Mellow Mode, which gives Yoshi wings with which you can all but float you way through each level, instantly making the more challenging levels accessible to those without the skills or persistence to make it through the hard way. Finally, the various gems you collect can be spent on power badges, which you can use to conquer any levels that are holding you back. In the event that a Poochy companion, bigger wool balls or invulnerability to fire can’t help, you can bring in the pricey badge that stops you falling into pits or chasms, or the super-expensive one that finishes the level for you.

This might seem like a cop-out, but it makes Woolly World a game that anyone can enjoy on any level. While I’ve taken pride in tackling levels in Normal Mode with no badges, other members of my family have been playing in Mellow Mode and using the badges where necessary to smooth their path, and between the lovable graphics, the inventive gameplay and the constant search for missing yarn bundles and daisies, we’ve all been having a great time. What’s more, we’ve been doing so separately and in co-op together, chuckling as one Yoshi accidentally gobbles the other then spits him out: a mechanic you can actually use to your advantage. 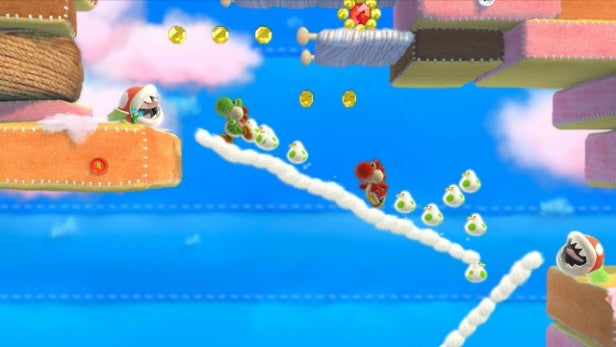 Are there flaws in the pattern? Sure there are. Checkpoints are a little too spaced out for our liking, and the game doesn’t save any yarn bundles or daisies you keep when you die, so you need to remember to get them when you respawn. And while we’re big fans of the brilliant boss battles, it’s a shame that the game doesn’t checkpoint right before them, as you may have to battle through the same section of level several times if you keep on dying. Frankly, though, the game’s generous attitude to difficulty makes neither one a deal-breaker, and you can always tackle a bit in Mellow Mode then switch back to Normal once it’s done.

Verdict
Yoshi’s Woolly World is Nintendo doing what it does best, then proving that it still does that thing better than just about anyone else. It’s a smart, imaginative and beautifully constructed platform game that scales up for the hardcore and down for the most casual gamer, while packing in so many ideas and so much heart that anyone should have a brilliant time. More than just a pretty platformer, it’s right up there with the finest on Wii U.