A cut above other wireless extenders, the Netgear Nighthawk AX8 WiFi 6 Mesh Extender (EAX80) can work with your existing router to create a powerful mesh system or you can use it to upgrade an old system to Wi-Fi 6. Simple set up and powerful performance make this an easier route to Wi-Fi 6 than upgrading your entire system, but the trade-off is that you don't get all the advanced features that you'd get with a new router.

The truth is that most Wi-Fi extenders are a bit rubbish. They might give you Wi-Fi where you didn’t have it before, but they’re typically a pain to set up and need a second network name.

The Netgear Nighthawk AX8 WiFi 6 Mesh Extender fixes both problems and can work as a mesh system with any router or it can be used to upgrade a router to a Wi-Fi 6 one.

It’s a touch expensive, as are all Wi-Fi 6 routers, but it could still be a cheaper way to upgrade if you’ve got poor wireless in your home and want a better connection.

Tall and thin (279 x 197 x 106mm) the EAX80 is a rather plain-looking box. That’s not much of a problem, as this roughly book-sized extender can be put unobtrusively out of the way, and it won’t gather much attention.

Around the back are four Gigabit Ethernet ports, which you can use for wired devices, say adding extra capacity to a home office. 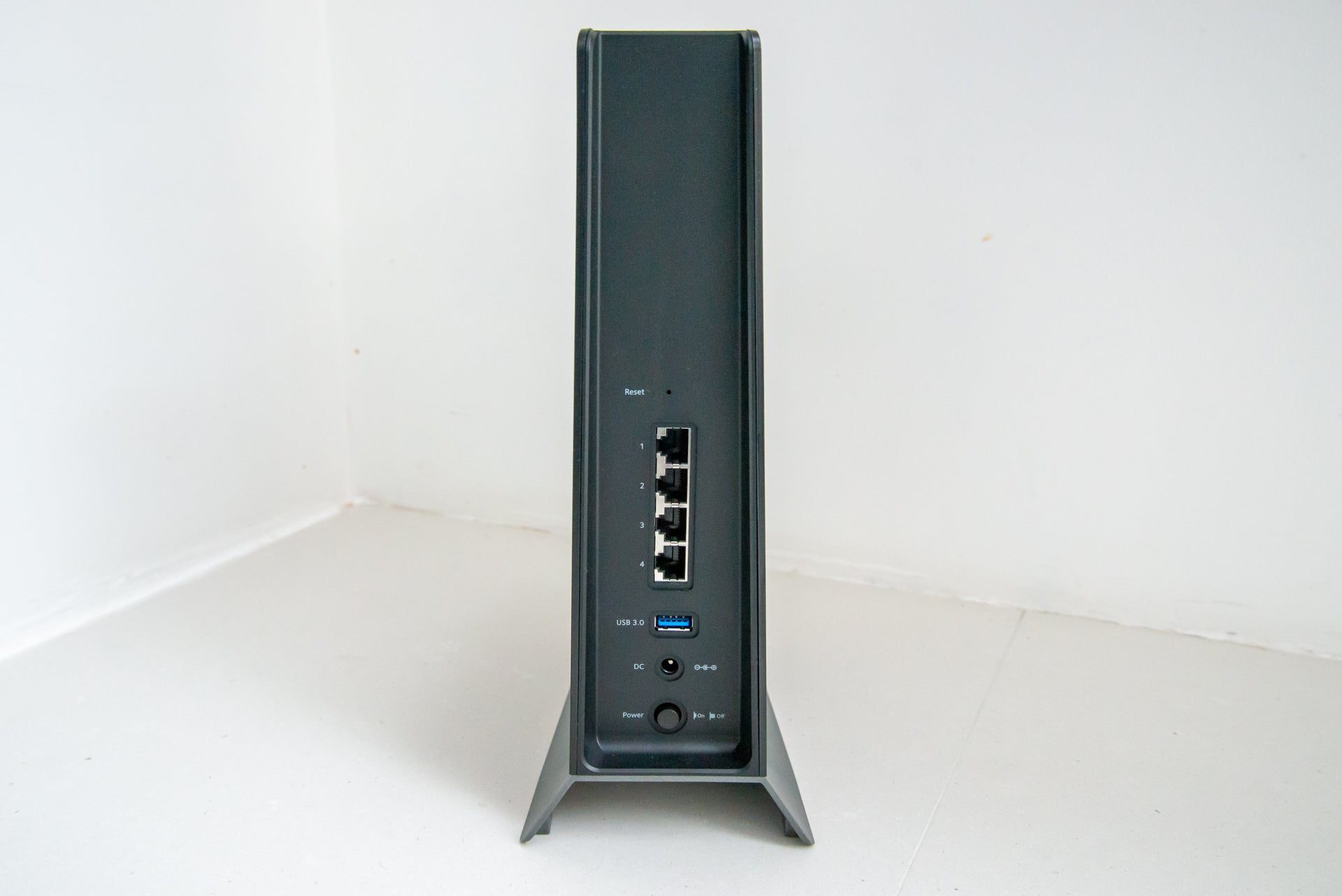 You get four Gigabit Ethernet ports for wired devices

The mesh part in the name comes from the fact that the EAX80 uses smart roaming. Without this, wireless devices try and maintain a connection regardless of distance, so as you move from your router the signal gets worse; smart roaming will get devices to switch to the EAX80 when its signal is stronger.

The only limitation on this system is that the Netgear Nighthawk AX8 WiFi Mesh Extender only has dual-band Wi-Fi, which has to be shared between connecting devices and as the connection back to the wireless router. If you buy the Orbi Wi-Fi 6, you get a tri-band system, with a dedicated wireless connection between each satellite.

You can also use the access point (AP) mode. This requires the EAX80 to be connected to your existing router via an Ethernet cable. You miss out on the smart roaming features, but you can use the extender as an upgrade to an existing router, turning off your current Wi-Fi. Alternatively, you can use Ethernet to place the extender a long way from your main router (I put mine in a garden office).

Technically, if you use AP mode, you should use a different network name, as without smart roaming your devices may not switch to use the extender even if it has a stronger connection.

As an extender, you get fewer features on this product than you do with a full Nighthawk router, so you don’t get the same access control features, and there’s no guest network. You can manually change the channels that the 2.4GHz and 5GHz networks run on, although you must connect to the web-based management interface, rather than using the app. 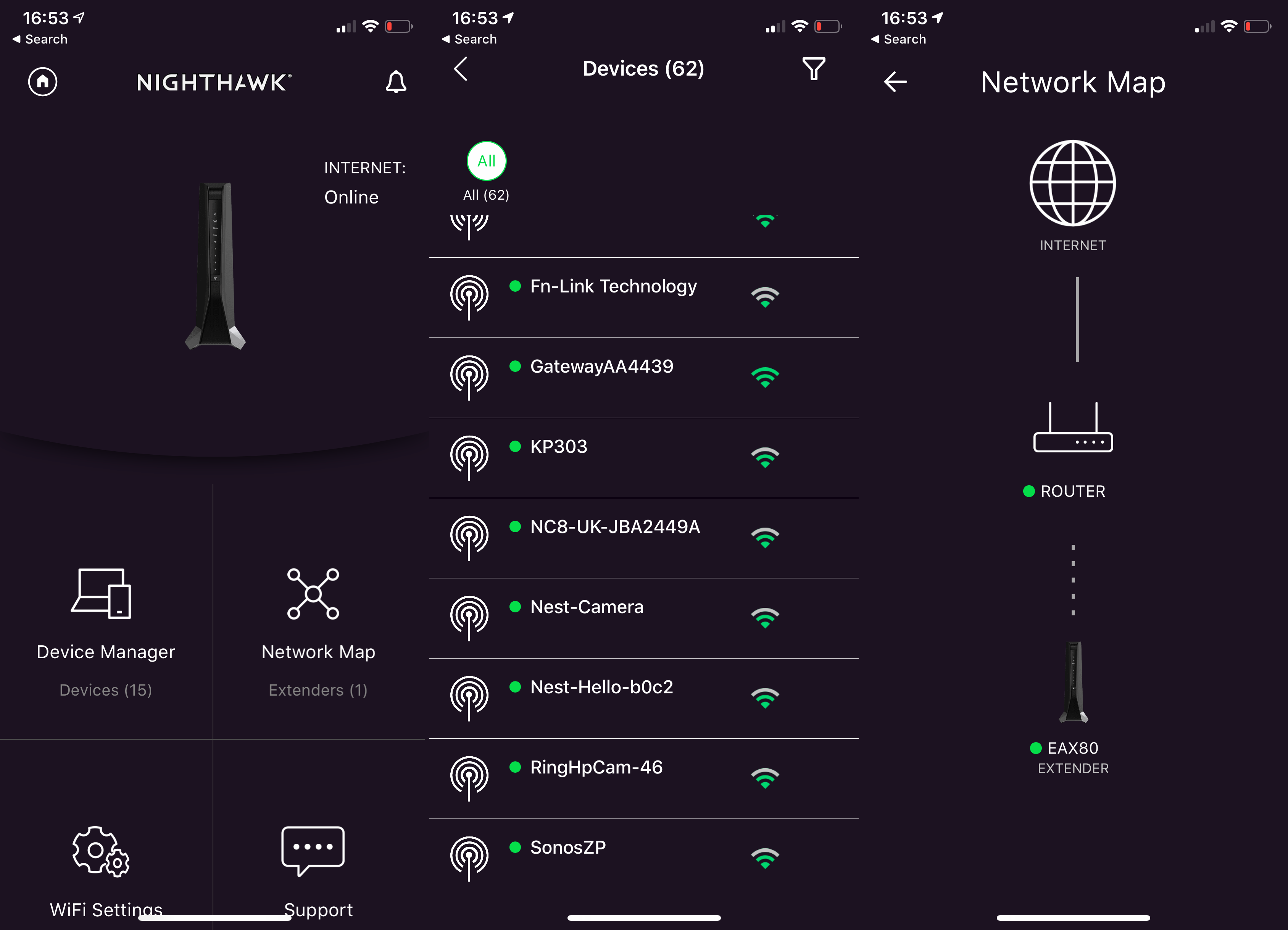 You can control the extender using the Nighthawk app

Of course, you can have the 2.4GHz and 5GHz networks appear under the same name, with the router choosing which band a device should connect to, or you can split the two. This is an eight-stream extender, running with four 2.4GHz streams at a maximum of 1.2Gbps, and four 5GHz streams running at 4.8Gbps – see what is Wi-Fi 6? for more information on streams and why they’re so important.

To test the Nighthawk AX8 I connected it via Ethernet to my existing router. I used a laptop upgraded with a Wi-Fi 6 card. I had the extender set to use a single network name, so the laptop connected to the 5GHz channel.

I got average throughputs at close range of 457.99Mbps, 313Mbps on the first floor and speeds dropped to 189Mbps on the second floor. The Netgear AX8 router, which uses the same Wi-Fi standard and speed, but has larger antennas, was consistently faster, and the Orbi Wi-Fi 6 mesh system gives better range. Both are more expensive, it has to be said. 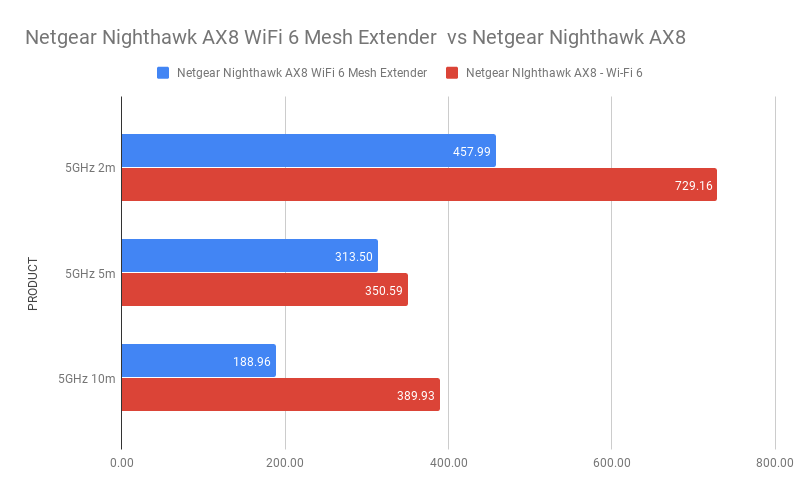 If you’re looking to upgrade your wireless and you want Wi-Fi 6, the Netgear Nighthawk AX8 WiFi 6 Mesh Extender is a powerful and flexible way to do so, and it’s the best wireless extender that I’ve tested. What you want to achieve needs to come into it, though.

If you want more features and options, such as a guest network, then upgrading the router makes sense. The Netgear Nighthawk AX8 is faster than this extender, although it is a touch more expensive; the Netgear Orbi Wi-Fi 6 mesh system gives you more options too, and is faster at range, largely due to its dedicated wireless network for communication between satellites.

The EAX80 works well in three cases. First, if you’ve got a router that you’re happy with but the Wi-Fi is a bit old or slow, then this is a powerful upgrade. Secondly, if you’ve already got a router with decent Wi-Fi, then this is an extender that works with your wireless, giving you the benefits of a mesh network. Finally, if you buy a Wi-Fi 6 router today, then this gives you a mesh upgrade for the future if you need a bit more range.

Provided you fall into one of those categories, this is a powerful and flexible mesh upgrade for any system.