A powerful Wi-Fi 6 router, the Netgear Nighthawk AX8 delivers some of the fastest throughputs we've seen, even when using older Wi-Fi 5 devices. The only real issue is the price, with this router significantly more expensive than existing Wi-Fi routers. Nevertheless, if you need the best and are looking to future-proof then it's a great buy; if you don't need Wi-Fi 6 yet then you can save quite a bit of cash by looking elsewhere.

What is the Netgear Nighthawk AX8?

The number of Wi-Fi devices has increased and the speed of broadband is on the up, pushing our Wi-Fi networks to the limits. Running the latest Wi-Fi standard, Wi-Fi 6 (also known as 802.11ax), the Netgear Nighthawk AX8 is designed to cope with these increasing demands, ensuring your wireless network runs smoothly whilst future-proofing your home.

For the most part, the router does a good job. It powered through our tests with today’s technology, upping speeds again when tested using a Wi-Fi 6 network adapter. However, the high price and comparative lack of features may mean that the Netgear Nighthawk AX8 is a unit for those who demand the best performance. 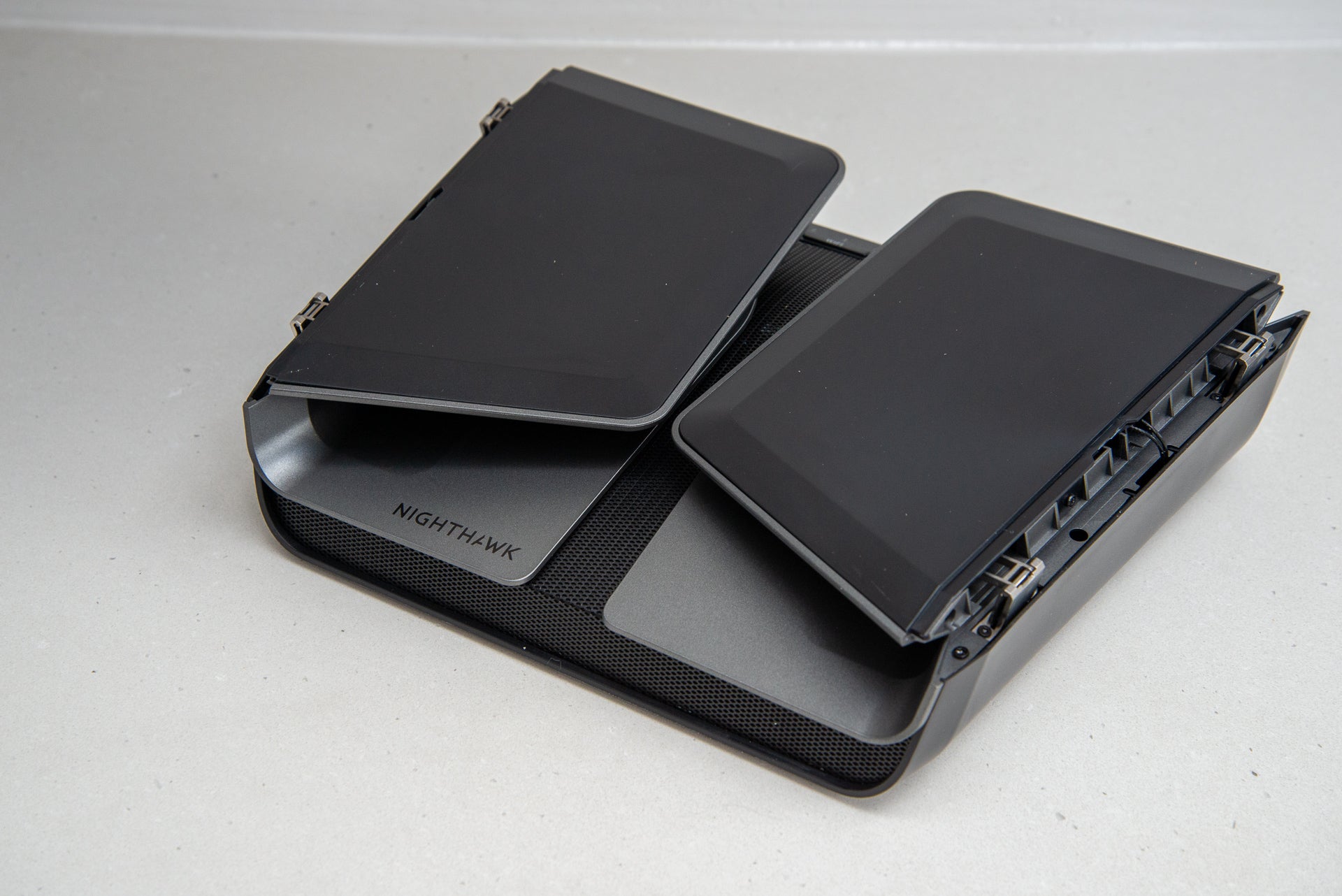 When Netgear built the Nighthawk AX8, it certainly wasn’t messing around. It comes with its “wings” folded down; unfold and lock them into place to position the antennas at the perfect angle. In the final position, the AX8 looks like a stealth bomber or an Imperial Shuttle from Star Wars. Placement on a desk isn’t essential, since it has a couple of wall-mount slots on its rear.

On top, the router has a button to toggle the Wi-Fi on and off, and there’s a WPS button for quick device connection to your router. 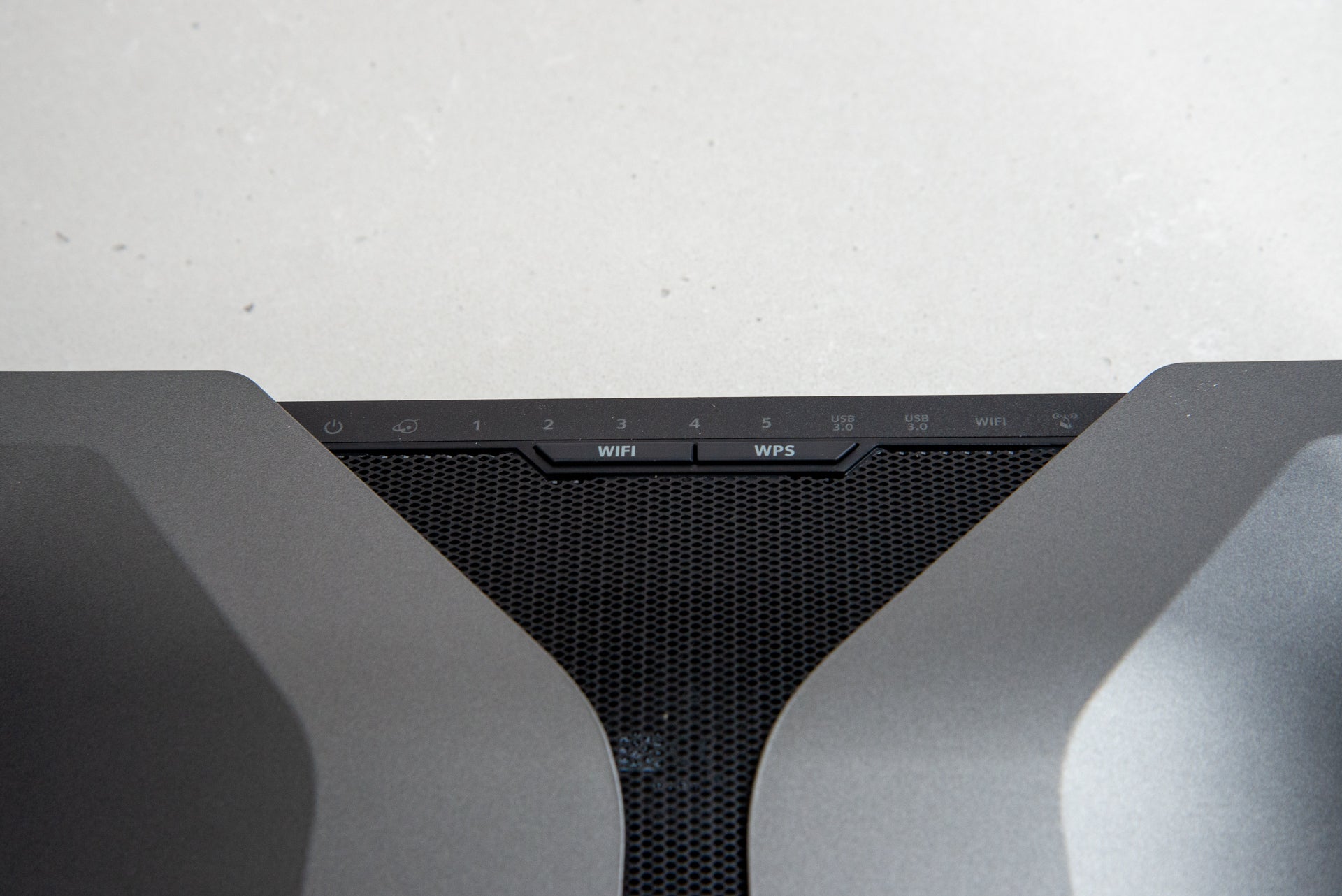 The WPS and Wi-Fi buttons are easy to reach

Around the back it’s pretty much standard router, although you’ll notice there are five Gigabit Ethernet ports rather than the regular four. This may not sound like much, but an extra wired port is always handy, providing that bit more flexibility. 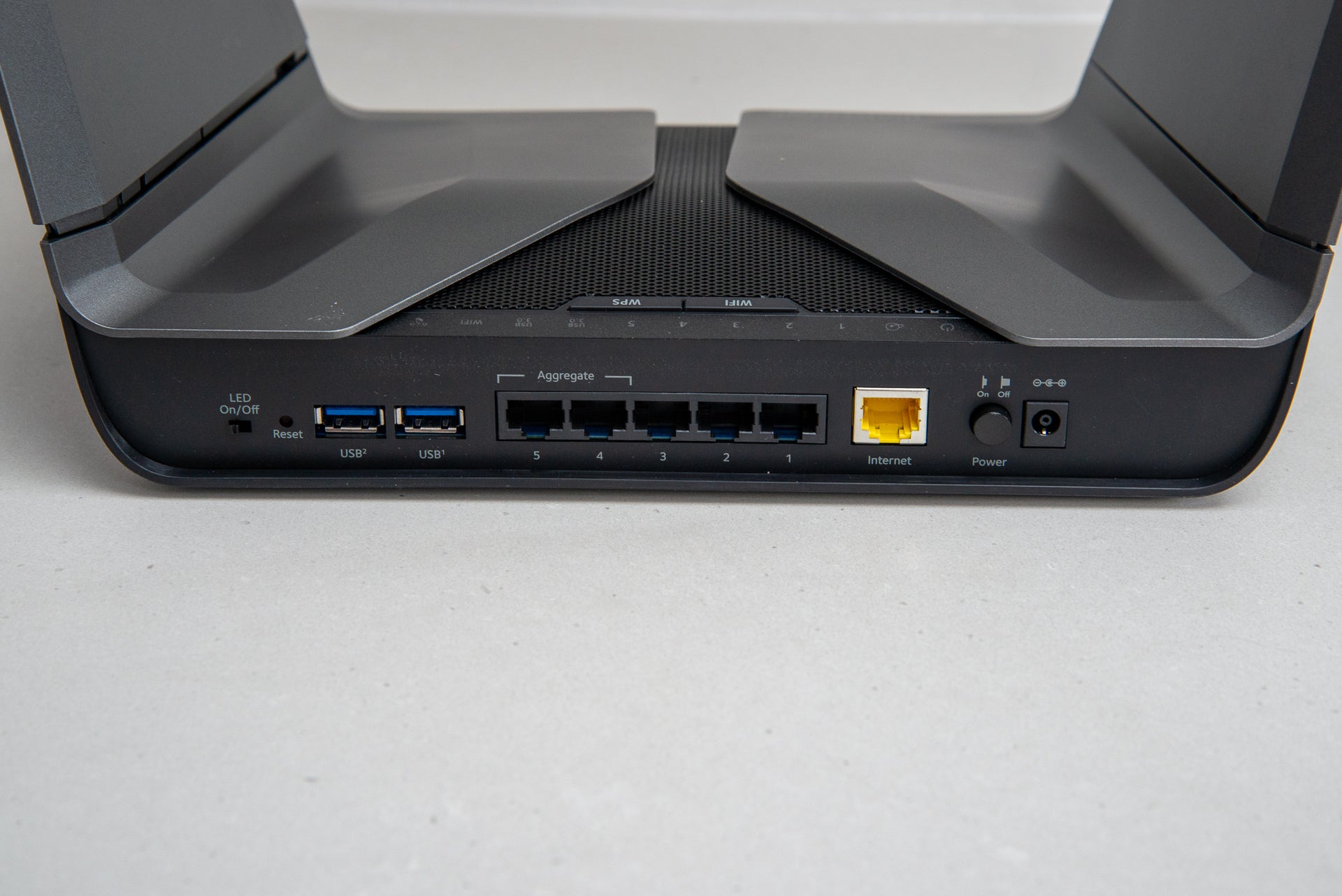 Two of the Gigabit Ethernet ports can be aggregated to give a 2Gbps pipe, and you can also aggregate the WAN Ethernet port with the first Gigabit port in the instance you have super-fast broadband.

You get two USB 3.0 ports for sharing storage, and there’s a physical switch to turn off the router’s LEDs. Handy, if you have the router in a room where flashing lights would prove a distraction.

The Nighthawk AX8’s biggest sell is that it uses the latest Wi-Fi 6 (802.11ax) standard. Built to make network congestion a thing of the past, Wi-Fi 6 requires clients that support the same standard to get the most out of the router – although older Wi-Fi 5 (802.11ac) devices can still connect. So far, we’ve had the Samsung Galaxy S10 and iPhone 11 smartphones, and laptops and other devices will arrive over the coming year.

Our guide to Wi-Fi 6 explains more about the standard, but the main points to remember are that 802.11ax increases the amount of data that can be transmitted at once (it’s a 25% boost over 802.11ac), and it improves the way that clients talk, giving each one more resource and therefore reducing pressure on the network.

The Netgear Nighthawk AX8 is an 8×8 router, which means that it has eight individual streams at its disposal, each providing its own dedicated bandwidth. Streams can be used in different ways. For example, eight clients can connect using a single stream, or you can have four 2×2 clients connecting, using two streams each for double the performance.

Configuration of the router is via the Nighthawk app, which is available for iOS and Android. The layout is much the same as the Orbi app. It’s a big and friendly interface that puts the main options up-front. 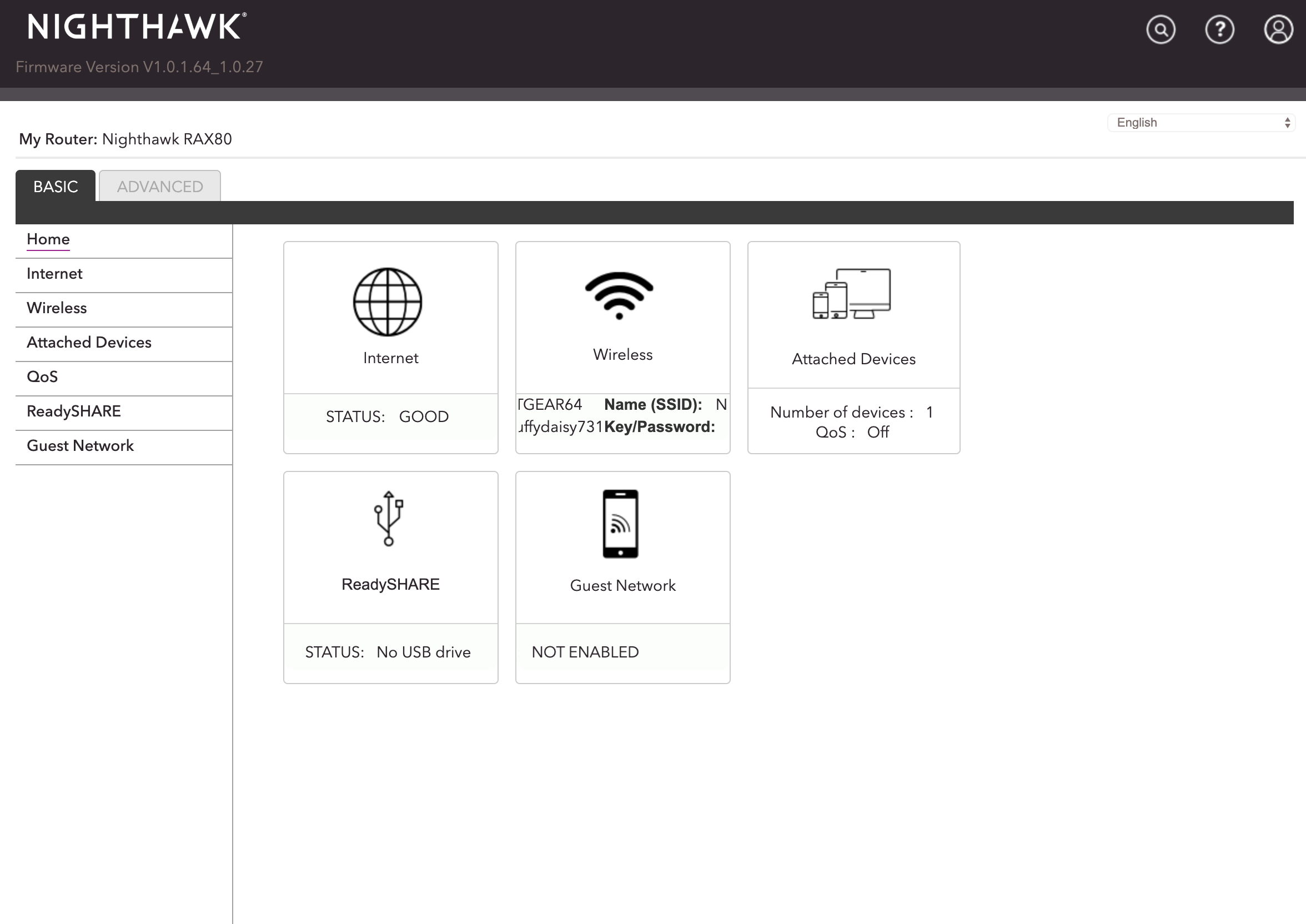 The Nighthawk app makes the router easy to manage

By default, Netgear has separated the 2.4GHz and 5GHz networks into two, but you can join them under one network name. If you do, the router then pushes connecting devices towards the best channel based on range, performance and ability. I recommend doing this, since it takes the pain out of managing networks or having to switch a client manually.

Compared to the Orbi, there are a few features missing. You don’t get parental controls powered by the Disney Circle app, nor do you get the option for Security via the Netgear Armor service.

As with the Orbi system, if you want more control – such as configuring port forwarding or turning on BT IGMP proxying to make YouView play nicely – then you need to turn to the friendly web interface.

I’m pleased to say that the AX8 is exceptionally fast. Testing first with a 2×2 Wi-Fi 5 MacBook Pro, capable of using two wireless streams, I saw the best results I’ve seen from a single wireless router. However, these weren’t by a huge amount: the average upload and download speeds were 674.23Mbps at 2m, 277.12Mbps at 5m and one floor up, and 354.37Mbps at 10m on the second floor.

That’s a healthy speed improvement over the older standard and demonstrates the capabilities of Wi-Fi 6. 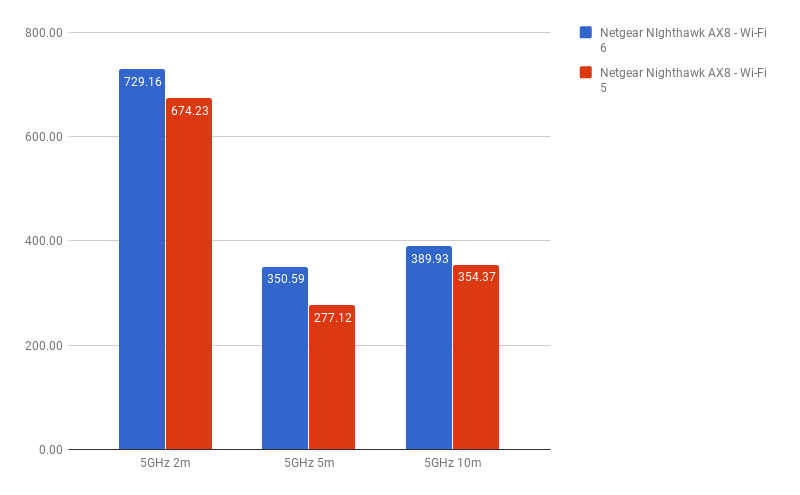 Should I buy the Netgear Nighthawk AX8?

There’s no doubting that the Netgear Nighthawk AX8 is fast – it increased speeds for our Wi-Fi 5 devices and went even faster with a Wi-Fi 6 laptop. Really, this is just the start of Wi-Fi 6, and the true test will come when there are a greater number of 802.11ax clients, all trying to use the network at the same time. As such, the Netgear Nighthawk AX8 is an expensive router and an investment in the future.

Whether or not that investment is worth it for you will depend on the type of wireless network you have today. For those with a wireless mesh network, such as the excellent Netgear Orbi, there’s less incentive to change – by distributing your wireless network to different satellites, you’re already relieving some of the strain. And, there’s a Wi-Fi 6 version of the Orbi coming soon, which will help to distribute your wireless network with the added benefits of what the new standard brings.

However, for those with an older, single router, the AX8 offers a definite improvement – one that will get better with the more Wi-Fi 6 devices you buy. Yet, the comparative lack of features right now alongside a high price means that the Netgear Nighthawk AX8 is more a product for those who want the fastest headline speeds. Those looking for a cheaper upgrade should find that a Wi-Fi 5 router will happily serve their needs today, and Wi-Fi 6 can be bought into in the future when prices have come down.