LG Watch Sport vs LG Watch Style: Which new LG smartwatch should you buy? Here’s a guide to help you choose.

Google’s Android Wear 2.0 software is finally live, and LG has launched two new smartwatches to go with it: the LG Watch Sport ($349) and LG Watch Style ($249).

The former is designed for feature-hungry users who have an interest in fitness, while the latter is more of a catch-all solution for anyway wanting an attractive smartwatch.

While the two watches are actually very similar, there are some core differences that you’ll need to know about before making a purchasing decision. In this guide, I’ll answer the following questions:

But if you don’t care about all of that and you just to quickly decide on a smartwatch, scroll down to the bottom of this article for a summary.

LG Watch Sport vs LG Watch Style Release Dates: When can you buy them?

When you can buy the new LG watches depends on where you live.

LG has also confirmed that customers in the UK, Canada, Russia, Saudi Arabia, South Africa, South Korea, Taiwan and the UAE will be able to purchase both watches at carriers and retailers “in the coming weeks”. 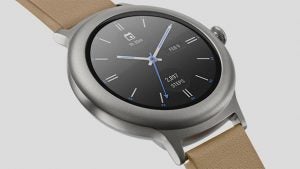 The big news about the LG Watch Style and LG Watch Sport is that they’re the first smartwatches to run Android Wear 2.0 straight out of the box.

The design is one of the biggest differences between both of LG’s new watches. That’s important because you’ll likely be wearing it constantly, so you’ll want it to look decent.

LG says that the LG Watch Sport is built for people who “enjoy dynamic, athletic lifestyles”, and that shows in the watch design. For a start, it’s fairly thick at 14.2mm, as you’d expect from a sporty watch with plenty of features. It also ships with plastic straps and comes in supposedly sporty colour options like “Titanium” and “Dark Blue”. 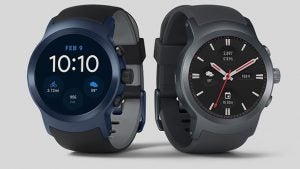 It’s also rated at IP68 water and dust resistance, which means it can be submerged in water at a depth of 1.5m for 30 minutes. We don’t recommend doing that; instead, treat it as assurance that it won’t crap out during a run in the rain.

By comparison, the LG Watch Style is far more dainty, with a thickness of just 10.79mm. It comes in Apple-esque colour options like “Silver”, “Titanium” and “Rose Gold”, and ships with genuine Italian leather straps.

But the downside of this focus on aesthetics is that LG has only proofed the LG Watch Style for IP67 water and dust resistance, which means you’ll get away with using it in the rain, but don’t dare drop it down the loo. You should also be very careful to avoid getting the leather bands wet, as leather isn’t waterproof. 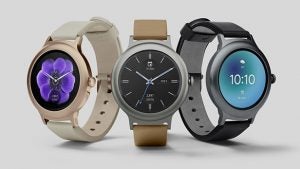 Both the Watch Sport and Watch Style also share wireless charging tech that works with LG’s custom dock. And they both feature a rotating side button that can be used to scroll through the watch interface, as well as for interacting with apps and checking notifications. It’s mostly handy for when you’re wearing gloves in chilly winter months, though.

There are also some key differences in terms of hardware, because LG intends these watches to be used in different ways: one is a sporty watch, the other is more of a luxury show-piece. 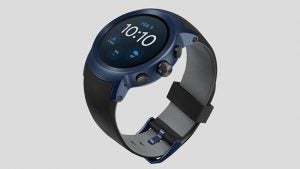 The Sport also has more bonus features. For instance, you’re getting a dedicated PPG heart-rate sensor, built-in GPS, an NFC chip (for mobile payments), and a Barometer. But perhaps the biggest difference is that the Sport has built-in 3G/LTE connectivity, which means it can connect to a mobile network and thus can be used as a standalone mobile device – just like a smartphone.

The only real advantage the LG Watch Style has is that the display is smaller, thus making the overall watch more compact, which may suit some users. But when solely measured on performance, the Sport wins out.

LG Watch Sport vs LG Watch Style: Will they work with an iPhone?

The good news is that whichever watch you buy – the Sport or the Style – they’ll both be compatible with iPhones. Here’s LG’s official statement on the matter:

“Another improvement which should open the device to a whole new range of potential wearers is that the watch is compatible with iOS. This means you can combine the benefits of an Apple smartphone with the excellence of LG’s cutting-edge wearable device, regardless of which OS your smartphone is running.”

So which one should you buy? Well we can’t say for certain until we’ve reviewed the products, but we do have some early conclusions.

Buy the LG Watch Sport if you want a fitness wearable, and like the design. The LG Watch Sport is a better-equipped device for fitness fiends, offering a dedicated heart-rate sensor, built-in GPS, and a more rugged design. It’s also got support for cellular connections, so you really can use the Sport as a standalone device when running, even if your phone is at home.

Buy the LG Watch Style if you don’t care about fitness, and prefer how it looks. If health isn’t your thing and you just want an attractive Android Wear watch, definitely consider the LG Watch Style. It’s very pretty and, while not as feature-packed as the Sport, looks sure to be a capable wearable device. Plus, it’s $100 cheaper.

If you want health tracking, but don’t really want a smartwatch, consider buying a dedicated fitness tracker instead. Some of you may not even need a smartwatch. If you’ve already got a normal watch that you love, it’s worth considering a fitness tracker. You can stick it on your spare wrist and just get on with your health-related activities – and save a fair amount of money in the process.

Check out our best fitness trackers guide for help there.

Related: Which Fitbit should you buy?

What do you think of LG’s new smartwatches? And which would you prefer? Let us know in the comments below.