Apple’s October 30th Special Event has just wrapped, giving us a wealth of yet more delicious hardware from the company in 2018, including two new iPad Pros.

With the recent return of Microsoft’s Surface line, we wanted to see how the fresh Microsoft Surface Pro 6 stood up against Apple’s newest tablets.

Microsoft made a statement when it entered the Surface line into the hardware space and this latest generation is more of the same. The milled magnesium build means the Surface Pro 6 is lightweight but durable, the integrated kickstand is great for letting you prop the machine up at any angle, meaning it’s well-suited for typing, touch and stylus work, plus this generation comes in a new matt black finish.

As with every previous generation, the Surface Pen and Type Cover keyboard that the Surface Pro 6 is almost always pictured with within official imagery are actually sold as separate extras, that’ll cost you an extra £100 and £125, respectively. 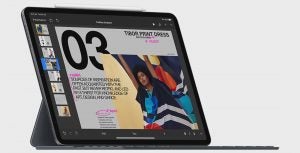 Strangely, Microsoft still seems reluctant to adopt USB-C, meaning the Pro 6’s main connections consist of a mini DisplayPort and a single USB-A port. The strangest aspect of all? For once Apple has shown more willingness to adopt a widely-used connection type.

In a long-rumoured but still surprising move, both of the company’s new iPad Pros replace its own Lightning connector with USB-C. This means greater versatility, with support for all sorts of third-party devices and peripherals; allowing a direct connection to everything from digital cameras to (up to) 5K resolution external displays.

While Apple might have beaten Microsoft to the punch with USB-C here, that is the only port on these tablets. There’s not even a headphone jack anymore – one omission the Surface Pro 6 doesn’t suffer from. There’s also no way to physically expand the storage space on Apple’s tablets either.

Like the Pro 6 and the Surface Pen, the 2018 iPad Pros support Apple’s newly revamped Apple Pencil 2, which implements tap gestures as well as all the functionality of its predecessor (such as tilt and pressure recognition). It also magnetically attaches to the side of these new iPad’s bodies – a trait that Surface tablets have been able to offer for years now. 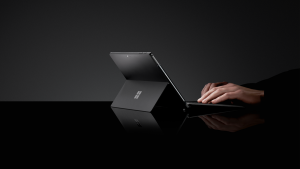 While we’ll get to how powerful these machines all are, one aspect that the Surface simply cannot compete on is portability. Despite sitting either side of the Surface Pro 6’s 12.3-inch display size, both new iPad Pros are smaller, thinner and lighter. You don’t benefit from the Surface Pro 6’s integrated kickstand but the thin (recycled) aluminium unibody tablets should be easy enough to wield without one.

Not only are these iPads lighter and thinner than the Surface Pro 6 but based on Apple’s claims they’re apparently more powerful too. The enhanced Apple A12X Bionic chip supposedly offers enough oomph to trump 92% of the laptops and similarly-classed machines out there right now, even those using 8th-generation Intel chips like the Surface Pro 6.

Unlike Apple’s approach, where price only affects storage and connectivity, for Microsoft’s machine, colour, memory and processor can all be altered for a little more cash. The Pro 6 comes with either an 8th-generation Intel Core i5 or i7 direct from Microsoft, with 8GB or 16GB of RAM allocated to each, respectively.

All the devices in this roundup can offer up to 1TB of internal flash storage, however, at the other end of the scale Apple’s offerings start out with just 64GB of space, while Microsoft’s Surface begins at 128GB.

Both company’s devices rock LCD panels, although Apple has used the same tricks it pulled on the iPhone XR (pixel masking and anti-aliasing) to give its latest iPad’s displays rounded corners, making both slates look decidedly more cutting-edge against the Surface. Apple’s various display technologies, such as ProMotion (a 120Hz refresh rate for super-smooth visuals), TrueTone (Apple tech which adjusts screen colour temperature based on surrounding ambient light) HDR playback support all up the visual fidelity of these iPads far beyond anything Microsoft’s machine can muster.

The iPads offer higher resolution front and rear cameras and ditch the physical home button of their predecessor, instead integrating Face ID as first introduced on last year’s iPhone X. The advanced face unlock technology at play has been reworked to function in any orientation and unlike the company’s phones, doesn’t sit within a notch this time around. Despite this, the iPads offer slimmer bezels than the Surface, whose Windows Hello-compatible face unlock authentication is much simpler and arguably less secure.

Software is where the Surface may well claw back credibility in this face off. Apple’s new iPads, like any of the company’s mobile devices, run on iOS (version 12.1) and as such rely on the App Store for their applications. You get a more refined experience from Apple’s operating system and the apps that run on it – all optimised for these tablet’s dimensions and specific hardware but compared to the versatility of full Windows as a platform found running on the Surface Pro 6, it’s hard to compete.

Microsoft’s Windows 10 still needs work when it comes to touch interaction but its infinitely more open as a platform and it more readily accommodates multitasking and other power-user functions.

2018 iPad Pro vs Surface Pro 6 – Which offers the best value for money?

The WiFi-only 11-inch iPad Pro starts at $799/£769, while the base 12.9-inch model starts at $999/£969. Microsoft’s Surface Pro 6 technically starts at $749, however, that price relates to a model that relies on a 7th-generation Intel Core m3 processor and that Microsoft doesn’t even advertise on its own website (not to mention it’ll likely feel underpowered, paired with just 4GB of RAM). For the base Core i5 Surface Pro 6 that Microsoft sells directly, expect to pay $899/£879.

The Microsoft Surface Pro 6 arrived in mid-October 2018, while the new 11 and 12.9-inch 2018 iPad Pros are available to pre-order from today and hit stores in markets including the US and UK from November 7.

Apple’s new iPad Pro sports a wholly different focus to the Microsoft Surface Pro 6, so does that make it better? Let us know by heading to the Trusted Reviews Facebook page reach out to us @TrustedReviews on Twitter.