Microsoft’s Surface Pro 6 is a light and portable 2-in-1 with a decent display that’s ideal for office work and streaming. I’m impressed by the lightness and nippiness of the Surface Pro 6.

What is the Microsoft Surface Pro 6?

Update: The Surface Pro 7 has since released, offering superior specs and USB-C inputs. Check this out when considering the Surface Pro 6.

The Surface Pro 6 is a 2-in-1 Microsoft device that can be turned into a makeshift laptop when paired with the sold separately Type Cover.

The Surface Pro 6 is longer the flagship device of the series though, with the newer Surface Pro 7 recently launched with a more powerful processor and improved connectivity options such as USB-C and WiFi 6. Microsoft have given the Pro 6 a huge price cut though, so it’s still very much a worthwhile buy at £699.

But what are you missing out on by going for the Surface Pro 6 instead of the more pricey Surface Pro 7? 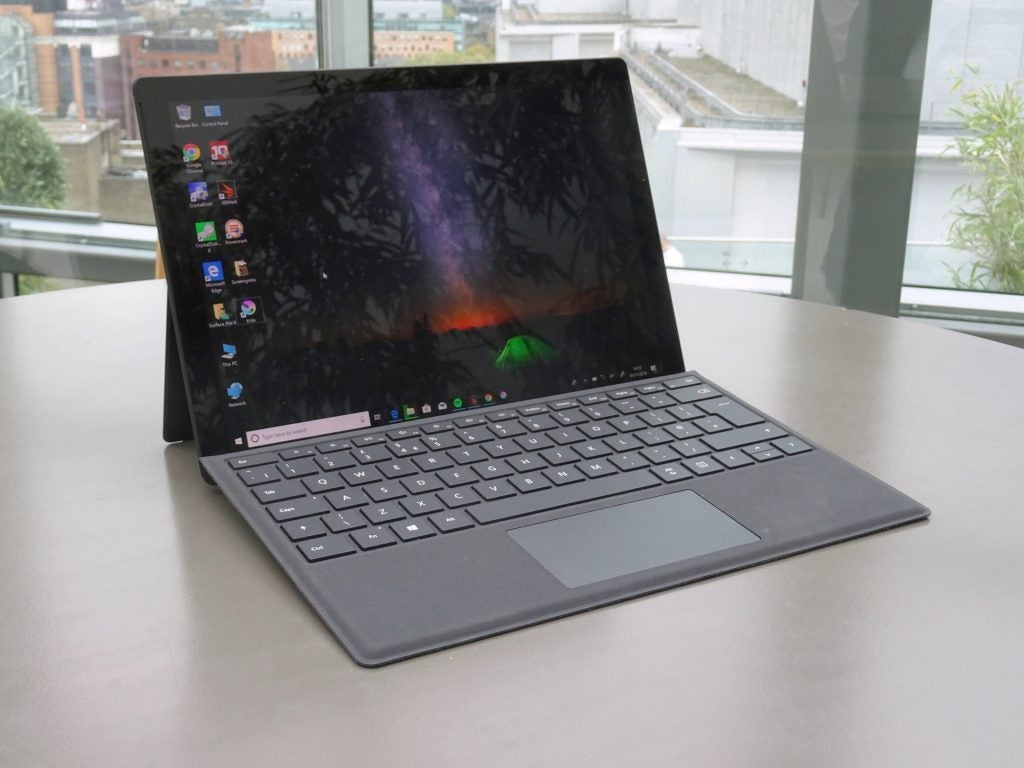 Like all of Microsoft’s 2-in-1 range laptop-tablet hybrids, the Surface Pro 6 comprises a Windows 10 tablet with a kickstand and a six-pin port, which lets you attach a TypeCover keyboard dock.

Even without the (separately sold) keyboard cover attached, the Surface Pro 6’s kickstand is wide and stable enough to ensure that if you have the tablet stood up on your desk and you’re using another Bluetooth keyboard, it’s not going to get knocked over easily, no matter how hard either of your pet cats try it.

The keyboard dock features magnetic strips that enable it to snap and lock into place snugly. The angle of the dock makes the whole thing rise up on your desktop, so that you’re not tied down to a flat surface, as you would with lesser keyboard docks.

There are no extra connections on the dock itself, which is a shame, seeing as it costs £150. In terms of other ports, you don’t get a huge amount on the Surface Pro 6. 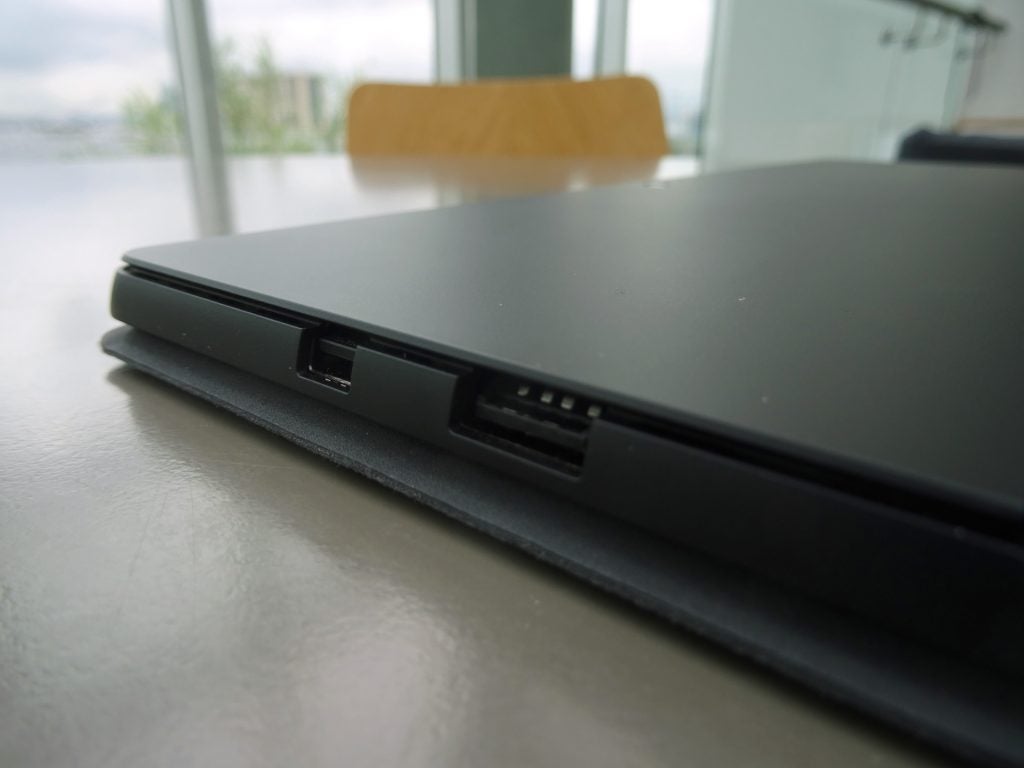 You don’t get many ports with the Surface Pro 6, but that’s normal for 2-in-1 hybrids like this

There’s a single USB-A 3.0 port, a mini DisplayPort port, and a microSD card reader along with the 3.5mm headphone jack and power supply connection. That’s more than what you get with most tablets (and some laptops, come to think of it), but anyone looking for a ‘pro’ device might expect to see an HDMI port or a USB-C port here. The Surface Pro 7 solves this issue by featuring a USB-C port, but it does cost a little bit more.

The Surface range is also generally synonymous with bright colours, or smooth, spaceship grey plastic. But, for the first time, Microsoft’s launching a new Surface in matte black. The Surface Pro 6 is available in either black or platinum, which is bad news if you’ve enjoyed Microsoft’s colourful styles on other devices. 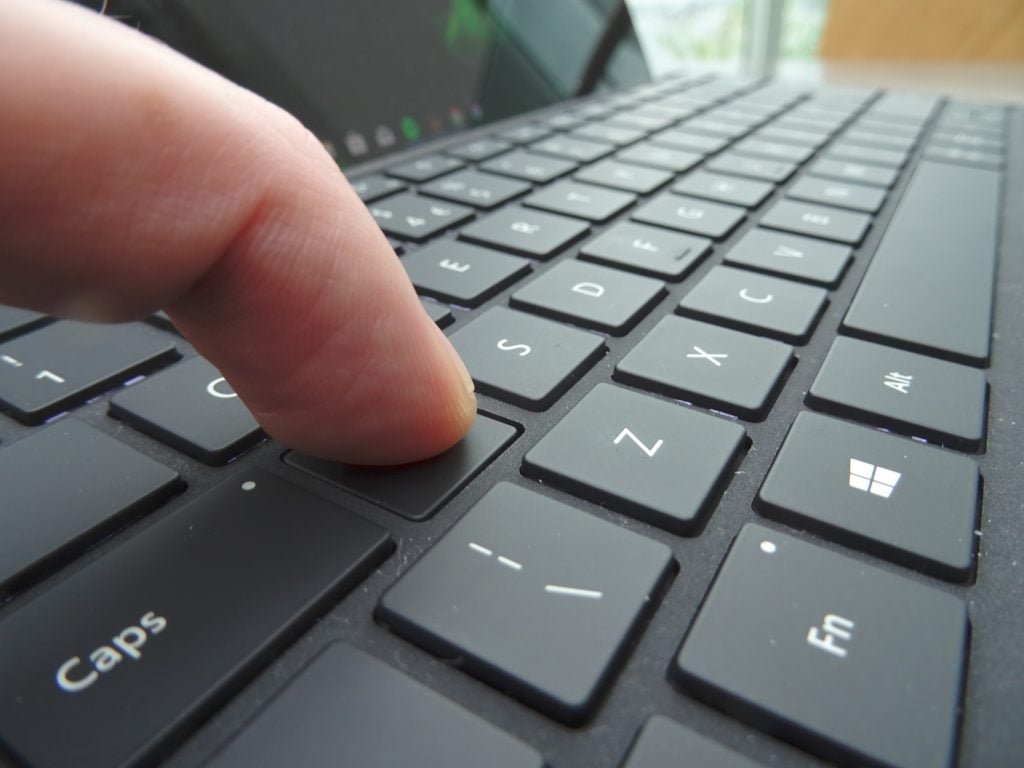 My left index finger doing a convincing impression of a brontosaurus. The Type Cover keyboard dock is pretty nice to type on, too

The Type Cover dock of the Surface Pro 6 measures 295 x 217 x 5mm and features a full QWERTY layout including function keys and a trackpad.

Generally the typing experience is pretty good, despite the cramped dimensions. Sensibly, Microsoft has given more acreage to the letter keys, making the function keys smaller. Downsides include the four arrow keys, which are bunched up at the bottom right corner, and the left-hand shift key, which is so small, I found myself ACCIDENTALLY HITTING CAPS LOCK ON MORE THAN ONE OCCASION.

The trackpad is very precise and responsive, allowing you to scroll through long articles with ease and get a quick overview of running processes with a three-fingered drag. There are no buttons next to the trackpad, but it supports both left and right clicks.

There was a little bit of flex at the bottom-right corner of the review sample we were sent, which is slightly worrying. Given that these things cost £150 a pop, I’d have hoped for a bit more resilience here. 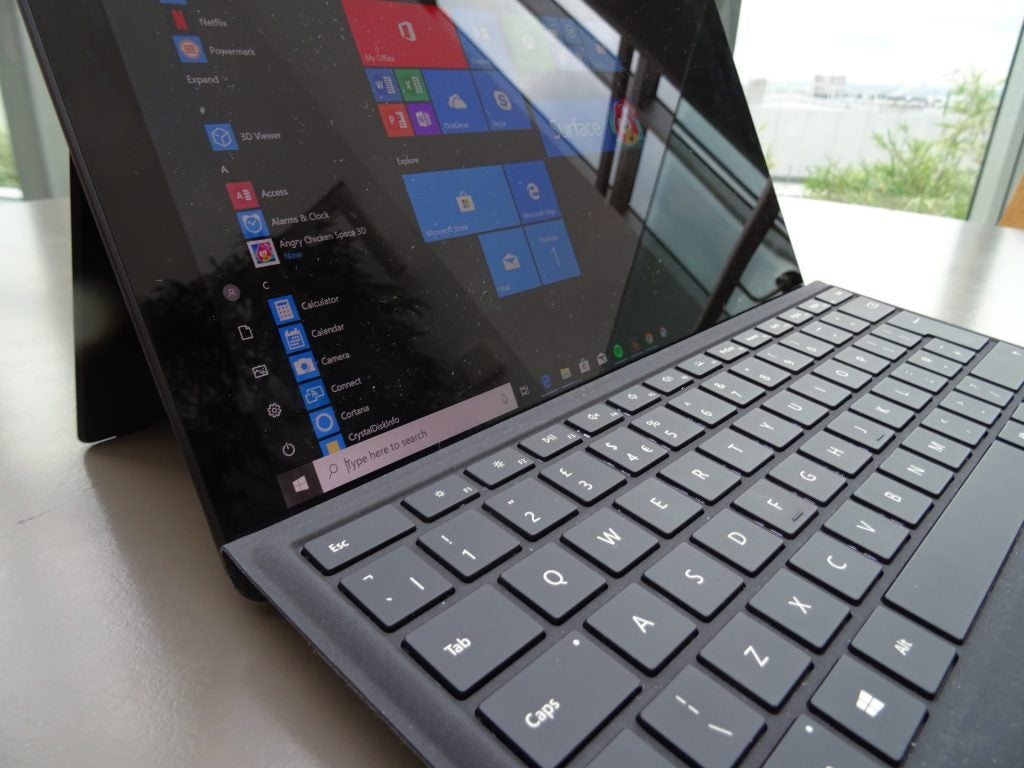 The Surface Pro 6’s screen is excellent, but a glass cover means that working outside or in an overly bright environment can be problematic

The display of the Surface Pro 6 measures 12.3 inches across and boasts a resolution of 2736 x 1824, which gives you 267 pixels per inch (ppi). The display conforms to an aspect ratio of 3:2, which is common for the Surface range, as well as Apple’s iPad Pro.

It’s a very good display. Streamed video and web pages look crisp and clear, with no colours looking overly washed out. Contrast is decent too, with dark areas of pictures not looking flat or grey – like they would on laptops with lesser screens.

The tempered glass cover has a tendency to reflect sunlight and harsh striplights, which hampers visibility. But that’s something you’ll encounter on any device with a glass display cover.

The figures backed up our real-life observations, too. In colorimeter tests, I recorded a maximum brightness of 422.74, which is very good, and a decent minimum of 0.3132 nits, resulting in a superb contrast ratio of 1350:1. We recorded a colour temperature of 6265K, slightly warm, but close enough to the 6500K ideal for reds to not look overly saturated.

In terms of colour gamut coverage, the Surface Pro 6 gave me 90.2% of the sRGB gamut, which will be good enough for digital art and cartooning.

Photographers will be disappointed by the paltry Adobe RGB and DCI P3 scores of 62.4% and 64.2%. But, frankly, you wouldn’t want to be using a device like the Surface Pro 6 for such work anyway. All this means in realistic terms is that any holiday snaps you take and then load on to the Surface Pro 6 won’t look as good as they would on other devices. 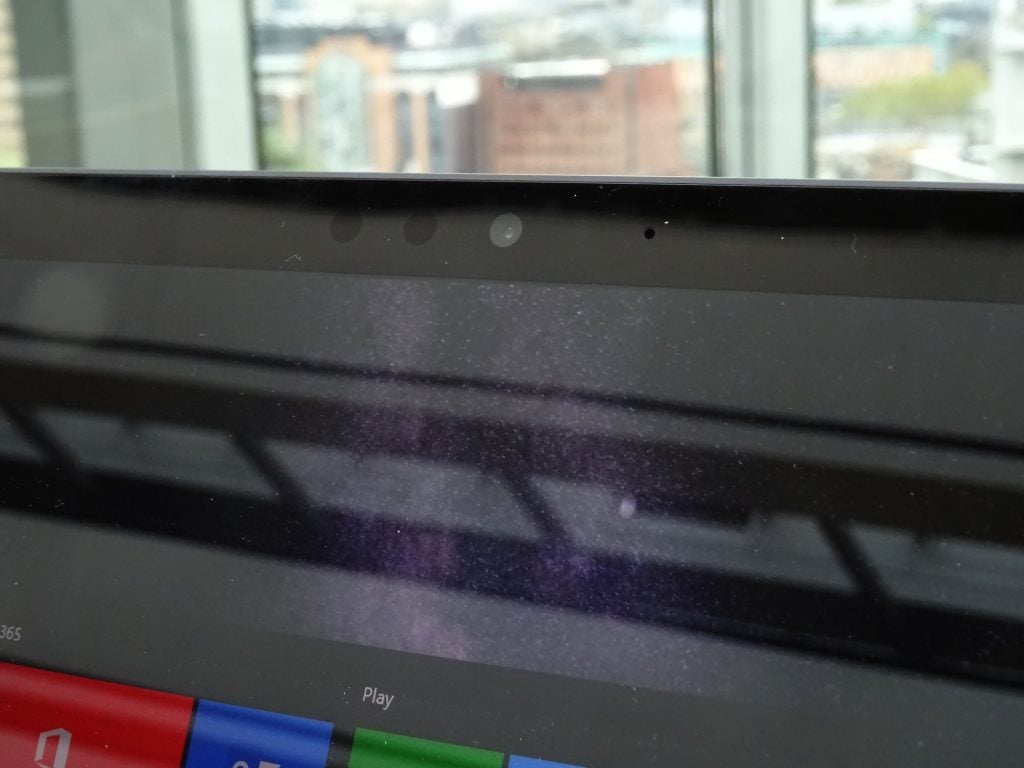 The Surface Pro 6’s camera supports full HD Skype calls and Windows Hello, so you can unlock the device with your face instead of a PIN or password

Specs for the Surface Pro 6 range differ slightly, depending on which of the two processor options you go for. Here’s how everything stacks up: 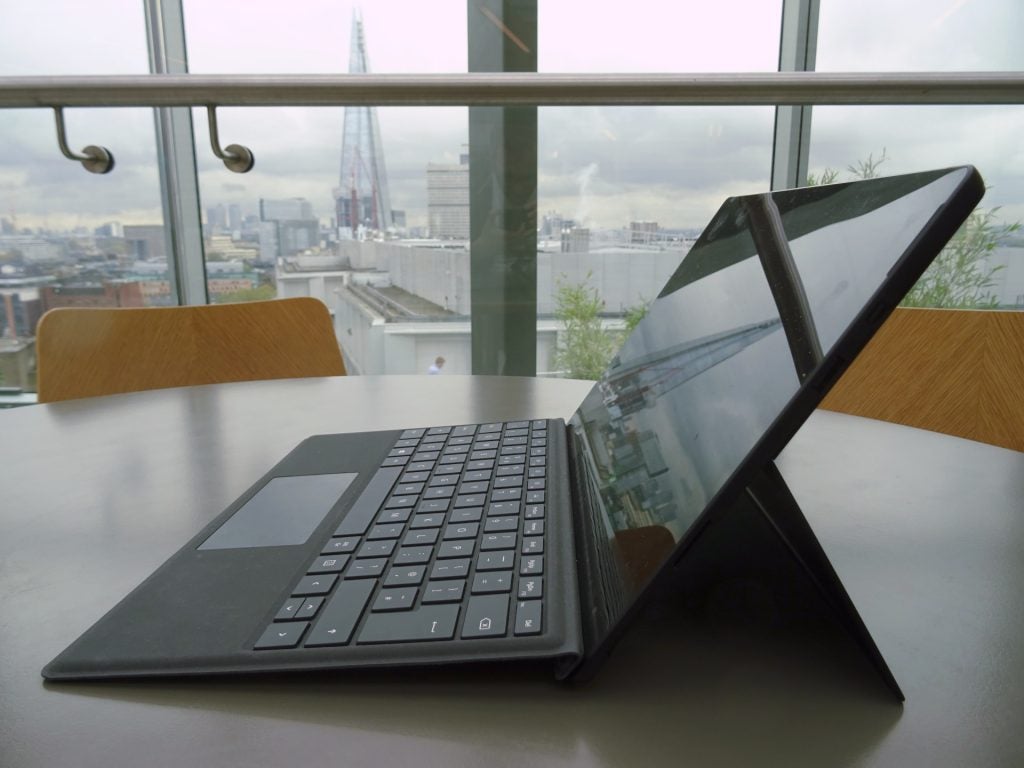 Despite a slight increase in weight, there’s no immediately noticeable difference between the Core i5 and i7 versions of the Surface Pro 6

Here’s a rundown of the range with pricing options:

Given that those laptops are powered by the exact same processor, the quad-core Intel Core i5-8250U, it’s not that surprising that both the Geekbench 4 single and multi-core results are pretty similar.

For more context, the scores the Surface Pro 6 recorded aren’t that far away from bigger and more powerful devices, such as the Lenovo Yoga 730 and the Dell XPS 15 2-in-1. So, on paper, the Surface Pro 6 punches above its weight.

The Surface Pro 6 is really geared towards work and streaming media between writing essays/reports/articles. And to that end, the bulk of my benchmarking focused on that.

If you’re after a hybrid laptop tablet that will let you hammer our essays and satisfy your Netflix/iPlayer/Amazon Prime binges on the sly, then the Surface Pro 6 does all of that with aplomb.

The Surface Pro 6 is well equipped to handle light gaming (such as Minecraft) as well, but isn’t really capable of playing the likes of Overwatch and PUBG.

To give you an idea of how the Surface Pro 6 might handle games, I ran the standard 3DMark Ice Storm test, which we use when testing laptops and 2-in-1s that don’t have a dedicated GPU. This gave us a fairly middling score of 50,847. I also ran the Ice Storm Extreme, which was used to test last year’s Surface Pro 5. We got 43,042, which, again, is a good – if average – result.

For completion’s sake, I also ran Cinebench R15 on the Surface Pro 6. Cinebench is a video and graphics benchmarking tool that generally gives you an idea of how well suited a laptop is to heavy gaming and video editing. While it’s unlikely that you’d want to run Adobe Premiere Pro on the Surface Pro 6, the scores at least give you an idea of graphical processing prowess.

On that note, here’s how I got on with drawing and making art with the Surface Pen. The Surface Pen features 4096 levels of pressure sensitivity and uses N-trig technology, instead of Wacom, which most styli use. This time around, Microsoft has installed everything you need to start using freeware drawing programmes, such as Krita, out of the box – no need for you to faff around hunting for custom drivers.

The stylus also works with Microsoft’s Sticky Notes, so if you like, you could jot down things and add them to your daily to-do list with the Surface Pen, as well as/instead of typing.

As with previous Surface Pros, the magnetised strip of the Surface Pen means it can be easily attached to the sides of the tablet. This is more useful for having somewhere to keep your stylus when you’re sat at your desk. The stylus is liable to fall off if you carry it around, so take it off and stash it in your bag when you need to move around. 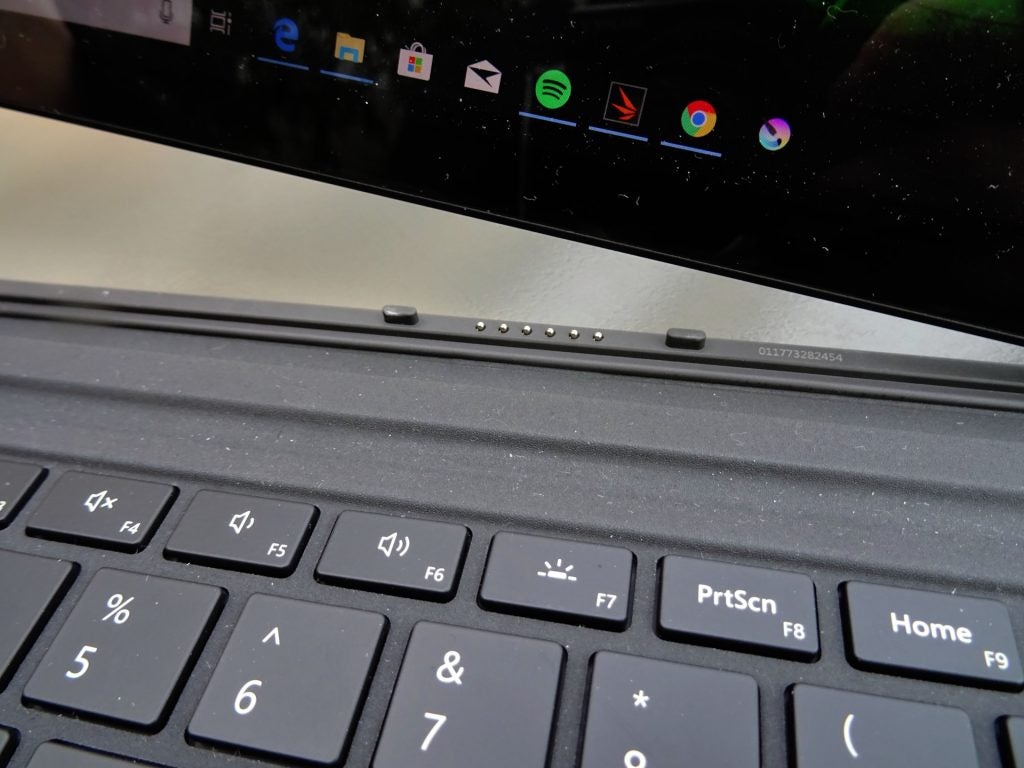 Using Powermark to simulate 10 minutes of browsing and five minutes of streaming video, we got a result of seven hours and 55 minutes, with the screen’s brightness set to 150 nits.

Typically, a day spent writing and streaming Spotify playlists to a Bluetooth speaker would give us around seven to eight hours of power, and we’d get about the same out of an average Netflix binge session, too. That’s about what we’d expect from a hybrid device of this kind. The Surface Pro 5 gave us approximately eight hours of use off the back of a single charge.

Microsoft quotes you 13 hours 30 minutes of looped video playback in the spec sheet, but in our experience, you’ll get an hour or so less than that. Like most tablets, once the battery falls beneath the 10% mark, battery-saving mode kicks in, but power still tends to fall off a cliff.

From an empty tank, we’d get around 60% full after an hour. Generally, it takes about two hours to completely charge a Surface Pro 6. 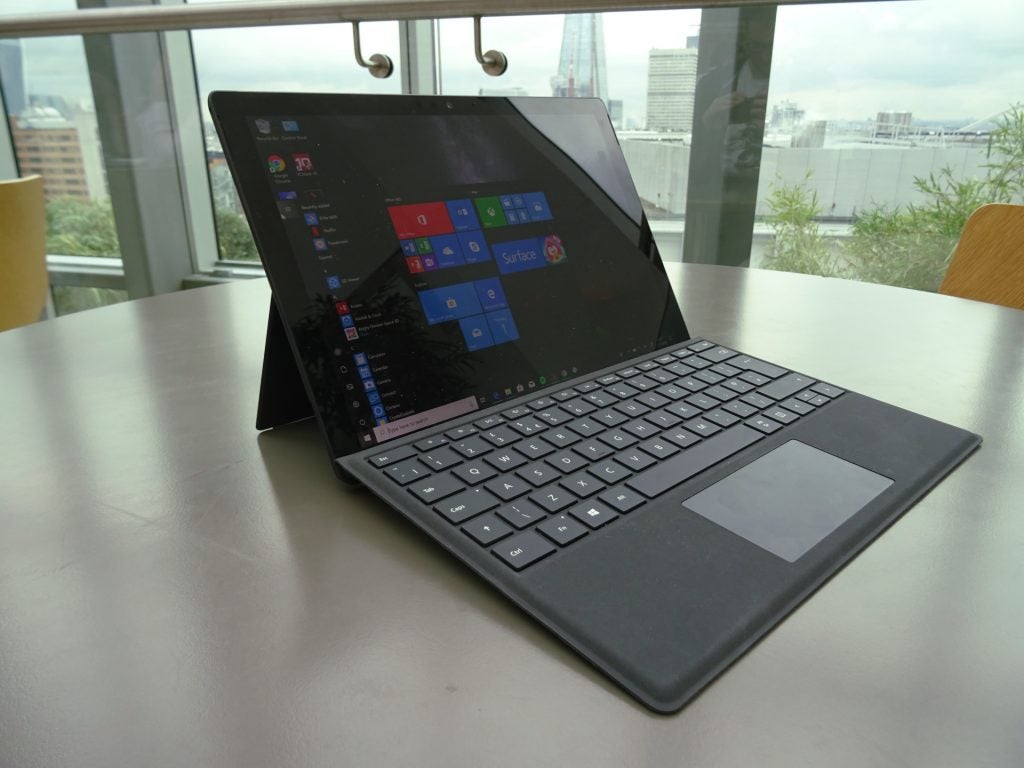 Neat-looking and light, the Surface Pro 6 is a smooth operator

Should I buy the Surface Pro 6?

The Surface Pro 6 is no longer the best in Microsoft’s 2-in-1 series following the Surface Pro 7 launch, but there are still plenty of reasons to buy it.

While it may not have the performance power of the Surface Pro 7, or connectivity options such as USB-C, it’s essentially an identical device in almost every other regard with a slightly lower price. The Surface Pro 6 is also bound to feature in all the Black Friday deals, seeing the price driven down even further.

So if you’re after laptop/tablet hybrid that can steamroll through basic tasks, then the Surface Pro 6 really is great option, even in 2019.

Microsoft’s Surface Pro 6 is a light and portable 2-in-1 with a decent display that’s ideal for work and streaming.