It’s the day of the Apple iPad launch event and tablet fans are eagerly awaiting the official unveiling of the iPad mini 2, the follow-up to the ridiculously successful iPad mini.

Despite Steve Jobs once saying the company “would not make one of those 7-inch tablets,” the iPad mini has been very popular among consumers.

Gartner reports found that 60% of iPad tablet sales in early 2013 were
iPad minis, showing that there is a definite appetite
for a cheaper and smaller form-factor iPad.

Tonight, Apple should launch the iPad mini 2 complete with a much awaited Retina display and potentially the Touch ID fingerprint scanner and new colour scheme of the iPhone 5S.

Regardless of the exact release date, the iPad mini 2 is sure to hit stores before Christmas to ensure the rush isn’t missed.

. Manufacturing issues and problems with stock has led to IHS iSuppli analyst Rhoda Alexander stating that “The Retina Mini looks less certain for that time. Manufacturing volumes on that would match better with a [first-quarter 2014] launch”.

If Apple can’t get a Retina (Retina is Apple’s way of saying that the pixels aren’t visible to the naked eye) display on the iPad mini 2 then they will have a problem. One of the main issues with the original iPad mini its low resolution screen. Yes it’s bright and perky but its falls way short of the competition, particularly the 1920 x 1200 screen on the new Nexus 7.

So there may be some issues with screen availability. The truth is that it’s hard to justify an iPad mini 2 that doesn’t come with higher resolution screen and it’s unthinkable that Apple would neglect to upgrade it, even if the stock shortages are initially terrible. There are still pre-orders to be had, although you’ll be very lucky to get one before Christmas.

Apple struggled to get enough stock of the iPhone 5S to consumers originally, with even release date order customers having to wait around a month before their new smartphone arrived on their doorsteps. This may well happen with a Retina display iPad mini 2.

The way Apple scales its displays (it doubles the pixel resolution every time to ensure app compatibility) means that the iPad mini 2 could share the same 2048 x 1536 pixel resolution as the iPad 4. There will be no change in the size of the display as Apple will stick with 7.9-inches for the iPad mini 2, meaning the device will pack a 324ppi image density, which is almost identical to the Nexus 7. A screen with that high a resolution will provide excellent image, text and video clarity and dispel some of the complaints levelled at the first version. 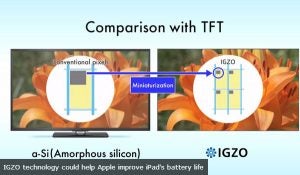 Unfortunately we’re unlikely to see Sharp’s IGZO panel technology in the iPad mini 2. There have been an increasing number of rumours suggesting Apple is looking at the solution for its range of iPads in the future, but it looks like this iteration may be too soon.

There are a number of benefits IGZO brings to the table which makes it interesting, not least of which is significant energy savings and the capacity for edge to edge flexible displays.

if Apple updates the iPad mini 2 with a Retina display.

All indications and leaks point to the iPad mini 2 sharing the same design, size and chassis as the original iPad mini. Boring you say? We don’t think so. The iPad mini is one of the most well-crafted tablets on the market and is light and slim enough that we can forgive it staying the same for a while. In fact Apple thinks so much of the design that it’s replicating it for the iPad 5. 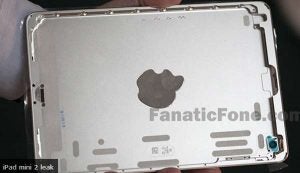 Case and chassis leaks suggest the size will offer exactly the same 200 x 134.7 x 7.2mm dimensions and it will weigh pretty much the same as the original at around 308g. That’s only 18g more than the Nexus 7, which has a smaller screen than its Apple rival.

While the dimensions and overall design will stay the same, the iPad mini 2 will likely come in some new colours. We’ve already glimpsed pictures of space grey and champagne gold iterations of the iPad mini 2, so it seems Apple is introducing the iPhone 5S colour scheme to the next 7.9-inch slate. 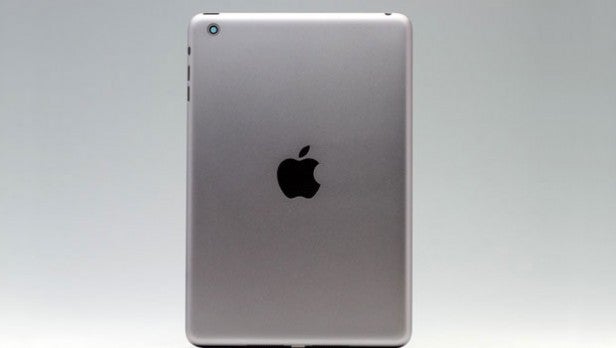 The only other likely iPad mini 2 design change is the introduction of the iPhone 5S Touch ID fingerprint scanner embedded into the home button of the device. This is discernible by a metallic ring around the outside and the lack of the traditional square icon on the home button.

If you’ve not heard of Touch ID it’s because it’s very new, Apple only introduced it with the iPhone 5S at the September 10 launch event.

It is a clever sensor that lets you unlock your tablet with the touch of a finger or thumb. It sounds like a gimmick until you use it and realise just how brilliantly it works. It’s quick, slick and secure. Of course there’s no point to it if you don’t lock your iPad.

One thing that we think is missing from iOS 7 is the ability to create multiple user profiles. We could then assign access to children with restricted privileges so they can’t access inappropriate material or delete a load of your emails accidentally.

The current iPad mini is a little on the weak side. Along with the resolution it also shares the same A5 1GHz dual-core SoC (system on chip) processor and 512MB RAM as the iPad 2.

It will undoubtedly get an upgrade, but how much of one? If Apple continues the trend, the iPad mini 2 could have the dual-core 1.4GHz CPU and quad-core GPU SoC to match the iPad 4.

However, the Touch ID ring suggests that the iPad mini 2 will actually be powered by the same processor as the iPad 5 – a turbo-charged 64-bit A7 CPU, likely to be named the A7X.

The Touch ID sensor requires 64-bit processing to work quickly and effectively so we can be quite confident that if the iPad mini 2 has Touch ID it will have the A7X, and it’s likely to be a powerhouse.

The A7 on the iPhone 5S was significantly more powerful than we anticipated, which bodes well for the A7X. 3D gaming, even graphically intensive titles like Infinity Blade 3 and Real Racing 3, should run perfectly.

Apple tends to shy away from price hikes for new iterations of its phones and tablets. Does this mean the iPad mini 2 will retain the £269 price point of the original? It’s hard to believe there won’t be a small hike as, if as expected, it packs a new CPU and high-resolution screen. It will essentially be an iPad 5 with a smaller screen and that will probably retail at £300 for the 16GB version.

iOS 7 has had a mixed reception. We think it’s a big step forward for Apple and do not have the reservations some have about the design looking like a child’s toy. It’s clean, crisp and clear. 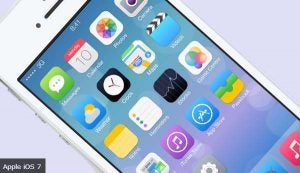 It comes with a new notification bar similar to the one Android users have benefited from for years and a slicker way to multitask and kill apps.

Apple will also be bundling Keynote, Pages, Numbers, iPhoto and iMovie with every iPad mini 2. With a decent keyboard cover this could make it a nifty laptop replacement. There’s also rumours Apple will soon be offering GarageBand as a free download with all new iPad mini 2 tablets. The iWork and iLife apps are due to get an upgrade too.

We don’t like to judge people here at TrustedReviews, even the ones that like taking pictures with their tablets. The iPad mini came with a 5MP camera that does a surprisingly good job at taking pics. It’s also a fair bit smaller than the iPad 4, making you look less of a plonker when you do.

Performance should be solid, particularly in low light where Apple seems to have a knack of getting the most out of its cameras.

If, as expected, the iPad mini 2 has a Retina screen it will need more juice to power it. As the size of the tablet will remain the same, Apple will struggle to make too much of an increase in battery size, which was the issue with the iPhone 5S. The new CPU could provide some efficiency improvements, but it may not be enough to counter the hungrier screen.

Just like the new Nexus 7, we may find that the iPad mini 2 lasts slightly less than the model it replaces. On the plus side the iPad mini does have strong battery life so a small dip should not cause too much bother. We’ll have to wait to review and compare it to be sure.

iPad mini 2: Should I upgrade?

So you’ve got an iPad mini should you get the iPad mini 2? It’s a tricky decision. The display and processor of the iPad mini are weak, but if you’ve not noticed that the screen isn’t pin sharp you may well be happy with the iPad mini for a little while longer.

Performance is also a tricky one. If you don’t particularly multitask or use heavy apps or CPU hungry 3D games you may not notice a difference at all.

With announcement mere hours away you’d be a bit bonkers to go out and buy a current generation iPad mini now. Hold on tight for a bit and wait and see what Apple announces at the October 22 launch. Alternatively check out our guide of the best Android tablets.