iOS 7 is the first version of Apple’s mobile operating system to get a major redesign since the launch of the original iPhone.

Unveiled during the WWDC 2013 presentation, it is the result of the hard work of Apple’s Senior Vice President of Industrial Design, Sir Jonathan “Jony” Ive.

Apple has been under criticism of late that its mobile OS is tired and outdated, so iOS 7 should be the refresh the company needs.

iOS 7 release date set for September 18
Apple has confirmed that iOS 7 will roll out on September 18, two days before the iPhone 5S and iPhone 5C are available to buy in stores.

The pastel themed mobile OS will be available to download next Wednesday, September 18. Apple announced the iOS 7 download release date during the iPhone 5S and iPhone 5C launch on September 10, highlighting the new features it will offer Apple mobile device users. 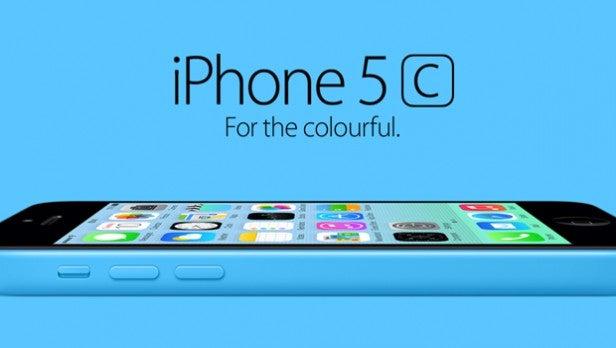 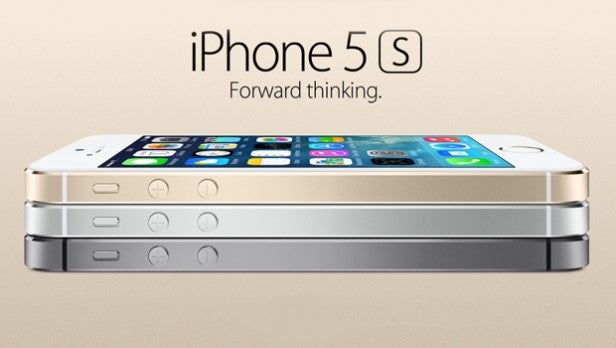 Apple confirms game controller plans for iOS 7
Get your thumbs ready for iOS 7 gaming as Apple has confirmed it is working with Logitech and Moga to launch official game controllers for its latest mobile OS.

There are two iOS 7 controllers on the way. The first is called the “form-fitting extended gamepad” that wraps around an iPhone or iPod touch but still offers the usual D-Pad, shoulder buttons, console game pad buttons and dual analogue sticks.

The second is called the “standalone extended gamepad” that isn’t connected to the device physically, but by Bluetooth. Potentially more important for iPad iOS 7 gaming, it will feature the same button array as the wrap around controller but formatted in the same way as a traditional Xbox 360 or PS3 controller.

Both controller options feature a pause button for quick access to the start menu of iOS games as well as pressure-sensitive, analogue sticks without a dead zone, non-drifting D-pads and fast button response times say Apple. 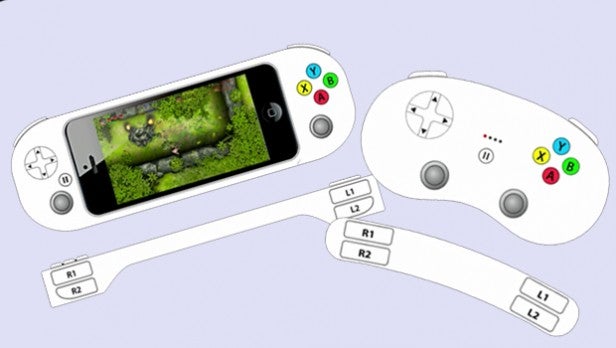 iOS 7 was officially unveiled at WWDC 2013 as the “most significant iOS update since the original iPhone” complete with a complete refresh of the existing iOS appearance.

“iOS 7 is the most significant iOS update since the original iPhone,” said Craig Federighi, Apple’s senior vice president of Software Engineering in launching the software. “To create it, we brought together a team with a broad range of expertise from design to engineering. With what we’ve been able to achieve together, we see iOS 7 as an exciting new beginning.”

Aiming to create a flatter more refined experience, Apple has introduced a whole new pastel colour scheme with a focus on multitasking.

“We wanted to take an experience that people know very well and add to it,” Apple said in announcing the new iOS 7 software. “To create it, we brought together a broad range of expertise.”

Apple used WWDC 2013 to highlight the dramatic changes brought with iOS 7, adding that “even the simple act of changing your wallpaper has a very noticeable effect on how your iPhone looks and feels across the entire system.”

Of course, the new iOS 7 isn’t all about aesthetics, it also brings with it a whole bunch of new features that aims to make the whole Apple mobile experience more streamlined.

“We have always thought of design as being so much more than the way something looks. It’s the whole thing, the way something works on so many different levels,” added Jony Ive. “Ultimately, of course, design defines so much of our experience. I think there is a profound and enduring beauty in simplicity, in clarity, in efficiency… True simplicity is derived from so much more than just the absence of clutter and ornamentation. It’s about bringing order to complexity. iOS 7 is a clear representation of these goals.” 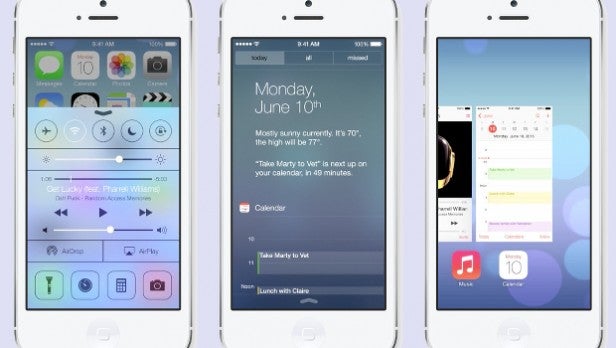 Apple has displayed a huge banner outside the Moscone Centre where it is holding its annual WWDC conference with a rather large number 7 on it, practically yelling out an upcoming iOS 7 reveal in the next few days.

The next iOS iteration has practically been a confirmed guest to the WWDC 2013 party for some time now, but it’s always reassuring to see such a massive hint given by Apple itself. The Cupertino company will be unveiling iOS 7 during its keynote on Monday, but has yet to reveal any hints as to what the next mobile OS will look like.

From the rather simplistic banner though, we could assume that Apple will be following the heavily rumoured flatter redesign. Of course, there’s only so much you can presume about iOS 7 from a banner with the number 7 on it, but we’re excited nonetheless. 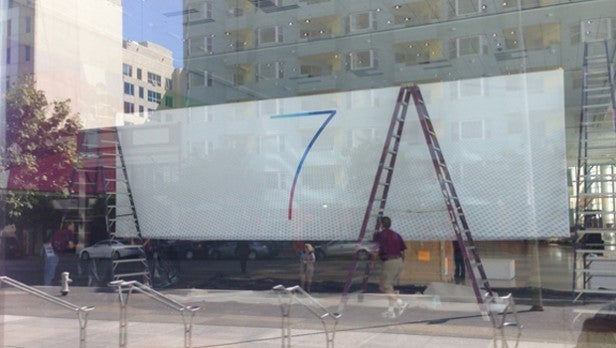 Along with the visible aesthetic changes, iOS 7 introduces a new focus on usability and multitasking features.

Apple
has followed in the footsteps of rival Google and its Android mobile OS
by installing a new Control Centre, accessible by simply swiping up
from any screen, including the Lock Screen. Here you can quickly access
functions like Wi-Fi, Bluetooth, music controls, connect to AirPlay
devices and other features like the camera, torch or calculator.

The Notifications Centre has also received an upgrade with a new Today feature and weather and traffic updates to boot.

With
the iOS 7 camera app, Apple has repositioned access to the shooting
formats and introduced its own Instagram-style filters. Combined with
this is the updates made to the Photos app. You can choose to view
photos by Collections, Moments or Years. You can also share your photo
streams with other people now too.

Airdrop has been added to iOS
7 and Safari has been stripped back so that only the web content is
shown until you need to make a change.

Siri’s got a whole new
interface too, fading into view in a translucent screen that appears on
top of any current content. Apple claims its faster at answering
questions and will even check more sources to find answers.

According to one developer testing the iOS 7 beta currently available, Siri will even take time to learn your name. Apple’s personal assistant will supposedly take the time to learn its owners’ name, even working on a correct pronunciation.

Far bar the biggest focus of iOS 7 is the addition of true multitasking. A double click on the home button of your device will bring up a preview of all currently running apps. To close the apps, all you have to do is swipe up on the preview window, which sounds rather similar to Android to us.

Apple has also made apps smarter by launching apps that you use at certain times automatically. It’s not quite clear yet how this feature will function but we’ll keep you posted.

Apps will also download and update in your off-peak usage times, like at night when your iOS 7 device is connected to Wi-Fi, meaning you can retain your battery power.

For more information, read our pick of the best new iOS 7 features. 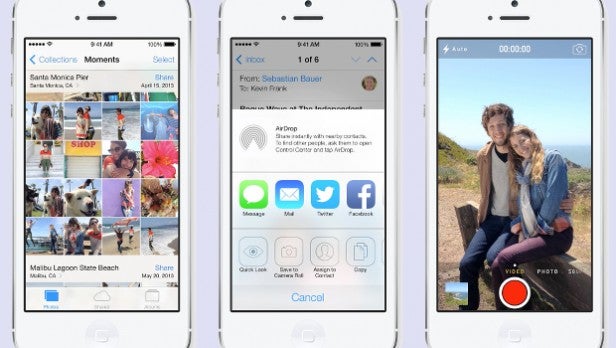 Apple has confirmed iOS 7 will be available on September 18, two days before the iPhone 5S and iPhone 5C release date.

A range of devices will be able to download the new Apple mobile OS, including the iPhone 5, iPhone 4S and iPhone 4. Unfortunately, any iPhone models before the 4 won’t make the iOS 7 cut.

On the tablet side of things, the 7.9-inch iPad mini and full-sized iPad 2, iPad 3 and iPad 4 will all benefit from the multitasking capabilities of the new OS.

Also, Apple confirmed that the 5th generation iPod Touch will also be joining the iOS 7 club. 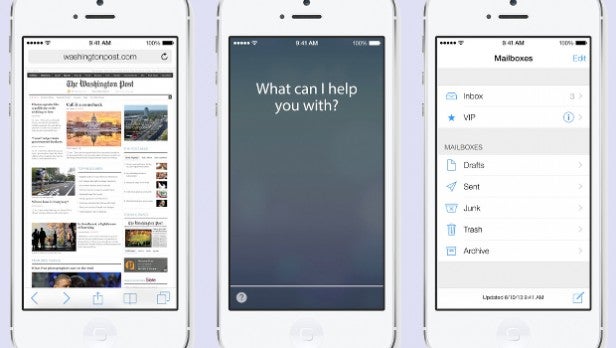 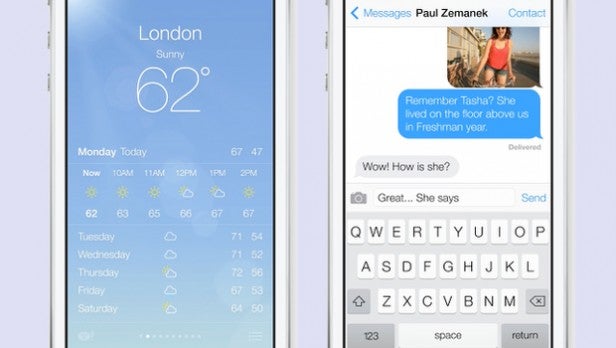 Next, read our iPad mini tips and tricks.