After years of mystery surrounding the debut project from Kojima Productions we now, finally, have an idea of how Death Stranding will play.

It seems the creator of Metal Gear Solid noticed that some fans were genuinely confused about what Norman Reedus and the Funky Fetus is all about from a gameplay perspective and chose to break the silence and finally talk about its world, characters and mechanics in some serious depth. Here’s seven things we learned from the recent 50 minute gameplay demo. 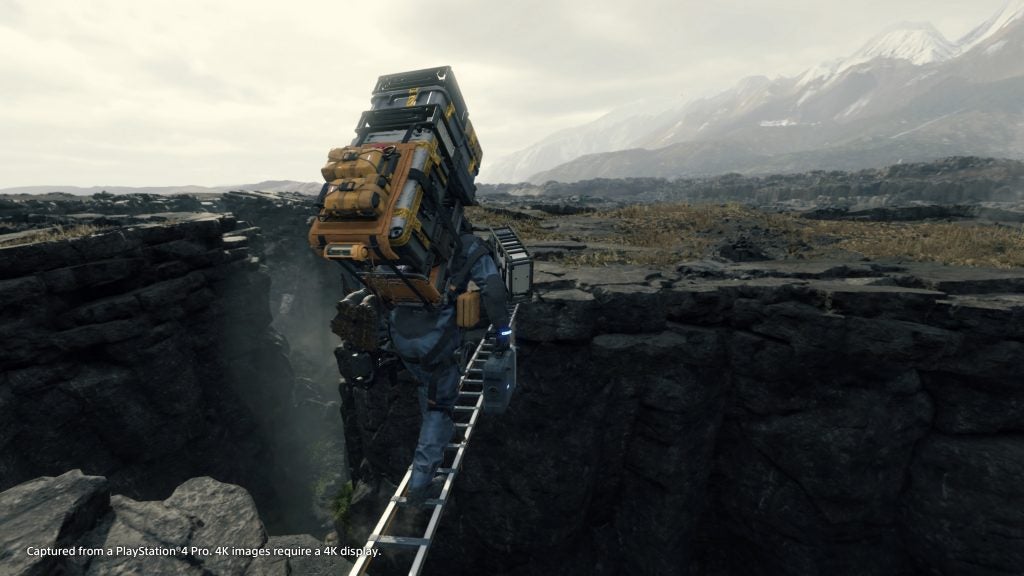 7. The world is absolutely massive

Following the success of Metal Gear Solid 5: The Phantom Pain, it was clear that Hideo Kojima and company had some serious talent working to create a world filled with fascinating things to uncover. Death Stranding is no different in that department, presenting the player with endless possibilities across its post-apocalyptic setting. And now, we’ve finally had a decent look at it.

The beginning of this demo features Norman Reedus in a homebase of sorts, preparing all his equipment before returning to the surface. From here, he sets an objective and paints a marker on the in-game map, presented with oodles of stylish graphics that are trademark Kojima. From here, you’re free to go wherever you like in the world, although beware of the horrors that might await you.

Like many open-world experiences, you can head straight to your objective or simply explore at your leisure, gathering resources and fighting off enemies at your leisure. From what we’ve seen there’s a definite air of Breath of the Wild in Death Stranding, and that’s certainly not a bad thing.

6. You can give Norman Reedus a bath, because of course you can

Delivering packages across a dilapidated hellscape is dirty business, so Sam Bridges will have to stop and wash away his worries every once in a while. This activity is done dynamically across the open-world as you come across muddy puddles or more splendorous hot springs. Given that it’s Hideo Kojima, we were expecting something a little more explicit as Reedus strips down before us. Sadly, that isn’t the case.

After unloading several kilograms of luggage and packages, a mechanic we’ll delve into a little later, there’s a cheeky fade to black and Sam slips into some gnarly looking liquid. He even takes the baby along with him, as bathing seems like a way of recharging your stamina and other attributes before continuing on your treacherous journey. 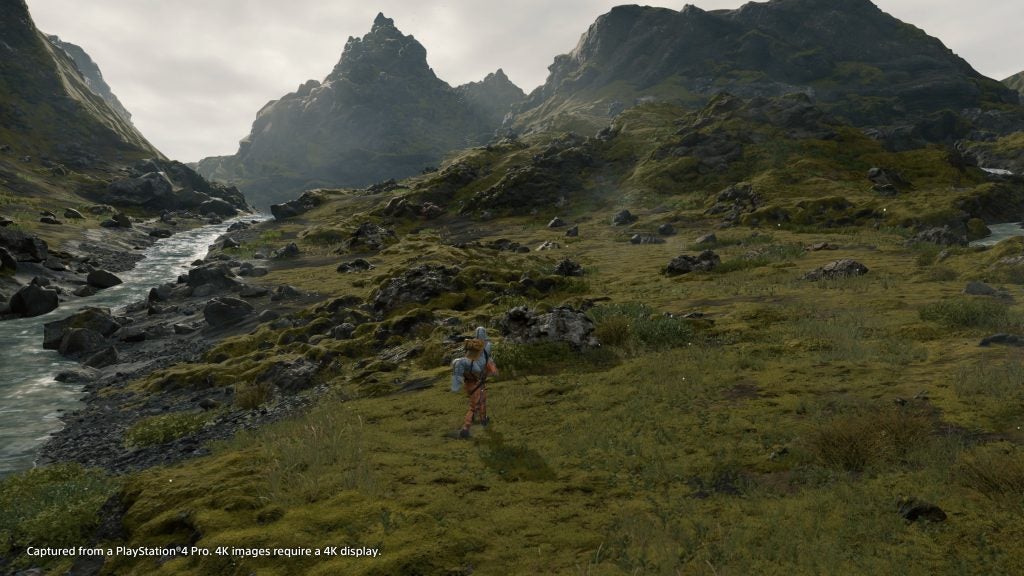 When it was first announced, Kojima Productions stressed that Death Stranding will be a connective experience, with players communicating in ways that hadn’t been seen in the gaming medium before. While that initial claim isn’t entirely true, there are certainly dozens of ways to make your presence known in the world of Death Stranding.

It seems that when exploring you can mark points of interest with an array of signs, alerting new players of potential threats, treasures and other such things from a distance. Upon scanning the world, you’ll gain access to a bunch of markers that could encourage venturing in a certain direction, either to endless treasures or certain doom if you’re willing to trust what you’re being told.

Impacts on the environment or objects left behind in the world by other players can also be represented on your game depending on the instance. Much like Dark Souls, people reacting positively or negatively to things you leave behind in the world will be displayed in real-time on the screen, which I imagine will lead to a wildfire of constant notifications at launch. 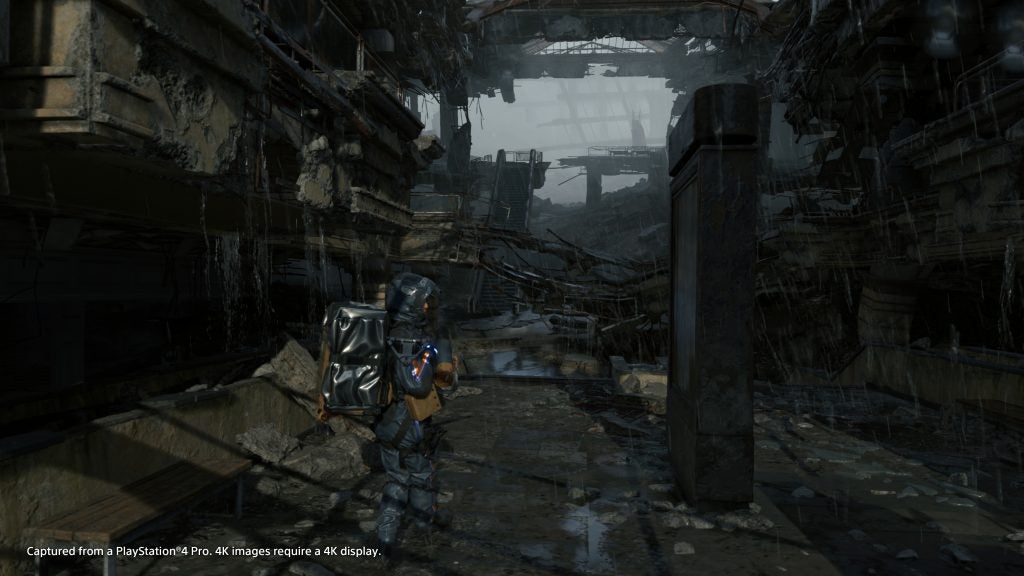 4. There’s plenty of vehicles to ride about in

Considering how large the world of Death Stranding is claiming to be, waltzing about the entire thing with nothing but your own two feet sounds like a bit of a chore. That is, unless you’re truly dedicated to a supernatural hiking simulator. Whatever floats your boat and all that.

But when you’re not stomping up daunting hills and down luscious greens, there’s plentiful modes of transportation. The demo showcases a number of vehicles, the first being a futuristic motorcycle.

Others include larger trucks occupied by enemies and a hoverboard which can save your bacon when navigating rock-filled trenches on the side of mountains. It’s clear that the landmasses that make up Death Stranding are incredibly varied, and you’ll need an arsenal of navigable tools to conquer them. 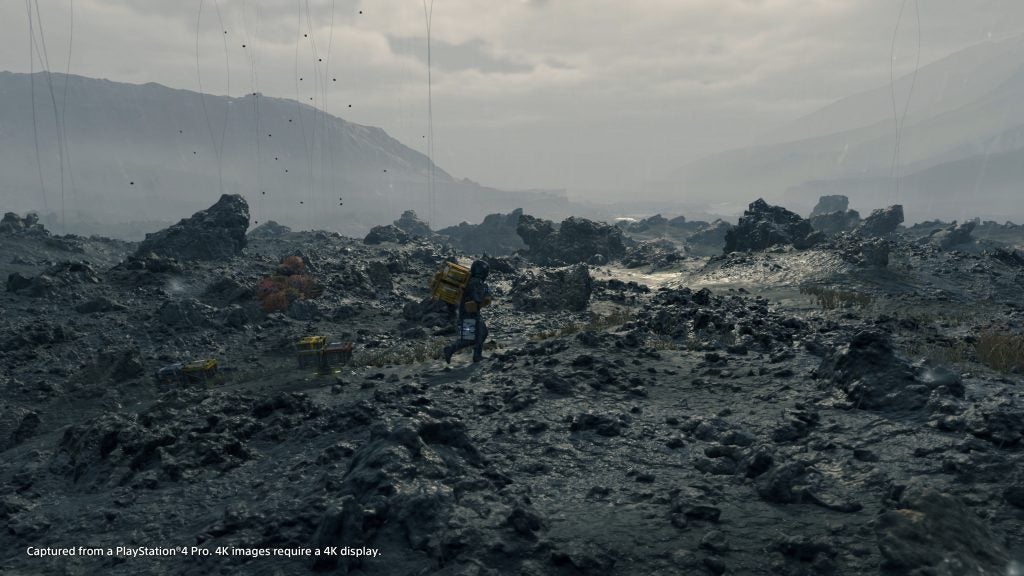 From a mechanical perspective, Hideo Kojima has never made a bad game. This is especially true with the Metal Gear Solid series he is most known for. Each new entry has pushed the envelope in some manner, whether it be through nuanced stealth systems or complete narrative absurdity. You’d constantly be stumbling across surprises that subverted expectations in the most wonderful ways.

A similar vibe permeates the entirety of Death Stranding. One part of the demo has Sam Bridges stumbling upon a research facility on the horizon, populated with unusual agents, valuable resources and perhaps some tidbits of lore. After its spotted, he hops aboard a skateboard of sorts and slides on down. The sequence of stealth, discovery and eventual combat that defined so many moments in MGS5 is here in spades, and we love it.

Obviously, there’s a few new ideas crammed in too. Early on in this infiltration he stumbles upon a postbox which can be stuffed with materials or vice-versa. How exactly this will play into the full experience remains unknown. Perhaps you’ll need to sneak into bases to access posting apparatus without being noticed, otherwise risk failing the mission entirely. If scenarios offer an approach similar to the freeform nature of Metal Gear Solid we’re in for an absolute feature.

In terms of weapons, Death Stranding is leaning into the futuristic dystopia the rest of its world depicts. Your stealth weapon of choice is a strange piece of rope known as ‘The Strand’ which can silently eliminate foes from behind. You’ve also got the Bola Gun, which appears to wrap electronic ropes around baddies to incapacitate them. I’m sensing a theme of ropes and binding going on. 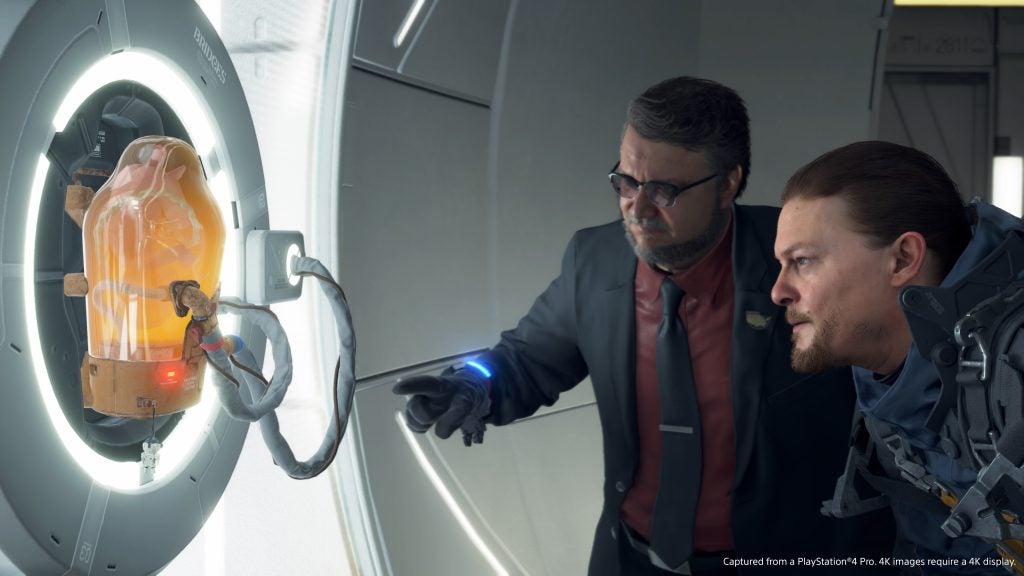 As for hand-to-hand combat, it adopts the same mixture of fast jabs and lethal takedowns Metal Gear’s CQC system boasted for years. It even has the same slow-motion motif when drawing weapons or hurling other trinkets at enemies to distract them.

2. The ladders are horrendously long

After walking through hills, fighting off yellow-suited weirdos and gathering resources, our hero finds himself in the confines of a destroyed city. Stuck in a torrential downfall, it quickly becomes clear that Sam Bridges isn’t alone. Ethereal corpses begin floating in the air, clearly connecting to some ghastly corded creature binding them to this realm. Using the same firearm we mentioned earlier, he either appears to capture them or vanquish them from reality entirely. It’s a twisted concept, and probably needs a better explanation than the demo gives.

Despite the Japanese commentary, it gives off a palpable sense of atmosphere. The air is thick with dread as the player must deal with constantly evolving threats emerging, whether it be spooky ghosts or hulking black tar monsters that will do anything to tear you apart. Resembling a hostile giraffe of sorts, it relentlessly pursues the player through bodies of water, even knocking down buildings you scale before managing to find a moment of respite.

Things are looking bad until the player pulls out ‘Hematic Grenades’ which, once thrown at the creature seem to expose the red flesh beneath its black exterior. After a few carefully placed throws and liberal of use dynamic cover, you emerge victorious. It’s a tense, long encounter which requires keen intuition to make it out unscathed. And, much like the stealth encounters we covered before, provide you with endless avenues to succeed if you’re willing to be creative.