Final Fantasy 7 Remake is one of the finest JRPGs in recent memory, setting a new benchmark for visuals and real-time combat in the series while managing to begin retelling one of gaming’s greatest tales in grandiose fashion. It’s just a crying shame we have to twiddle our thumbs and wait for the next chapter.

I’ll level with you now – the original Final Fantasy 7 shaped my taste in fiction. It was the first big game I played as a child, enrapturing me in its dystopian cyberpunk world and misfit cast of characters. It was a similar revelation for countless others, ushering in a new era of JRPGs outside of Japan that can still be felt today. Cloud and his gargantuan sword were instantly iconic, instilling a legacy many were afraid to touch for years.

Square Enix drew from the well with spin-offs like Crisis Core and Advent Children, but the idea of recreating the original felt almost sacrilegious. It was a task that appeared too ambitious, and if colour appeared outside the lines even once, fans would riot in their millions. I felt the same, but deep down pined for a modern interpretation of the classic. Now, it’s finally here – well, the first instalment at least.

Final Fantasy 7 Remake is both a brave departure from the original and a faithful retelling that remembers everything that made it so special all those years ago. The characters, location and atmosphere all feel eerily familiar, like they were plucked from my childhood imagination and thrown onto a modern console.

Supreme care has been taken to ensure Cloud and company’s reimagined adventure is worthy of the identity it inhabits, even if a few small fumbles are made along the way. These aside, this is one of the best Final Fantasy games in years, carving a fascinating future not only for the remake’s future chapters but the franchise as a whole. 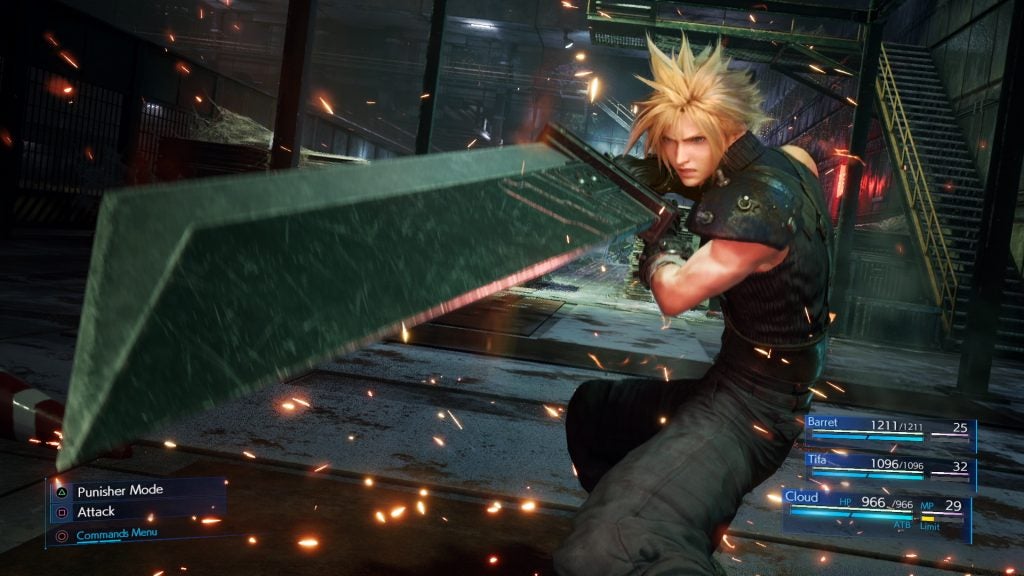 Final Fantasy 7 Remake follows Cloud Strife, a mercenary who finds himself working for eco-terrorist group Avalanche as they seek to destroy a reactor owned by the Shinra Power Company. This tyrannical corporation rules over the region of Midgar with an iron fist, using its industrial facilities to drain the planet of a precious resource known as Mako Energy. It’s slowly but surely killing our home, interested in profit margins and power above anything else.

It’s your job to bring them down, as you uncover their true intentions and come to terms with your own throughout the 30-hour adventure. There’s also Sephiroth to deal with – the beloved villain plays a far more significant role this time around, appearing at pivotal moments where he was never present in the 1997 original.

Square Enix has taken many unexpected liberties with the narrative, expanding upon existing moments and even adding entirely new sections to flesh out existing characters. The majority of these are beautifully done, shining a greater light on the motivations of supporting personalities and giving the moral politics of this world a far more nuanced definition than before. It’s no longer black and white, with Avalanche and Shinra having to deal with the consequences of their decisions.

However, not all of them land, with some additional parts in the later acts feeling like unnecessary fluff preventing you from reaching the climax, but others are revelatory. One chapter follows Jessie as you venture to her parent’s house in the upper-class estates. You learn about her family life, and what drew her away from a career in the arts to fight for the planet’s wellbeing. It’s emotionally resonant, allowing her to shine where she didn’t before. 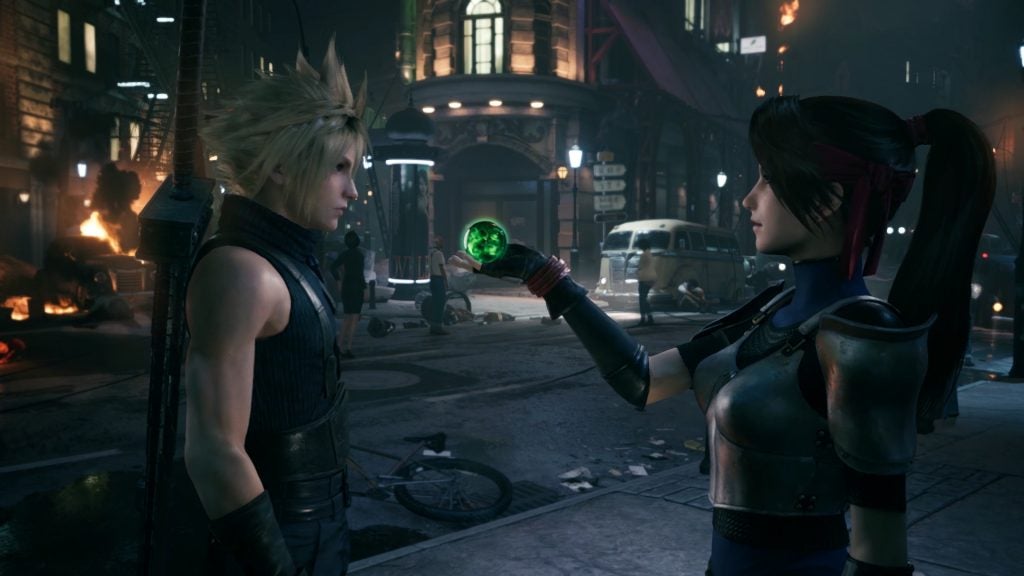 Final Fantasy 7 Remake is filled with wonderful character moments like this, using the original as a foundation and building upon it with creative brilliance. The friendships that bloom between the main cast – Cloud, Barret, Tifa and Aerith – feel genuine and heartfelt as they grow to trust one another in the face of impossible odds. There’s enough humour, romance and drama to carry you through to the conclusion and wanting more, especially with some of the lingering questions left once the credits roll.

This is far more than a traditional remake, with Square Enix seemingly keen to create a different interpretation of the story rather than recreate it with utmost accuracy. It maintains the spirit but isn’t afraid to pull you in some truly shocking directions. I predict this game is going to leave a polarising trail in its wake – and for good reason – but can’t help but admire what has been accomplished here. That, and not knowing what’s yet to come, makes a hardcore fan like me all the more excited.

But it isn’t all about narrative, despite it sitting at the crux of Final Fantasy 7 Remake. Its battle system takes the fast pace of Kingdom Hearts 3  and amps up the difficulty while implementing a fair amount of strategy. You run around the field as one of three characters in your party, attacking with a single button while pausing time to perform spells and abilities. This small lapse, in reality, provides you with valuable windows to formulate a plan, determining the weaknesses of enemies or who might need healing. It possesses a wonderfully satisfying cadence that never lets up. 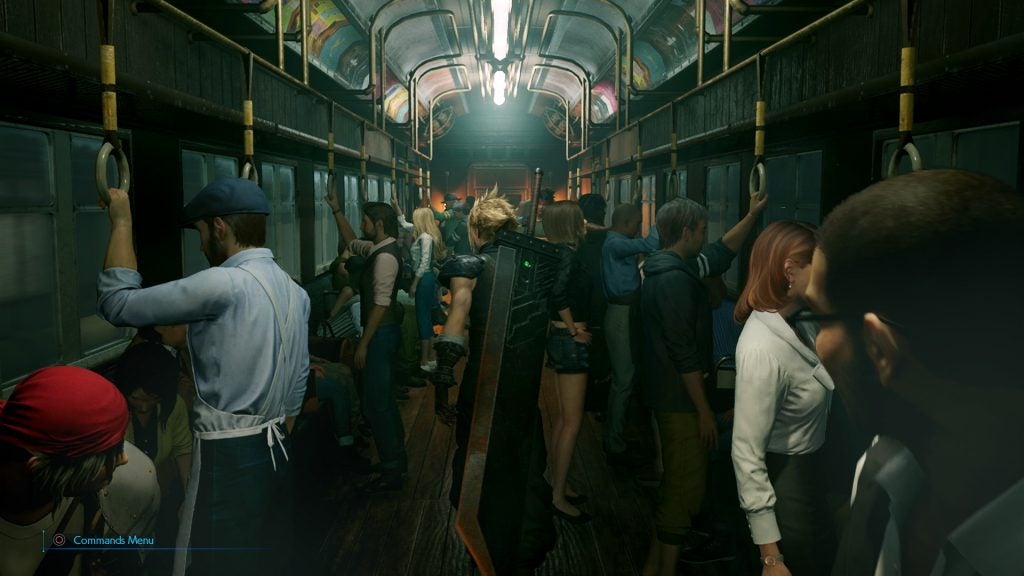 The key to victory in battle is determining your opponent’s weakness and staggering them, leaving them open to an avalanche of attacks they’re unable to defend themselves from. Boss battles become intense confrontations where you strive to stay alive while completing a rhythmic set of actions that leave them open to attacks for minute windows of time. Some encounters can see you locked into a sequence on inescapable strikes, which can be a bit frustrating.

Swapping between characters becomes an integral exercise, or you can use the shoulder buttons to deliver commands on the fly. I found taking direct control would shift the focus of monsters, giving me valuable time to heal amidst moments of chaos. The impact of combat feels wonderful whether your fists are flying as Tifa or you’re firing off bullets from a distance as Barrett. This satisfaction only grows fonder as you level up and earn new abilities.

The progression system is your standard JRPG fare, with characters levelling up after gaining experience, and each weapon possessessing its own upgrade tree that allows you to unlock additional attributes, materia slots and other bonuses. Materia, the world’s term for magic, can be slotted as individual abilities or as elemental effects for weapons. There are also summons: giant beasts who can be summoned during longer battles to unleash hell upon the opposition. Sticking around for only a minute or two, they depart the battlefield with a devastating finishing move.

I was surprised how the challenge of landmark fights mirrored the original in terms of length and complexity. The Scorpion Sentinel requires you take cover behind dynamic debris as his tail laser erupts, while Abzu spews water forth from the sewers capable of both stunning and poisoning the player. Fights that were relatively static back in 1997 now feel alive, massive set-pieces in their own right that erupt with delightfully orchestral flair. They’re nail-biting and incredibly rewarding to best even on the default difficulty setting. 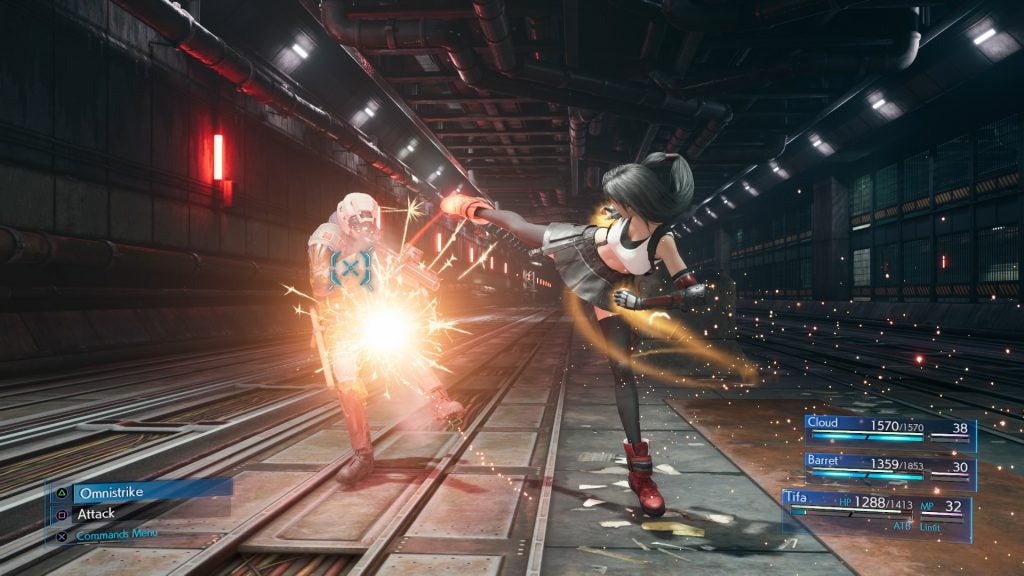 Exploration is one of Final Fantasy 7 Remake’s weaker ingredients. For the most part, it’s linear, although there’s a handful of towns throughout your journey which house side quests and other distractions. They’re little more than filler, with only a few serving out worthwhile narrative excursions and physical rewards. Otherwise, they feel surprisingly half-baked, like Square Enix felt the need for optional content even if it didn’t fit their broader vision.

Wall Market and the Sector Slums are visually repulsive, sporting low-resolution textures and iffy character models that go against the otherwise spellbindingly gorgeous worlds. It’s a usual case of discordance, and something I hope is addressed in a future update since such an eyesore just feels out of place when everything else is cream of the crop. Having to backtrack through these aforementioned areas in the final act is another annoyance, although it’s rough edges are often hidden underneath the guise of darkness and bright neon lights.

One silver lining to the mediocre side quests is the optional story sequences unlocked by clearing them in each region. Unlocking new cutscenes with Aerith and Tifa made the chores worthwhile, adding an extra layer of development to characters already brimming with complexity. Beyond this, I hope the next chapter works on refining everything there is to do outside of the main scenario. Endgame content such as a combat simulator and optional bosses are excellent if you’re willing to hunt them down and put in the time. 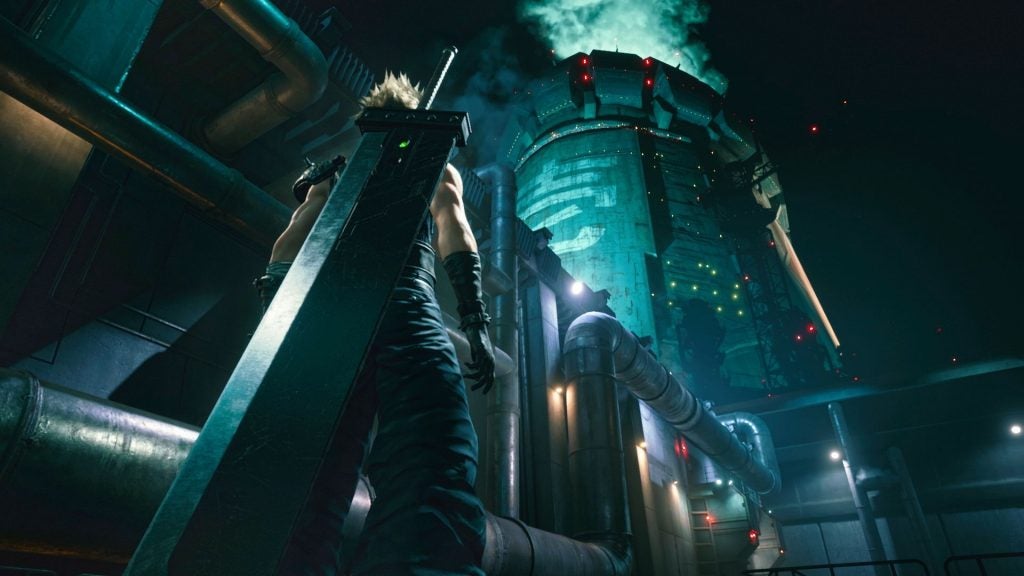 One burning question many fans will have is: how does Final Fantasy 7 Remake modernise some of Midgar’s most iconic moments? I’m happy to say it does so with flying colours, improving upon its origins in the majority of cases. My personal highlight is the Honeybee Inn, which sees Cloud crossdressing to infiltrate the sleazy mansion of Don Corneo. To earn admission, our hero reluctantly takes part in a stunningly directed dance sequence that is so bizarre, so unexpected and so perfectly executed that it works despite the world’s overall tone.

I urge anyone to watch this moment and not leave with a look of amazement on their face, either because of sheer joy or genuine bewilderment. Final Fantasy 7 Remake is filled with moments like this, each one more surprising than the next. This all culminates in a bold and breathtaking finale that pushes the franchise into uncharted waters which I’m so keen to navigate.

I hazard to say if Final Fantasy 7 Remake is superior to its predecessor since that argument feels reductive given what’s been accomplished here. They both exist and excel in their own ways, and Square Enix’s modern vision is clearly a fundamentally different one to what came before. It’s brave, unexpected and masterful in its delivery of a beloved tale that has aged magnificently.

This is one of the finest JRPGs in recent memory, setting a new benchmark for visuals and real-time combat in the series while managing to begin retelling one of gaming’s greatest tales in grandiose fashion. It’s just a crying shame we have to twiddle our thumbs and wait for the next chapter.