Elder Scrolls Online is one of the biggest MMORPGs in the world right now, so it makes perfect sense that Zenimax Online Studios continue to produce ambitious new expansions for the fantastical adventure. Elsweyr is the next in this long line of updates, bringing dragons to the world of ESO for the very first time. Sadly, you won’t find Dragonborn roaming about the place this time.

Trusted Reviews recently had a chance to go hands-on with Elsweyr to explore its vast plains filled with dragons and other dangerous creatures, and we came away pretty impressed with the steps taken to make the whole experience accessible for newcomers.

So, without further delay, read on for everything you need to know about Elder Scrolls Online: Elsweyr including all the latest news, release date, trailers and more. 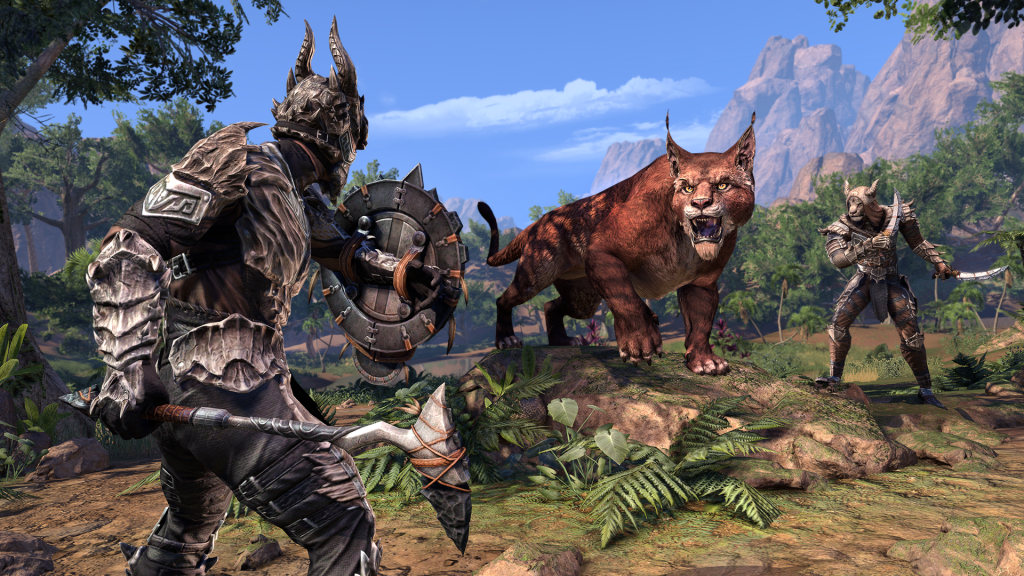 You’ll encounter plenty of beasties across the land of Elsweyr

Elder Scrolls Online: Elsweyr release date – when is it coming out?

Bethesda has confirmed that Elsweyr will launch across PS4, Xbox One and PC on June 4, 2019.

Early access across PC/Mac will begin on May 20, providing seasoned players with an extra couple of weeks to try things out ahead of general release.

Elder Scrolls Online: Elsweyr trailers – How does it look?

We’ve compiled some of the latest trailers for Elder Scrolls Online: Elsweyr below for your viewing pleasure:

Like most major expansions, Elsweyr expands upon the world of Elder Scrolls Online in some dramatic ways. Of course, the biggest addition comes in the form of Elsweyr, a region of Tamriel that now acts as a fully explorable zone for players to delve into. You can catch a little more detail from the expansion’s official description:

“Dragons return to Tamriel in The Elder Scrolls Online: Elsweyr, part of the Season of the Dragon year-long adventure! Explore sun-blessed savannahs and canyons, defend the Khajiit homeland, and command the merciless undead with the Necromancer class in this all-new Chapter of the award-winning Elder Scrolls Online saga!”

Elsweyr begins with a new tutorial area, providing players with a brief yet gentle excursion that does a relatively good job at introducing both all the mechanics you’ll be using and stakes regarding the unfolding narrative. Dragons are back, and it’s your job to find out why and put a stop to them. Sadly, you can’t ride them just yet. Fingers crossed for some rad mounts in the full release!

This also gave me the perfect time to try out the new class – Necromancer. The developers said this has been highly-requested by fans for years, bringing the morbid occupation to life in some really interesting ways. Well, I could only experiment with it so much in the brief hands-on session. 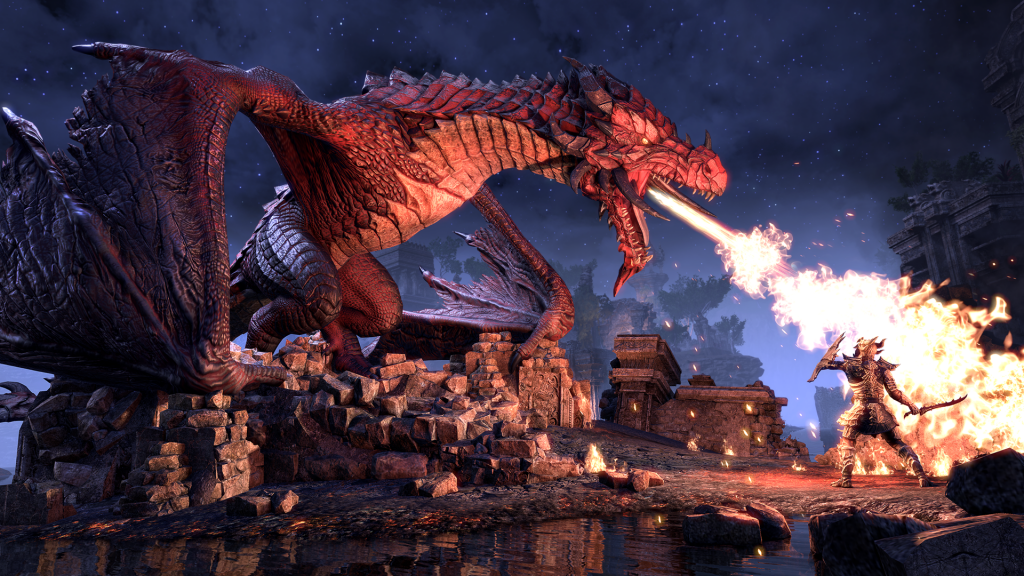 Dragons in Elsweyr are fierce foes, and you’ll need to work with other players to take them down.

After defeating a few weaker enemies with my sword, I finally levelled up enough to gain some abilities. It’s predictably macabre for a Necromancer, with one skill having me fire undead skulls towards enemies while the other unleashes an area-of-effect scythe to devastate those nearby. They’re fun, flashy and feel well-suited to the game’s early stages.

The majority of combat still feels like a floatier rendition of mainline Elder Scrolls titles, but compared to other contemporary MMORPGs it’s wonderfully accessible and feels great to play. You’ll need to dedicate a lot of time to reach worthwhile levels of strategy, so newcomers to Elsweyr might feel deflated until then.

Once the tutorial wraps up I’m assaulted by a dragon before the reptilian assailant flies toward the horizon, no doubt leaving me alone until the plot calls for it. I was told that encounters with them can be dynamic throughout the world, encouraging players to band together and fight back, but I didn’t see this for myself. 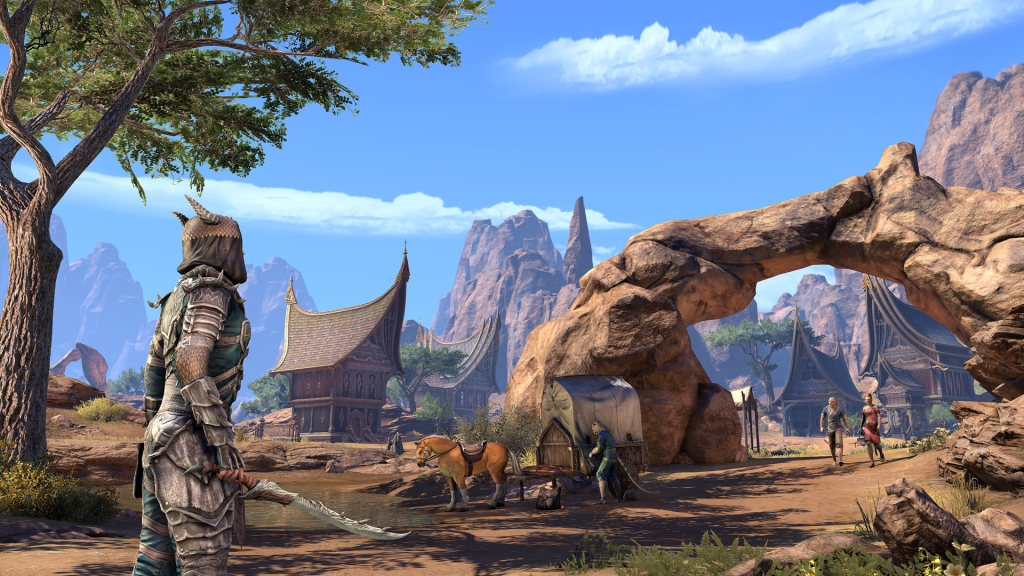 The sun-scorched plains of Elsweyr are filled with familar faced hardcore fans will recognise,

Acting as the homeland of the Khajiit, Elsweyr is a tropical wonderland filled with scorching sands and compromising grasslands you’ll be free to explore. I only caught a small glimpse at what looks like a massive new zone filled with things to do, and that’s without even mentioning the capital city of Rimmen.

Pitched as a breeding ground for bloodthirsty mercenaries, this will likely be your hub for major quests and meeting up with fellow adventurers to tackle public dungeons and other new world events. 30+ hours of content are promised in Elsweyr, which will culminate in an all-new trial known as Sunspire.  Quest objectives seem rather predicable, but I feel it will be the characters and stories contained within them that really shine.

I can’t wait to see what the Dragon Hunts are all about. The idea of embarking on huge, multi-tiered quests on the hunt for legendary beasts has such potential, and I feel Zenimax has the skill to pull it off. I’m far from a veteran when it comes to Elder Scrolls Online, but a lot of what I’ve seen has me tempted to dive in despite the ungodly time commitment.

Some of the technical problems I encountered were difficult to ignore, although it’s worth noting this was a work-in-progress build. Dragon animations were particularly ropey, pulling me out of what should’ve been an epic confrontation. Instead, it felt almost comedic in how they lifelessly flapped around. This will likely be fixed before release, though.

What do we think?

Elsweyr continues the streak of engaging expansions for Elder Scrolls Online, bringing with it an entire new land to explore that feels distinct from what came before it.

Dragons roaming wildly throughout an MMORPG environment teases so many exciting prospects, forcing players to band together and fight a larger-than-life threat ESO hasn’t seen before.

Accessibility for newcomers is the cherry-on-top, with a new tutorial making it possible for fledgling players to jump in and not feel overwhelmed.

Are you a fan of Elder Scrolls Online? Excited for Elsweyr? Let us know on Facebook and Twitter @trustedreviews.