Available on PC (reviewed), Xbox One and PS4 coming summer 2014

Luckily, The Elder Scrolls Online turns out to be much, much better than expected. It looks and feels like an Elder Scrolls game, and departs from the established WoW template enough to distinguish itself. It’s beautifully designed, story-driven, and shows immense respect for the world of Tamriel and its extensive background lore.

There are areas where it lacks polish and places where the technology or the gameplay could be more advanced or more refined, but if you’re an Elder Scrolls fan, then you shouldn’t go away disappointed. As long as you don’t see it as a sequel to Oblivion and Skyrim, TESO is a fine Elder Scrolls take on the fantasy MMORPG. 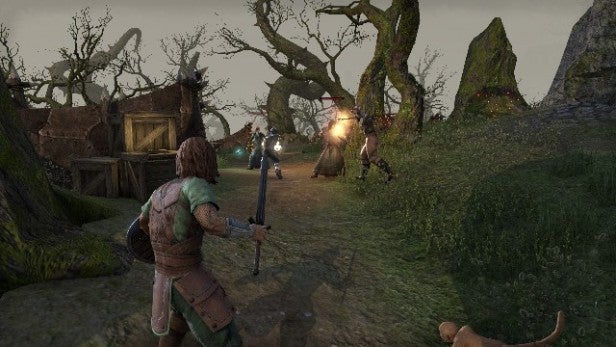 Like Skyrim and Oblivion it opens with a bang, with your newly created hero awakening in the Daedric plane of Coldharbour as a ghostly prisoner with a shriven soul. Escaping from your hellish cell thanks to the efforts of a group of heroes, you find your way back to Tamriel with the aid of a mysterious prophet.

It turns out that you (along with several million other players) are destined to play a key role in the upcoming battle against the fiendish Daedric prince, Molag Bal, in events that precede Skyrim and Oblivion by the best part of 1,000 years.

From there, it’s almost up to you. During character creation you can choose not just your physical appearance but your race, your class and your alliance – Dominion, Daggerfall Covenant or Ebonheart pact – with the latter choice defining your start zone.

First there’s a new city to explore, then the areas of wilderness around it, before you go on to discover new cities, sail off to exotic islands, and tackle your first dungeons. There are main story missions to keep the plot moving along, but also dozens of quests and side-quests, most tying into an overall story arc that might see you fighting to save royalty from assassination, spoil a truce between groups of evildoers, destroy a witches’ coven or simple prove how tough you are to new friends. 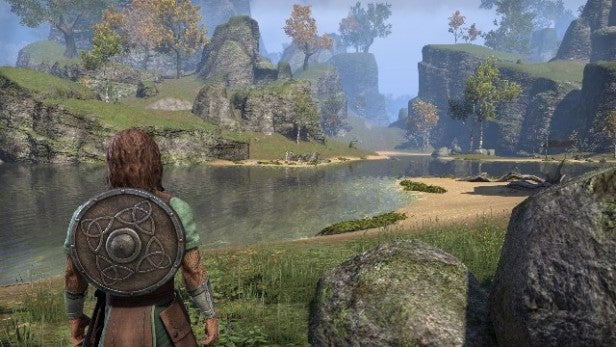 Exploration has always been at the heart of The Elder Scrolls, and it’s something that TESO gets absolutely right. Simply wandering around the landscape, creeping through murky forests and ancient ruins is a thrill, and you can feel free to pick up and discard what quests you like along the way.

Inevitably, you’ll eventually bite off something that you can’t chew, but the game is happy to let you wander off and tackle something else, then come back when you’re ready. What’s more, TESO gives you the chance to rediscover classic Elder Scrolls locations in an earlier period, so you’re free to revisit Cyroldil, take a peak around Daggerfall or tackle parts of Morrowind and Skyrim.

Quest design is another strength. Like Star Wars: The Old Republic or Guild Wars 2, TESO does a great job of making you feel part of an unfolding story, and does an even better job of framing quests in a narrative, so that you’re rarely killing 10 of this and collecting 10 of that, or collecting object X and delivering it to person Y.

Each quest is its own mini-drama, and while the mechanics aren’t that unconventional beneath the surface, the questing doesn’t feel so grind-heavy or mechanical. Again, it feels like an Elder Scrolls game, not WoW with an Elder Scrolls skin. 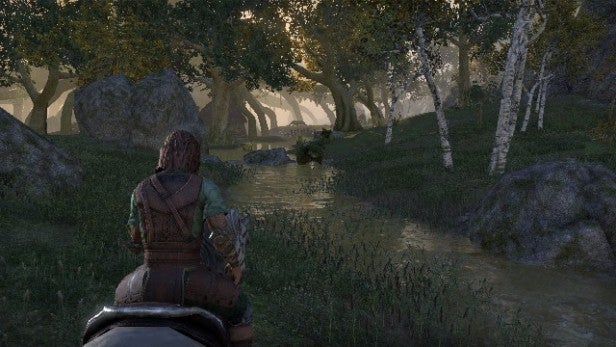 The combat isn’t quite so convincing, as it’s a bit of an awkward halfway house between the conventional Elder Scrolls system and a standard MMO.

You can play from a first or third-person perspective (the former makes it feel more Elder Scrolls), and attack with one mouse button while blocking with the right, but you’ll also need to use a WoW-style hotkey bar to use spells and special attacks – and with only six slots you could really do with a little more space. It’s a strange decision, especially when timing and positioning count.

You need to be aware of enemies – some will quickly shift position or quickly somersault behind you – and blocking and evasion moves are crucial. Simply spamming away at the hotkeys will often get you nowhere.

However, there seems to be some lag between keypresses and something happening on-screen, which makes the action feel a little divorced from what you’re doing. It’s something you acclimatise to, but it can be a shock if you’re used to more action-oriented games. 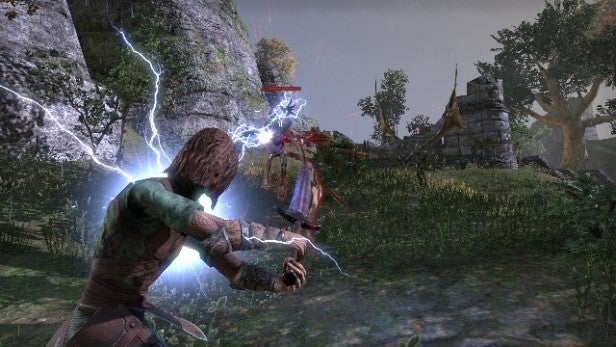 Throughout, there’s a great sense of progression. As you gain experience and level up you gain attribute and skill points, the former being used to boost your fundamental health, stamina and magic levels, the latter being used to unlock new active and passive capabilities.

Whether you opt for a more combat or magic-focused class, you’ll find a host of ways to build your character moving forwards. There are plenty of spectacular spells and attacks to deploy, not to mention abilities with which to boost your own offensive and defensive capabilities, or those of any comrades.

Throw in a choice selection of mounts, pets, arms and armour, with new gear being dished out for completing certain quests, and TESO gets another Elder Scrolls principal correct: it makes you feel like you’re becoming more bad-ass, without putting your nose to the grindy old grindstone.

Visually, TESO might come as a slight disappointment. Whack the detail options up to maximum on a half-decent gaming PC, and you’ll see some awesome wilderness vistas, and the architecture, props and creatures are never less than beautifully designed.

The lighting effects are a step on from Skyrim and Oblivion, with some nice atmospheric fog and sunlight effects too. Yet draw distances aren’t always what they could be, and TESO can’t quite match the detail or the majesty of Skyrim.

It’s a very good-looking MMO, but not necessarily a cutting-edge RPG. 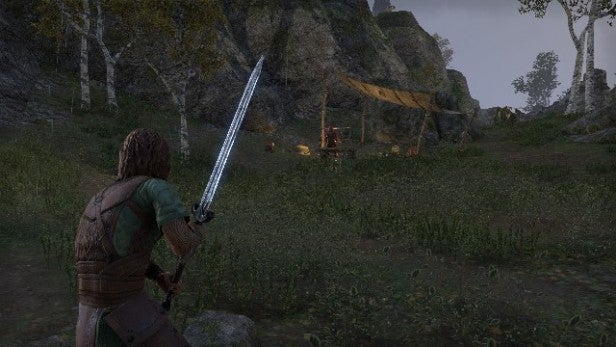 On the other hand, it’s hard to fault the production values. There’s an awful lot of dialogue, with familiar names including John Cleese, Michael Gambon, Bill Nighy and Jennifer Hale. The close-up animation is actually an improvement on Skyrim’s, and the orchestral store is just as stunning.

There’s also lore everywhere you choose to look, with books, journals and letters all to be read if you can find the time, each one either giving you some tip on combat, crafting or spellcraft, or filling in some detail of Tamriel’s extensive history.

It’s not flawless. While the servers seem fairly stable we’ve encountered plenty of downtime during the early access period, and you’ll sometimes see weird things like horses skidding around the cities with their legs unmoving, or find a skyshard – a vital collectible – that doesn’t seem to activate.

The monsters have their unintentionally comic moments, too. Bethesda has wisely chosen not to make them too active, so that you don’t get swamped by a mob on entering a new area, but it’s sometimes possible to pick off a whole group one-by-one while their chums stand idly by. It might be necessary, but it’s not always convincing, and it spoils an otherwise very worthwhile stealth mechanic. 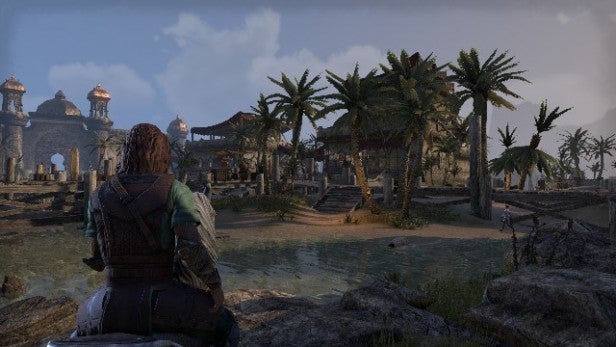 Most of all, TESO can seem an odd halfway house in the early stages. You can play through extensive chunks of the game completely solo, as if you were playing an Elder Scrolls game that just happened to involve other people.

Often this works brilliantly, and you’ll still find yourself getting involved in ad-hoc parties, as you all work together to complete the quest you just happen to all be doing at the same time. This sometimes makes you feel like you’re ganging up on the poor little monsties, but it certainly makes life easier and more enjoyable.

Then, however, you’ll find yourself alone and unable to deal with certain situations, and find the going all but impossible without some friends.

Now, TESO actually has some great group-finding features, including what appears to be a handy auto-grouping tool. You actually have to assign yourself a role – tank, damage dealer and healer – and this should help everyone find a party and play a useful role. Yet with so many people soloing through the early stages we’ve still struggled to find other members to take missions with.

This isn’t a disaster. Many MMO-players play with established groups, and joining guilds and generally behaving in a friendly manner helps. And even if you are playing solo, you can usually find something else to do, or look and listen for signs of battle and then lend a hand.

It’s early days yet, and as more people get more involved in the game, such things usually improve. 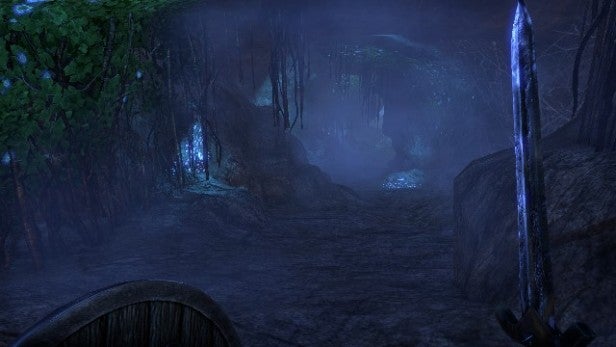 In fact, the point about early days is very important. This is a new game, and those of us playing it are still only scratching the surface. We’re still working our way through the first set of quests, we’re still mapping out the territory, and we’ve barely got to grips with crafting, guilds or what the various alliances will come to mean.

We’ve yet to get stuck in to the PvP content. What we can say right now, though, is that this is a very promising beginning. It’s both instantly engaging and intensely absorbing, and should pull in both MMORPG fans and Elder Scrolls fans without any trouble. To make sure, we’ll come back with an update in the next few weeks.

The big question, of course, is whether it will succeed long-term. Like Star Wars: The Old Republic, TESO has adopted a pricey subscription model, this time charging £8.99 a month, and we all know how well that worked out there. In its favour, there’s a lot of content already here and the promise of even more to come, and Elder Scrolls fans have never struggled to spend months inside the game, or to come back for expansion packs and DLC. You’ve done the groundwork, Bethesda, you just need to provide players with enough incentive to keep coming back for more.

Verdict
If you had The Elder Scrolls Online down as another MMO turkey, think again. This is a good Elder Scrolls game and a solid MMO, even if it can’t quite scale the same heights as Skyrim or provide such a satisfying experience for solo players.

Still, there are other, more social pleasures to be found here, the story-led questing works brilliantly, and Tamriel is a great place to explore. Whether you’re a lapsed WoW veteran or an Elder Scrolls fanatic, you’re unlikely to go away dissatisfied.