Call of Duty: Black Ops 4 launched late last week and with it came their first attempt at a battle royale mode. Blackout is essentially PUBG, but with the polish you’d expect from a triple-A title. It’s had a great start, consistently being one of the top streamed games on Twitch and selling record breaking units for Activision, but what about the mode itself? Here’s our top six tips for Blackout, to help you earn that all important victory.

Flying and landing is much different in Blackout compared to other battle royale games like Fortnite and PUBG. You’re equipped with a wingsuit, so you can gain some serious speed in the air. You’re even given an altitude metre so you know exactly when your parachute will deploy, depending on the level of the terrain you’re flying over.

How does it work? Basically, the more vertical you’re flying, the faster you’ll be. Aim directly down when you jump out of the helicopters for a few seconds and you’ll pick up the pace. Level yourself out then aim for your chosen destination and you’ll reach it in no time at all.

In every battle royale game, the locations at the start of the flight are always going to be the most popular. We’ve found that’s even more likely in Blackout though. At least half of the lobby tend to leap out and plummet to the ground at breakneck speeds, as soon as the button prompt to jump appears.

Instead, just give it a few seconds. Aim for somewhere on the outskirts of the map, not too close to the helicopter, and you’ll be rewarded with far less players to deal with when you get there.

Jumping out straight away means most of the time, you won’t even find a gun and it’ll become incredibly frustrating when you keep dying right away because there the only weapon nearby is in the hands of the enemy that put you down.

Related: Blood of the Dead – Tips and Tricks In Fortnite, you can fight anyone then take shields right after and be right as rain. In Blackout, you’ve only got the one armour. If you have a close fight where you have to heal up right after, chances are you’ve taken a lot of bullets to the chest and your armour will be completely destroyed. You won’t find any on your victim either because their armour will have been shredded in the process.

Make sure you’re playing smart and choosing who you fight. If someone hasn’t seen you yet, don’t start wildly spraying at them. Follow them, get as close behind them as you can, then drop them before they can react. That way, you keep your armour fully intact.

Always aim for the head

It ties into the last tip but make sure you’re always trying to get a headshot. Level three armour is the only one that contains a helmet, so if your opponent doesn’t have that, shooting them in the head won’t damage their armour at all.

That means that you can then swap your damaged armour out for theirs at the end of the fight. A level one armour plate is far more useful than an almost destroyed level two. Plus, headshots do more damage in general so you’ll kill them quicker. Which – believe it or not – is very helpful when the bullets start flying.

Perks in Blackout are found all over the floor as consumables that expire on a timer when you use them. There’s some really great ones there, such as Dead Silence which muffles your footsteps and allows you to sneak up on one of your adversaries much easier. Skulker is another; you’ll move much quicker when crouching, almost at the same speed as if you were sprinting.

There’s also some naff ones like Brawler and Iron Lungs. You can only carry 10 items at any one time with a backpack, so just don’t bother with either of them at the start of a game. Brawler increases your melee damage, which will very rarely come in handy on such a large map. While Iron Lungs allows you to hold your breath with a sniper for longer. Sack them off and save room for more useful items. 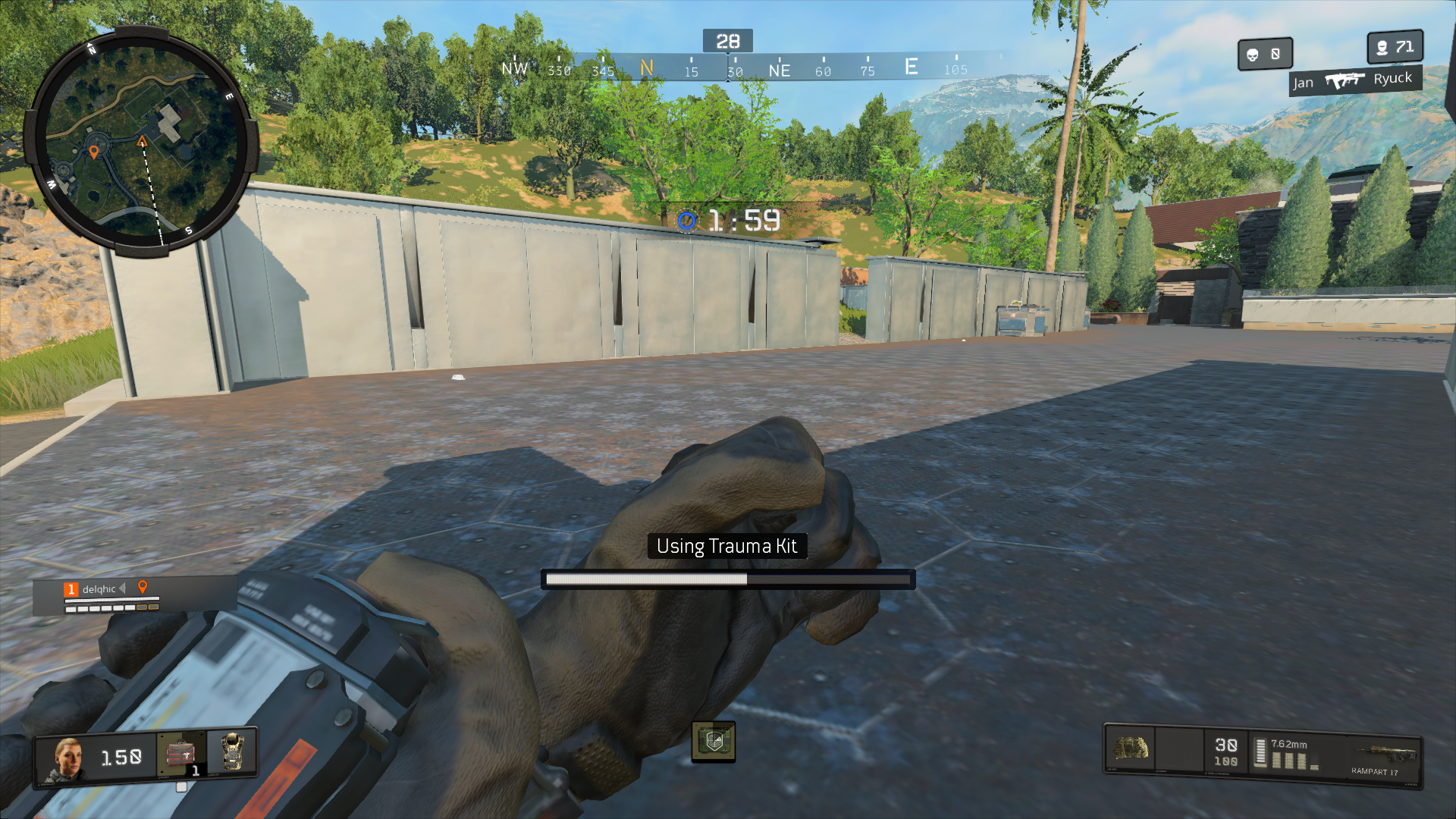 Trauma Kits are the best healing item in the game. No matter what health you’re at, they’ll instantly shoot you up to 200 – 50 more than the usual cap of 150. They’re great to use right after a fight, but consider using them as you find them.

If you’ve got a healthy stack of Med Kits or Bandages, just pop a Trauma Kit right as you find one. That extra 50 health will come in handy as soon as you do get in a fight, especially if you find more Trauma Kits along the way.

Blackout’s map isn’t small by any stretch of the imagination. If you land at Turbine and the safe zone is all the way up by Construction Site, you’ve got a hell of a trek on your hands. There’s vehicles dotted about the place, such as quad bikes and helicopters but they are really, really, REALLY loud.

As soon as you start covering ground in a vehicle, anyone in the vicinity will be alerted to your position. Whether you’re in a ground vehicle, an airborne helicopter or a speedboat, people will latch on to you the second you hit the throttle. There’s not much protection on any of the vehicles so we’d recommend only using them to cover short distances. Dart from one cluster of houses to the next then travel as much as you can on foot. And if someone targets you with a Hellion Salvo, be ready to bail at a moment’s notice.

Have you managed to snag a victory in Blackout yet? Let us know on Facebook and Twitter @trustedreviews.