PlayerUnknown’s Battlegrounds finds itself in a weird place. In many ways the game has never been stronger, with new modes, more maps and a growing eSports following – July’s 2018 Berlin Invitational was widely acclaimed as a huge success. Yet there’s an argument that the game’s popularity has peaked, with concurrent players on Steam down from 3.2 million in January to 1.75 million in July, and that there’s more momentum behind its free-to-play rival, Fortnite. Is PUBG on the way down?

PUBG didn’t kickstart the Battle Royale genre, but it was the first to refine all the elements and really make them work. Inspired by Kinji Fukasaku’s 2000 movie, a Battle Royale game sees a large number of players thrown into a single area – in PUBG’s case, 100 – where they battle it out until only one survives. To improve their chances they can scavenge for weapons, weapon modifications, body armour and ammo, all of which give them some hope of not dying within the first seconds of a gunfight.

But that’s not all. Cleverly, each map is assailed by weird electric storms surrounding a circular safe zone. This steadily shrinks as each phase of the game goes on, and unless players can reach and stay within the safe zone, they’ll lose health at a rapid rate. This ensures that players are forced to keep moving, and funnels them together to make a dramatic, violent endgame. What’s more, players have to dodge the dangerous, unpredictable red zones, where a sudden bombing raid could put them out of action before they get a chance to take a bullet in the head. 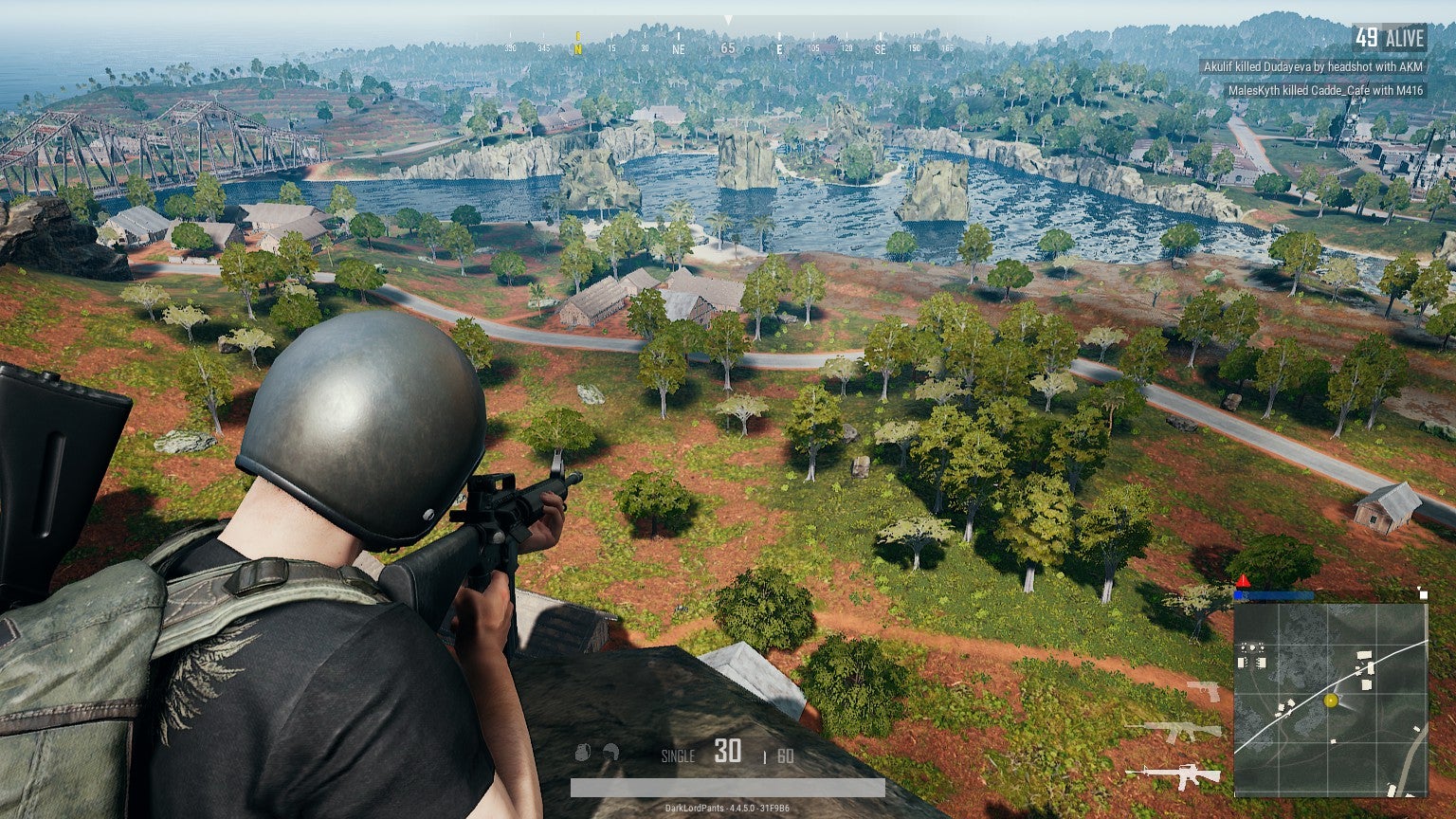 One of PUBG’s beauties is that it’s not just about the combat. You actually spend relatively little time shooting – a risky business where you’re likely to get killed – and more time exploring your surroundings, searching and looting the various buildings and avoiding falling prey to an ambush or cheap sniper shot. There are vehicles to race around in and some top gear to collect, but your primary responsibility is just to not get killed – and if you make the odd kill along the way, all the better. It’s not like a Call of Duty or even a CounterStrike; it’s tense, nerve-wracking, unpredictable and immersive, with a layer of tactical depth that few other shooters can match. Psychologists and game theorists could write papers about how doors operate in PUBG.

The core game was brilliant long-before PUBG launched, but the team has made considerable strides in improving stability and performance (not always strengths) and just making it better. The added maps, for example, don’t merely vary the scenery but change the way you play. The original pseudo-Soviet island, Erangel, gives you the classic PUBG experience, while Miramar, the Central American desert map, has more challenging terrain, denser urban areas and lots of large, empty spaces where you’re at the mercy of snipers. It’s a map where you learn to move quickly and decisively then hole up a while to scavenge, always looking nervously at where the circle’s moving to. 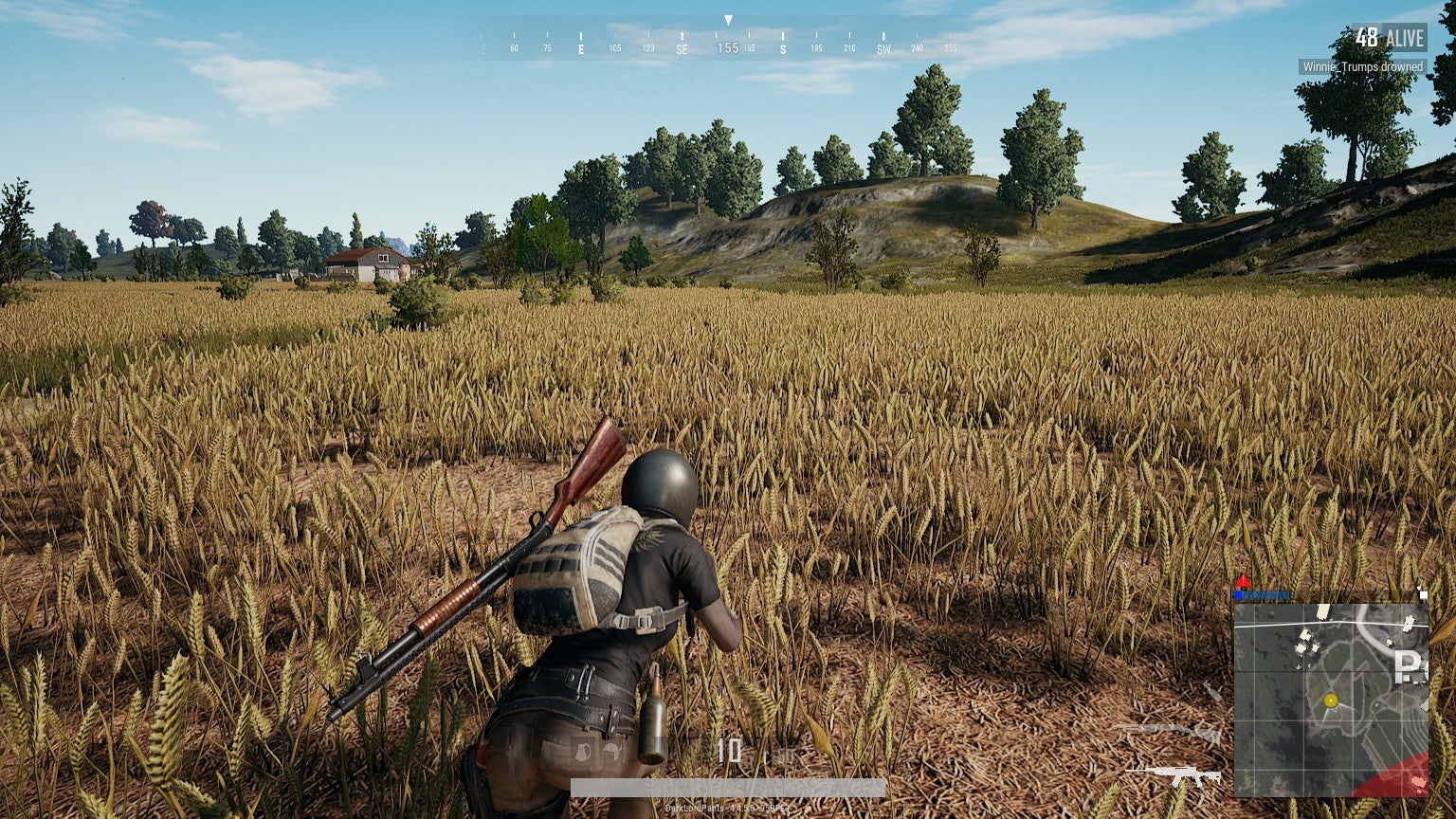 It’s the third map, Sanhok, that’s a game-changer. A quarter of the size of the other two maps, it’s designed for shorter, more action-packed games, with a dynamic circle that shrinks faster or slower depending on how many players are still alive. One of the biggest issues naysayers used to have about PUBG was that it was half an hour of lurking followed by thirty seconds of fighting, repeat, but Sanhok keeps players moving and ups the pace. Even if you’re inclined towards a camping, sniping play-style, Sanhok forces you to leave your perch behind and keep rushing to the next circle.

On PC, PUBG runs at a better frame rate than it used to and seems more polished, though the visuals can still look a little dull and utilitarian, the focus on realism robbing it of the personality you’ll find in Fortnite’s vibrant cartoon battles. Yet there’s something about its three settings that feels oddly believable and real. The more you play, the more its areas become both familiar and threatening; there’s little time to enjoy the view when you’re scanning the scenery for movement.

It’s also a game where sound matters, gunshots in the distance providing your first warning that trouble might be getting near, quick footsteps in the immediate area letting you know to be on your guard. PUBG isn’t trying to build suspense but it does it anyway, each map packing in moments of rising tension or sudden shock scares. And while it can be a lonely experience played solo, it can also be a riot playing Duos or four-man squads, though not as much with random squad-mates as with friends. 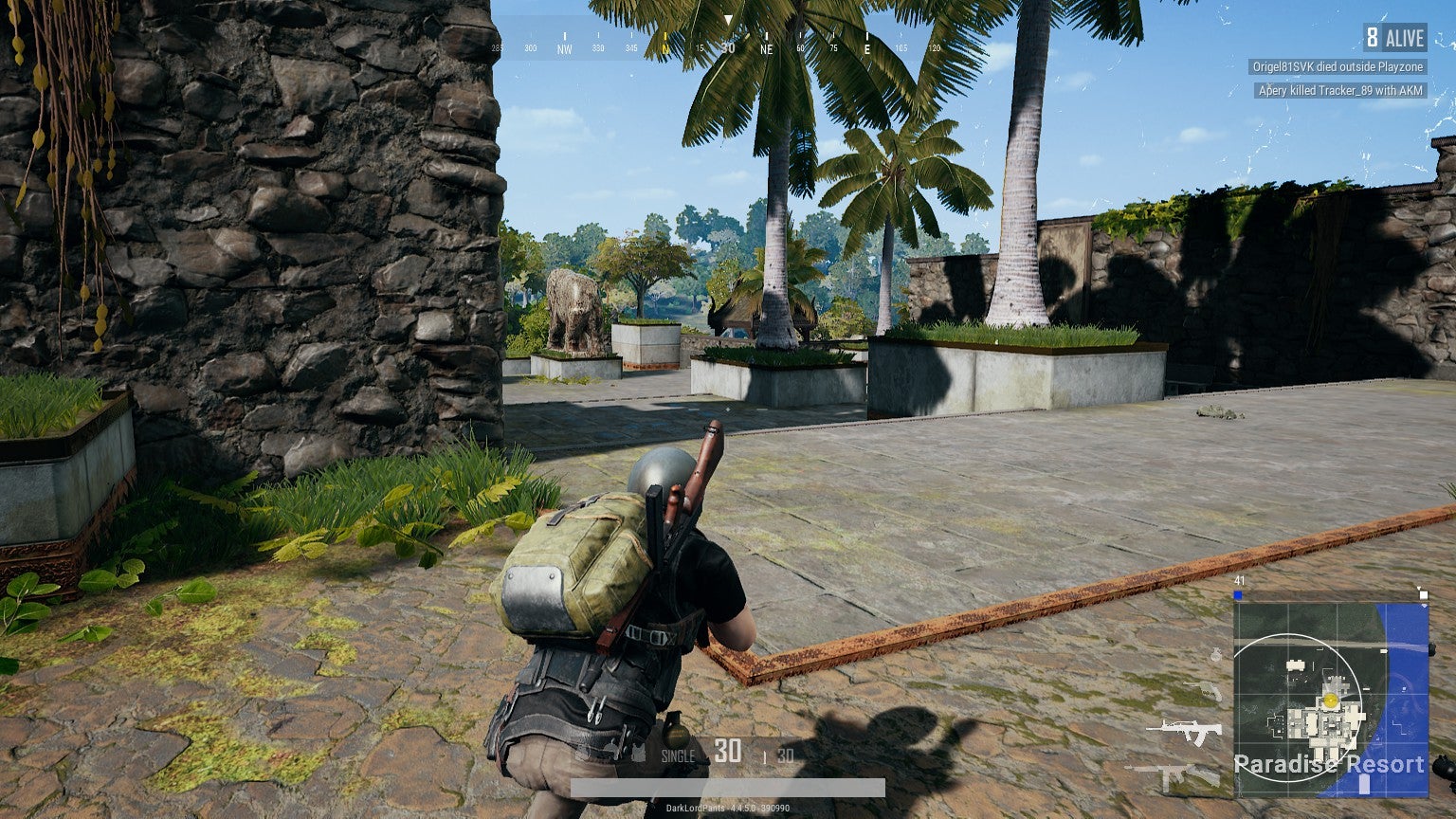 Play on Xbox One or One X and you’re still looking at a slightly second-rate experience, but a vast improvement on what we had at the Xbox Game Preview launch. Most of the stuttering, lag and texture glitching issues have been dealt with or reduced, though there are still moments when artefacts appear or the frame rate plummets.
The Xbox One controls remain unwieldy, particularly when slotting weapon upgrades in the inventory, but the basics of aiming, moving and shooting seem more fluid, with improved weapons handling. The one big downside of playing on console is that you currently miss out on the Sanhok map; arguably the map best suited to the less patient, more excitable console crowd.

In other words, whatever your platform, this is the best PUBG that PUBG has ever been. Does that make it the best of the Battle Royale games though? Well, it depends on what you’re looking for. Fortnite isn’t hugely popular just because it’s free-to-play or available across more consoles, but because it’s slicker, faster-paced and – in a lot of ways – more fun. It’s sillier, more anarchic, still challenging yet more accessible, leaving PUBG looking angry and po-faced. There’s also an argument that H1Z1 is the bigger, better Battle Royale game if you’re looking for something more traditional. 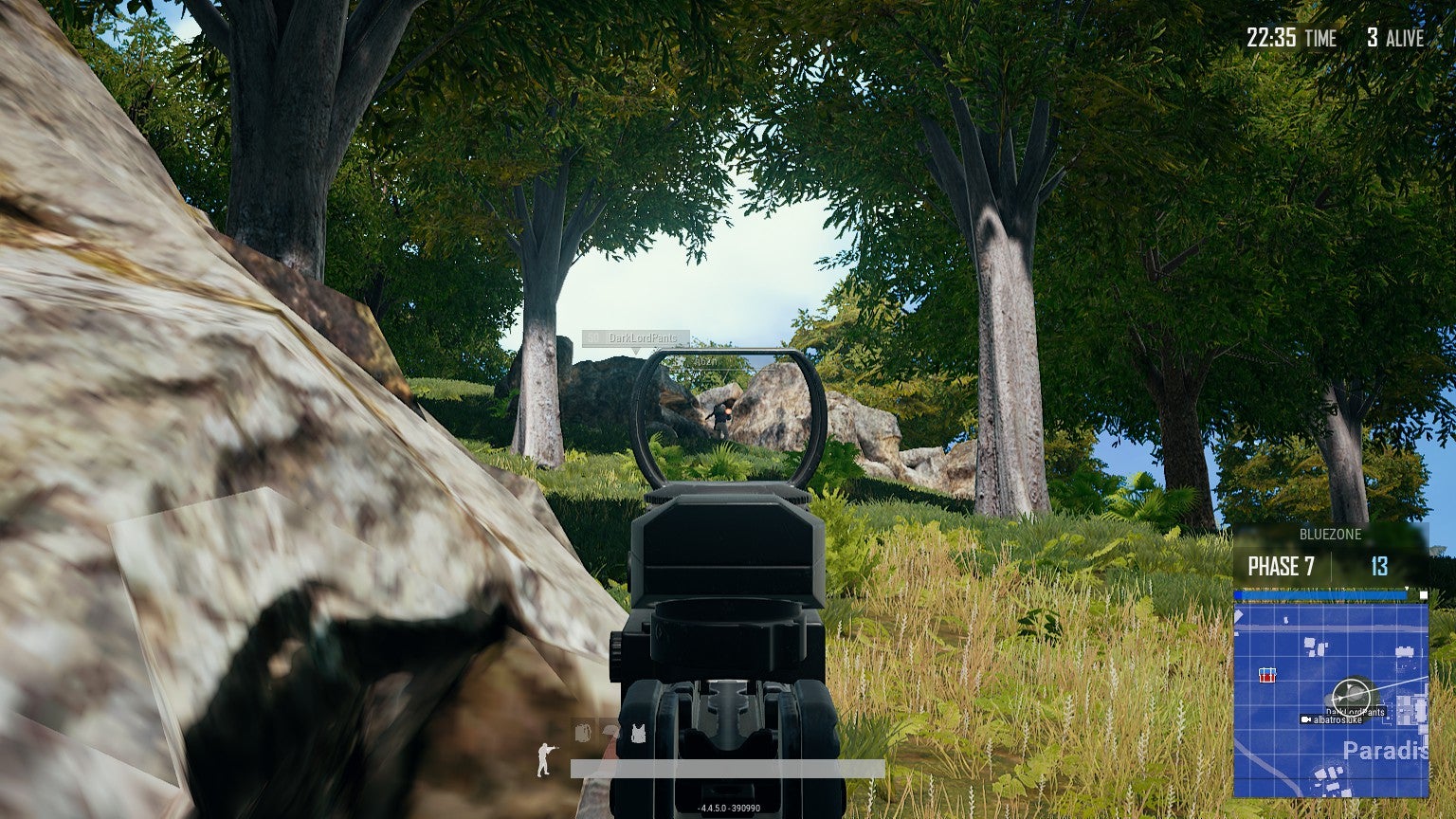 It’s also clear that PUBG is feeling the competition, experimenting with a zombie game mode and its own take on deathmatch in a bid to move beyond the basic formula. The first has potential, pitting a much larger team of unarmed biters against a tiny band of humans, but relies too much on players being able to organise themselves into some kind of ravening horde. The second, I don’t know so much about, because the servers always seem empty when I look.

Most of all, I’m not sure that PUBG needs these gimmicks, because it still gives you an experience unlike any other game in the genre. I don’t remember the hours I’ve wasted picking through houses and racing for the circle only to be picked off by a camping sniper in a tower, but the smaller triumphs and the silly schoolboy errors; the moments where my pick-up squad played a blinder and took down another team one-by-one; a long sequence of sneaking through workshops and warehouses, listening for another player trying to work out whether I was hunting them or they were hunting me. PUBG is far from perfect, but it does this stuff better than any other Battle Royale game.

Verdict
Not quite the original Battle Royale game, but close and still one of the best. Fortnite is more fun and has more sense of personality, but if you’re looking for a shooter with tension, suspense and three great, very different maps, then PUBG is still the one to play.