To the surprise of many, Treyarch has managed to hit a home run with Call of Duty: Black Ops 4, delivering three huge multiplayer modes that could easily work as standalone releases. However, they can be overwhelming, and this is especially true with Zombies.

With three vastly different stages each with their own locales, mechanics and quirks to consider, we wouldn’t blame players for having a guide by their side when hacking away at how everything works. Luckily, we’re here to help!

Levels come in the form of Blood of the Dead, IX and Voyage of Despair, all three of which we’ll be diving into throughout our guide coverage. Trusted Reviews has compiled a handy guide of tips and tricks for Call of Duty: Black Ops 4 Zombies, with this particular article focusing on Blood of the Dead.

Black Ops 4: Blood of the Dead Guide – Turning on the power

You can find two different power switches across the spooky metal confines in Blood of the Dead. Newcomers might have a bit of trouble finding these previous outlets without assistance, so we’ve listed where both of them can be found below. Activating the power allows you to open additional doors, use teleporters and purchase buffs from machines.

Power Switch 1 – To nobody’s surprise, this can be found in the Power House building. More specifically, it awaits you in the back left corner of the building near a doorway.

Power Switch 2 – This one is a bit more complicated, as you’ll need to venture to Building 64. Enter this spooky abode and you’ll soon stumble upon the necessary switch. 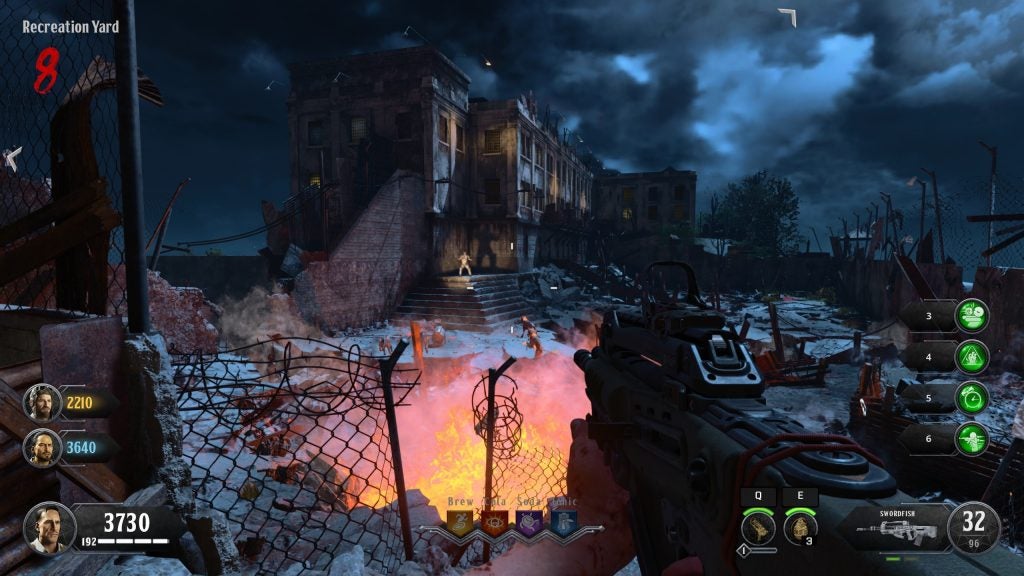 Black Ops 4: Blood of the Dead Guide – How to build the Spectral Shield

The Spectral Shield is required to unlock the Pack a Punch machine, so it’s a fairly vital bit of kit for players hoping to last more than 15 or so rounds in Blood of the Dead. We’ve put together a step-by-step guide for all of the component locations below and the right order in which to collect them.

There are a few things to gather across Blood of the Dead to make this happen, so let’s get started with the Shield itself.

Shield – Step 1: The first part of the shield can be found in the Citadel Tunnels as you ascend the stairs leading to China Alley.

Shield – Step 2: You’ll find the shield’s second part in China Alley near a window zombies will be busting their way into during rounds.

Shield – Step 3: Finally, the third piece is located right ahead of the elevator cage in Citadel Tunnels, which will be locked if the power isn’t on yet. 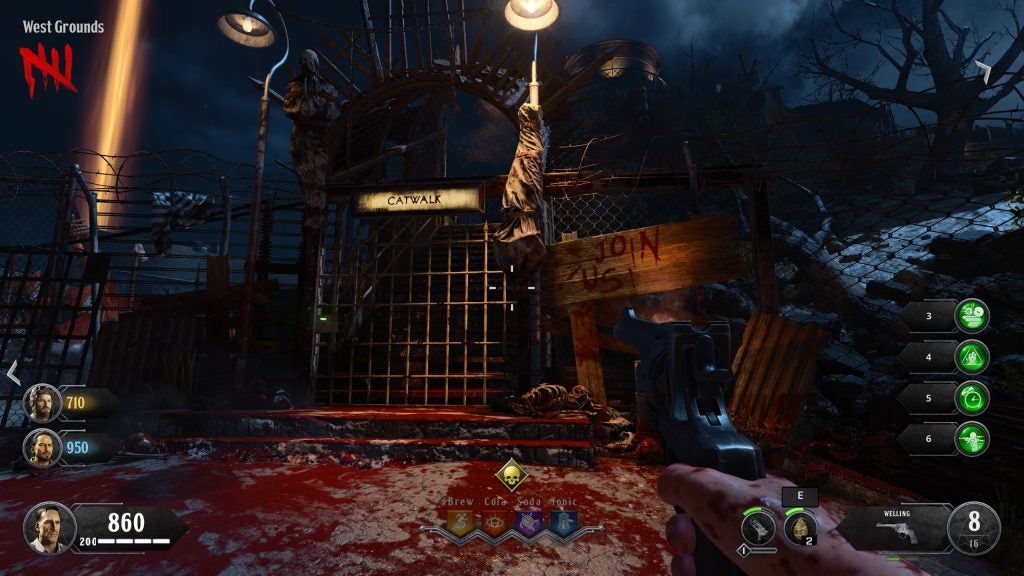 Next up in our quest to build the Spectral Shield is the Afterlife Essence, the locations of which we’ve listed below.

Afterlife Essence – Step 1: Head to the library and look for a container emitting a strange, supernatural glow. Interact with it and you’ll have the first piece of the essence.

Afterlife Essence – Step 2: It’s time to hit up Time Square, and this one is easy to spot. Look for a wall on the first floor to pick up the second part.

Afterlife Essence – Step 3: Also an easy one to spot, head to Michigan Avenue and look directly underneath the ‘Michigan’ sign.

The final part requires you to find and defeat the Brutus mini-boss, who will only make an appearance once both power switches have been activated. Defeat him and pick up the object he drops. After this, head to a workbench and get crafting to unlock the Spectral Shield. 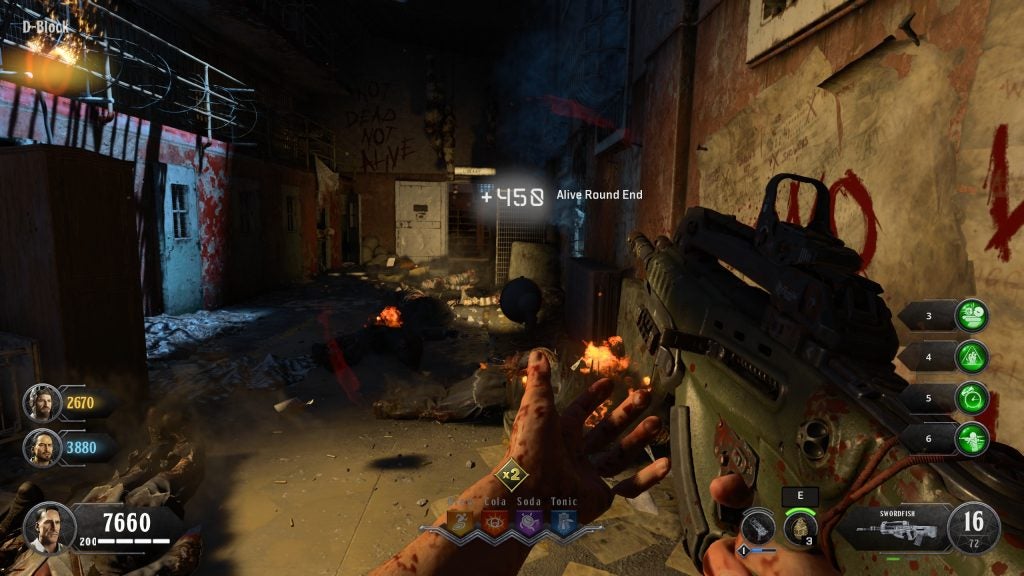 Black Ops 4: Blood of the Dead Guide – How to unlock the Pack a Punch Machine

In later rounds, unlocking the Pack a Punch machine becomes a crucial part of survival in Zombies, something which is especially prevalent across Blood of the Dead. Unearthing the machine is sadly quite a complicated process, requiring the construction of equipment and keys obtained from difficult enemies.

We’ve compiled a step-by-step guide to make things easier for you below:

Step 1: You’ll need to have constructed the Spectral Shield, a piece of equipment that is made from a variety of components found across the map. Once all the components are obtained you can fix it up a one of several workbenches located throughout the map.

Step 2: Turn on the power! We’ve included a locations guide for this very step above, and you’ll need to activate both switches before awakening the Pack-a-Punch.

Step 3: Defeat the Prison Warden. This undead menace is in possession of a key you’ll require for the Pack a Punch Machine. He can be found in Building 64 after switching on the power.

Step 4: Now you’ve got the Warden Key and Spectral Shield equipped, it’s time to head up to the rooftop, keep an eye on the location name in the top left corner of the screen to know your bearings. It can be reached by rushing through the infirmary.

Step 5: Once on the rooftop, it’s time to bust out your recently assembled Spectral Shield and start sucking up some zombie souls. Once done, kill roughly three zombies or so to power up the shield.

Step 6: Finally, now the Spectral Shield is ready, melee attack the Voltmeter on the roof to unlock the Pack-a-Punch machine. Packing a weapon will cost you 5000 points, so make sure you’re prepared before making the investment. 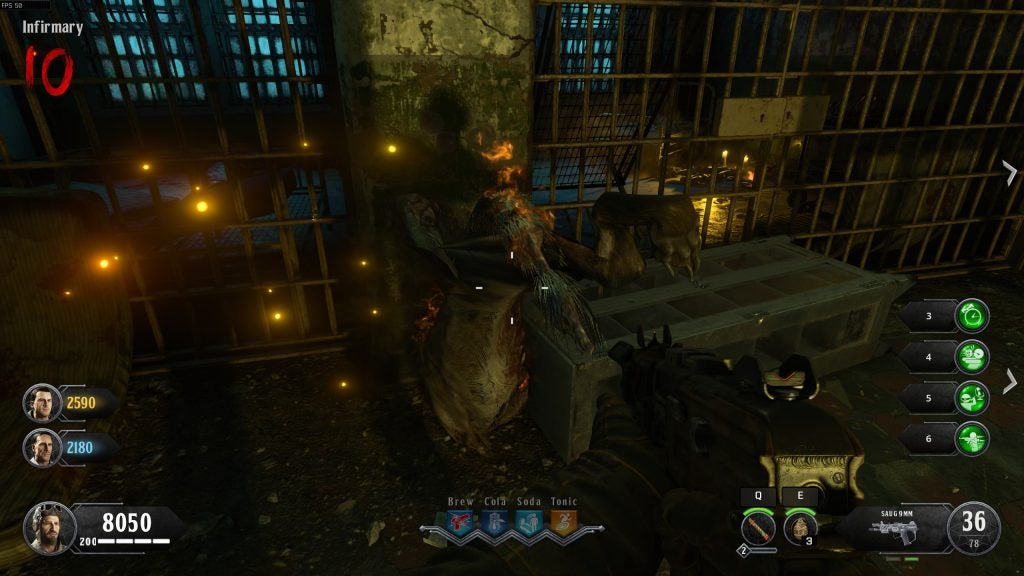 Following the initial unlock process, the Pack a Punch machine can teleport to a total of three different locations, these being: Rooftop, Dock, Spawn.

Staying in the same place or allowing yourself to be caught in a corner can spell immediate doom for you in Blood of the Dead. Aside from a handful of open spaces, the map is relatively confined with dark corridors and large buildings with multiple floors. This means that enemies are often crawling out of walls and from behind corners that can be very difficult to predict. If you can, in later rounds, lure zombies after you before firing at dozens of undead at once. Not only does this prevent you from taking damage, but does ten-fold to anything in your way.

It’s hard to blame newcomers for forgetting about the repertoire of abilities and equipment each character has access to in Blood of the Dead. You’ve got multiple potions which can be customised in the lobby, each of which provides worthwhile buffs you’ll benefit from in battle. The same can be said for Ultimate Weapons, which can range from katanas to flamethrowers. Using them results in upgrades, and building up their activation metre is surprisingly easy. 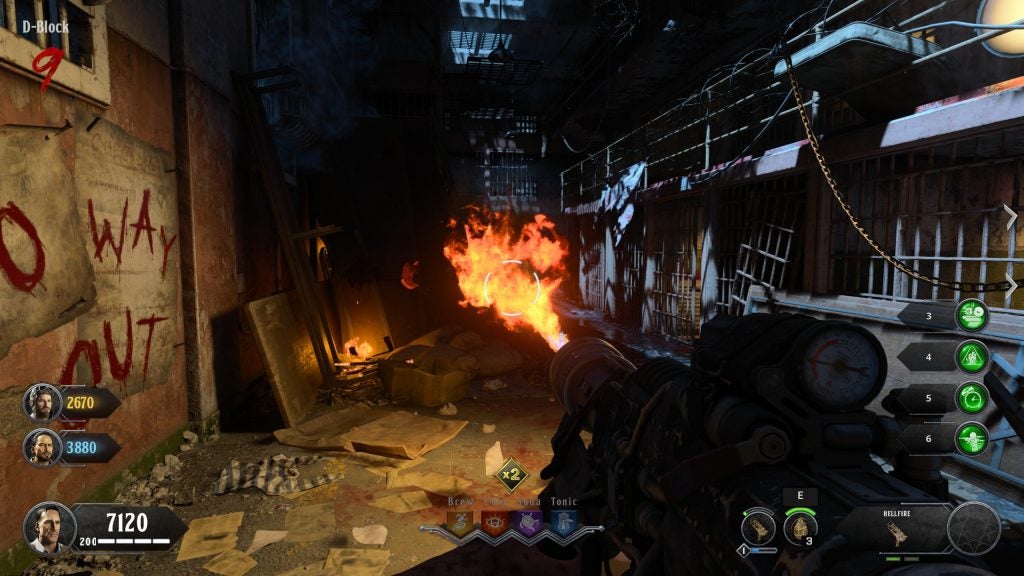 Open all the doors!

Expanding the play area can be a double-edged sword. While it provides you with additional places to explore and secrets to uncover, it also means the undead will come from a range of new directions. Blood of the Dead has them crawling from the ground, through windows and even pushing out of the walls. They feel unstoppable, but you and a determined group of friends can easily dominate them.

Once the power is switched and your weapons are upgraded, quick traversal of the map becomes essential. Luckily, there’s multiple points across the map that you can use to teleport. This is perfect for when surrounding and need to escape, or hope to flank a horde of confused undead. The animation that plays out once you teleport also looks incredibly cool.

Upgrade weapons by using them

While limited to certain firearms, using some allows you to level them up, unlocking new attachments and bonuses to be equipped after each match. Not only does this provide a meaningful sense of progression to Zombies in and out of matches, it also lends an extra layer of accurate firepower against the shambling swarms.

Have you been playing Blood of the Dead in Call of Duty: Black Ops 4? Let us know on Facebook and Twitter @trustedreviews.