Throughout the past decade or so, everything Naughty Dog has touched somehow turns to gold. The developer has crafted a series of potential masterpieces while simultaneously setting benchmarks when it comes to cinematic storytelling and engrossing set-pieces. It’s simply untouchable, and other developers who’ve attempted to replicate its style have been left rightfully in the dust, and now we finally have a bunch of concrete details on its next project – The Last of Us Part 2.

Stealing the show during a recent State of Play presentation, the latest trailer revealed an abundance of new information on Ellie’s next adventure. We now know when it’s launching, what the narrative entails and enough footage to pursue some serious gameplay analysis.

So, Trusted Reviews has compiled seven important things you need to know about The Last of Us 2 based on its latest trailer. Get your gas masks ready, we’re about to dive in. 1. We finally have a release date

You read that right. Years since the original announcement, we now finally have a concrete release date for The Last of Us 2. It will be coming exclusively to PS4 on February 21, 2020, landing in the midst of a period absolutely crammed with blockbusters. Given it’s Naughty Dog, we’re sure it will do just fine.

2. Ellie is seeking revenge for a good reason

We’ve known for a while that The Last of Us 2 would focus on Ellie as she embarks on a tale of revenge, seeking closure over a devastating loss of a loved one. For a while, we’ve known nothing about the reasoning behind this. That is, until now. The latest trailer appears to reveal that Ellie’s significant other, Dina, is killed by a deadly cult known as The Seraphites.

Dina’s death is never shown on screen, so Naughty Dog is purposely trying to tease players with a misleading story beat. It would be a shame to see a queer character killed off to further plot development, a common trope which I’m a bit tired of seeing, especially since The Last of Us has already pulled this trick with Ellie’s character in Left Behind.

However, the world of The Last of Us is fiercely brutal and doesn’t show mercy for anyone, but deep in my heart I hope the overall narrative is far less predictable than this trailer presents. Chances are, it will definitely have a handful of surprises in store. 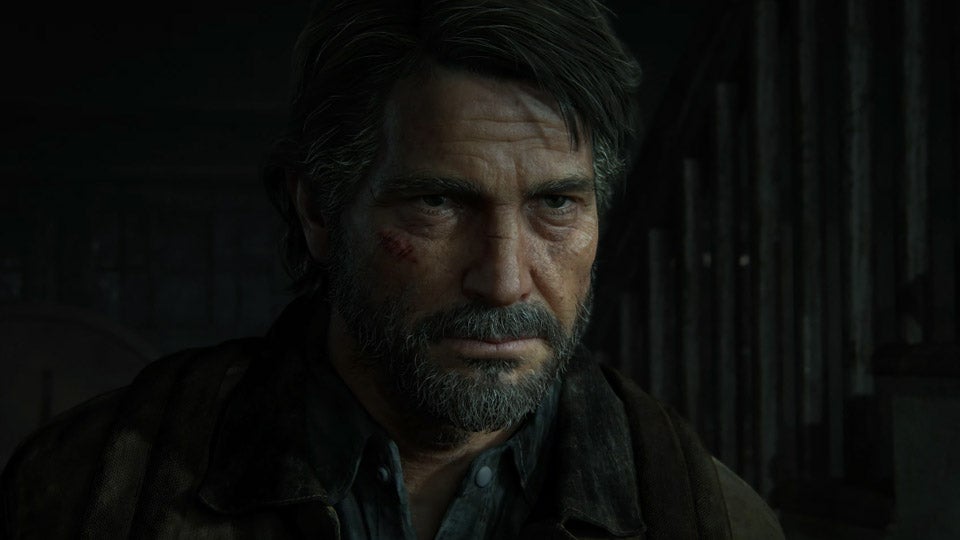 3. Seasons will seemingly make a return

The Last of Us did a stellar job of separating its major narrative moments with the use of seasons, cutting to black after shocking plot revelations. We were often left stunned or speechless by what just happened, solemnly transitioning into the future. It was excellent, and judging by this trailer, the sequel might follow a similar blueprint.

While we’re going off our own speculation, it seems the sequel will begin in the winter months before moving throughout the year, with changing weather providing a decent idea of which events are taking place where. We’re not ready if the climax of each season is set to be an emotional gut-punch.

4. The infected are more terrifying than ever

Humans have been the core focus in The Last of Us 2 trailers thus far, with Ellie cutting through murderous souls like butter will all manner of firearms, tools and unwieldly objects. However, Naughty Dog is keen you don’t forget what drove its vision of society into disarray to begin with. The Infected are back with a vengeance, and the years have been anything but kind to them.

During the new trailer, whilst on a routine expedition with Dina, Ellie falls into an abandoned building filled with infected, their ominous clicking echoing through the building giving us the willies within seconds. The Cordyceps Fungus now dominates the afflicted, providing them with hard, armour-like skin that will likely make stealth an essential tactic for survival. 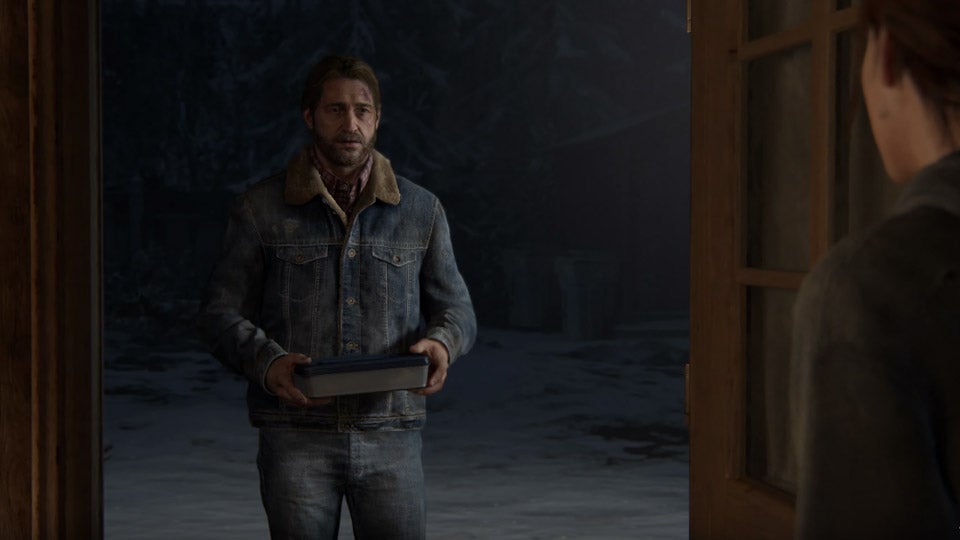 Naughty Dog is treating The Last of Us 2 as the second chapter in a single story, hence the ‘Part 2’ subtitle being applied across all marketing. The original was a tale of doing absolutely anything to save the ones you love, while this entry is themed around hate, vengeance and the animalistic urge to avenge those you love who are taken from you. Ellie is on an irrational spiral of hatred, so she’ll need loved ones to keep her from the brink.

Luckily, there’s plenty of familiar faces around to keep her company. Tommy, Joel’s older sibling, lives in the same settlement and appears to play a major part in the duo’s lives, warning Ellie of how dangerous her mission of revenge is and the toll it might have on those around her. She doesn’t listen, stubbornly shoving a gun into her backpack and leaving Jackson County behind. Here’s hoping the sequel will feature the return of Bill and other beloved characters. Although, we’d be more than happy for new ones to take the limelight instead. 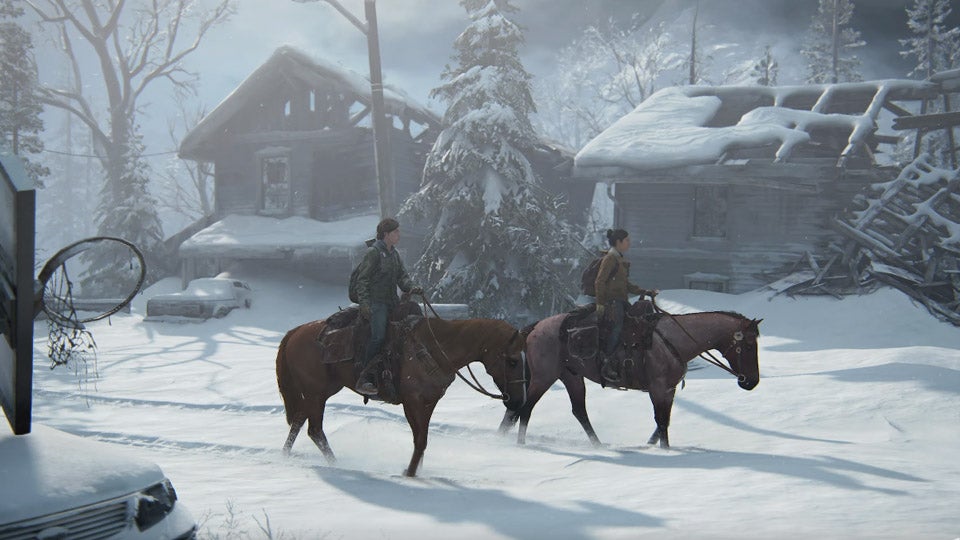 Uncharted 4: A Thief’s End and Lost Legacy marked a new level of ambition for Naughty Dog. Previously linear adventures evolved into something more, spliced with semi open-world sections which provided players with ample choice on how to approach encounters. Players were given a vehicle and set free, engaging in optional conversations and missions to their heart’s content.

Obviously, the joyous banter of those Indiana Jones-esque capers will be absent in The Last of Us 2. Although, the environments featured in the trailer look absolutely massive. The community Ellie calls home is filled with people, storefronts and homes, while the mountains that await just outside are awash with snow and dangerous trails you’ll venture down in the opening hours.

Colossal skyscrapers previously bustling with businesses have been reclaimed by nature as Ellie cautiously trots pass them on horseback, many of which will no doubt be explorable and filled with lore-drenched collectibles. This trailer simply oozes potential, especially when viewed in the context of Naughty Dog’s recent efforts. The more I say, the more I’m desperate to play it. 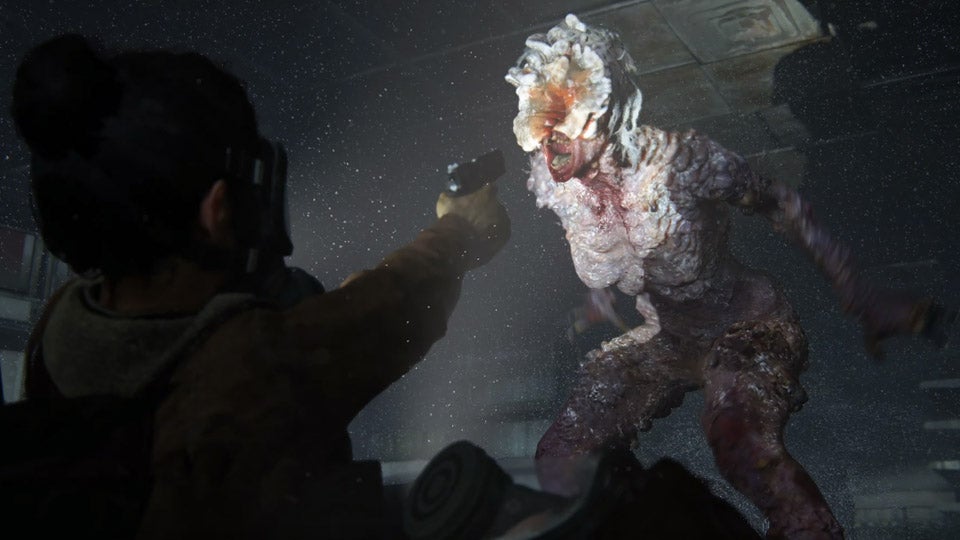 Seriously, The Last of Us 2 is not for the faint-hearted. Even compared to the original, this upcoming sequel is drenched in grizzly, realistic violence that is genuinely unsettling to watch unfold. Ellie is fueled by hate, her feelings translating into knives, axes, arrows and bullets driving into the bodies of her enemies. She’s close to losing her humanity, an element we’re hoping is explored further once Joel comes into the picture.

“You’d think I’d let you do this on your own?” Joel’s words at the trailer’s conclusion gave us goosebumps, showing his dedication to Ellie and the past mistakes he has a right to make up for. He’s raised this young woman, shaping her view on the world and how she views those within it. Knowing this, he’ll arguably have to face the consequences of his actions, as his lies in the first game have had huge ramifications on Ellie as a character.

This tale is going to be a heartful, violent outing that’s drenched in blood, leaving crimson footsteps in its wake. Naughty Dog are masters of the craft, and if this recent trailer is any indication, it’s got another classic on its hands.