You can’t go into Uncharted: The Lost Legacy without pondering a few hard questions. Has Naughty Dog’s series had its day? Can it shine without Nathan Drake? Without Sully and Elena? Can a game conceived as DLC for Uncharted 4 stand on its own two feet? In spin-off terms, are we going from Breaking Bad to Better Call Saul, or from Friends into the horrors of Joey?

Within its first few hours, The Lost Legacy won’t leave you in any kind of doubt. While it doesn’t do anything you haven’t seen in an Uncharted game before – though you won’t have seen it done quite like this – it manages to craft an enthralling adventure while transforming secondary characters into likable protagonists. And while it doesn’t have the length of a full-scale Uncharted, The Lost Legacy has the same epic spectacle and heart. Provided you love Uncharted – and you really should – it’s inconceivable that you won’t love this triumphant lap of honour.

Here your lead is Chloe Fraser – the roguish treasure hunter introduced in Uncharted 2 – on the trail of a Hindu relic concealed deep within India’s Western Ghats. Your co-star is Uncharted 4 villain, Nadine Ross, no longer in charge of mercenary outfit, Shoreline, and joining Fraser in the hope of a quick buck. One of The Lost Legacy’s great successes is the way that it goes deep into what makes these two women tick, so that you come to understand what drives them and even empathise with Nadine – not easy if (like me) you spent most of Uncharted 4 wanting her dead. 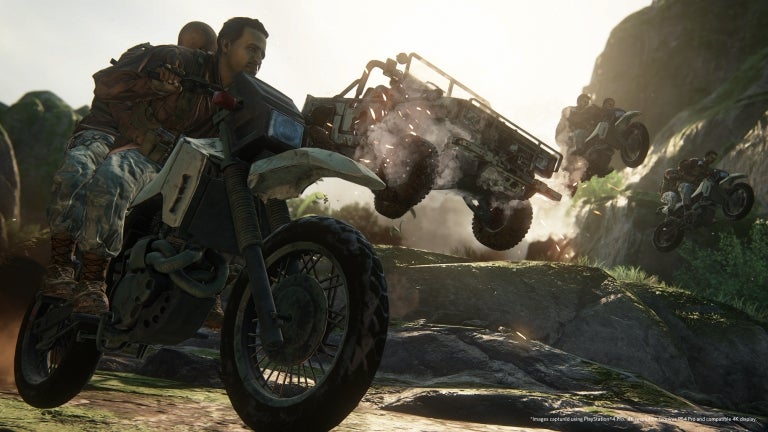 Don’t worry about the change of cast; if you played Uncharted 4 the core experience will still be very familiar. You explore exotic locales, clamber around crumbling ruins and solve a range of clever puzzles, while Fraser and Ross trade banter almost constantly. You’re not the only ones after the relic, though, so you’ll also be facing off against the soldiers of a psychopathic Indian warlord, sometimes sneaking through the ruins and vegetation to take them out one-by-one by surprise, sometimes getting stuck into some serious gun battles with legions of the goons.

By now Naughty Dog has polished all these mechanics to a T. Take the traversal. Clear but subtle markers distinguish where you can grab onto the scenery or climb, while Chloe has the same little telling gestures as Nathan did, to let you know when you can jump to the next handhold or leap from a swinging rope. The third-person, cover-based combat is tight and exciting, pushing you to use the scenery, think tactically about the situation and use stealth to thin down the numbers whenever you can. Sneaking up and choking troops or grabbing them from below and over the precipice never gets old.

Meanwhile, the first third of the game turns Uncharted 4’s flirtation with open-world action into a full-blown affair, giving you a sizable area of rivers, ruins, mountains and mud-filled valleys to roam about in your Jeep, exploring its ancient temples and flooded catacombs in roughly any order that you wish. There are secondary treasures to find and collect, mysteries to solve and enemy squads to bring down, with caches of special weapons to unlock as your reward. And did we mention monkeys? Yep, this might be the most primate-rich Uncharted yet. 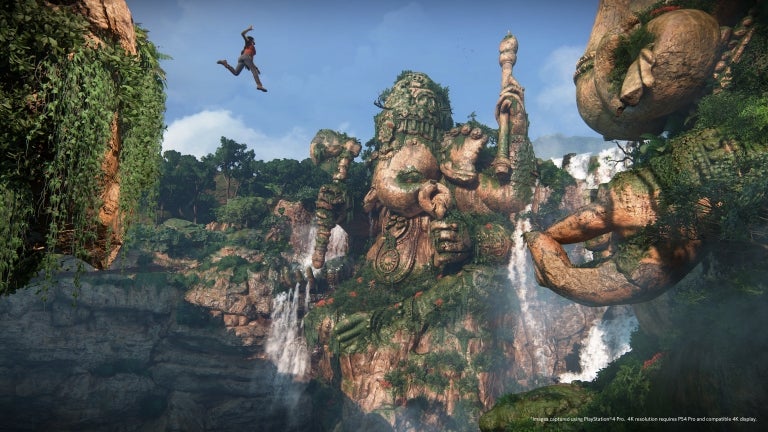 It’s within this first third that you’ll be struck by Lost Legacy’s sheer beauty. You might think that you’ve seen jungles, intricately carved stonework and exotic vegetation before, but you haven’t seen them rendered or lit quite as gorgeously as this. The swirling rapids, clear pools and waterfalls are things of wonder, the temple interiors growing ever more spectacular as you play. The attention to detail in the characters is frequently astounding, from the dirt and scratches they pick up while in action to the way water affects their clothing and their hair. Play it in 4K with HDR on a suitable TV, and The Lost Legacy is one of those games that makes your PS4 Pro and HDR TV investment seem utterly worthwhile.

It’s a huge amount of fun, too, as you slip and slide around the often muddy roads and vertiginous mountain trails in your jeep, dealing with some varmints here, some puzzles there, stopping every now and then to enjoy the view – it turns out that Chloe is a big fan of her smartphone photos. It’s not that The Lost Legacy does anything hugely new or innovative, but it’s superbly paced and the puzzles are intriguing without reaching Witness levels of challenge. And where it echoes previous Uncharteds – lethal statues, jungle shootouts, terrifying climbs and narrow scrapes all figure large – it always finds a way  to give them a slightly different or more spectacular spin. If Chloe’s sometimes covering Nathan Drake’s greatest hits, she’s doing them in her own style.

The latter two thirds of the game are a little more urgent. The action picks up pace and the environments grow more linear as you come closer to what you want – and what you fear. The payoff comes, though, in exactly the kind of amazing set-pieces we come to Uncharted for, including some of the series’ best massive-scale temple puzzles, some epic battles, dazzling action scenes and a chase sequence that leaves Uncharted 4’s efforts in the dust. 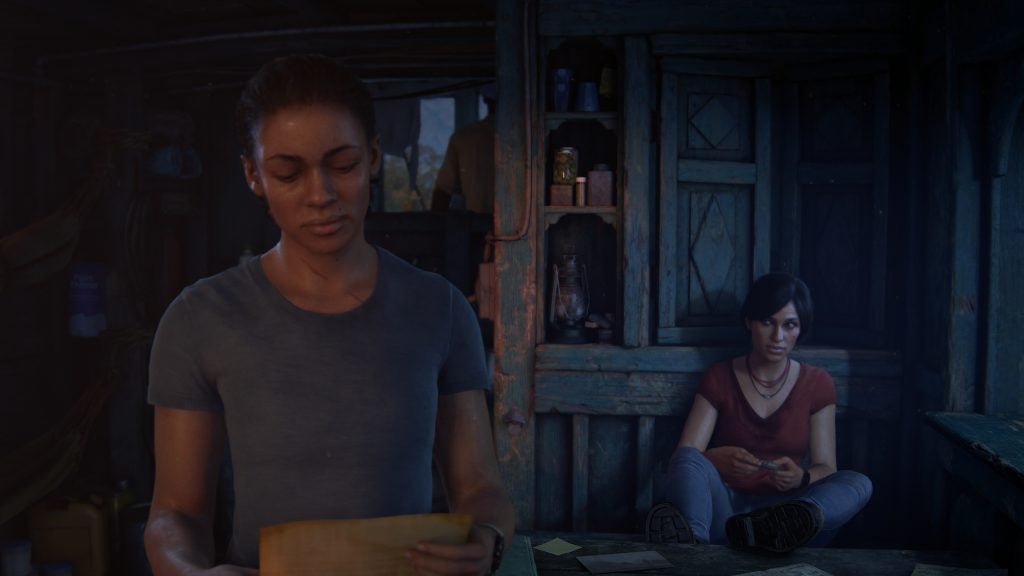 If this is Naughty Dog’s last Uncharted – and it leaves its options open – then The Lost Legacy is going out on a high. Over the course of a little over 10 hours of play it had me laughing, smiling, furious, exhilarated, tense, thrilled, relieved and moved. In short, it gave me everything I want and expect from an Uncharted game, and maybe more.

I won’t be the first to say that Uncharted 4’s multiplayer modes are under-rated – and I’ll admit to forgetting about them often enough myself. They do a fantastic job of combining solid maps and inventive game modes with the slick cover-based combat and traversal of the single-player campaign, and if you’re in the mood for something with a little more swashbuckling attitude than your average online FPS, you’ll have a great time.

The Lost Legacy throws in access to all existing multiplayer content, plus a new Survival Arena mode, which takes the existing Horde-like co-op mode and turns it into a constantly transforming playlist where enemies, weapons, conditions and objectives switch with every wave. One wave you could be defending an area from a rush of troops who drop armed grenades every time they die, the next you could be tracking down marked targets who happen to be flaming, teleporting, bastard-hard djinn.

In a nice touch, Naughty Dog has made this new mode plus new Lost Legacy characters and skins available to players of Uncharted 4 as well. Do yourself a favour: find some friends and get stuck in. 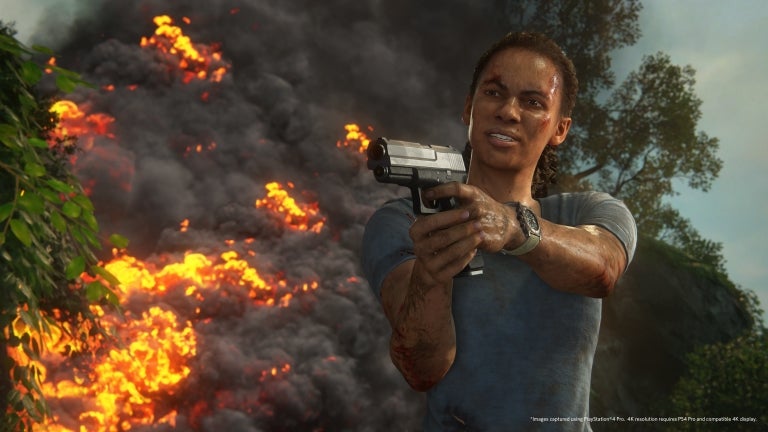 It might be shorter – as reflected in the price – but The Lost Legacy is a great Uncharted and a dazzling example of a studio at the top of its game. To be honest, I wouldn’t have believed that Chloe and Nadine could make such fantastic, sympathetic protagonists or that Naughty Dog could stretch the formula out for another 10 hours, yet it has and I loved every minute.

To my mind, this isn’t merely one of the best games of the summer, but one of the season’s best blockbusters in any media. If Naughty Dog wants to leave the series here, it’s hard to grumble, but let’s hope it doesn’t. Right now, more Uncharted seems like anything but a bad idea.