When Amazon first launched the Echo smart speaker in 2014, it was easy to work out which one to buy. Not any more.

Today, the product range has ballooned, including everything from small and cheap devices up to smart speakers with built-in screens. In addition, there are even some third-party devices that have Amazon’s Alexa smart assistant built-in. It’s bewildering, to be honest.

On the other hand, the breadth of the range means that you’re very likely to find a smart speaker to match your needs perfectly. Conversely, whittling down your options has become more complicated.

We’ve now updated this guide to cover the most recently released Echo speakers. Don’t forget that any of these devices can be paired with the fun new Amazon Echo Wall Clock, too. 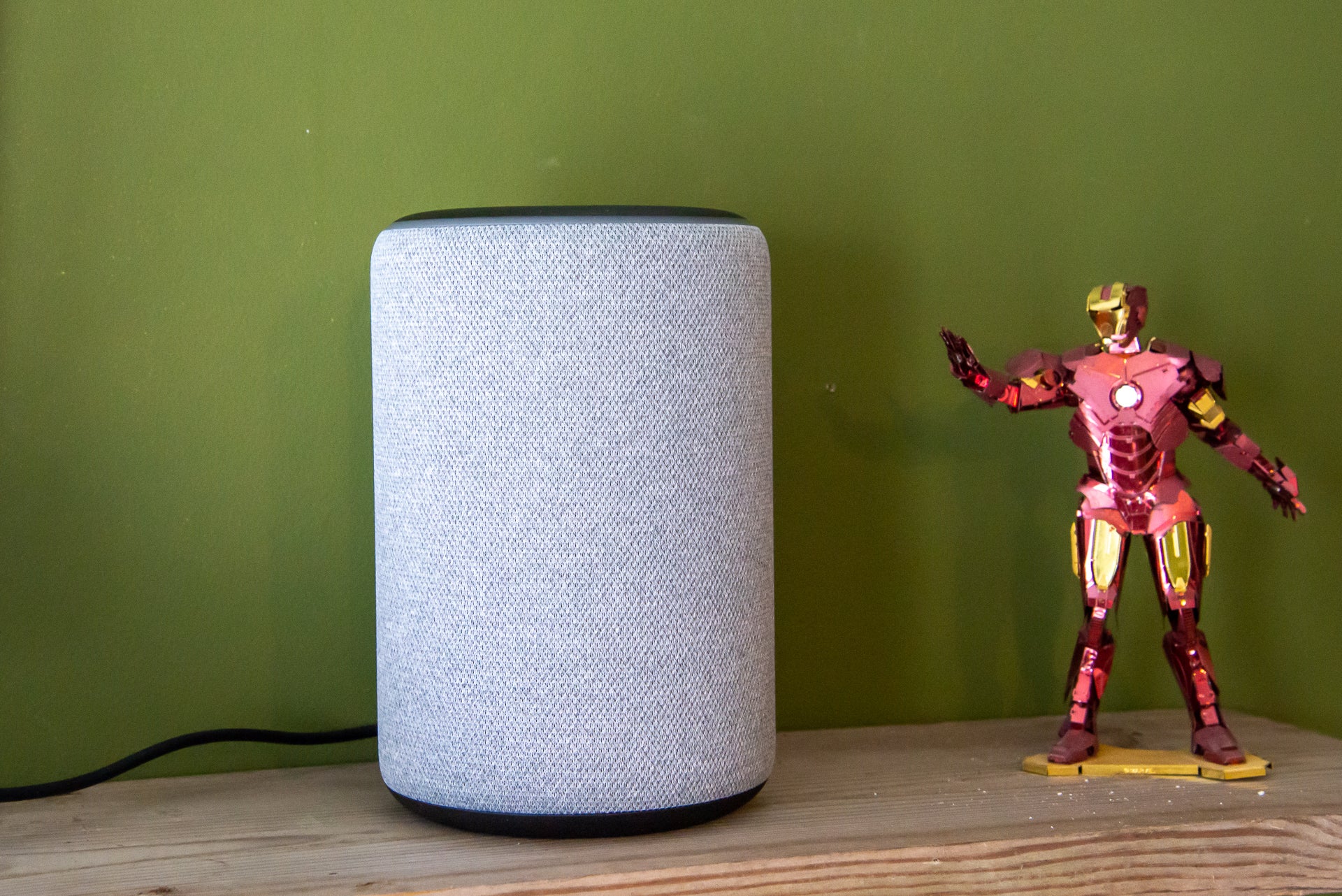 While the first Echo kickstarted the smart speaker market, it was rather basic. The 2nd generation Echo fixed the looks but wasn’t the best-sounding. Now, with the Amazon Echo 3rd Gen we have the best all-round Alexa speaker.

Effectively, an Echo Plus but without the Zigbee Hub, the Echo delivers some impressive mid-range sound that beats most Bluetooth speakers. If you want better audio quality, you can pair two of these speakers together and add in the Amazon Echo SUB, giving you a powerful mid-range audio system.

Related: How to add an Amazon Echo Sub and configure Alexa EQ settings

Impressively, this speaker costs the same as the old version, at £89.99. Thanks to the audio improvements, this is now the best overall Echo speaker. For most people, the Echo Plus won’t get used to its full ability, so this is the better choice. 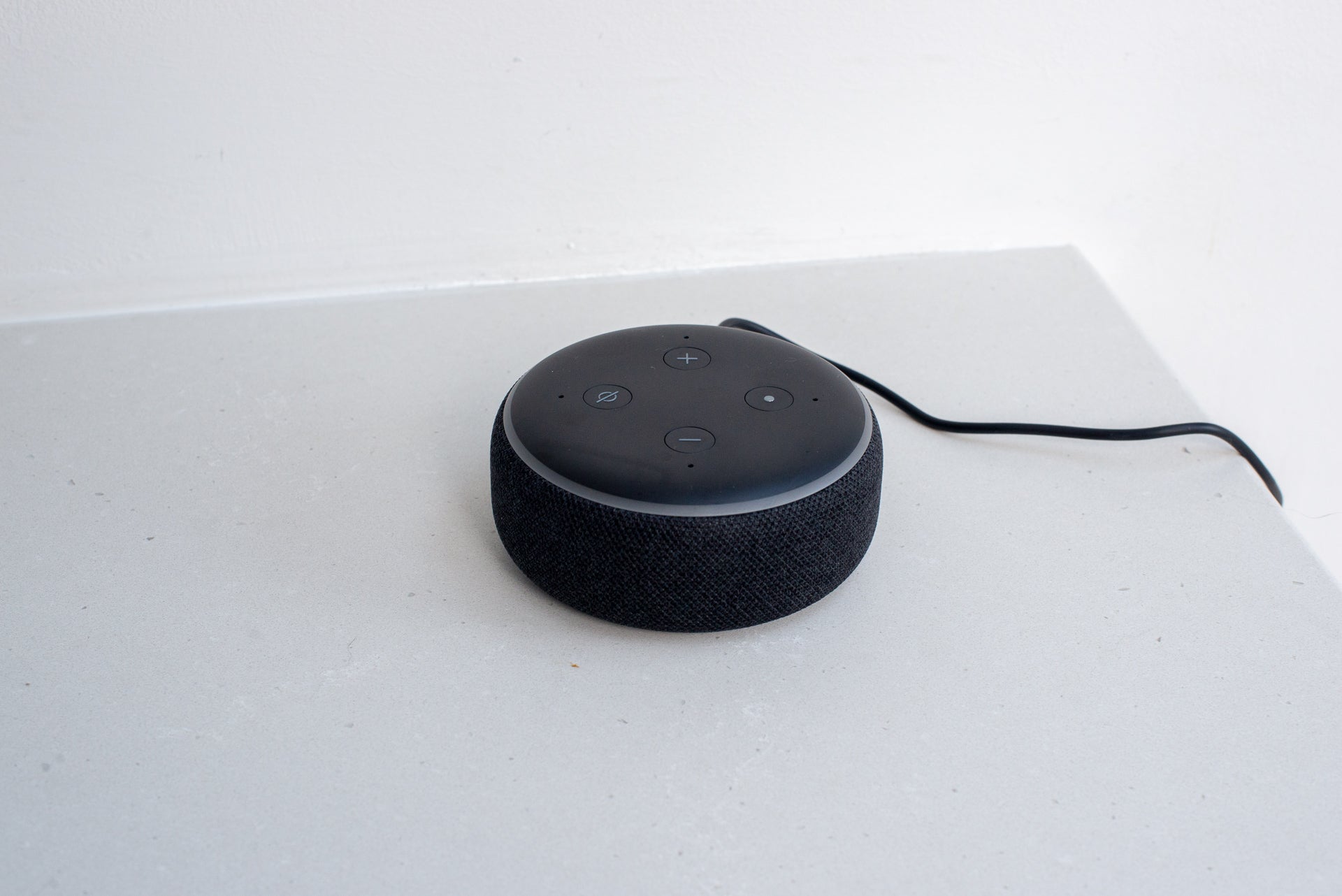 The Amazon Echo Dot (3rd Gen) is a big improvement over the original Dot (featured below). It’s nicer to look at and has upgraded audio that makes it easier to understand. And, you can even use the new Echo Dot for a bit of music or, more realistically, listening to radio.

This model still has the 3.5mm audio output and Bluetooth option, so you can connect it to a more powerful stereo. That feels like a slight waste of its capabilities, and if you want something to hook up to an existing stereo, the older Echo Dot is a cheaper option.

For use around your home, the new Echo Dot is a far better product than the older model, and its clearer audio improves the entire Alexa experience. Even better, it’s the same price as the old model at £49.99.

3. For the bedside table – Amazon Echo Dot with Clock 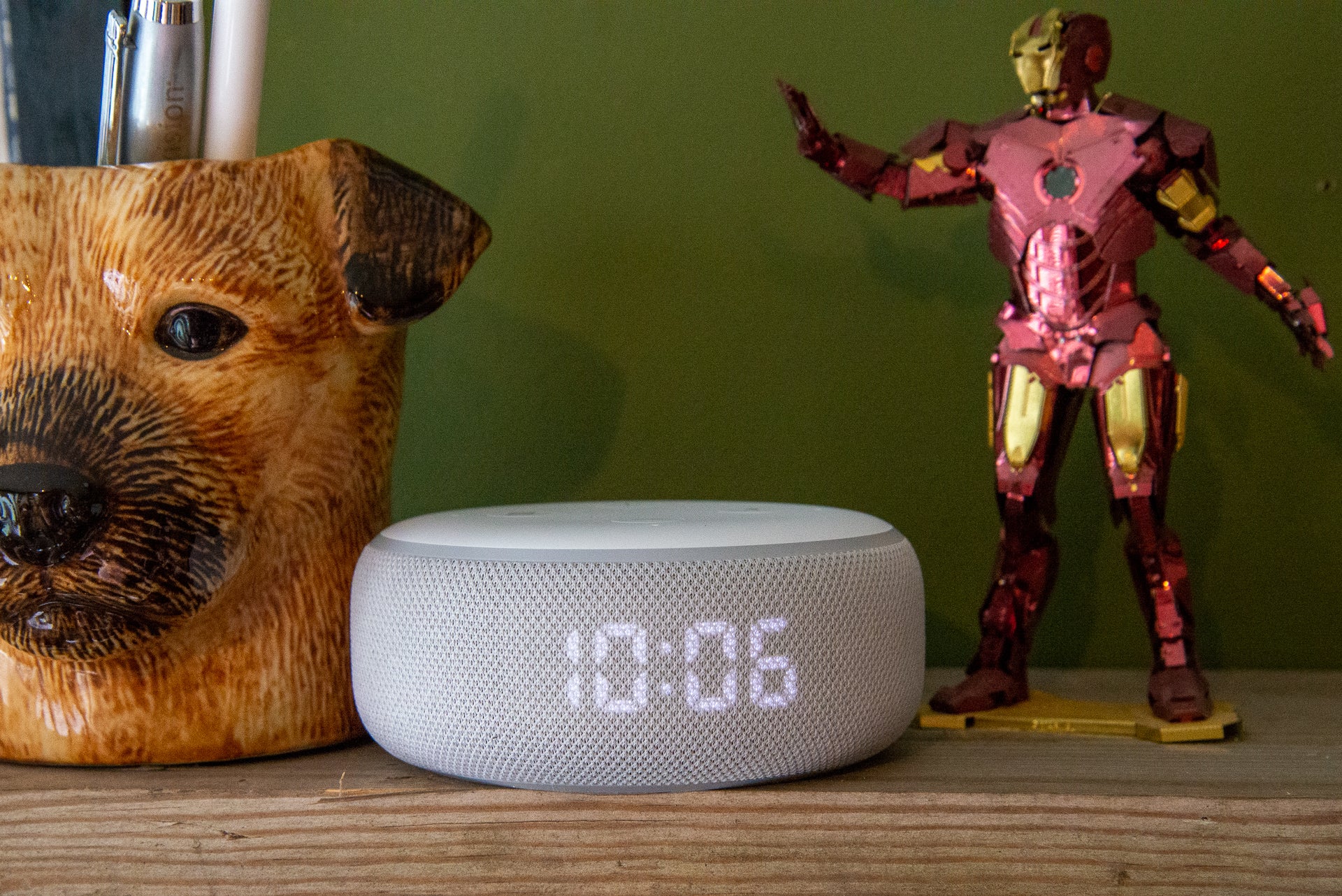 In a case of the name telling you everything, the Amazon Echo Dot with Clock is the perfect bedside clock. Giving you all of the features of the Echo Dot 3rd Gen, this model also has a screen that shows you the current time, if an alarm’s set, the outside weather when you ask, and the current timer.

For those that don’t want a screen-enabled device, the Echo Dot with Clock is the perfect compromise. The main downside is that it’s only available in the one colour, which is a touch disappointing. If you don’t want the clock, this model isn’t worth the £10 premium; if you do, then it’s a great addition to the Echo range and your home.

4. For use with an existing stereo – Amazon Echo Input 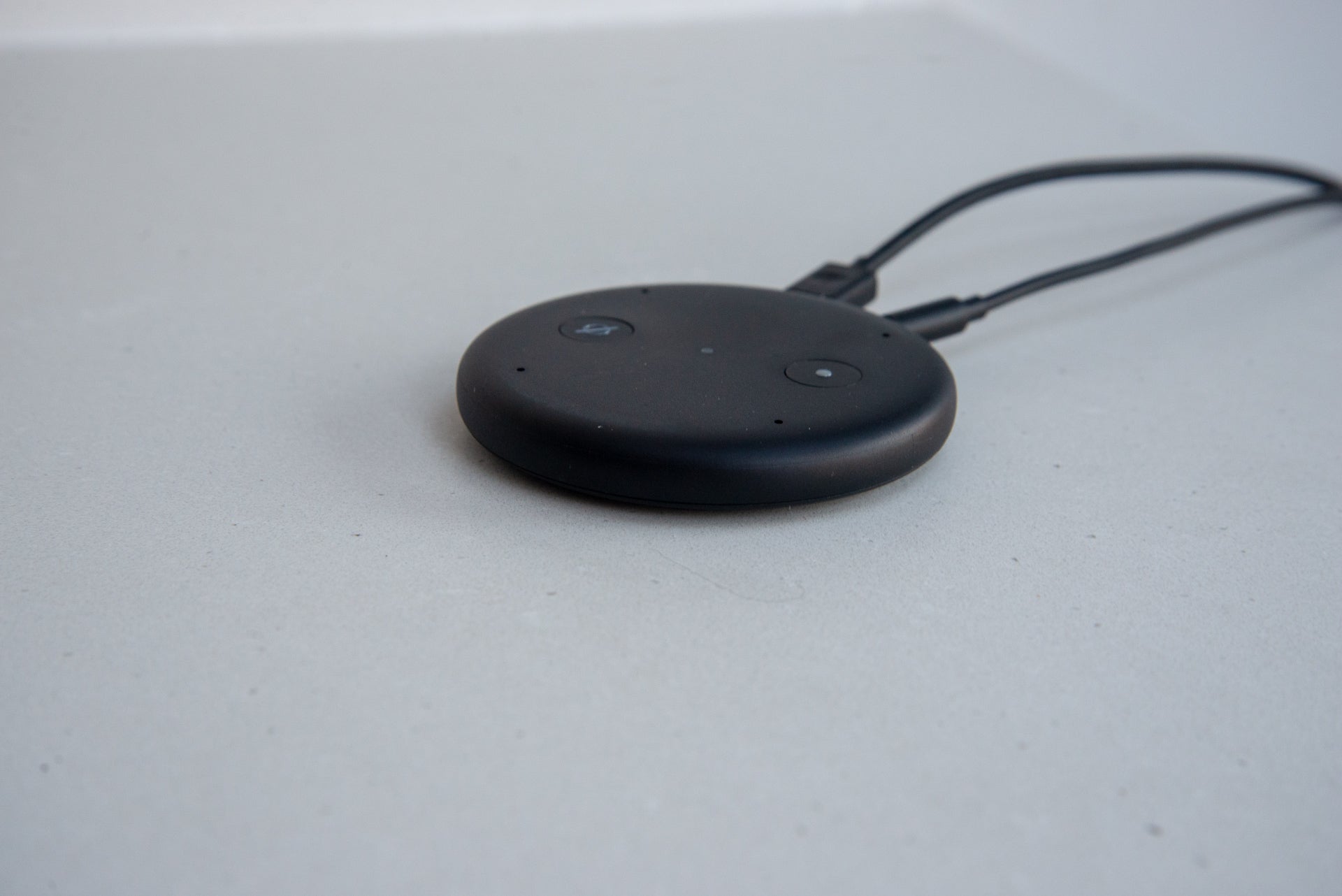 If you think that the Amazon Echo Input looks like an Echo Dot with the speaker part cut off, you’re pretty much right. Designed to be plugged into an existing speaker, the lack of a speaker cuts the cost down and makes this the cheapest Echo device. You can connect to a speaker using a 3.5mm input or Bluetooth, although if you use the latter the drop-in and call features are disabled, which is a little annoying.

The Echo Dot (3rd Gen) is the more flexible option, but if you definitely want a device to connect to an existing speaker, the Amazon Echo Input is the model for you. With a larger 10.1-inch screen, the new Echo Show (2nd Gen) is the perfect Alexa device for when you want to enjoy video as well as sound. With the ability to play Amazon Prime Video content, the Echo Show makes a decent second screen option for catching up on shows. Video quality from the 1080p screen is excellent, too.

For audio, the Echo Show has some of the best internals, producing loud and vibrant audio. This is one Echo speaker where you won’t want to upgrade to a larger set of speakers.

The Echo Show also gives the best overall Alexa experience, showing you information on screen as well as by voice. This makes it easier to understand more complicate questions, such as the details of a calendar appointment, and you also get additional features, such as recipes. Amazon has added in smart home control from the touchscreen, so you can toggle devices on or off without having to use your voice. A Zigbee hub and improved app mean you can even control devices directly, such as Philips Hue bulbs, without extra hubs.

This is an expensive product at £219.99, but it’s the one that shows off Alexa to its full capabilities. 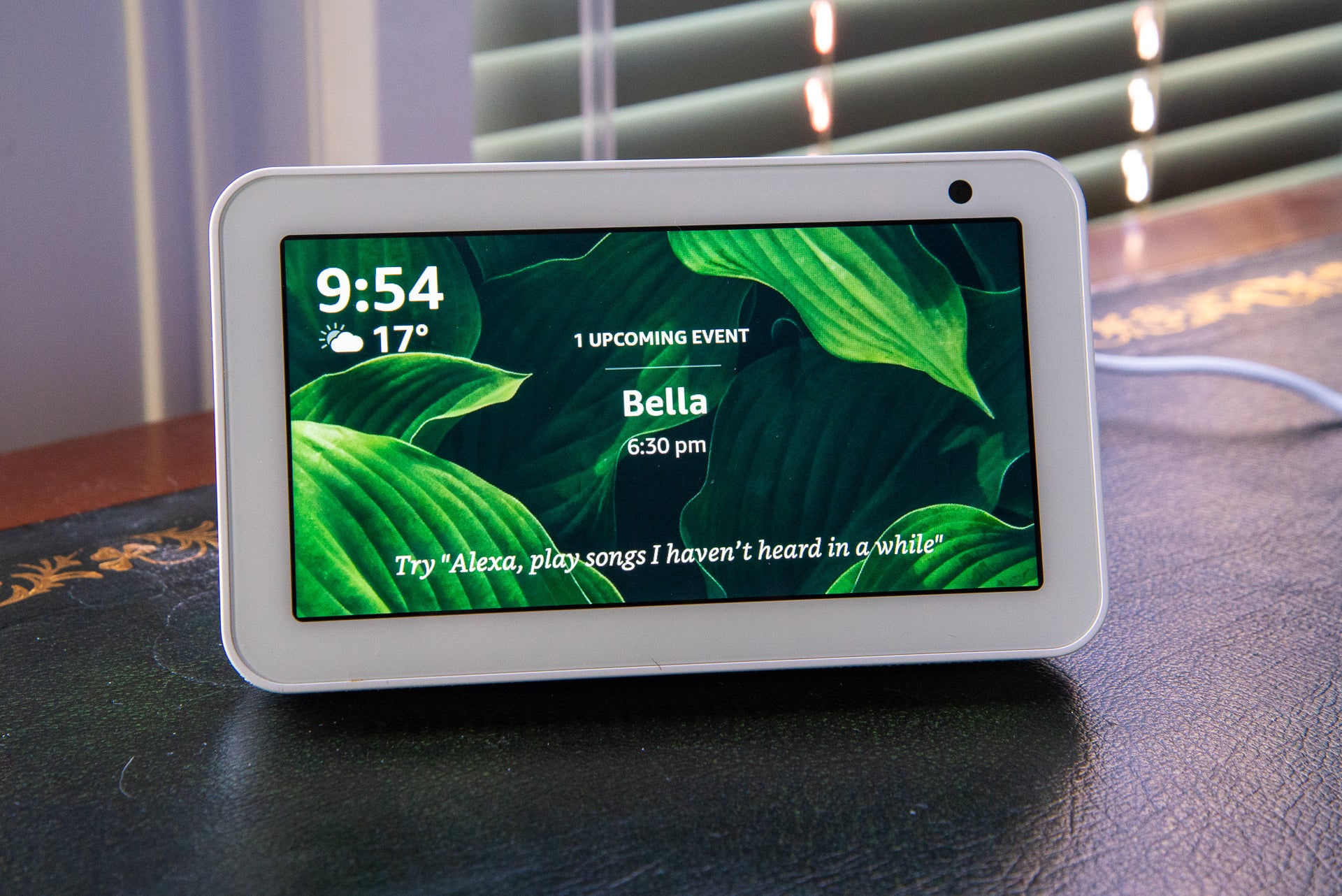 The Amazon Echo Spot  was the original bedroom smart display:  a smaller, more attractive Echo Show with a round display. The issue is that model is quite expensive, so the Amazon Echo Show 5, is a better option for many.

With its traditional shape, the 5.5-inch 960×480 display makes the Echo Show 5 small enough to sit on a bedside table, acting as an alarm clock, or even as a kitchen companion where space might be tight. This model offers everything that its big brother offers, including a display that shows you upcoming appointments and news headlines, and that can also show more detailed information when you ask a question.

You can also control devices directly from the device, with recently-controlled smart home devices appearing at the top of the screen. Certainly, if you want to quietly control something at night, this interface makes that job a lot easier.

You can play video on the display from Amazon Prime, although the smaller screen here means that you don’t get quite the same experience as on the bigger Amazon Echo Show.

At night, the Echo Show 5 can automatically dim its light, so you’re not kept awake by a bright screen. Add to this excellent voice or video calling and it’s hard not to love this device.

Decent volume, a kick of bass and plenty of presence means that the Echo Show delivers voice responses and radio brilliantly. For music, there’s a slightly muddled mid-range and the Show 5 lacks a bit of excitement and punch, but it’s more than good enough for listening to any track. The Echo Show 5 is excellent value and makes the Echo Spot rather redundant unless the neater looks of the older product particularly appeal. 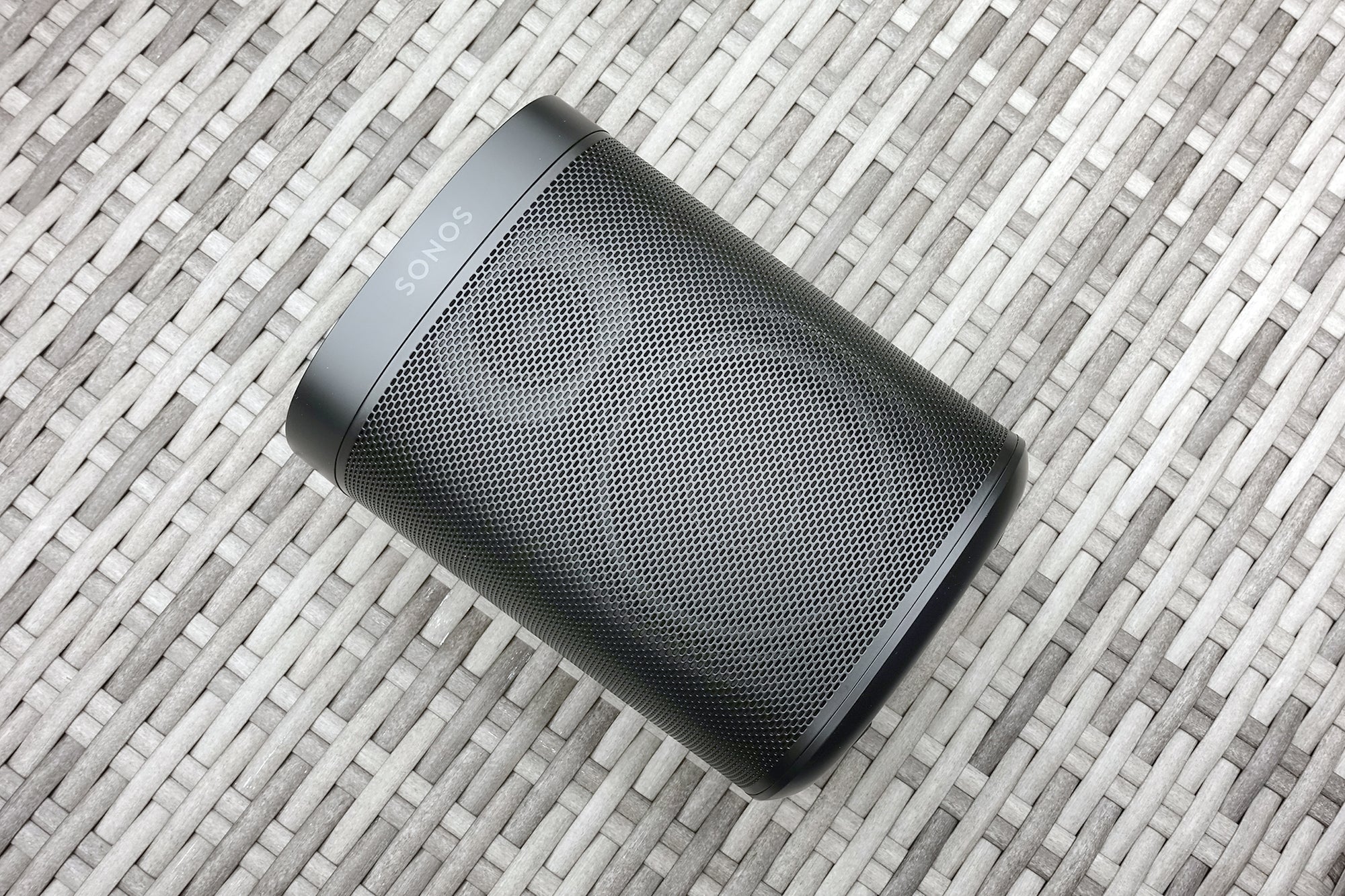 Sonos is the best multi-room audio system; Alexa is the best smart assistant. Wouldn’t it be great if the two could work together? Well, luckily, that’s just what you get with the Sonos One.

Effectively, a Sonos Play:1 speaker with Alexa built-in is a match made in silicon heaven. This weighty speaker is small enough to fit anywhere in your home but delivers sound that blows all other smart speakers out of the water. And just as with the Play:1, you can pair two Sonos Ones together, or add a sub to boost audio fidelity further.

Alexa integration is excellent, with the Sonos One responding just as any other dedicated Echo devices. As well as controlling music playback through this device, you can control any other Sonos speakers in your home using the Alexa Skill.

Google Assistant support was introduced in 2019 too, which arguably made the Sonos One the best smart speaker overall as it lets you choose the assistant you want to use.

If you already have a full house of Sonos kit, go for the Echo Dot and use that for voice control instead.

8. If you really need the cheapest smart home hub – The Amazon Echo Plus (2nd Gen) While the original Amazon Echo Plus felt like a bit of an odd product, with its smart home hub not giving the level of control we’d expect, the new model is an improvement. Now, with the Amazon Echo Plus (2nd Gen) you get a better overall experience.

First, the speaker has been redesigned and looks far nicer. The Echo Show has the Zigbee hub that the old product had, but this time around the app has been improved, giving more control over things such as Philips Hue bulbs. There’s even a temperature sensor built in that you can use to control Amazon Alexa routines, with.

However, Alexa Routines have improved so much that they can now use sensors that aren’t directly connected to the device, such as a Ring Alarm’s motion sensor. As such, there’s less need for a device such as this and most people will struggle to find a use for the smart home hub.

The Echo Plus was the best-sounding Echo speaker, but the new Echo 3rd Gen now has the same internals and it’s a lot cheaper, too. For those that just want better audio buy the Echo instead. This model’s now only really of interest to people that really want the Zigbee hub.