Amazon Music HD offers a strong proposition at a good price, which will be tempting enough for many to get on board – particularly Prime Members. However, the competition still pips it for absolute sound quality and music discovery

There is also a growing catalogue of songs mastered in Dolby Atmos and Sony’s 360 Reality Audio codec, which you can get the full effect from using Amazon’s Echo Studio speaker.

The best part is the price. It only costs £14.99 per month or £12.99 per month for Prime subscribers – the cheapest high-res service you can find.

Amazon Music HD interface — Functional and easy to use

Spotify, by comparison, surfaces less albums and playlists in its rows of content (four instead of six), but the cover art is larger, designs are more varied and it’s more interesting to look at. Thankfully the smartphone app is more on par with the competition, due to a more striking purple background and larger artwork that makes it more engaging.

Ultimately, it’s usability that really matters, and you won’t struggle to find your way around. On the homepage, there are clearly marked sections that pick out featured albums and playlists, suggested content based on your previous listening choices and contextual playlists that might be of interest.

If the homepage doesn’t pick out any content that you’re interested in, you can browse through playlists, new releases, charts and “stations”, which are generally genre, era or mood based. There’s also a section for “My Music” which includes any music you’ve bought through Amazon, plus on the desktop app there’s a link to the Store for buying more. Exclusive to the smartphone app, Alexa is integrated for voice commands.

It’s worth noting there are no actual radio stations available in Amazon Music HD, nor any podcasts – Spotify or Deezer are better for that if they’re important to you. What Amazon does do brilliantly though, that others don’t do as well, is it highlights what quality the track is that you’re playing, what quality you’re actually hearing it at and what your current device is capable of. It’s really transparent and ensures you know you’re getting what you’re paying for.

This is all available by clicking the quality tag that’s on every song (labelled Ultra HD for high-res and HD for CD quality). If you notice you aren’t getting what’s expected be sure to check your settings to ensure they’re not capping your playback.

Finally, the now playing bar along the bottom has all the playback controls you could want, including the ability to throw your music to a connected Echo speaker. You can also expand to see full album artwork, and lyrics are available on most tracks if you fancy a bit of DIY karaoke.

While streaming services started out as places to stream our favourite artists, they now often form an important part of our music discovery too, with the very best surfacing artists and albums in genres we enjoy that we might not have heard about.

Amazon offers up suggested albums based on what you’ve listened to before and also has a playlist called “My Discovery Mix”, which is updated every Monday. The latter didn’t throw up many surprises, with top-charting songs from Justin Timberlake, Gwen Stefani and Flo Rida included – far from obscure artists. They weren’t even songs I would really listen to as a hip hop and R’n’B fan, but that’s something you’d hope would improve the more information the algorithm gets. 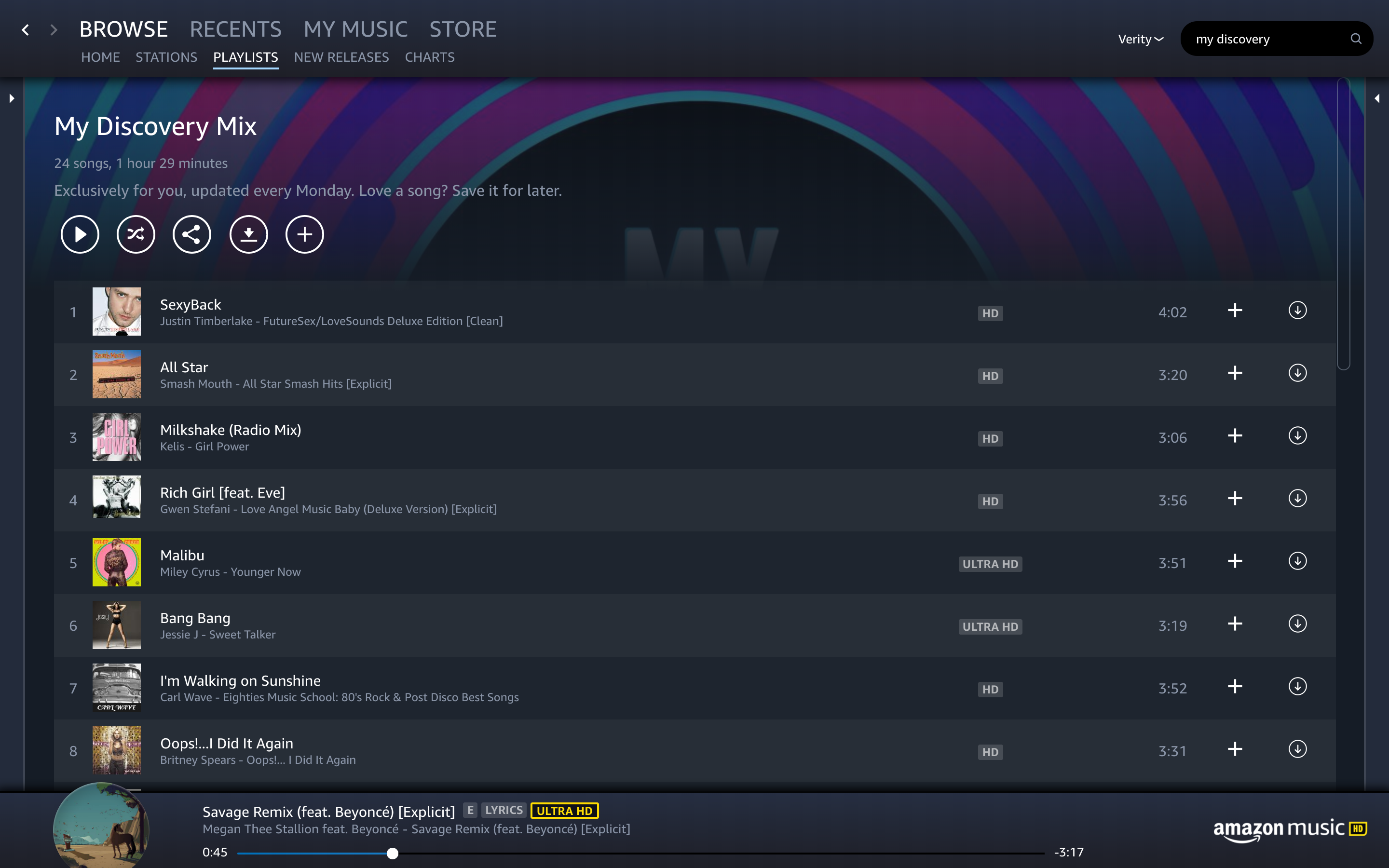 Thankfully the albums chosen for me were better. Mostly they were artists I was familiar with, but albums I perhaps hadn’t heard all the way through or wouldn’t have thought to look for. Not bad then, but Spotify still remains the gold standard for music discovery.

Standard playlists are pretty well curated. Amazon doesn’t say whether it uses algorithms to create them or if has people at the helm, but either way, there are sound inclusions across the board. Whether listening to a “Chill Summer Rap” playlist or one aimed at “Working From Home”, I found there to be very few issues with song selection, and there was usually very little reason to skip. In terms of content unique to Amazon, there were around 50 “Guest Curator” playlists from various female artists, as part of a push around International Women’s Day, and a “Side by Side” feature, which sees artists talking about their albums and giving some background on each track.

It’s something but it isn’t going to sway a subscriber to choose Amazon over the competition. Spotify and Tidal offer more by way of exclusive content to tempt users to their platform – but then Amazon has pricing on its side…

Amazon Music HD costs £12.99 per month for Amazon Prime subscribers and £14.99 for anyone else. That is just a £5 premium on Amazon’s standard Music Unlimited service (£7.99/£9.99 per month) and, Prime subscriber or not, makes it the cheapest high-resolution service currently available.

By comparison, Tidal costs £19.99 per month, while Deezer‘s HiFi service matches Amazon’s standard price of £14.99, but is CD quality only. With over 60 million songs, I had no issues finding any track I searched for, and also found plenty of tracks available in Ultra HD across genres. It’s also particularly well surfaced compared to some of its competitors, and there were tracks I found in high-res on Amazon that I only found in CD quality elsewhere.

There are also over a thousand tracks available in Sony’s 360 Reality Audio and Dolby Atmos, which aim to give you a more engaging three-dimensional experience in place of a traditional stereo one. How effective that is has proved a bit of a mixed bag at the moment, but they’re there for you to experience all the same.

Tracks mastered in Sony’s Reality Audio 360 format on Amazon Music HD are currently only available when listening via the Amazon Echo Studio, so you will need one to take advantage. Available tracks are tagged with a “3D” label within the smartphone app, and you can search for “3D” to find more – there are several regularly updated playlists so you can keep an eye on new tracks as they arrive.

If you play them on non-compatible equipment, the tracks will still play, but their 3D tag will disappear and it will revert back to either HD or UHD as your equipment allows. 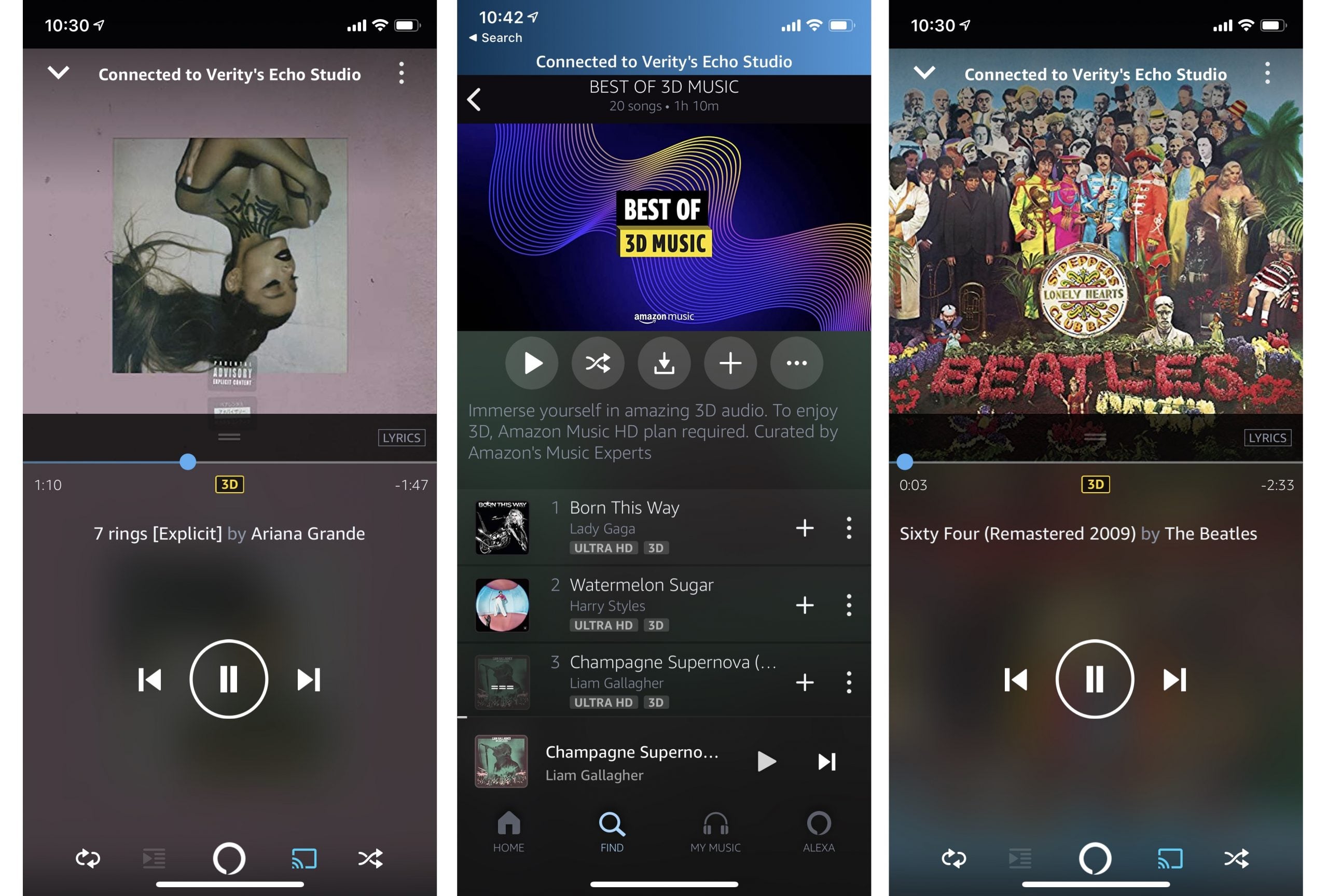 Amazon Music HD sound quality — Good, but better is out there (at a cost)

Tracks on Amazon Music HD sound great. There’s detail, punch and clarity across the board, though you will hear the benefits to the Ultra HD tracks with the right equipment. Certainly, compared with Apple Music’s standard 256kbps streams, there’s more dynamic nuance and expression here, even with just a MacBook and good headphones. Both are enjoyable to listen to, but Amazon’s tracks have a bit more verve and excitement that gives them the edge. Compared with a similarly spec’d Tidal though, Amazon falls a little short. Tidal tracks sound more full bodied, pick out more fine details and are overall more rhythmic, whether listening to a CD-quality version of Give It Away by the Red Hot Chilli Peppers or Savage Remix by Megan Thee Stallion.

The extra musicality offered by Tidal of course comes at a price, but it does make for a more engaging listening experience that the most critical listeners will appreciate – especially those listening on more transparent kit.

Amazon Music HD is available via the iOS, Android and desktop apps, plus it’s available on Echo devices, Sonos speakers and Fire TV.

It’s worth noting that the web player doesn’t support the improved sound quality of Amazon Music HD, and is capped at the standard 320kbps. Each device you listen on will have its own restrictions too, so Sonos and Echo devices will downsample any high-res streams to CD quality, for example.

If you have an Echo speaker, using Alexa to play music through it is easy and effective. Simply ask for a song, artist, or explain the mood you’re after and Amazon will pull something together appropriately. Amazon Music HD is a cost-effective way of dipping your toe into the higher quality streaming market, particularly if you are already a Prime member.

The catalogue of music on offer is superb. The surfacing of high-resolution content is strong too and overall the user experience is a good one, though music discovery could do with some work to bring it in line with the likes of Spotify and Apple Music.

Podcast and radio fans will want to look elsewhere, as at the time of review Amazon hadn’t dipped their toes into that format.

Critical listeners may find the musicality in playback lacking when compared with Tidal, but for many, the difference in price will be enough to tempt their hand. We doubt they’ll find themselves disappointed.