In both name and functionality: ‘a mouthful’. The ‘5363’ is an all singing, all dancing product that tries to jam just about everything you could want from a router into a single device. It combines a high speed cable modem and 802.11ac WiFi with Broadcom Turbo QAM compatibility for an ‘AC1900’ rating, currently the fastest wireless classification available. Zoom has also given it a great price. How could things possibly go wrong? 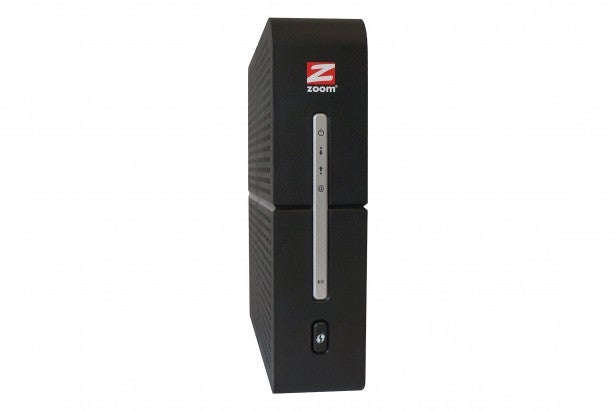 The first point to make is all these credentials are internal and the compromises you will immediately notice are external. We recognise tastes differ, but from a superficial perspective the 5363 is no looker and at 208 x 189 x 51 mm it is large and incredibly boxy.

Zoom does attempt to liven it up with a textured pattern which also acts as ventilation, but this only applies to one side and the right side is completely plain. The reason for this is the 5363 has wall mountable points here, very credible, but if your room layout means this side will be visible it shows off a product that simply looks unfinished.

Furthermore build quality is poor with flex in the joints, a WPS button that popped in on us when first pressed (and wouldn’t pop back out again) and LEDs which only show incoming and outgoing traffic, not which wireless bands are in use. We don’t expect miracles in router design, but physically the 5363 is disappointing.

So it is a good thing the 5363 wows us with its feature set. Firstly Zoom has pulled out all the stops with a DOCSIS 3.0 cable modem (not for use with DSL-based networks) capable of handling Internet speeds of up to 343Mbps. There’s plenty of future proofing there.

Secondly Zoom has gone for a full blooded AC1900 wireless ac configuration with 3×3 antennas that produce a theoretical bandwidth of 1300Mbit over 802.11ac and up to 600Mbps over 802.11n. The latter comes down to the aforementioned Broadcom Turbo QAM chipset which bolsters the legacy 802.11n 2.4GHz band. Zoom isn’t the first to do this – we have previously seen it in the Linksys EA6900 and WTAAC1900, Asus RT-AC68, Netgear Nighthawk R7000, budget TRENDnet TEW-818DRU and our current favourite, the D-Link DIR-880L – but this is the first time we have seen it combined with an integrated modem.

In addition to this the 5363 packs Beamforming, four Gigabit Ethernet ports and support for WPS, WPA/WPA2 security and IPv6. One bizarre omission though is the lack of a USB port. With many routers having a pair of USB ports for networking printers and an external drive it is odd to see a feature even most ISP-supplied routers would provide being absent. For some this might even be a deal breaker.

USB aside the Zoom does fulfil the needs of most, though trouble reappears when it comes to the setup process. Having been used to the silky smooth browser-based setup wizards seen from the likes of Asus, Linksys, D-Link and Netgear setting up the 5363 was like being thrown back in time.

After connecting to the router no wizard is triggered, instead you manually type 198.168.0.1 into a browser and login with the default admin/admin username and password (a security no-no in 2014). Even then nothing happens. To configure the modem and wireless (the latter of which had its 5GHz band set to a channel which cannot be received in the UK) you must dig through each section of the UI and manually configure it. 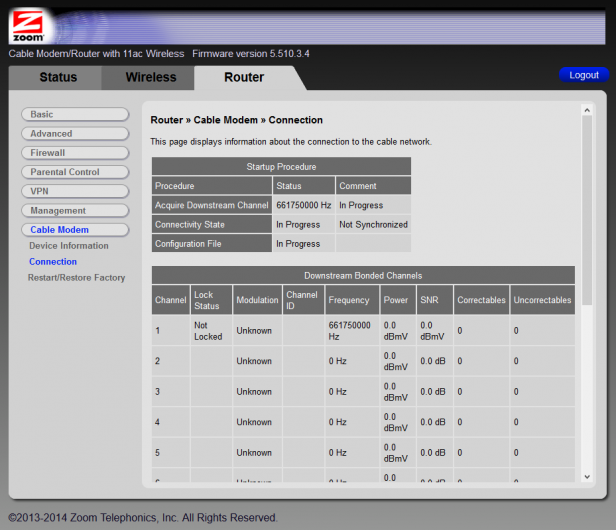 If this didn’t already scare away technophobes, the user interface will as it again looks like something from a bygone era. Advanced users will find their way around without much trouble, but the lack of any integrated help screens or plain language explanations for each section is lazy.