What is the Linksys WRT1900AC?

In short: the return of an icon. The WRTAC1900 pays homage to the WRT54G, the company’s best ever selling router, one whose design was so famous it represented ‘The Internet’ in the South Park episode Over Logging. The new arrival is also Linksys’ first router since the WRT54G to boast of support for the popular OpenWRT and DD-WRT open source firmware.

Furthermore, despite its obvious reverence for the WRT54G, the WRT1900AC is a leader in its own right packing a cutting edge AC1900 chipset and taking its place at the very top of Linksys’ product range. Yes that puts it a step above our current benchmark: the Linksys EA6900. All in all, there’s a lot to live up to. 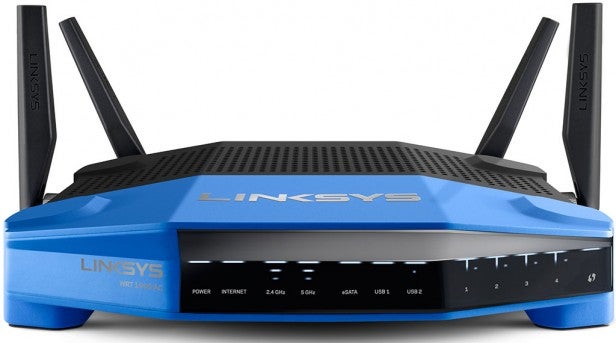 While the cues are deliberate, the WRT1900AC’s design is audacious in its own right and it won’t be to everyone’s taste. For starters it is a million miles away from the subtle grey and silver finish of Linksys’ ‘normal’ range and at 295 x 195 x 55mm (125mm including antennas) it has the largest footprint of any router we have reviewed. At 2.2Kg it is also one of the heaviest.

Still if you can convince your loved ones this behemoth deserves a place in your home you won’t be disappointed with the build quality. It may be plastic like every router on the market, but it feels rock solid. Its four upgradeable antennas are more sturdy than most and its thick rubber feet are slit so it can be wall mounted.

Interestingly Linksys has slapped a fan on the WRT1900AC, a move which has split enthusiasts. One side calls it responsible and hopes it will inspire rivals to follow suit, the other claims it is unnecessary, bringing an additional point of failure and will cause undue noise. We can see both viewpoints but are tempted to back the former as it offers a failsafe yet at no time did the fan come on during our testing so it is purely a failsafe. 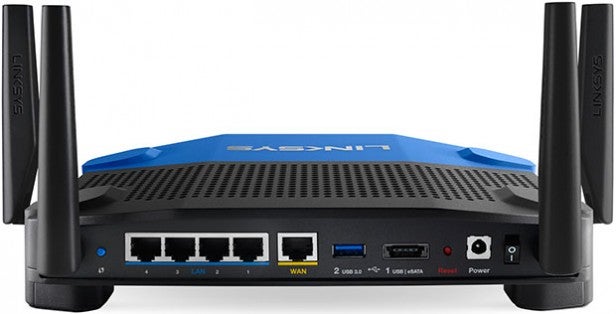 That isn’t the whole story though as all previous AC1900 routers have used a Broadcom chipset. Linksys isn’t giving away any details of the chipset at the heart of the WRT1900AC other than it is made by Marvell, but it claims there are performance benefits and it does pack a faster CPU. Consequently the router can brag of a dual core 1.2GHz CPU (verses 1GHz from Netgear and 800MHz from Asus and the Linksys EA6900, while the TRENDnet is single core) that should give it extra grunt for USB performance amongst other things. It also packs 256MB RAM and 128MB of flash like all its rivals, barring the cost cutting 128MB RAM and 16MB of flash on the TRENDnet.

Where Linksys has arguably missed a trick with such an enthusiast-focussed router, however, is in including just the standard four Gigabit Ethernet ports. At this level, and for such a large and heavy router, we’d expect more. It somewhat makes up for this with a USB/eSATA split port (the first we’ve seen) plus a USB 3.0 port.

Needless to say Gigabit WAN, WPS and WPA/WPA2 security are present as well as IPv6 and VPN support though the router can’t operate as a bridge. Bridge support is nice as when a router gets old and replaced it gives it a new least of life to expand signal around the home. 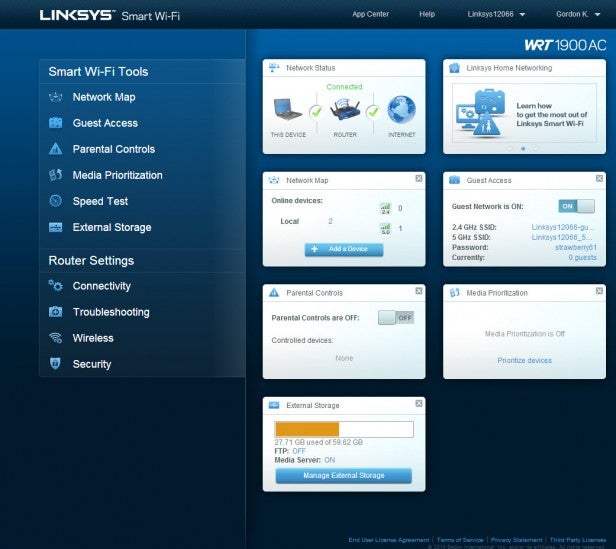 Given Linksys and Asus have led the way in router setups in recent years it is unsurprising that the WRTAC1900 takes mere minutes to get going. Plug the WRT1900AC in, connect to either of its open SSIDs (2.4GHz and 5GHz) and it automatically opens a page in your web browser and starts the setup wizard. Here you can set your wireless SSIDs, passwords and admin password. It should be the model for all going forward.

So too should Smart WiFi which remains unquestionably the most fully formed of the so-called ‘smart’ router platforms. It lets you access your router from any location and provides access to all its settings and management of connected devices. For those paranoid about security risks this remote functionality can be disabled, but the slick drag and drop dashboard remains and will fill even the most technophobic of users with confidence.

That said Linksys also realises the WRT1900AC will appeal to hardcore users and amongst them there is reverence for the OpenWRT and DD-WRT open source router UIs. As mentioned, Linksys claims the WRT1900AC is its first router to support both standards since the WRT54G, but at the time of publishing this review both developers say there are compatibility issues and neither recommends you install their firmware. We hope the situation will change soon.