This is Asus’ second 802.11ac router and follows the hugely successful RT-AC66U – the fastest wireless ac router we have tested, until now. Asus isn’t sitting on its laurels though, as the AC68U upgrades almost every aspect of its predecessor and there is a new design, chipset, upgraded processing power and the addition of a USB 3.0 port. To say our expectations are high would be an understatement.

The AC66U was the most aggressively styled router on the market, but it has now given up this dubious honour to the AC68U. At 220 x 160 x 83mm (310 x 160 x 83mm including removable antennas) the dimensions are only fractionally larger, but its 685g weight is nearly 200g heavier which hints at all the new hardware squeezed inside.

Despite this the most obvious difference between the two is their form factor. Whereas the AC66U lay flat with an optional vertical stand, Asus has now clearly decided the latter is the way to go and the AC68U only sits upright. This makes it highly noticeable in any room, but it does take up less space thanks to its reduced footprint.

Aside from this Asus has largely preserved the external appearance of its RT-AC series with the same tasteful textured finish that repels fingerprints and dust in equal measure. It is also very well-built with Tonka-toy durability and a thick rubber non-slip base which combine to make a router which is second only to the oh-so-stylish but oh-so-disappointing 2013 Apple AirPort Express. 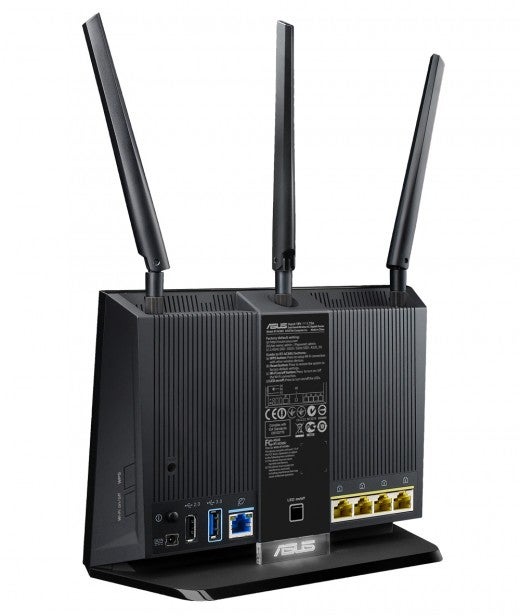 While there are a number of external differences between the AC68U and the AC66U they are nothing compared to the alterations inside.

The big news is the ‘AC1900’ reference in its rather verbose official title. No wireless ac router has managed to boast combined theoretical speeds of above 1750 megabit (comprised of 1300Mb/s wireless ac, plus 450Mb/s wireless n) but the AC68U achieves a supposed 1900 megabit thanks to a boost in its wireless n speeds to a theoretical 600Mbit. Yes theoretical bandwidths have little to do with reality, but we’ll take every bump we can get.

What causes the increase is a new chip, the Broadcom BCM4709, and its proprietary ‘TurboQAM’ technology. Interestingly TurboQAM primarily benefits the ageing 802.11n 2.4GHz band rather than 5GHz. TurboQAM compatible wireless adaptors (slowly rolling out onto the market) will benefit most, but it is said to aid all 802.11n 2.4GHz devices which is crucial for a band which is now looking long in the tooth.

Equally vital is AC68U’s greatly bolstered horsepower. It is the first router we know to feature a dual core processor (Arm Cortex A9 clocked at 800MHz) and carries a healthy 256MB of DDR3 RAM. This should help the router boot faster and better cache and buffer data under heavy loads. Vitally it should also help USB connected storage rates finally increase… and coincidentally the AC68U is the first Asus router to upgrade one of its two USB 2.0 ports to USB 3.0. 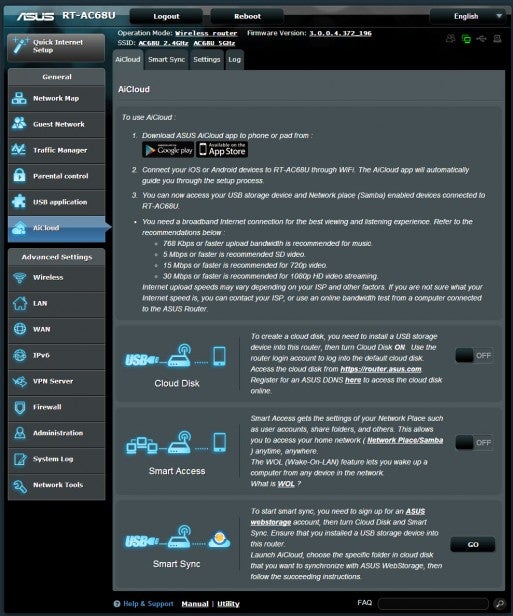 Elsewhere the AC68 ticks all the right boxes: amplified 3×3 antenna array, 4x Gigabit Ethernet ports, WPA/WPA2/WPS security, parental controls and DLNA and IPv6 support. Asus also plies the AC68U with the mass of additional functionality seen on the AC66U, including an integrated media server, VPN and ‘AiCloud’ – the company’s smart cloud service which allows users to access their network content remotely via a web browser or dedicated smartphone apps.

Lastly a welcome but simple touch is the addition of a physical LED on/off button. Given the AC68U has flashing blue LEDs for four Ethernet ports, Internet status, USB 3.0 and USB 2.0 connections, 2.4GHz and 5GHz wireless activity and power it is very welcome once you’re happily setup.