This is Linksys’ most important router of the year. It features an upgraded chipset enabling the company to tout ‘AC1900’ speeds and finally go head-to-head with Asus’ all conquering RT-AC68U. Linksys is going all out with the EA6900 adding external antennas for the first time in the series and, unusually, being very aggressive on price.

For those wanting uncompromised wireless performance could this be the new router to beat?

Out the box the EA6900 looks very similar to its predecessors, the EA4500, EA6500 and EA6700 but look closely and there are a couple of significant changes.

For Linksys itself, the most significant is its name is now front and centre on the router and spelt out in capitals. This is because Belkin has completed the purchase of Linksys from Cisco and Belkin, perhaps wisely, hasn’t plastered its logo on instead preferring to let the established Linksys brand do the talking. This makes sense given Belkin plans to continue its own branded routers and allow Linksys to operate without interference as its own unit.

As before the Linksys logo has a white light that flashes slowly to indicate booting, WPS is running or during firmware upgrades while it remains steady at all other times.

The second significant change is the aforementioned inclusion of three external antennas. This results in three screw fixings for the bundled antennas, but Linksys has still managed to cram in all the ports and buttons you’d expect (more below) including a power button missing from the US version because it is mandatory under EU rules.

From a design perspective what is most impressive is the EA6900 still looks great despite the addition of the antennas – an aspect which has always given Asus’ routers a more aggressive look. The build quality is rock solid and because it doesn’t switch to an upright form factor like most new AC routers it is still wall mountable, a deal maker for some. All in all it is a very nice looking product.

But looks are not where primary interest in the EA6900 will lie. The big news is its inclusion of the Broadcom BCM4708A chipset that brings ‘Turbo QAM’ – a proprietary technology that boosts theoretical 802.11n speeds from a previous maximum of 450Mbps to 600Mbps. This when combined with the 1300Mbps theoretical maximum of 802.11ac gives us the 1900Mbps figure also touted by the Asus RT-AC68U when other routers are stuck at 1750Mbps.

The obvious upside in this is the potential from Turbo QAM to give the older wireless n standard a useful kick, though compatible chipsets are thin on the ground at present with just the Asus PCE-AC68 currently aboard. That said, the Broadcom chipset claims to boost wireless n and wireless ac performance regardless and the chipset brings the same hefty jump in horsepower to the EA6900 that the RT-AC68U received. Namely a dual-core ARM Cortex A9 processor clocked at 800MHz, a healthy 256MB of DDR3 RAM and 128MB of flash storage.

Aside from this Linksys has integrated a small PCB into each of its amplified external antennas to add some additional logic to the Beamforming in the 802.11ac spec. Linksys has also started to build its own firmware stack giving it greater control over the chipsets it and other manufacturers licence. This is implemented through its Smart WiFi Cloud platform, which allows users to remotely monitor and control their router settings through any PC, tablet or smartphone with an Internet connection.

Crucially, security obsessed users no longer need a Smart WiFi account to use a Linksys router, but it offers a superb differentiator and remains by far the most fully realised Cloud router platform currently on the market. Slowly but surely third-party apps for Smart WiFi are growing too with parental control (Block the Bad Stuff), remote media access (HipPlay) and device monitoring (Device Monitoring!) apps particularly useful.

Elsewhere the EA6900 ticks all the right boxes. There are four Gigabit Ethernet ports, 2x USB (1x USB 2.0, 1x USB 3.0), support for IPv6, WPA/WPA2 and WPS security, Guest access and QOS. The antennas themselves can also be unscrewed and replaced with third party alternatives. 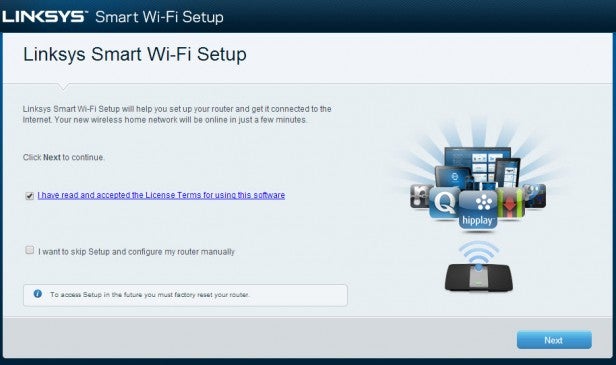 Asus, D-Link and Linksys have long been leagues apart from the rest when it comes to ease of setup and the EA6900 continues this fine tradition. Simply plug in the EA6900, connect it to your modem and whatever peripherals you want physically tethered and switch it on.

No password or CD is needed on the initial connection to the Linksys 2G and 5G SSIDs, but on first connection a new tab is automatically opened in your default browser. A wizard starts that lets you setup your router and wireless passwords (as well as changing their SSIDs) and detects your connection type (manual setup lets you specify any settings you want). After that you’re done. 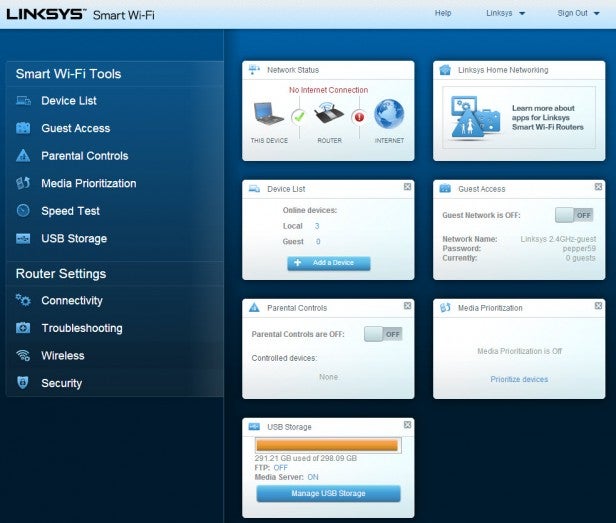 When it comes to managing the EA6900, Smart WiFi remains leaps and bounds ahead of the competition. It is a widget-based UI with drag and drop functionality that can be done from any location (or locally from 192.168.1.1 if you disable Smart WiFi) and you’d be hard pressed to find anyone it would confuse. D-Link’s mydlink and Asus’ ASUSWRT are also well laid out, but they are both getting long in the tooth and cannot compare to the Smart WiFi user interface at this point.