It comes with a barebones Gorilla Glass front with a metallic-finish frame. Round the back it has a raised backplate that covers all but the tip of the tablet’s long left side.

The backplate is slightly different to those seen on cheaper ZenPads. It’s not removable and is made of aluminium, as opposed to plastic. The lower left edge been also designed to feel like leather.

The combination of changes make the ZenPad S 8.0 feel more luxurious than most competing £200 tablets. If you handed me the Zenpad S 8.0 turned off I’d have guessed its pricing would be in line with Samsung’s £320 Galaxy Tab S2 8.0.

After accidentally sending the tablet flying across London Bridge Station’s floor I can also confirm the Zenpad S 8.0’s build quality is excellent. It didn’t suffer any bruises. 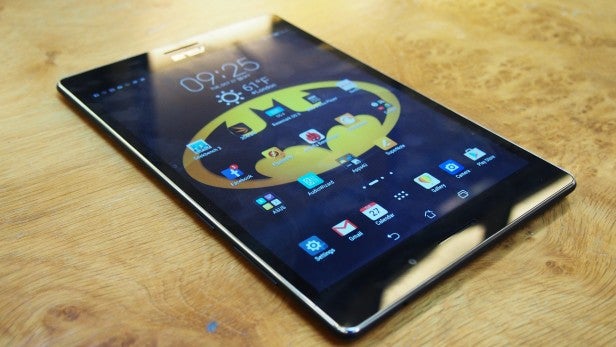 Asus has managed to load the ZenPad S 8.0’s tiny frame with a reasonable amount of hardware and ports. I’m particularly pleased to see the appearance of a USB Type-C port on the ZenPad S 8.0.

USB Type-C is set to become the new standard on most tablets and smartphones. It promises to radically speed up devices’ charge and data transfer speeds.

Asus has also added a microSD card slot that will let you upgrade the tablet’s 32GB of inbuilt space. But be warned, the reader only support cards with up to 64GB of SDXC storage.

The display is one of the sharpest I’ve seen on a £200 tablet and easily competes with significantly more expensive devices, such as the Nexus 9, which features a  8.9-inch IPS 1536 x 2048 display. The smaller size of the Asus means it’s slightly sharper while having the useful squarer 4:3 aspect ratio of an iPad.

In its out of the box setting the screen appears to be reasonably well calibrated. Colours look vibrant, without being overcooked and whites are wonderfully clean. Black levels aren’t quite as deep as they are on the competing Super AMOLED displays seen on Samsung Galaxy tablets, but are still solid.

Asus has also baked Active Pen support into the Zenpad S 8.0’s screen, which means those that want to can use a digital stylus to sketch or take notes on the tablet – though considering its small dimensions and the lack of decent digital painting suites on Android I can’t see many people bothering. 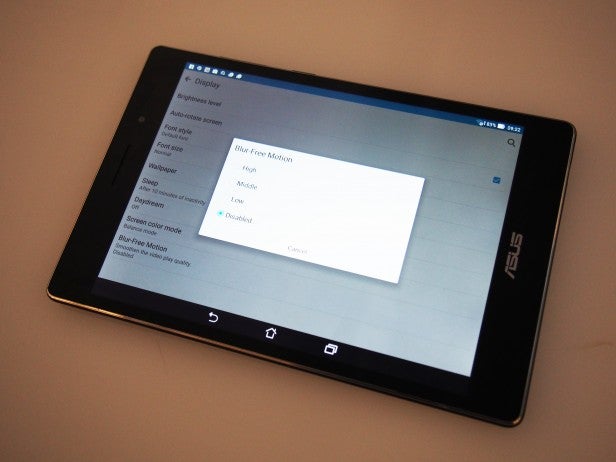 The screen also comes loaded with Asus Visual Master technology, which in my mind is a mixed bag that diminishes the display’s performance in certain situations.

Visual Master is a collection of Asus technologies designed to improve screen performance. The biggest additions are Asus Tru2Life+ and Intelligent Contrast.

The Tru2Life+ technology aims to optimise the screen to play videos with fast action by increasing the screen’s refresh rate.

Intelligent contrast enhancement aims to let the display offer “a 200% better contrast ratio”. It works by analysing and “optimising” each pixel in an image to better render highlights and shadows.

On paper the two bits of tech sound great, but in practice I found they’re pretty dire. The combination of technologies have a tendency to over sharpen videos being played on the  ZenPad S 8.0. The frame rate changes can also make character movements in TV shows and movies look slightly bizarre.

Watching a couple of episodes of That 70’s Show on Netflix, characters complexions were over saturated to the point they occasionally looked like Thunderbirds puppets – an issue compounded by the slightly disjointed movements the Tru2Life+ technology forced them to make.

Fortunately the technology is easy enough to turn off in the ZenPad S 8.0’s settings menu, so it’s not a complete deal breaker.