Asus pioneered the cheap Android tablet when it partnered with Google to create the 2012 Nexus 7. As a result, it’s no surprise it has continued to release a steady stream of affordable Android tablets ever since.

The 2015 Asus ZenPad 8.0 is its latest effort. However, while the low £119 price tag may make the ZenPad 8.0 sound like a bargain, Asus has cut a few too many corners this time. It won’t be remembered as fondly as the Nexus 7 was.

Budget tablets usually have notoriously dull designs. In general, any tablet – be it in Samsung’s Galaxy, Acer’s Iconia or Tesco’s Hudl series – that retails for less than £200 will feature a dull, cheap looking, design that is about as interesting to look at as a loading screen.

From the front the ZenPad 8.0 looks like Asus has done little to buck this trend. The tablet features a fairly unassuming Gorilla Glass coated screen that also has a slightly junky looking bezel. The fake “metal finish” plastic sides house volume and power buttons on the long right side, but those are the only physical controls.

The ZenPad 8.0’s back is a bit more interesting. The ZenPad 8.0 features a removable, textured, polycarbonate backplate – similar to that seen on the Asus MemoPad 7 – that covers all but the tip of the tablet’s long left side. 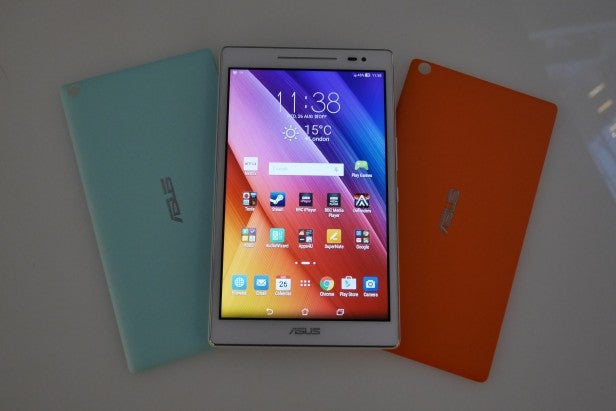 The slightly raised backplate gives the ZenPad an atypical look that separates it from other affordable tablets, such as the Tesco Hudl. It also lets users customise the ZenPad’s appearance. Asus is currently offering backplates in a variety of colours, each of which retails for £14.99.

While it’s nice that Asus is trying to improve its budget tablet’s visual allure, on a practical level, the design is a mixed bag. In hand, the backplate not only feels cheap, but also makes the ZenPad 8.0 slightly cumbersome to hold. This feeling isn’t helped by its chunky 209mm x 123mm x 8.5mm dimensions and hefty 350g weight.

This would be forgivable if the backplate had some practical value, like granting access to a removable battery. Sadly, it doesn’t. Removing the backplate only grants access to a microSD card slot and dock for the ZenPad’s optional Power Case, which adds a second back-up battery.

That said, the addition of a microSD is no bad thing and lets you add a further 64GB to the ZenPad 8.0’s internal 16GB of storage.

Asus has loaded the ZenPad 8.0 with a single front speaker with DTS HD Premium Sound that sits next to the tablet’s front camera on its top.

The single speaker isn’t terrible as things go. Watching Netflix, the speaker was suitably loud and clear. However, with music the speaker could sound slightly tinny and didn’t really have much low end – meaning bass heavy songs sound slightly weak and flat. 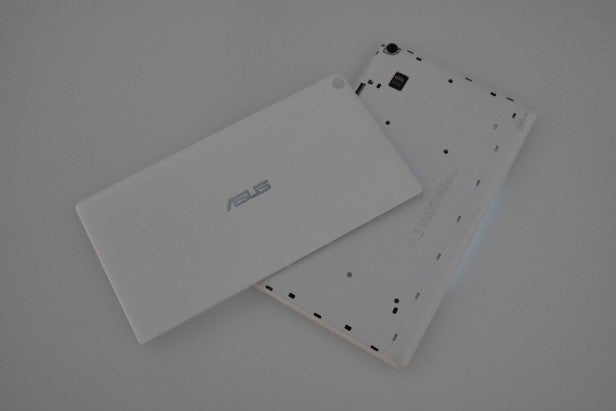 It also features an Advanced setting that lets you manually control the speaker’s volume, bass, treble and EQ. While the feature looks impressive, we found the settings didn’t make much of a difference to how the speaker performed and audio quality remained fairly average.

For audiophiles, Asus is offering an Audio Cover that adds six speakers to the ZenPad 8.0 for £69.99, but we weren’t sent one to test.