What is the YotaPhone 2?

The combination of phone and tablet has taken off in a big way with the likes of the Galaxy Note 4 and iPhone 6 Plus, so why not a phone and e-reader combo?

The original YotaPhone was an awkward mix of the two. Oddly shaped, expensive, unbalanced and just plain wrong, Russian maker Yota Devices went back to the drawing board. It’s returned with a much better phone that still doubles as an eBook reader thanks to a second screen on its back.

It’s frighteningly expensive at £550 – that’s more than at 16GB iPhone 6 – but the Android-toting YotaPhone 2 might just find its niche with book-lovers or those who value battery life.

You won’t find any metal on show in the YotaPhone 2’s design. It’s unapologetically plastic, though it’s plastic reinforced by glass fibre. It’s sturdy and solid, though, with an internal metal frame to enhance rigidity. In all other respects it’s austere as opposed to fashionable – more Moto G than HTC One M8. 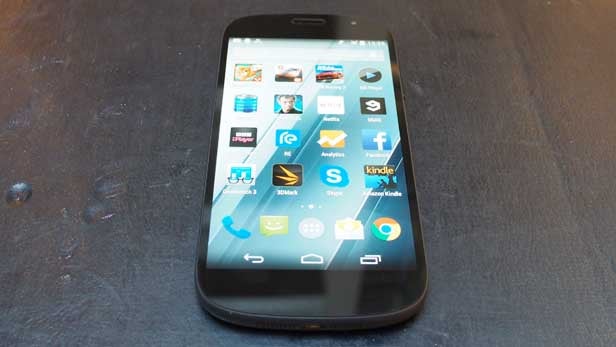 With good heft and balance it feels like a quality phone in your hand. The back curves and measures 9mm at its thickest point, much thinner than Motorola’s value handset but thicker than the Samsung Galaxy S5. It feels nicer than Samsung’s flagship, though. The soft swoops and arcs mean the YotaPhone 2 conforms to your hand so it isn’t hard to use one-handed – for a 5-inch phone, that is. It’s an accomplished design – miles better than the square, tapered first Yotaphone released earlier in the year.

Gorilla Glass 3 covers both the front and back, but the rear isn’t as slick as you’d expect. In fact we expected the YotaPhone 2 to be a slippery customer, but it’s easy to grip and keep hold of. One minor concern is a slight scratch we got on the rear after just one day of being in a pocket with another phone. This may have been a freak accident, though. We’ve not marked the phone in the days we’ve been using it since. 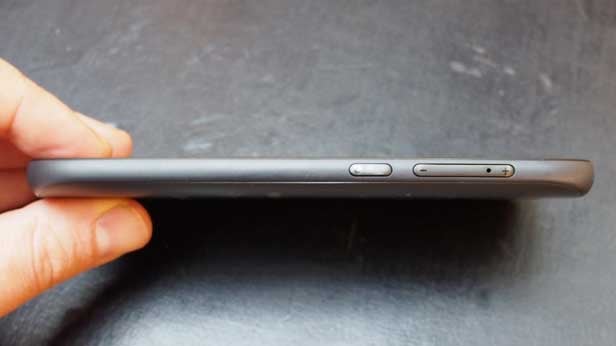 Unfortunately the buttons don’t quite live up to the rest of the phone. Located on the right edge, the plastic power button sits almost flush and doesn’t provide quite as much action as we’d like. The volume rocker doubles as the nano-SIM tray, but this makes it lift out further than the power button and also means it’s a little rattly. We’re being a bit picky – there’s nothing all that wrong with the buttons; we just hold high standards when reviewing phones that cost this much.

The curved back is where the YotaPhone becomes interesting. It houses a 4.7-inch touch-sensitive e-ink display that can work just like the front AMOLED screen.

The Full HD front display is very good indeed. The 442ppi pixel density means it’s pin-sharp, so it’s excellent for reading small text on websites or eBooks. AMOLED screen tech has come a long way since it was first introduced, and even since Samsung introduced it to its Galaxy range of phones. At first colours looked unnatural, and brightness not on par with the best LED screens out there. That’s all changed.

Brightness levels and colours are great on the YotaPhone 2, as is the infinite contrast ratio that’s the big advantage of an AMOLED display. Unlike LED phones, the YotaPhone 2 copes brilliantly with dark scenes in movies and TV shows. You’ll enjoy using the front display for catching up on last night’s telly on the way to work. 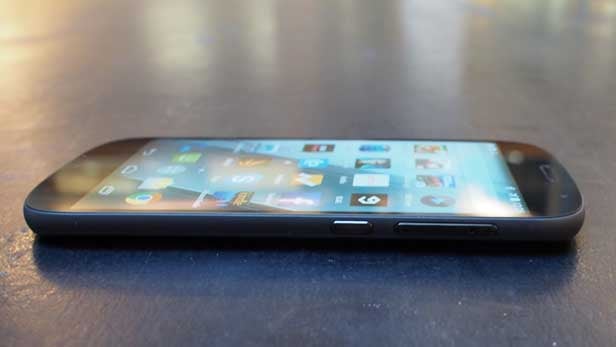 And that’s where the next feature of the YotaPhone 2 comes in handy. Having an e-ink display on a phone might feel like a luxury, and it is, but it’s one that you start to value after a few days of use. Once you get to grips with everything it can do, at least.

And it can do a lot. If you wanted to, you could use the rear screen to do everything the front screen can. You can even play games or watch videos. Fun though this adaptability is on the 4.7-inch 960 x 540 electronic paper display (EPD), the main benefits come from using it for reading, checking the odd message and conserving battery life.

Unlike LCD or AMOLED screens, EPDs are very energy efficient, because they don’t need any power to stay on. This is why eBook readers such as the Kindle Paperwhite can last as long as eight weeks without needing a charge. 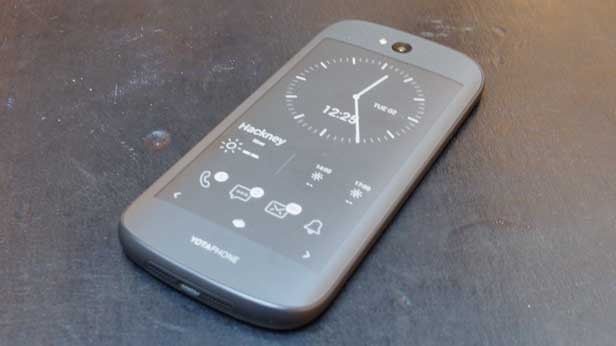 So the rear screen on the YotaPhone 2 is always on and you can make it display whatever takes your fancy. We found a homescreen comprising a clock, the weather and basic phone, message, email and alerts to be one of the handiest. It provides key information at a glance. Turning an AMOLED screen on often to check the time or the odd message uses up a lot of juice, so having the e-ink display always on is a real battery saver.

It’s unfortunate, then, that the YotaPhone 2’s EPD doesn’t match the quality of the front screen. Text looks a little washed out. It’s quite legible, but you’d rather have your favourite dog-eared paperback around. Still, there’s no problems reading texts or emails in good light. 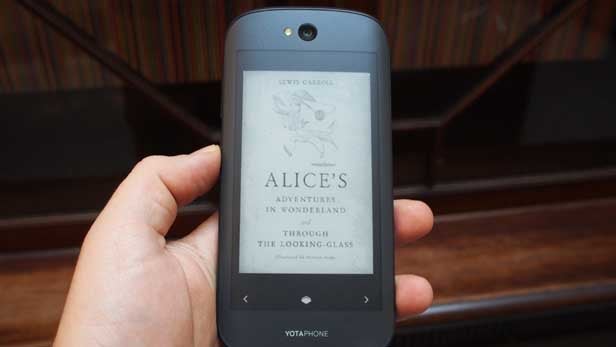 It’s when the skies darken a little that the EPD becomes unusable. The YotaPhone 2’s rear screen isn’t backlit, which means you won’t be able to make out a thing in lower light. The problem is exacerbated by the grainy text and grey background. You’ll be reaching for your Paperwhite or Nook Glowlight when the lights go dim on long-haul flights.

On the plus side, the rear screen is responsive. You can tap out messages using the touch-sensitive rear screen just like you can on the front. It’s not as slick, but does the job in a pinch.

The screens are a classic case of Jekyll and Hyde. The main screen is superb; at least as good as it’s flagship competitors. But the EPD disappoints. Dull, grainy and dark, it’s not awful, but is a big step back from the white, backlit and sharp screens on the best eBook readers on the market.

Two small speaker grilles flank the micro-USB port at the bottom of the YotaPhone 2. The speakers are both loud and clear enough to make them useful for watching the odd movie without the need of using the 3.5mm headphone jack at the top of the phone. There’s little distortion when whacked up to 11 and, while it doesn’t match the front-facing BoomSound speakers on the HTC One M8, it is better than the Galaxy S5.