What is the YotaPhone?

The YotaPhone is a 4.3-inch Android smartphone with a difference. Up front it has an LCD display and when you turn it around it has an e-ink display a bit like the one you’d find on an eReader like the Amazon Kindle.

If you are wondering what the beneifts are of having two screens, the Russian manufacturer behind the YotaPhone believes the two-screen phone will help improve overall battery life by transferring tasks like reading and viewing notifications to the less power-consuming e-ink screen – e-ink displays only consume power when changing image.

While it’s a refreshing to see a company outside the likes of Apple, Samsung and HTC try to do something really different, it’s disappointing that the YotaPhone doesn’t deliver despite all of its innovative promise. 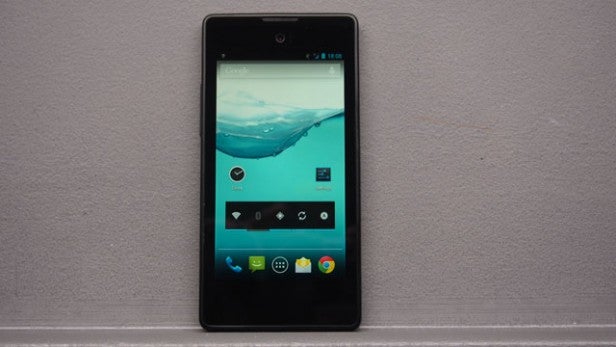 Two screens aside, the YotaPhone is a pretty plain-looking handset. It’s all black with a matte bezel on the e-ink side and a more glossy finish surrounding the LCD display. The bezels below the screens are noticeably thicker to accommodate the gesture-based controls, so there’s no physical or capacitive buttons to press here.

The chassis is not the slimmest, though far from thick either. Measuring in at 9.9mm it’s a smidgen thicker than the HTC One but slimmer than the Motorola Moto G, the latter of which is roughly the same weight – the YotaPhone weighs 146g. It’s a bizarre wedge of a handset as well where the thicker edge is actually at the top of the phone when you’d expect it to be at the bottom, with a gentle slope on the e-ink side of the phone.

Looking around the phone, the headphone jack sits up top alongside the microSIM card slot which also doubles as the on/off button. Over on the left is the volume rocker with the microUSB charging port on the bottom of the device. Sadly, there’s no microSD card slot to expand on the 32GB storage, something we know many phone users crave. 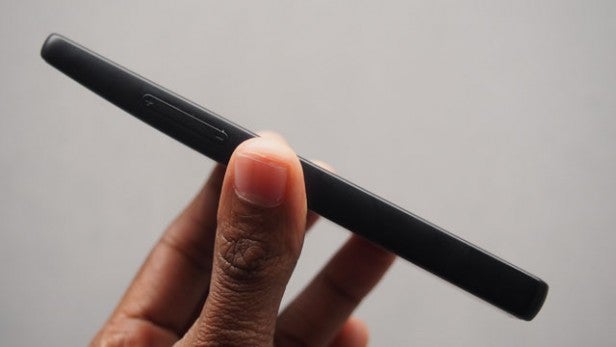 The most peculiar design decision is the positioning of the camera sensor. It sits on the back in the bottom right hand corner. Clearly this has been done to make room for the extra display and the gesture-based surface below. The problem is, when it comes to taking a photo your fingers will naturally cover the sensor so you’ll need to flip it around for portrait mode shots.

Despite some of its flaws, the YotaPhone is reassuring to hold and the e-ink surface doesn’t feel uncomfortable resting on the palm of your hand. When you consider that this is a phone that costs over £400 though, the direct 4.3-inch screen comparisons are the Sony Z1 Compact, which offers impressive build quality and waterproofing, and a number of cheaper options such as the Samsung Galaxy S4 Mini, HTC One Mini and the substantially cheaper Moto G. The latter in particular shows that you can make a high quality phone on the cheap and the YotaPhone in comparison is dull and uninspiring. With such an interesting concept it’s a shame that Yota didn’t decide to give it all an equally nice-looking home.

Up front, the YotaPhone has a 720p HD screen so it doesn’t match the likes of the Full HD screen-toting Samsung Galaxy S4 or the HTC One. When you consider that cheaper phones have similar quality screens, it’s not leaps and bounds ahead of the competition. It’s a solid performer, just not the best you’ll see.

Despite its lower specification, the 4.3-inch display squeezes in 341 pixels per inch which does give it a higher ppi count than the iPhone 5S and the Moto G and ensures text and images are nice and sharp. Overall brightness is good and colours are on the whole accurate although can look muted in places. It definitely lacks the punch and vividness of the S4 or the Xperia Z1 Compact. Unfortunately, it doesn’t include IPS display technology so viewing angles are not particularly great and it does suffer from glare outdoors.

That of course is where the e-ink display comes into play. The 4.3-inch e-ink display has a 640 x 360 resolution, which when compared to the Kindle Paperwhite that has a 1,024 x 768 resolution E-ink screen, doesn’t sound too impressive. The Paperwhite has a larger 6-inch screen of but the resolution for the YotaPhone doesn’t exactly make good reading. 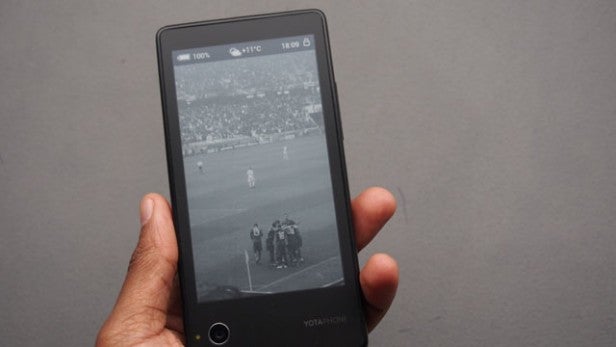 The contrast ratio – essentially the difference between the brightest and darkest elements – is not particularly fantastic leaving font looking grey and far from sharp. There’s no integrated light so viewing in the dark is a problem and it suffers from ghosting, whereby the image doesn’t fully change, leaving behind faded impressions of what came before. It does work well outdoors, but considering this is the YotaPhone’s key feature it’s riddled with issues.