Introduction
D-Link, Cisco/Linksys, Buffalo, Netgear, DrayTek, Billion, Solwise… the major players in the networking space have been the same for years. So why is a hard drive maker getting involved? The answer lies in looking beneath the surface…

Western Digital My Net N900 Central Features
The ‘My Net N900 Central’ is the flagship in Western Digital’s first router range and its ace in the hole is a WD speciality: storage. Yes it suddenly all makes sense because the Central is part router, part NAS and it comes in two size options 1TB and 2TB. Sell a router and WD sells a hard drive at the same time. 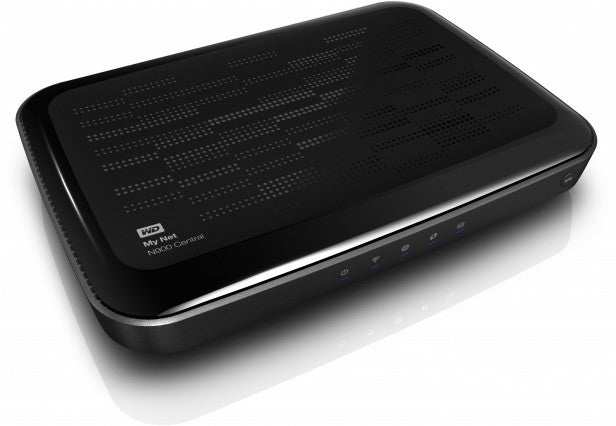 This is no cheap sales grab though because, much like the original WDTV, Western Digital has thought carefully about this product before launching it. As such a number of expected boxes are checked: simultaneous dual band 2.4GHz and 5GHz 802.11n wireless connectivity (rated at up to 450Mbit each, hence the ‘N900’ name), four Ethernet ports and USB for connecting a printer or even more additional storage.

In addition the internal hard drive offers automatic backup for any computer connected to the network and an extra party trick is ‘FasTrack’ – WD’s proprietary prioritising technology which aims to distribute bandwidth to entertainment needs such as streaming of audio, video or online gaming. Taking this a step further WD has created WD 2go, a ‘personal Cloud’, which gives Macs, PCs and smartphones (Android and iOS via WD 2go apps) access to the Central’s HDD multimedia content from any location with an Internet connection.

It is worth noting this isn’t a full blown rival to the Cloud Connect and mydlink platforms recently launched by Cisco and D-Link which also let you adjust your settings remotely, but on paper it should offer enough to keep media junkies happy. Less exciting, but just as important are the inclusion of IPv6 compatibility, WPS and WPA2 security, guest access and parental controls.

Western Digital My Net N900 Central Design
Given the HDD it is no surprise the Central is larger than your average router. It is relatively thin at 32mm, but the 244 x 170mm footprint is significant since it is only designed to sit flat meaning you’ll need to find desk space roughly similar to an 11-inch laptop.

For all its bulk we must admit the Central could be better looking too. We’ve seen some fairly radical tubular and glass router designs in the last 12 months, but the Central is a large, plastic, curved rectangle that feels cheap in hand. Build quality is reasonable and it doesn’t feel fragile, but we’d like to see more premium materials in successive generations.

Western Digital My Net N900 Central Setup
Despite the addition of the hard drive, we’re happy to report setting up the Central is no more difficult than an ordinary router. The simplest way to get up and running is to use the CD Western Digital provides, though we do wish more companies would drop the CD in favour of USB keys. The Wizard takes care of connection, password and SSID settings and enables the Central’s internal disk for use. The Central’s storage then shows up as a network drive on all connected computers and content can be added and removed as you would a local drive.

Customising settings is straightforward too as WD has come up with the most intuitive and graphically rich router UI we’ve seen away from Cisco’s Cloud Connect. Meanwhile the WD 2go Android app and iOS app are also well thought out, though Apple users are limited by the support of codecs with the app not converting incompatible file types on the fly and there is no gallery mode for pictures. That said content can be downloaded for offline viewing and a recent update enables WD 2go to be linked to Dropbox accounts to unify both NAS and true Cloud storage. 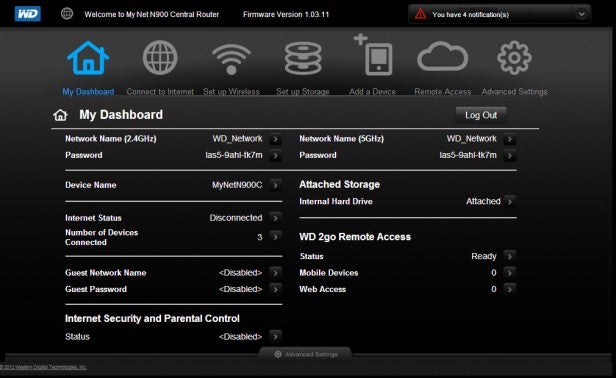 Western Digital My Net N900 Central Performance
So the Central is well featured and easy to setup and administer but no looker – how does it perform? The answer depends on what bands your equipment can support. If the majority of your laptops, tablets and phones are restricted to 2.4GHz Wi-Fi then we’d suggest you look elsewhere. At one metre, 10 metres, 10 metres with a wall in-between and 13 metres with two walls in-between we attained maximum speeds of just 7.03MB (56.2Mbit) per second, 5.74MB (45.9Mbit) per second, 4.78MB (38.24Mbit) per second and a measly 473KB (3.7Mbit) per second respectively.

On the flip side if you have newer 5GHz capable products the excitement should rise as we saw a near 30 per cent jump in all results and, most surprisingly given the distance problems usually associated with 5GHz, a big increase to 2.13MB (17.04Mbit) per second at the furthest distance. While the former figures leave it trailing the likes of the benchmark D-Link DIR-645 and Linksys EA4500, the 5GHz results are near enough a match.

Did FasTrack work? Largely yes. Obviously with a poor Wi-Fi signal at distance additional bandwidth cannot be grasped from thin air, but with a strong signal we were able to stream HD video smoothly while copying files across the network on the same band. FasTrack achieves this by actively monitoring the type of traffic on its network and when it detects media (including support for web services and websites like Skype, Netflix, Hulu Plus, VUDU, YouTube and Xbox LIVE) it actively throttles any other activity to keep the bandwidth open. Of course should you have dual band supporting hardware you can simply connect to the Central on different bands, but this is a fine compromise for those who don’t or live in a packed household.

Furthermore wired performance is strong. Copying to and from the Western Digital My Net N900 Central’s hard drive from a wired desktop PC achieved peak transfer rates of 19.4MB (155.2Mbit) per second and 15.1MB (120.8Mbit) per second. These figures can’t compete with dedicated NAS units which pack fast processors and RAM, but they are enough for backups to complete quickly (and an initial backup overnight) while it is no bottleneck to streaming even high bitrate 1080p content.

Western Digital My Net N900 Central Value
So is the Western Digital My Net N900 Central worth buying? For Mac users a big rival is the Apple Time Capsule which at £249 for 2TB costs the same as the 1TB edition of the Central (2TB is £299) and similarly packs dual band wireless. Then again the Central is equally happy on Mac and PC and searching online you will find it significantly discounted whereas Apple’s RRPs are locked in stone. 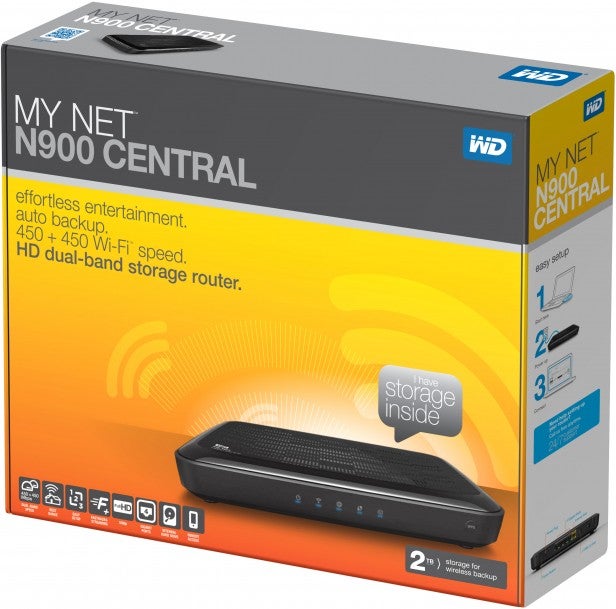 The second question is whether the inclusion of the internal drive is worth the extra investment. Obviously it is far cheaper than buying a separate router and dedicated NAS, but since it does not aim to compete with a fully featured NAS a fairer comparison would be with a router plus external storage. Here WD itself makes a strong argument for the latter with its ‘My Net N900’ – a version of the Central without the internal storage – which retails for £150 and offers no less than seven Ethernet and two USB ports, both of which can connect external drives. Likewise most other routers can also be bought for under £150 and currently a 2TB external drive costs under £90). So yes there is a premium for convenience and it is worth noting the drive inside the Central is fixed, but those looking for the tidiest solution will still be persuaded.

Lastly we come to the elephant in the room, however, 802.11ac. We have already been blown away by the performance of the ac capable Buffalo AirStation 1750 which we found roughly tripled 802.11n performance in real life scenarios and it carries little premium above existing 802.11n equipment. More ac routers from other major manufacturers will arrive throughout the rest of the year and with that in mind, we’d be waiting for an ac version of the Central before making such a large investment. 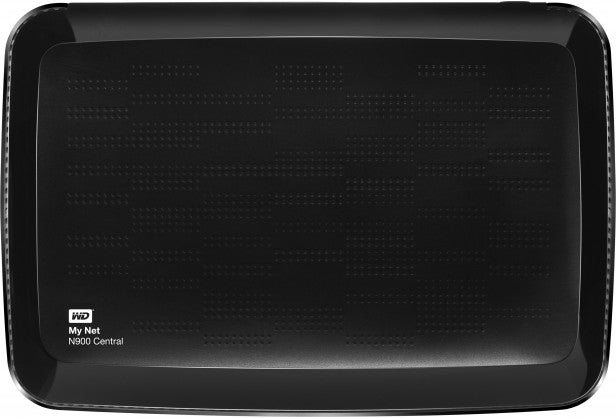 Western Digital My Net N900 Central Verdict
Western Digital has made a solid entrance into the router market. The My Net N900 Central may not be the most attractive router you’ll see and its 2.4GHz performance is nothing special, but its 5GHz speeds are excellent and its integrated storage makes it a wonderfully simple NAS. The mobile apps are good too offering quick access to media from any location.

The problem is pricing. Both 1TB and 2TB models are more expensive than buying your own choice of router and connecting equivalent external storage and the drive inside the Central is fixed ruling out future upgrades. Furthermore north of £250 is a big investment with 802.11ac routers hitting shelves now. We’d suggest waiting for a next generation My Net N900 Central which will inevitably include it.