Like it or not, the future of watching films at home looks likely to be streaming. With this in mind, over the next few weeks we’re going to look in depth at all the main players in this new video business, before rounding up the results into a handy digestible guide.

We’ve actually done a head to head between Netflix vs Lovefilm before, back in March. But things have changed a lot since then, especially where LoveFilm is concerned, and it’s high time we spent more time with both these platforms and their main rivals.And we’re kicking the process off today with the newest kid on the video streaming block, Netflix.

Any Americans stumbling across this review will probably wonder what the heck we’re talking about here, as Netflix has been a major player in the US for ages. However, it only launched in the UK in January – but since then it’s had a major impact on what had previously been a rather small streaming world dominated by Amazon-owned LoveFilm.

For instance, Netflix’s aggressive £5.99 a month price forced a pretty much immediate price cut from LoveFilm, while the major advertising campaigns both companies launched are still running now, giving vastly more exposure to this once niche content field.

Wide availability
Despite its newness, Netflix is already available across an impressively wide array of platforms. The Xbox 360, the PS3, almost all brands of Smart TV, PCs, Macs, mobiles and tablets can all be used for accessing Netflix content.

Also impressive is how well the interfaces for all these different platforms work. The onscreen graphics carry the same visual identity – key for branding – and all generally try to make the most of the different platform technologies. The tablet and Smart TV interfaces are particularly impressive, working speedily and slickly.

Predictive search
Also commendable is the search utility carried by all the Netflix interfaces. This starts to filter titles from the first letter you type in, whittling the title list down with each extra letter you input. This is a much better approach than only starting to look for stuff once you’ve input a text field in full and pressed enter.

We also really like the look of the Netflix menus. The use of big, bold, colourful ‘DVD covers’ for all the films and TV shows available immediately draws you in and keeps you browsing the film ‘shelves’ for much longer than you would with a less attractive front end. 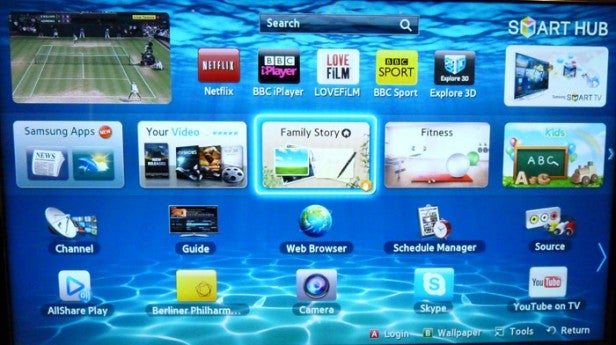 The genre breakdown approach used by the Netflix menus proves a pretty sensible way of organising the available titles, too.

Another great user-friendly touch of the Netflix interface is the way it tracks any viewing progress you may have made with a title even if you switch devices. So, for instance, if you start watching a film on an iPad and then decide you want to finish it through a games console, when you fire up the Netflix ‘app’ on the second (or third, or fourth, etc!) device, you get the option to resume the title you’d started at the point you left it, rather than having to play it from the beginning again.

Interface limitation
There is a practical price to pay for the attractiveness of the Netflix interface, though. For no matter what platform you use it on, the large size of the title icons means that you can’t see many titles on your screen at any one time. This makes it hard for Netflix to ‘promote’ as much new and high profile content on its home screen as both it and we would like. And it makes browsing a little more longwinded than we’d like too.

If you’re using Netflix on a TV, computer or HD games console, one of Netflix’s biggest attractions is the fact that many of its titles are available in HD. When Netflix launched, it was actually the only streaming service offering truly substantial amounts of HD content, with LoveFilm not then offering any at all. LoveFilm has since introduced a limited amount of HD via some of its platforms, but Netflix is still ahead in terms of the proportion of HD video ‘versions’ of titles it’s got available.

Multichannel audio
Netflix is also to be commended for making 5.1 channel audio available with a few of its titles. Sadly 5.1 mixes are only currently available on a rather small percentage of the service’s available titles, and there doesn’t seem to be any obvious thought process behind which films get it and which don’t. For instance, many A-list titles don’t have it, while some distinctly c-list titles do. But still, the fact that you can get HD films with 5.1 audio at all via streaming shows a greater sign of technical ambition from Netflix than you currently get with any other streaming platform. 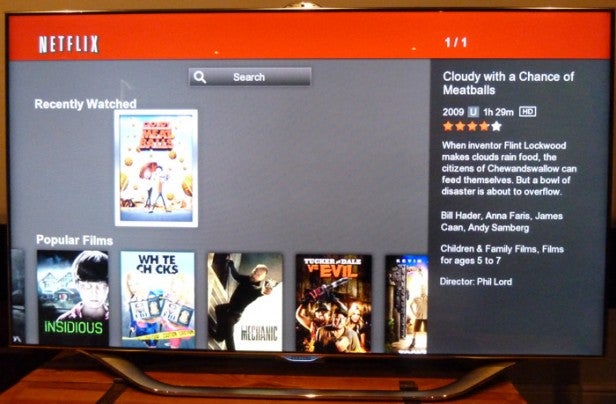 Almost every film that doesn’t get a Dolby Digital 5.1 mix gets a Dolby Pro-Logic surround sound mix instead – which compares very handily to the bizarre situation with LoveFilm, where titles only appear to have stereo mixes (or at least that was the case the last time we checked. We’ll obviously check this again during our upcoming review).

Quality AV experience
The fact that Netflix’s platform can handle HD video and 5.1 audio streaming implies that there’s some seriously high-level infrastructure behind the Netflix service. But more importantly, of course, the system’s data-shifting capacities promise that you’ll get a premium level of AV quality from the service. And for the most part, this proves to be very much the case.

We deliberately tested the service on a ‘national average’ 6Mbps broadband input (from BT if you care about such things). And Netflix consistently left us feeling extremely satisfied with the quality of the fare on offer, as both the HD and standard def picture quality comfortably exceeded our expectations. 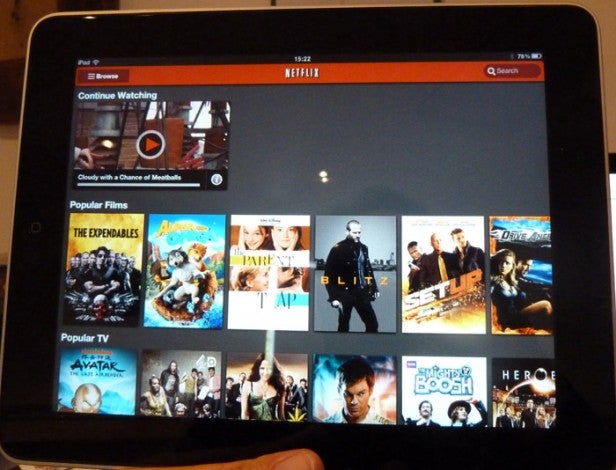 With HD, for instance, there seems to be pretty much the same amount of detail and sharpness on show that you get with the best-quality HD broadcasts on the Freeview HD platform. In fact, at times images look slightly better than that in that there seems to be less noise in Netflix’s image, be it dot fizzing or even, more surprisingly, MPEG compression blocking or shimmering noise.

Action is not a problem
Even action-packed sequences don’t seem to cause Netflix’s ‘engine’ any problems, with minimal judder and seldom any perceptible increase in compression artefacts.

A further plus to Netflix’s presentation of films finds the service very consistent when it comes to preserving the correct aspect ratios of the titles in its library. This can leave images looking a touch small, we guess, if you’re watching a 2.35:1-ratio film on, say, an iPad. But for movie fans it’s a far preferable approach to the reformatting some rival platforms indulge in.

Standard definition films obviously look softer and less detailed than HD ones. But they’re still very watchable indeed, often looking nearer the high quality of a good DVD than the ropey quality of a poor Freeview broadcast. More importantly, they look considerably cleaner and more consistent than the standard def streams of most other online platforms.

As for the sound quality of all the films we tried, again the quality is high. The 5.1 mixes available sounded to our ears to be more or less identical to the same mixes found on Blu-rays of the same films, and while the Pro-Logic mixes obviously lack the dynamics and effects steering accuracy of the 5.1 mixes they still sound immersive and ‘unclipped’.

Excellent streaming stability
It’s not just the quality of the Netflix AV experience that impresses, either; it’s also its stability. Aside from a 10 second or so delay right at the start while films buffer up, we suffered no more than a couple of tiny stutters throughout many hours of streaming across all of the available Netflix platforms. 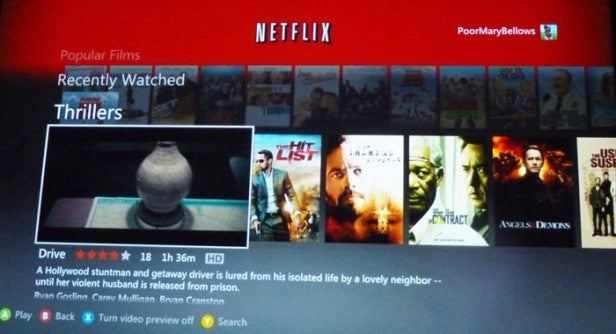 Even when we tried introducing other online burdens to our 6MB broadband pipe such as surfing the web on a separate laptop, the Netflix streams remained remarkably stable, marginally downgrading their quality ‘on the fly’ when necessary rather than descending into stuttering – which would, of course, be much more annoying.

More content please!
For all Netflix’s feature and quality strengths, though, it currently suffers from one major flaw. Namely that its library doesn’t contain nearly as many films and, to a lesser extent, TV shows as its LoveFilm rival. This was fairly apparent at the service’s launch, but it’s become more exaggerated in the past couple of months as LoveFilm has signed up more exclusive film studio deals while Netflix has signed up strikingly little new content to shout about.

To be fair, Netflix has a few exclusive deals of its own, and for us seems to be particularly strong when it comes to good quality TV shows. But nonetheless it’s the content area where Netflix needs to focus most of its efforts now that it seems to have the technical side of things so well sorted.

Verdict
In these days where HD viewing is the rule rather than the exception, we found ourselves surprisingly impressed, even enthused by the amount and quality of HD content Netflix is capable of delivering. We also loved the way you can ‘track’ playback of titles across multiple devices, and really appreciated the way the £5.99 a month subscription gets you everything Netflix has to offer, with no extra payments required.

Netflix’s current relative shortage of content is its biggest weakness. But no rival platforms are in any way comprehensive in movie terms either, so we suspect many AV fans will be content to live with this flaw in return for Netflix’s superior AV standards.