It’s not often we’re truly gobsmacked. While we see a fair number of outstanding products grace the pages of our site, most of them have been talked about so much prior to us actually seeing them that there’s little left to surprise us. There are exceptions, like when we all first actually used an iPhone and saw quite how stunning an interface it employs but more often than not we know what’s coming. Not so with the product I’m looking at today.


While attending a seemingly innocuous product launch event towards the tail end of October, out of the blue the world’s second largest hard drive manufacturer, Western Digital, announced and demonstrated its WD TV and in doing so, brought the room to a standstill. Not only was it surprising to have a hard drive manufacturer release a multimedia playback device but it was even more surprising to see that it was actually a very good one. A couple of weeks later and not only do we have one to review but you can already buy them in the shops. So over the next couple of pages I’m going to explain exactly why many of you should be adding this little box to your Christmas wish list.


The Western Digital WD TV HD Media Player (to give it it’s full title), then, couldn’t be a simpler device. It’s a little black box that plugs into your TV and can be used to play audio and video, or view images straight from your USB storage devices (i.e. portable hard drives, or USB thumb drives). You control it using a little remote control and it has some simple onscreen menus to let you navigate your way round your media. All of which sounds rather familiar. However, while we’ve come across all sorts of variations on the ‘getting my multimedia stored on my computer to play on my living room TV’ theme, this is the first that has taken such a simple and effective approach.


Other devices use a network connection to stream your multimedia so require a certain degree of potentially confusing setup and also require your remote storage device to be constantly on. Not to mention that few of them have wowed us with regards quality. 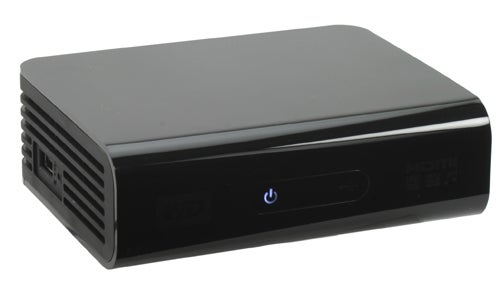 Another option is to get a Media Center PC that not only plays all your media but can store it and even be used as a PVR. However, Media Center PCs are expensive to buy ready made and require a significant amount of time and effort to self-make and when all is said and done, you may seldom ever bother to actually use its myriad of features.


A third option would be a laptop with an HDMI output but this is hardly an elegant solution and it can often be a pig to get working properly. 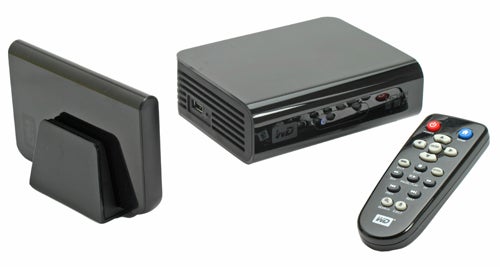 With the WD TV, Western Digital has quite rightly taken the opinion that it’s often easier just to turn on your main computer copy whatever it is you want to watch or listen to onto a USB stick and just plug that stick into a box next to your TV. What’s more, many people store their entire multimedia collection on a portable hard drive so being able to just plug this in and go is incredibly convenient. Not to mention that if a friend is coming over and they want to show you some holiday snaps or a home video they can just bring a USB stick or even plug their camcorder/camera straight into the WD TV and switch it to mass storage mode. The WD TV doesn’t care what it’s reading, so long as it’s a mass storage USB device, it’ll give it a go.

In the box you get the WD TV itself, the power supply, the remote (including two AAA batteries), a composite cable, and a little stand for holding the Western Digital Passport portable hard drive that WD expects you will buy to use in conjunction with the WD TV. In reality, though, it’s just a piece of plastic that you can use to hold whatever drive you like.


One notable omission is an HDMI cable, which is essential for playing back any HD content and just generally for not relying on the awful picture that composite will provide. While this is understandable considering the still relatively high price, and bulk, of HDMI cables, but it’s still a tad annoying. 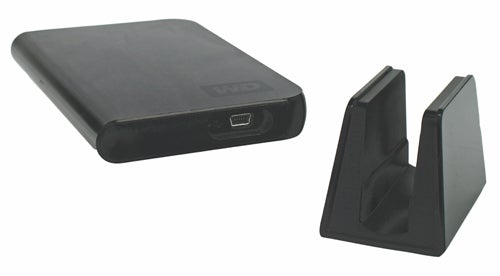 One of the WD TV’s headline features is its comprehensive file format support, which really is among the most impressive we’ve ever encountered. For brevity, here’s the full list as it currently stands:


And Western Digital says it will provide updates for future formats.


Quite simply no other stand alone device we’ve seen offers such comprehensive format support. What’s more all the video formats can be played back at up to 1080p resolution. The only thing that’s lacking is support for DRM’d files as these need to ‘phone home’ over the Internet to be authenticated.


To test this claimed support we plugged in a hard drive loaded with video clips, songs and images stored in all sorts of different formats. Among others there were some 1080p trailers recorded in the h.264 codec and .mov format and some 720p mkv files which used the Xvid codec. There were also some FLAC audio files as well as MP3 and we had a whole load of JPG, GIF, and PNG images of varying sizes.


The WD TV played or showed all the files without so much as breaking a sweat and even the 1080p trailers loaded in just a second or two – we could even fast forward through them.

Quality was also surprisingly good. It lacks the sophisticated video enhancements of dedicated high-end Blu-ray/DVD players like the Pioneer LX70, which iron out resolution artefacts like aliasing and other unwanted effects that result from employing Telecine. Nevertheless it was quite striking how pleasurable it was to sit and watch video, though as always we’d recommend steering clear of the composite output and stick to HDMI. Listening to music was equally enjoyable especially when piped out to a proper receiver that’s hooked up to a decent sound system.


There’s also a slideshow mode that will automatically cycle through your photos according to a time delay that can be changed in the menu. Music can also be played in the background while you’re viewing them, photos can be rotated and you can zoom into them to get a closer look.

Essentially, it does all the things the press release says it will and it does them well. But what really makes the whole experience so nice is how slick and simple the menus and library interface are to use.


When you plug in a storage device, the unit will automatically scan it for multimedia and automatically add the files to its library, which is split up into video, audio, and image. Videos and images can be viewed in order of date, filename, and recently viewed. Meanwhile audio can be navigated by artist, album, track name, date, and folder. What’s more, if you add a second storage device it amalgamates the contents of both devices into one library and you can view files as thumbnails or in a list. It’s seamless, quick, and superbly easy to use. Though you can turn off library mode and just navigate by device, folder, and filename. 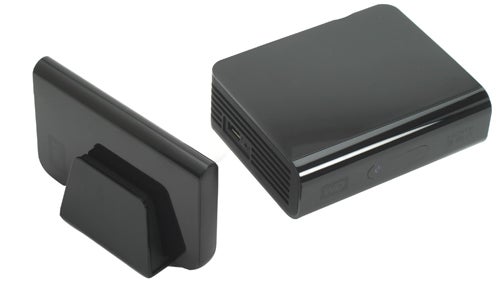 There is one problem though. While you can browse music by artist or album, you can’t whittle down your selection by artist >> album >> track number. Instead, selecting an artist will just take you to a list of all the songs by that artist listed in alphabetical order. Likewise, selecting an album will show all the tracks in alphabetical order. This is very frustrating if you just want to listen to a single album in the order it’s supposed to go in. It’s certainly not a deal breaker but it’s something we’d strongly suggest WD gets onto fixing in its first firmware update.


There is a search option if browsing your way through all those menus doesn’t take your fancy. It’s quite effective though it does, of course, rely on you keeping your files organised with appropriate, and correctly spelt, names. Also, given you have to navigate your way round a virtual keyboard using the basic remote, we seldom found ourselves bothering. 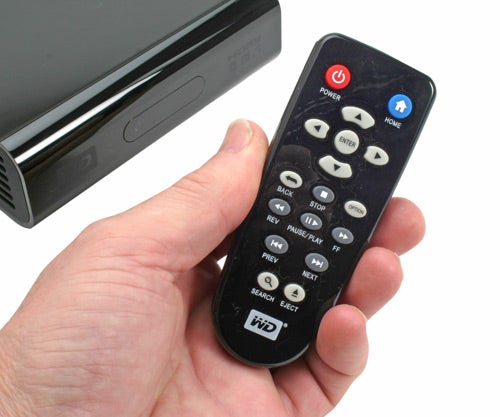 Despite this fact, the remote is actually perfectly adequate. All the buttons you could need are there and they’re logically laid out but most importantly the combination of the responsive buttons and fast-reacting menus means you never find yourself in that annoying situation where you’re not sure if you’ve actually pressed a button so you press it again and end up going passed the option you wanted – a problem these sorts of devices often exhibit.


Ultimately, what really lead to our jaws hitting the floor was not that Western Digital could create such a great device but that it would charge such a modest price for it. At just £80, this thing is so cheap as to almost be a commodity.


If you’re the type of person that has a comprehensive digital media collection and that doesn’t already have a fancy media centre setup with networked storage and the like, the Western Digital WD TV HD Media Player should be right at the top of your Christmas list. There’s simply no cheaper or easier way to get your media onto your TV.