Available on Xbox 360, Xbox One, PS3, PS4 (reviewed), PC
Can any game handle this much anticipation? Ever since its announcement at E3 in June two years ago, Watch Dogs has been tipped as the game to define the new console generation.

Just think about it: even before there was a new console generation, Watch Dogs was the game that would define it.

The hype pitched it as a wonder game; an incredibly ambitious open-world action game with a hacker hero who defied every limit. The engine would recreate a modern-day Chicago with a level of detail previous games could never muster. Watch Dogs was going to be the game that made the Xbox One or PS4 worth having.

If that’s your yardstick, then Watch Dogs falls slightly short of the mark. It’s a huge and still very ambitious game that often dazzles with its graphics and the sheer amount of detail.

If we scored game by weight – by the accumulated mass of content, systems, textures, architecture and technical prowess – then it would be right up there with GTA 5 as the best game ever made. Yet Watch Dogs is more a very good open-world game than an absolute classic. It isn’t going to redefine the genre.

Let’s not go crazy: we’re not in first Assassin’s Creed territory, with an amazing setting spoilt by humdrum gameplay. If anything, Watch Dogs has too much gameplay to throw your way.

There’s a lengthy story with innumerable twists and turns, where Aiden Pierce’s quest to find out who’s responsible for a family tragedy turns into a battle against an array of sinister forces.

On top of this you have a huge range of side-quests, which might see you halting criminal convoys with every means at your disposal, tackling targets for your allies or simply intervening in crimes in progress then chasing down the perpetrator (Aiden is very much a Robin Hood kind of guy).

We also get a range of more left-field activities, ranging from chess to bizarre augmented reality games and checkpoint races. Even if there were only one thing to be said for Watch Dogs, you’re definitely never short of things to do. 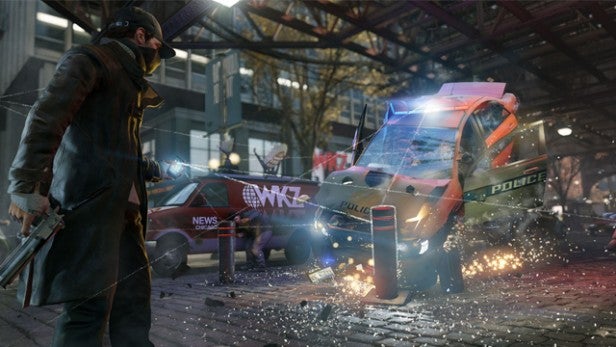 Meanwhile, Aiden has a pretty extensive set of tools with which to work his mischief. He’s good with cars, good with stealth and good with guns, and the game functions perfectly well as a cover-based shooter in the Uncharted mold.

Add his smartphone, however, and he becomes a lot more powerful, capable of blacking out the immediate area around him, causing bridges to open and traffic lights to change, and even causing electrical junction boxes or the grenades some guards are carrying to explode.

Best of all, he can root his way into CCTV networks, using the cameras to watch what’s going on from all kinds of angle, and even hacking into servers and security systems from this remote vantage point. 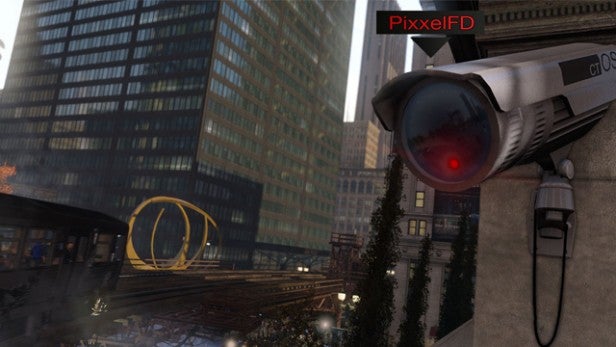 The development team has clearly put a lot of thought into how this should all work, and the controls are both sophisticated and surprisingly intuitive. Occasionally you’ll find yourself hacking or triggering the wrong thing as your smartphone ‘profiler’ reticule moves around, but for the most part any effect is only a tap of a button away.

What’s more, Aiden has a ‘focus’ ability, which slows down time and gives you an advantage in car chases or gun battles. We can’t say enough how critical this is. If you’re finding Watch Dogs hard – and you will at times – then it’s nearly always because you’re not using focus enough.

There is also room to specialise in a particular play style, through a straightforward skill tree where you can add points to your combat, driving, crafting or hacking capabilities. If you want to focus on making Aiden a killing machine, you can, but if you want to make him into a smartphone-packing, network-hacking techno-demigod, then that’s fine too. 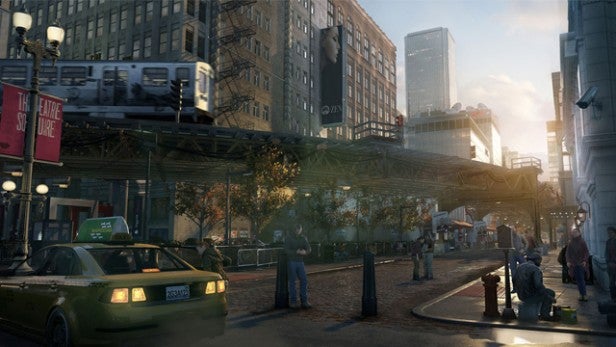 The visuals and presentation are frequently breathtaking. In dry, evening conditions Chicago doesn’t always look that staggering, but when the lights come on and the rain effects kick in, or you’re out in the city’s urban spaces on a sunny day, the results are incredibly convincing. Barring the Seattle of inFamous: Second Son, it’s hard to think of anything comparable.

The one thing that lets it down is the animation of Aiden and the other cast members. The clothes, bodies and faces are incredibly detailed, but the animation seems stilted and the expressions are unconvincing. It’s a long way behind Assassin’s Creed 4: Black Flag in this regard, and that wasn’t exactly state-of-the-art compared to Beyond: Two Souls or The Last of Us. 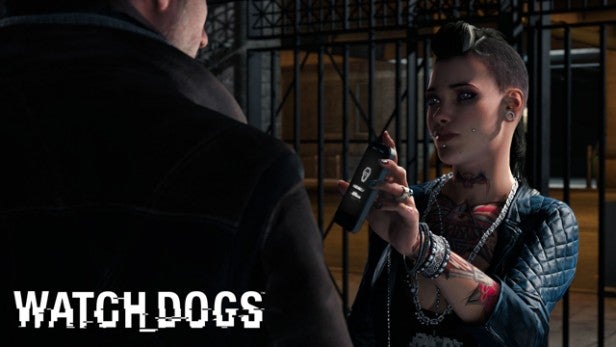 We will say and say again that Watch Dogs is a very good game indeed. However, it’s missing something at its core. Partly it’s a matter of the storyline. Aiden himself isn’t a particularly engaging hero, and his motivation is straight from the late-era Liam Neeson action movie school of plot design. There are stand-out moments, but it doesn’t grip throughout.

Nor is the mission design always that inspired. Again, there are some exceptional efforts that throw you a curveball or put you right on the edge of your seat, but too many go down the ‘go here, hack this, escape from here’ route, or push Aiden into the kind of role where you’d expect to see less sophisticated crims in a Saint’s Row or GTA.

There’s also a weird obsession with setting up big firefights, as if tension and suspense are no replacement for action. In theory, you can avoid the lengthy gun battles by using your hacking skills or making a quick escape, but in practice we found it nearly impossible to flee an area without a dozen guards/enforces/cops in hot pursuit, and once they’re on your tail they’re almost impossible to escape. 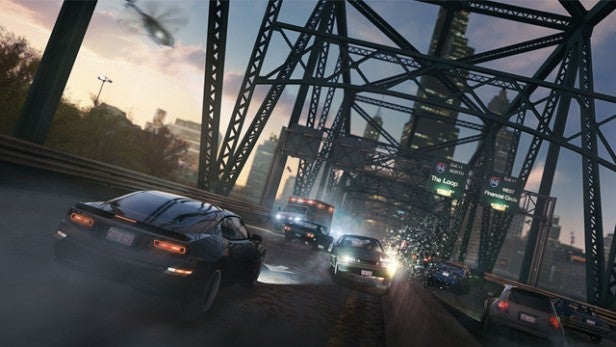 When the game insists on finishing many missions on a drawn out action sequence, this soon gets annoying. It’s frustrating to smoothly work your way through a prison, for example, barely raising an alarm, only to spend the next hour trying to outrun a vast cop car and helicopter pursuit, with Aiden dying over and over again.

Your mileage may vary here, and it’s possible that a different set of skills or a different approach would make the whole thing much, much easier. There’s certainly scope to try different things with electronic ambushes and clever use of grenades, explosives and exploding and steam-gushing props. Yet the game’s penchant for hardcore action creates a weird clash between the gritty, techno-thriller focus of the story and the legions of dead cops, smashed cars and bombed-out streets you leave in your wake.

Let’s face it, if you pulled this stuff off in real life you wouldn’t be walking the streets just a few hours later. You’d be in custody or the morgue. Aiden? He just keeps his head low and wanders round, with just a few gasps of ‘there’s the vigilante’ to remind you who he is. 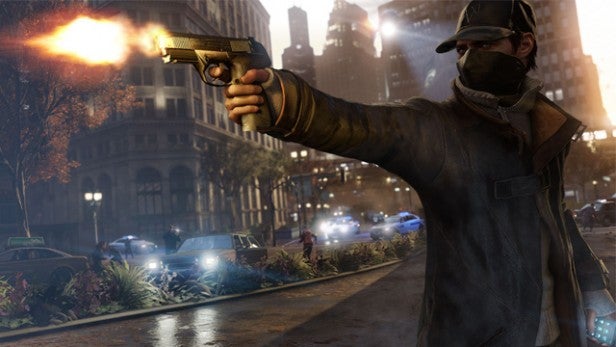 This might be unfair. We expect open world games to be fun, not credible, and Watch Dogs is rarely less than a blast. Yet where a GTA or a Saint’s Row can function on a satirical level, Watch Dogs’ more serious tone makes it a harder sell.

For all that infiltrating buildings, camera by camera and distraction by distraction, is incredibly thrilling, and for all that speeding through the streets or backwoods roads with the cops in your wake will raise your pulse, Watch Dogs doesn’t quite pull you in like GTA 5.

The online multiplayer features show a little more imagination. Two modes beam you into another player’s game so that you can tail and observe them or attempt to hack their data. The clever bit is that you must do so without getting spotted. Get caught out, and they can turn the tables on you, forcing you to escape. 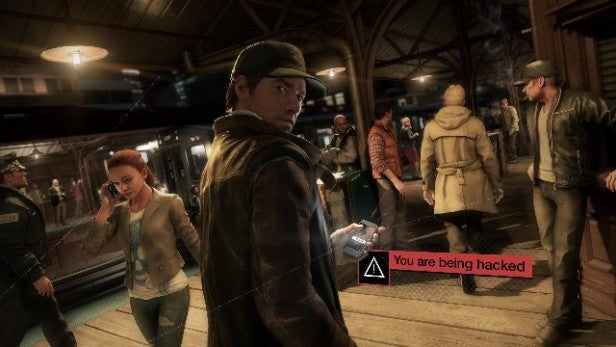 Otherwise we get a race mode and a more conventional mode called Decryption, where two teams of players fight it out over a file, each attempting to steal and decrypt it before the other gang. Finally, CTOS Mobile Mode works with Watch Dogs’ own companion app, so you can interact live with other players from your tablet or smartphone, calling in law enforcement to make their lives more difficult.

Again, you can’t fault Ubisoft for effort, but the online modes aren’t entirely successful. The hacking and tailing challenges have a great cat and mouse dynamic, but sometimes you’ll find yourself spawned somewhere where you can’t get near your target, or in a spot where you immediately stick out like a sore thumb – you’ll get spotted in seconds. 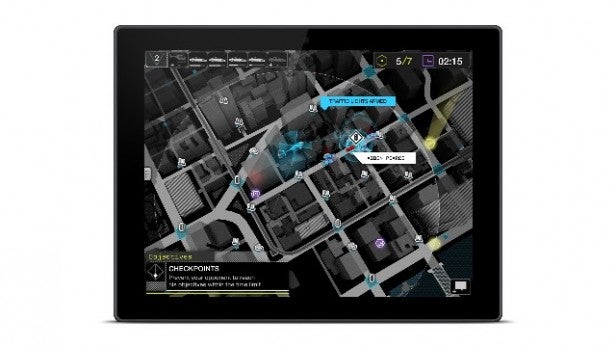 There’s a lot of potential in CTOS Mobile Mode. The tap, drag and drop interface for moving your helicopter around and calling in reinforcements works well, and it’s a clever way to play the game without actually playing the game. However, getting a match going is a hit and miss affair, with more emphasis on the miss than on the hit. It works better if you’re playing with an existing friend, but if you rely on the Quick Match option you could be in for a long wait.

Oddly enough, then, the most successful modes are the most prosaic. Racing is fun because Watch Dogs’ car physics and the layout of the Chicago courses makes it fun, and because you can use your hacking abilities a bit like Mario Kart power-ups. Decryption games, meanwhile, tend to outstay their welcome, but there is a lot of entertaining mayhem to be found, with players literally piling into each other in their vehicles or tearing up the scenery in pitched fun battles. All the same, do you really need another game that does this kind of thing?

Watch Dogs is a very good game – and occasionally a great one – but not a landmark game or any sort of classic. It’s a fine open-world game with a fantastically detailed setting, and one you’ll happily play for weeks. In fact, with a good thirty to forty hours of content, that’s probably what it’s going to take.

Yet, beyond the eye-candy and the sheer amount of stuff on offer, it doesn’t do enough to raise the bar. We can heartily recommend it and encourage you to play it, but if you’re looking for the game to define a generation, your search might go on a little longer.