It’s taken just over five months and now we finally have a PS4 exclusive that is the almost perfect showcase for Sony’s current gen console. It might not be a system seller in the way that Titanfall for the Xbox One is, but it makes a significantly greater impression than Knack or Killzone: Shadow Fall did as PS4 launch titles.

Developer Sucker Punch is not calling inFamous: Second Son a reboot but a new protagonist, gorgeous new location and new powers suggests otherwise. Core elements remain like the morality system and being able to parkour your way around the city that still make it an altogether familiar experience.

Cole MacGrath and his electrical powers are gone though, replaced by a younger superhero in the making. Delsin Rowe is a twenty-something tagger, casually dressed in denim, flannel shirt and red beanie. A member of the Native American Akomish tribe, Rowe lives in the shadow of his clearly much-loved local deputy brother Reggie whose face is plastered on billboards.

Troy Baker (whose voice acting credits include Joel from the Last of Us) puts in a fine performance as Delsin giving him the kind of roguish charm that Cole certainly lacked. The voice casting on the whole impresses and the excellent facial mapping brings a great cinematic quality to the cut-scenes.

What happened in the previous games, and specifically inFamous 2, shape the events in Second Son. Set seven years after the fallout in New Morais, the oppressive Department of Unified Protection (D.U.P) is still attempting to lock up the Conduits or as they are known to their captors, the bio-terrorists.

Delsin is experiencing a life without purpose until an accident changes everything and he discovers he can absorb the powers of Conduits. It also grants him the power to see into their lives, fuelling his ambition to protect the people with superhero powers but his rebellious instincts give him an insatiable hunger to gain more new powers to have fun with. There’s smoke, neon and a whole lot more. We won’t spoil it by listing them in detail but they are guaranteed to make the slick combat more fun and getting around the city a breeze. 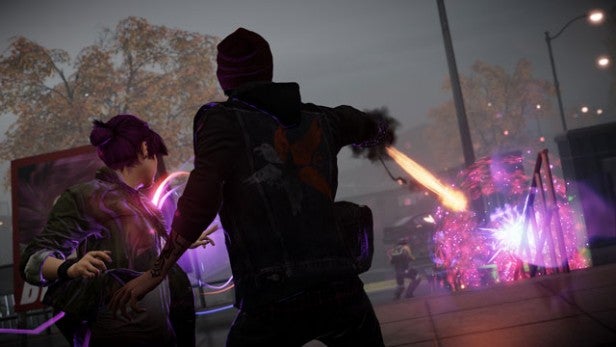 Powers need to be developed and with little time on his hands, Delsin needs to soak up power shards stored in AR Drone-looking surveillance cameras that float around the city or by dismantling core relays. The only problem is that these relays are dotted around the city in D.U.P territory and you’ll need to flush them out first before soaking up the shards.

You’ll also get access to an upgrade system where you can increase your powers or add new moves to make combat up close or from a distance more varied.

The choice whether to take the Heroic or Ruthless path will affect the moves you can unlock, so if you want to experience them all, it’s an extra incentive to give Second Son another playthrough choosing the alternate path.

Handily, there’s a power bar in the bottom right corner that lets you know when you’re running low on juice. It’s usually pretty easy to roam the rooftops to find a chimney top to suck smoke from, or snatch the neon from a nearby street sign. 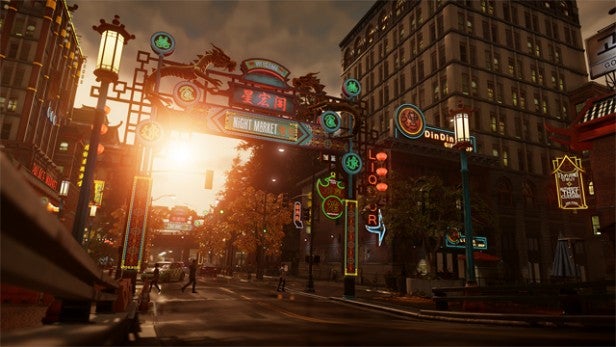 You will definitely want to roam as well. It a large part of the fun you can have in Second Son and a testament to Sucker Punch for creating such a wide open world where only the forested areas outside of the city are really off limits.

The Second Son world isn’t quite GTA 5 big, but it’s still impressively grand enough to want to explore every inch. Modelled on Seattle, the city closest to the developer HQ, the two-part landscape is separated by a river and if you climb up to the highest points you can appreciate how much detail and work has gone into to it – it’s quite stunning.

If you thought Killzone: Shadow Fall raised the bar for dynamic use of lighting, Second Son smashes it to pieces. Whether it’s the glare as you look up into the sky or the early evening sun that pierces through the gaps in high-rise buildings, this world looks every bit part of a next-generation game. Even when drenched in darkness, the neon billboards help create that gritty, urban feel of a city. 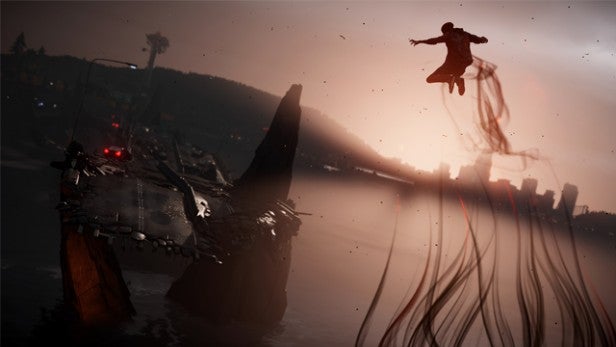 Not only is there clear appreciation of the PS4’s extra graphical capabilities but Sucker Punch is the first to fully embrace the DualShock 4 controller. Touchpad, speaker, light bar and haptic feedback all play their part.

Soaking up power shards is amplified through the controller, the touchpad can be swiped to open up Conduit holding pens. Perhaps best of all, you can use the controller as a spray can to tag the side of buildings and walls. Tilt the DualShock 4 controller vertically, you’ll have to shake the controller to mimic shaking the can and hit R2 to spray through the stencils. It’s a nice touch and adds to the more playful nature and tone of Second Son.

The morality system has always been a fundamental part of inFamous and in Second Son you’ll be faced with making decisions. Whether it’s choosing to corrupt or save a conduit or execute a surrendering D.U.P soldier, it will affect your good and bad karma altering the arc of your story.

Whether it dramatically changes events or some of the outcomes we’re not entirely convinced. Playing through both heroic and ruthless stories, we still encountered many of the same bosses and felt like we were moving to the same conclusion. Basically, if you were hoping for Heavy Rain-style decisions with drastic storyline consequences you might be a little disappointed. 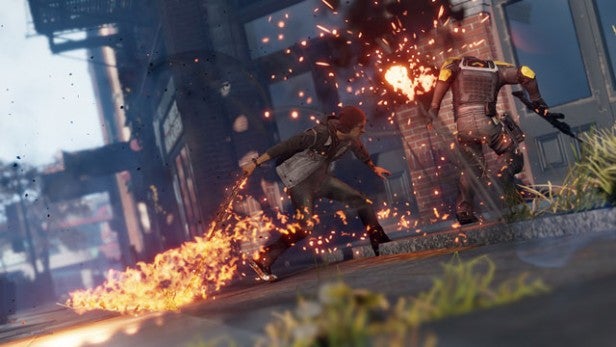 The story should offer you around 10-11 hours from start to finish. Tackle the heroic and ruthless arcs and you can double that. The storyline is nicely paced and doesn’t try to force you through the story too quickly.

Those who were eager to get it on pre-order get the added bonus of the Cole Legacy DLC as well, which will extend that playtime.

Bosses might not be Kessler from inFamous frustrating, but you can expect to die more than a few times trying to defeat most of them. They’re definitely not as taxing to work out how to beat and staying alive is made easier with some of the powers you’ll acquire later in the game. 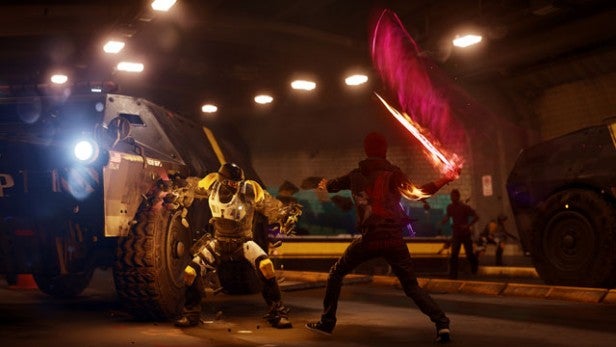 Our advice is that if you reach a critically condition, run away for long enough and it doesn’t take long for your life to be restored. Even jumping into the water simply places you back on land with life intact and the boss energy bar still at the same level, unlike when your powers were electric-based in previous inFamous titles.

One of the more disappointing aspects of the game is that the side missions seem a little undercooked. Saying that, you will definitely spend plenty of time just going around destroying D.U.P territories or taking our drug dealers if you adopt the squeaky clean hero option.

Seeing those towers collapse into a heap taking out D.U.P officers in the process is definitely one of the most satisfying things to do.

InFamous Second Son is our first true example of what a great PS4 game should look like. The world is stunning, it’s slick and polished and the gameplay is a whole lot of fun. The morality system still needs work but with a big city to destroy, it’s easy to forget about that. If you are planning to buy a PS4, Second Son should definitely be the first game to add into the shopping basket alongside it.